This last week of August has been very hectic beginning with a fleece sorting class last Saturday and Sunday. I signed up months ago for this class and was eagerly looking forward to it. It was a bit of a hassle since I had to get up early and drive over an hour to get to Magical Farms where the class was held. Ruth Elvestad, of Olds College in Canada was the instructor. She has had 35 years of experience judging, handling and teaching about fiber and fleece. I came away from the two-day class with so much information and a lot more confidence when I look at and talk about fleece. Someday I want to take the next step up and become a certified fleece sorter. 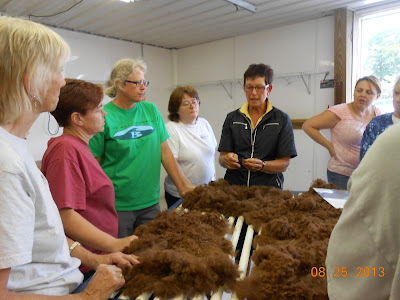 I also met a group of talented, (knitters, weavers, spinners, etc.) like-minded women at the class. I so enjoyed talking with all of them. My two tablemates, Susan and Kathy, and I shared personal experiences and many laughs as we learned. One of the group members is collecting e-mail addresses and other information to compile a contact list for us. I look forward to receiving that so that I can follow up on the activities of some of the women and their farms. 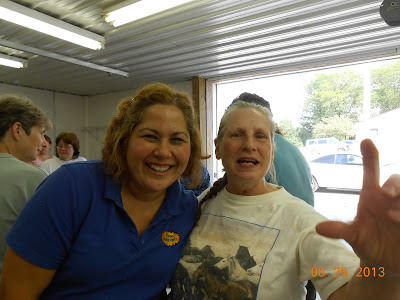 ﻿On Monday of this week I began teaching a class at a local, small, private university. I am teaching a freshman level rhetoric and composition class and after only two days in class it has been an eye opener. So far, most of the young men and women in the class seem eager to learn. In spite of a few minor glitches, e.g. a computer that won't seem to connect with the overhead projector and students who misunderstood the syllabus, I think that the experience will be a positive one.

And now to the reason for the title, "Oops!"  After a month and upon closer inspection, it seems that the little girl cria, Asteri, is actually Asterius! Rich was working in the pasture earlier, filling water buckets, checking on our very pregnant Firenze, etc. He always likes to get up close and personal with the animals. Here he is having an up close and personal conversation the the females, Firenze, Mango, Took, and Leezza, and our little one. 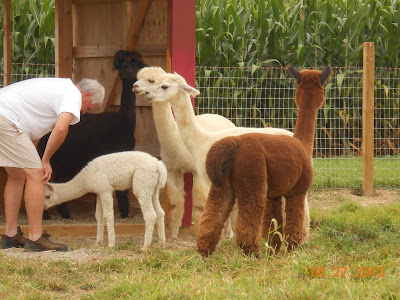 Today he checked out Firenze and she is showing definite signs of the impending birth. However, according to all of the "experts" these signs could mean that she will give birth today, tomorrow or anytime in the next two weeks or so. Any of us who has ever been pregnant herself, understands this. Rich doesn't. Anyway, a short while ago, as we were sitting in our living room watching the Ohio State football game, Go Buckeyes!, Rich asked me if we were certain that Asteri was a girl. Huh? As the picture above shows, most of the time Asteri is right in your face because she is so curious. Today Rich got a little closer to her rear end than she usually allows and he saw what he thought might be the development of two very little essential male parts.

Curiosity got the better of me and I went out into the pasture to investigate for myself, an easy task this time since all of the girls were in their condo in front of the fan. As luck would have it, Mango and Leezza were in front and left immediately. Firenze was next in line and actually let me touch her side. Whatever is in there is very active. She left the building and Took and Asteri remained laying in front of the fan. Took reluctantly got up and sauntered outside leaving me with the little one. I cornered the baby and grabbed her around the neck with my left arm and lifted her tail with my right. Sure enough it seemed that the baby was developing two little noogies! I pulled her right leg aside to look closer underneath. I even had to run my hand along her undercarriage before I found the "other" nubbin. We had looked under her on the day of her birth and the umbilicus was "bloody" obvious but we hadn't seen or felt anything else. I guess we were so excited to have our first cria born on the farm that we just weren't as careful as we should have been and since then we just operated on the assumption that it was a she. Rich had picked the baby up frequently to weigh it but hadn't tipped it upside down to check closer. The cria was nursing and growing steadily and was nearly impossible to catch in the pasture. So it seems that Mango has a little brother. Asteri is  now Asterius, ruler of the stars.
Posted by Buckeye Star Alpacas at 12:50 PM