Take Me To The Fair! 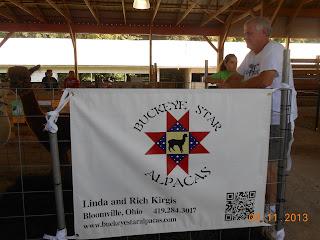 Thanks to my brother, Jim, for making the awesome banner.﻿

With a goal of leaving the farm at 7:30 this morning, Rich and I strode confidently to the pasture where he had the truck and horse trailer lined up at the gate. We've loaded the animals into the trailer before with no problem and were sure we wouldn't have any problems today. We easily cornered Leezza and Mango and haltered them up and led them to the gate. Mango has been a little difficult lately, kushing during training sessions when she didn't want to walk up the ramp or jump over the low bar. We've learned not to pull on the lead but to lure her with a scoop full of sweet feed. So today we were prepared with a scoop in hand and had every reason to believe that the process would go smoothly.

If there's one thing we've learned since the girls came to live with us in October, it's to expect the unexpected and today was no exception.  First, both Leezza and Mango refused to walk out of the gate. With a little coaxing and sweet talking, Leezza did walk hesitantly through the gate. I led her in a small circle through the familiar area where her practice course had been set up and then to the rear of the trailer. I would like to report that she hopped right in but that was not the case. She stopped short, her shins touching the rim of the trailer and refused to go any farther. I got into the trailer and tried to persuade her to follow. No such luck.

Meanwhile, Rich had lured Mango through the gate and up to the trailer beside Leezza. Mango, following Leezza's lead, also stopped short of jumping in. Both animals turned their heads and looked at each other nose to nose.

It was as if Mango was asking, "Are you going to get in there?"
Leezza seemed to reply, "No way!"
And I'm sure Mango said, "Me neither."

So there we were at 7:20 in a deadlock with two stubborn animals. Rich took Leezza and tried circling the area again. Approaching the trailer at a run, he hopped in and again, Leezza stopped short. All the while, I had been trying to lure Mango in with the scoop of sweet feed an inch from her reach. I'd let her have a mouthful and then slowly pull back the scoop, hoping to fool her into the trailer with me. At one point she even had one foot on the edge as if to come on in. But she didn't.

After 30 minutes, Rich, who was getting a bit impatient, to put it mildly, asked me to hold both leads. I did. He got out of the trailer and grasping Leezza around her chest behind her front legs, he hoisted her up into the trailer. Before she could react he grabbed her hind quarters and lifted them up and followed her into the cavity of the trailer. Success! We hooked Leezza to an anchor in the side wall. Rich quickly jumped out, grabbed Mango with his arms entirely around her body and before she knew what happened he had lifted her bodily into the trailer, slammed the back door and locked it, and then came to the side door to help me out. At 7:45 we were on our way. 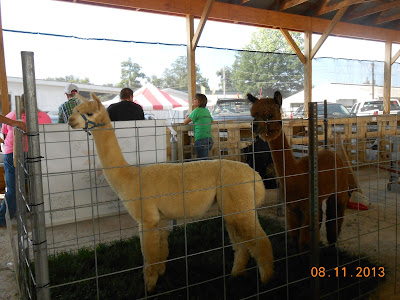 We had no problems at the other end of the line and they are now happily ensconced in their pen in the turkey barn. They are the only alpacas to be shown at the fair this year and I would like to think that they are the reigning princesses. The evoked a lot of curiosity from several little children at the fair and both Mango and Leezza are just as curious about all the new sights and sounds around them. 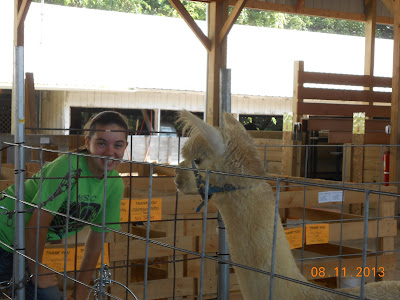 We will be going up to the fair several evenings this week  but for now, Pressley is in charge and I know she will be taking very good care of our girls.
Posted by Buckeye Star Alpacas at 10:20 AM