"Just start writing! Say anything." The quotations marks are intentional because for almost 20 years that's what I told seventh graders almost every day when they whined that they didn't know what to write. That's how writers combat writer's block and that's what I have had for the past two weeks. So today, I write.

The weather has been so lovely after the unusually severe winter and late spring that we in Ohio (and almost everyone in the country) have experienced this year. When we released the alpaca mamas and little boys
from their confinement in the barnyard and out into the bigger grassy pasture they were almost ecstatic. They paused only slightly, gazing in wonder at green expanse before them and then set forth into the pasture proceeding to do what they do best, eating! It made me smile to see them so obviously happy. 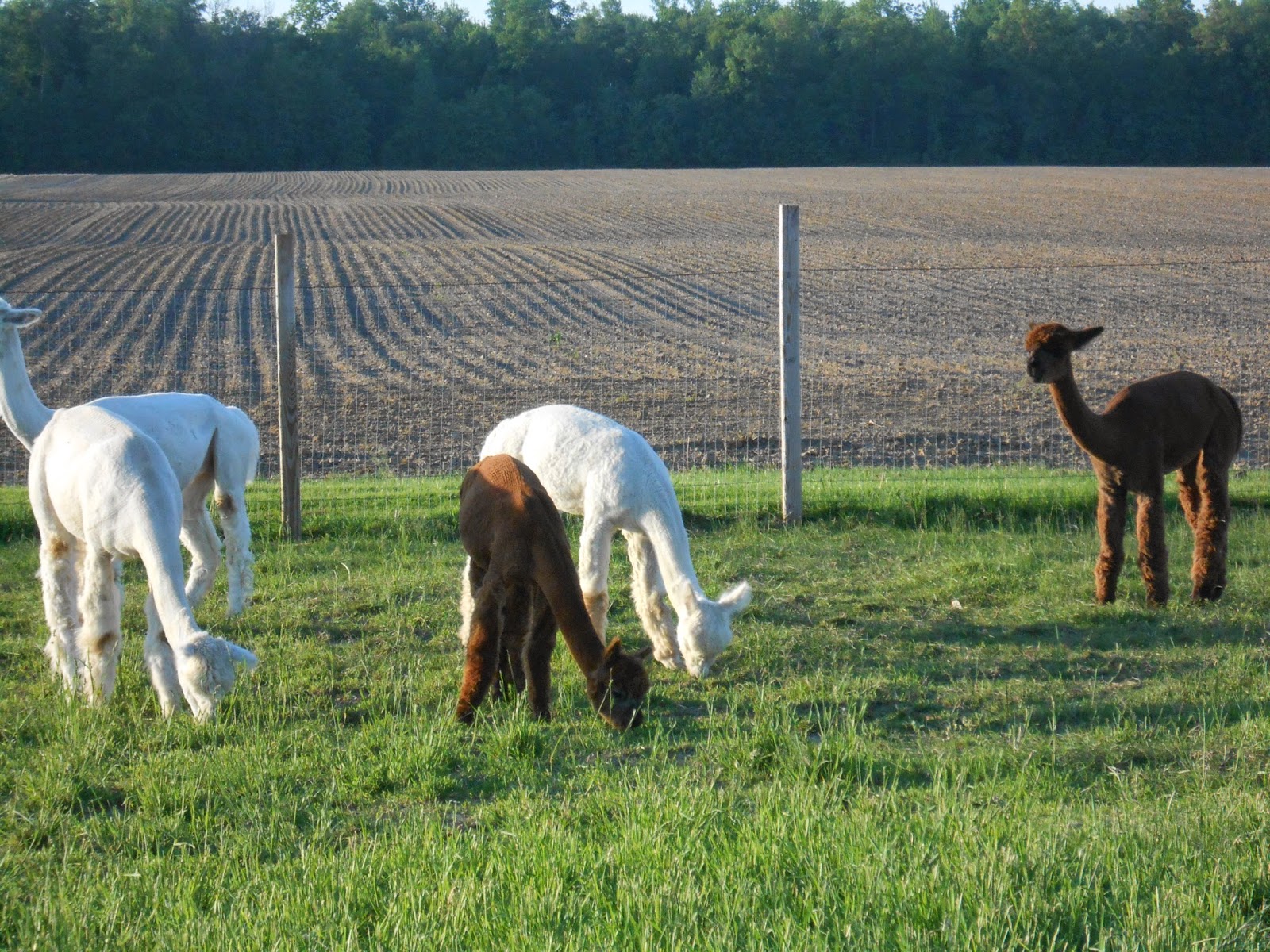 Rich has been working on a short fence line to divide this larger pasture into two sections. This will enable us to move them from one side to another in order to allow the grass to recover a bit. It prevents "overgrazing" which can ruin a pasture for the season. He enjoys being out in the sunny pasture about as much as the animals do, even though it means physical labor. Rich is a bit of a workaholic (understatement) and has difficulty just sitting in the sun, like I do,  in order to enjoy it. I used to feel a bit guilty watching him work so hard until I realized that he enjoys it. So now, I just sit back and photograph him working while the animals play. It's always interesting, however, to see just what a "fashion icon" my husband can be when he is working... 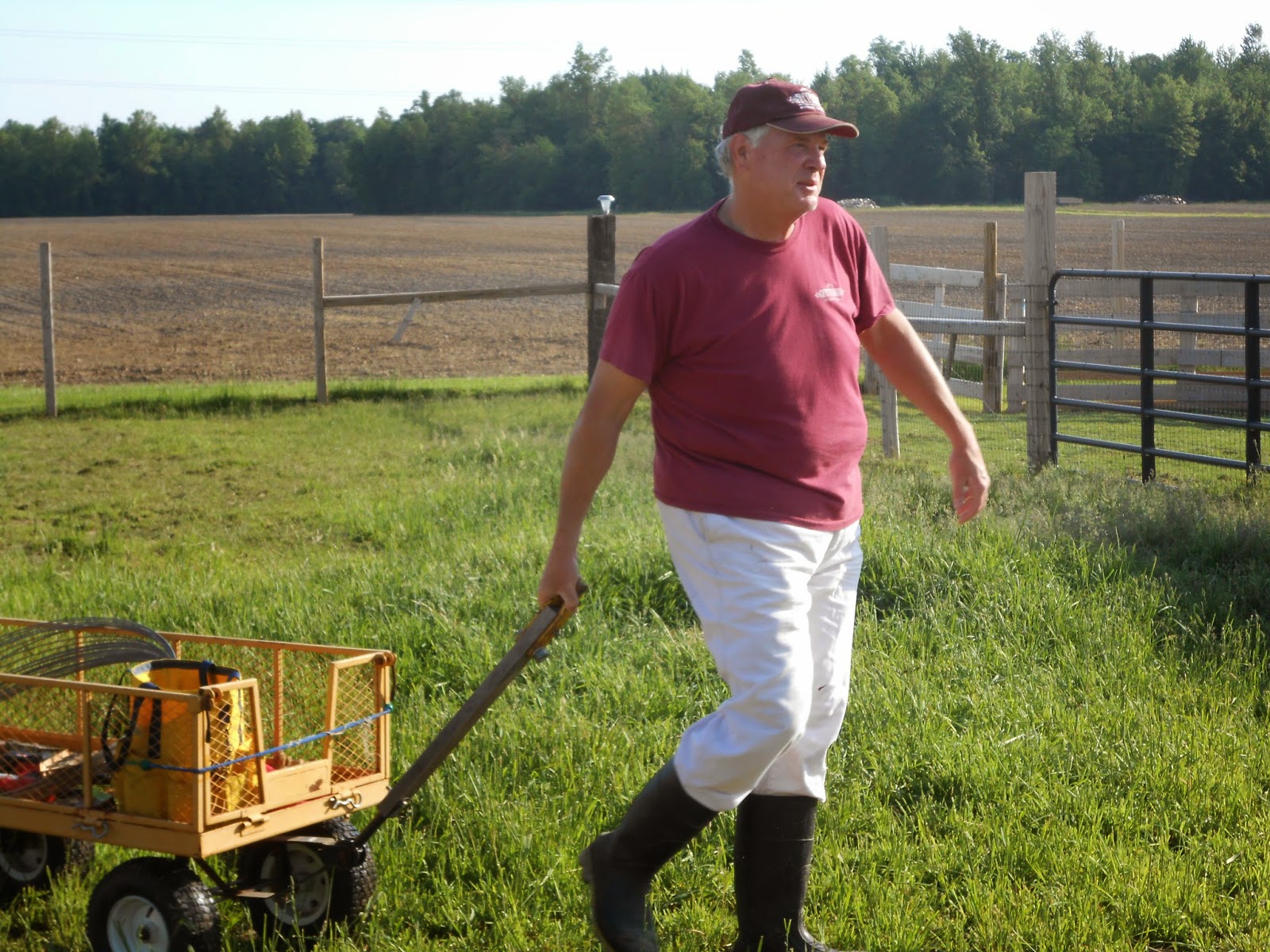 At least his hat and shirt match and none of the colors clash. Not exactly sexy, but manly.

Last evening we were able to sit on the deck and sip some wine for the first time this season. Not exactly the most exciting way to spend a Friday night but certainly very relaxing; this is one of my guilty pleasures in life. 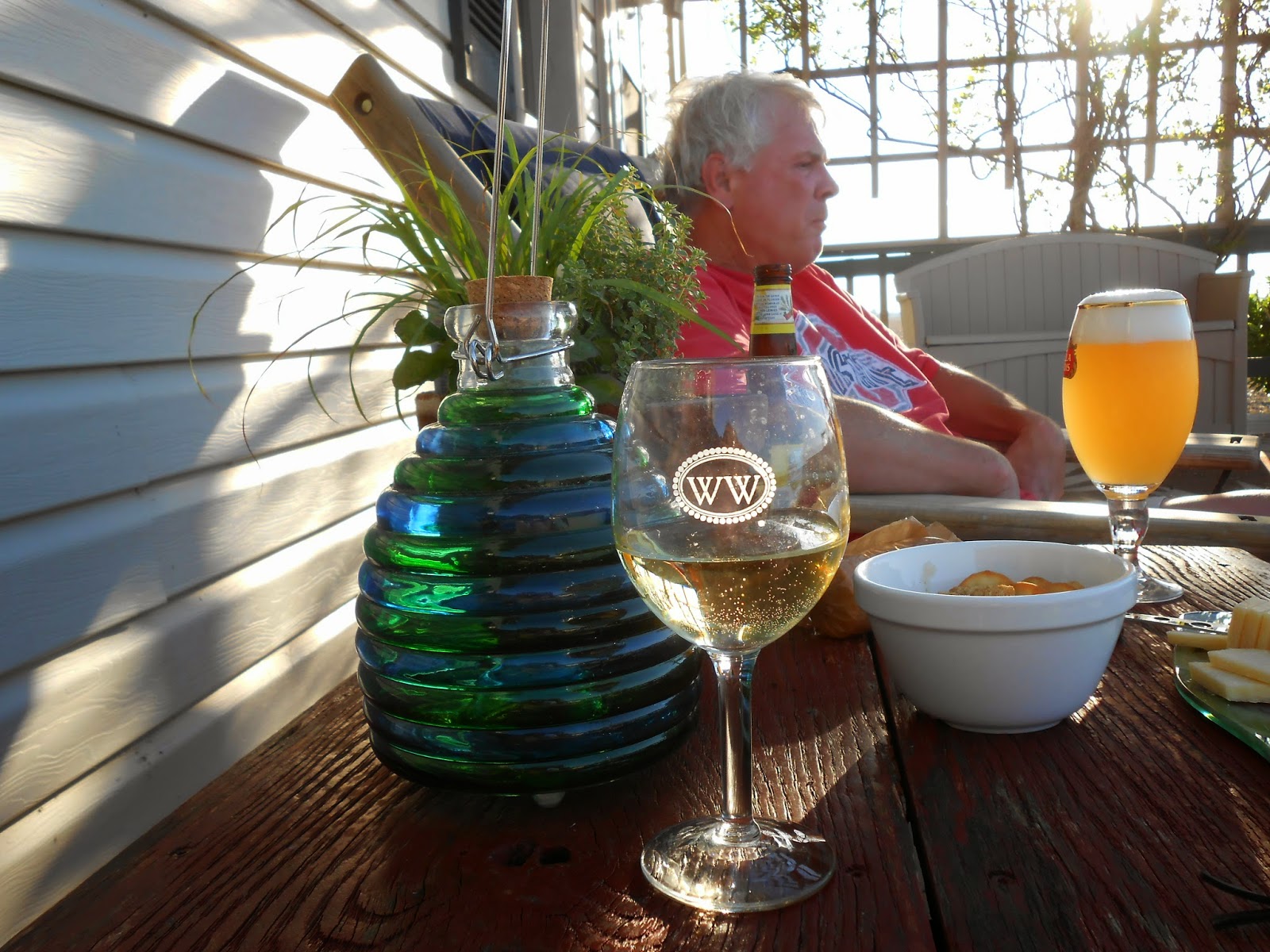 Rich, Callie, our dog, and I can frequently be found relaxing out there on summer evenings and his brother, Dan, often joins us when he has nothing else on his schedule. For some reason, watching alpacas play and graze in the field has a calming influence and just makes me smile. 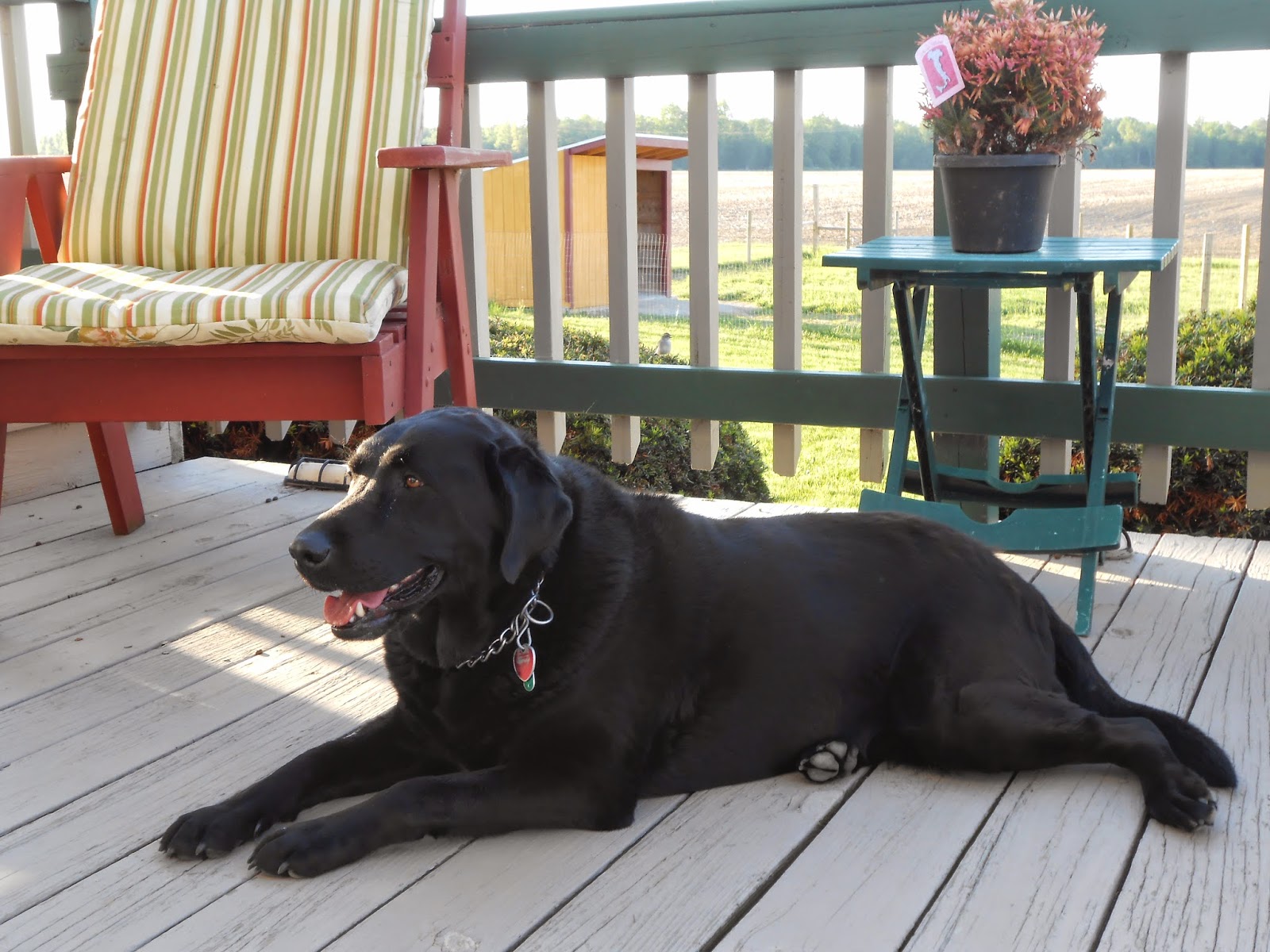 Last week, the yarn from last year's fleece harvest was finally returned from the mill. I sent this to a mill, that shall remain nameless, because it was recommended by an alpaca breeder we met at a show last year. Her yarns looked lovely so on that basis I chose this particular mill. It took over nine months to receive our product. This year I decided to take my fleece to Morning Star Fiber Mill and did so on May 5th. Dave, from Morning Star e-mailed me with an invoice last week and when I talked to him on the phone he promised to have my yarns by the second week in June! Both are small, family-run businesses of the kind that we like to support whenever possible. I am so pleased with the service and frequent communications from Morning Star and am looking forward to picking up my yarns. It is worth a day trip to their mill store just to see the lovely types and colors of yarns, rovings and dyes that they have for sale. I am planning on dragging my friends along with me again since it also offers an opportunity to have lunch with my bff's and talk about solving all of the problems in the world today! 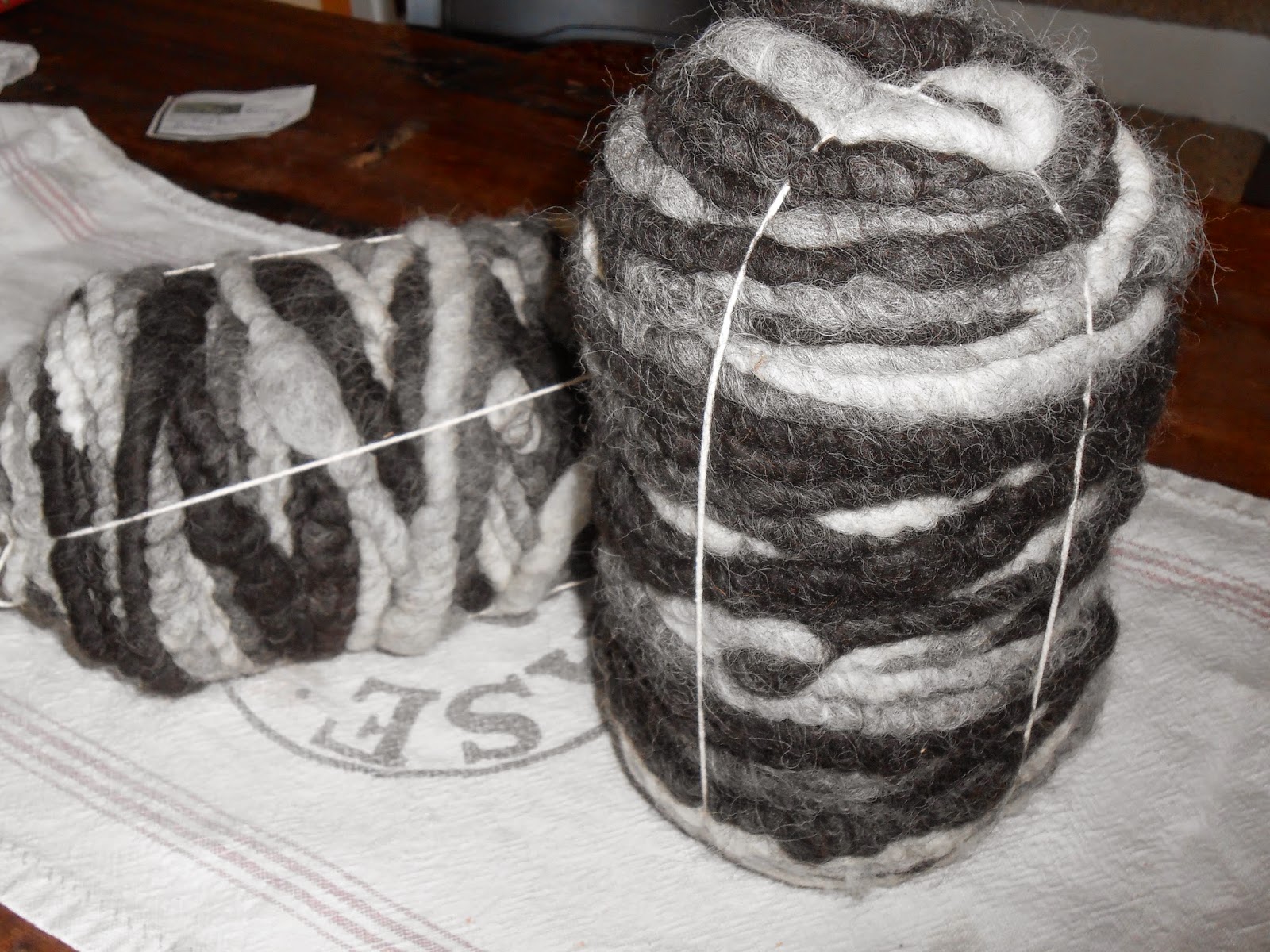 Lovely rug yarn made from Took and Firenze's second cuts. 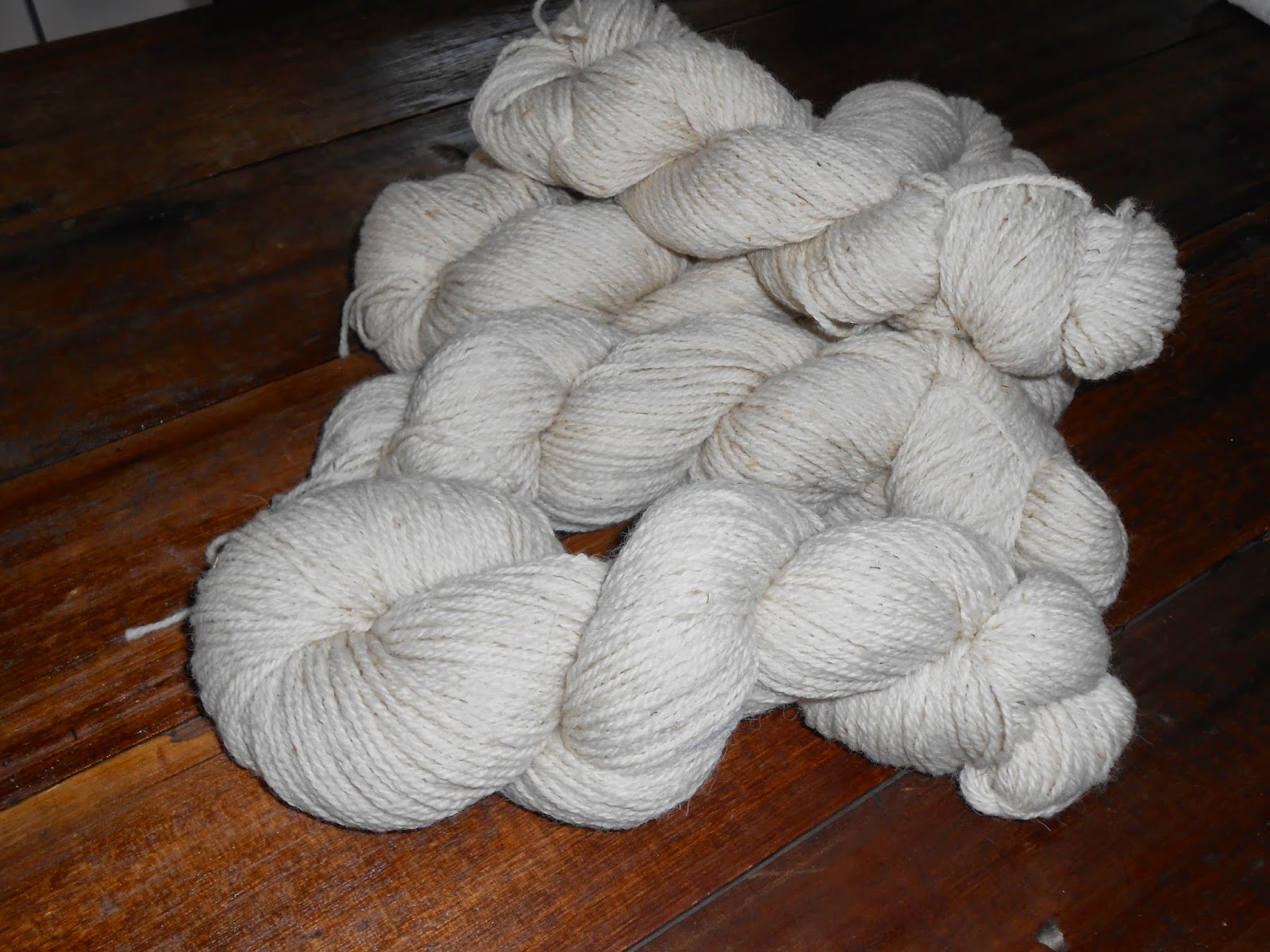 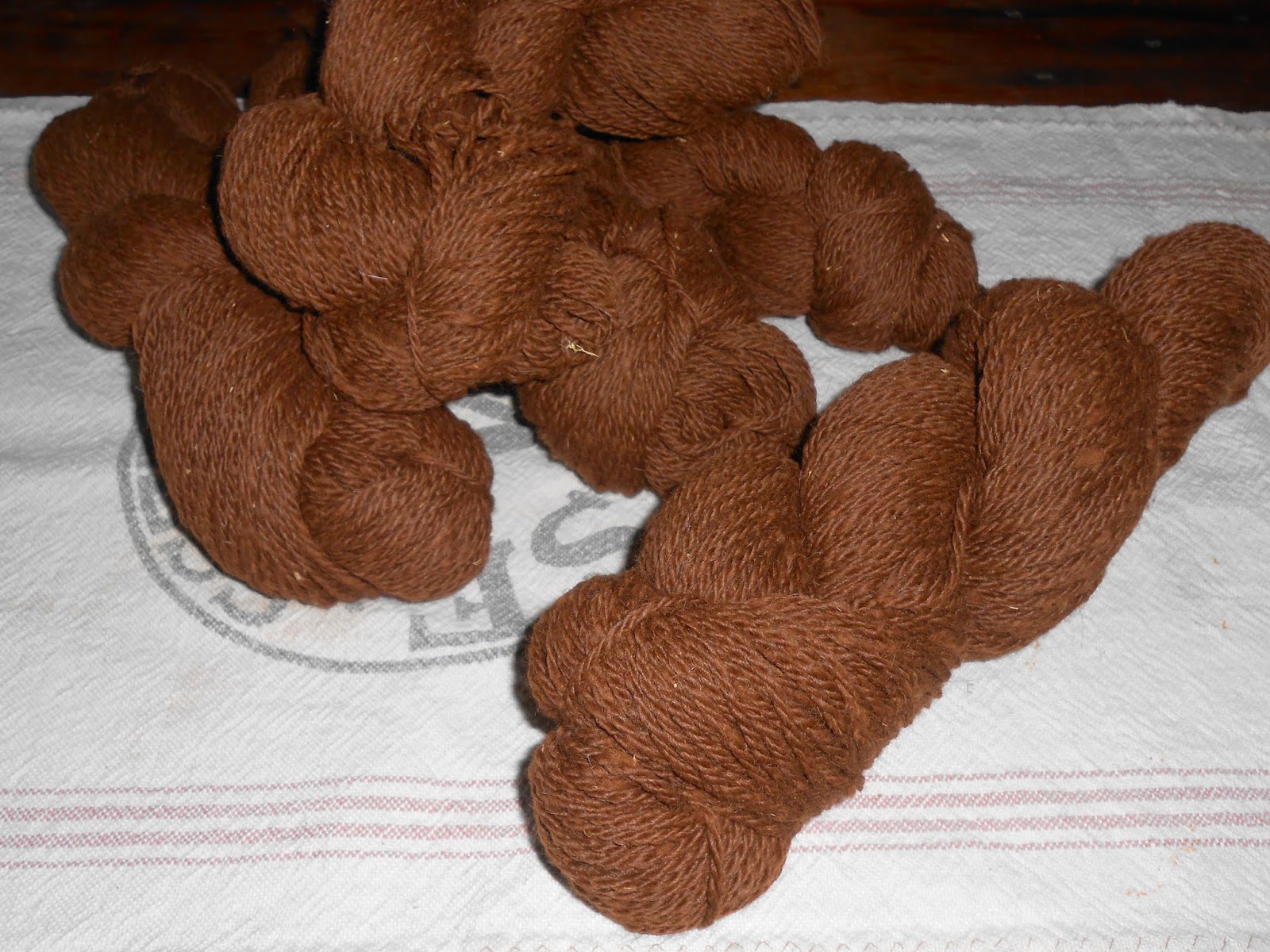 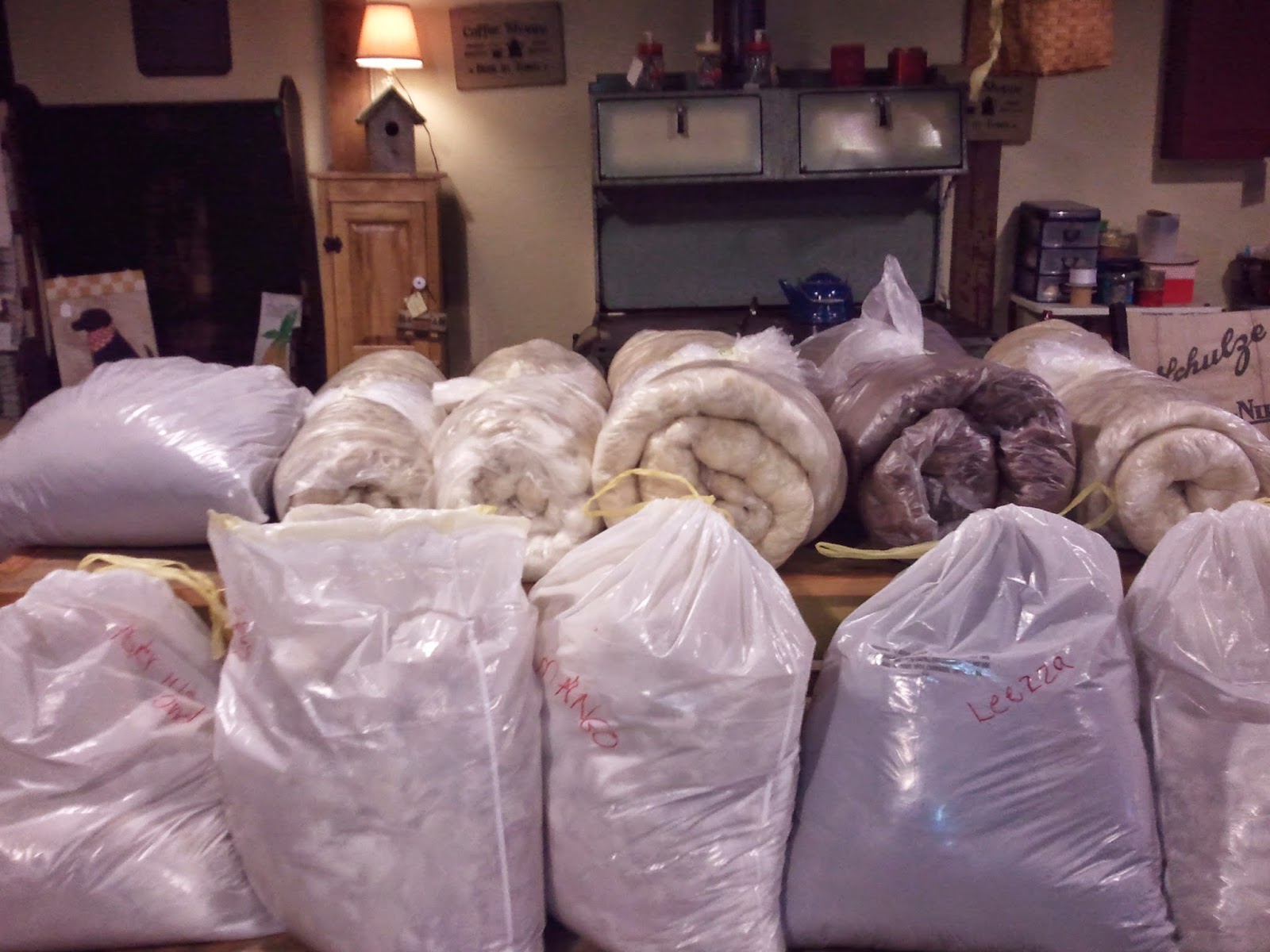 On May 5th two of my bff's, Liz and Nancy, went on an expedition to Morning Star Fiber Mill in Apple Creek, Ohio, to take this year's fleeces to be processed. I loaded the eleven assorted noodles  and bags of fleece taken from the herd on April  27th into the wayback of  my car and the three of us set off early in the morning to cross the state diagonally to the mill.

I use the process of "noodling" my blankets (the fleece across the back and shoulders of the animal) which is just catching it intact as the fleece is shorn from the animal, and placing it on a plastic drop cloth, folding each side lengthwise over the fiber and then rolling tightly from one end to the other as you would a sleeping bag. This makes it ever so much easier to sort out the short cuts and any vegetation that is in the fleece before cleaning, combing and carding it. I put the second cuts from the underbelly, neck and upper thighs into bags. This part is not usually long enough or fine enough to be processed into yarn but can be used to make rovings for spinning and felting or wrapped around a cotton core to make rug yarns.

Once we arrived at the small, family owned, mill south of Wooster, we were met by Devin, with whom I had spoken on the phone a few months ago. While we browsed through the mill store, oohing and aahing over the lovely yarns, rovings, dyes and other fiber supplies, Devin assessed the quality of the fleeces and weighed them up. It was gratifying to hear him praise the overall quality and cleanliness of my fleeces. He discussed with me the different types of yarns that could be made and his recommendations for each fleece. Once we had made the decisions as to what yarns and rovings I wanted, Devin took Nancy, Liz and I on a short tour of their facility. I was so enthralled that I forgot to take pictures! Duh! When I return to pick up the products sometime in the first week of June I will ask permission to snap some photos to include with the pictures of my yarns and rovings.

My friends and I drove a bit further down into Ohio Amish country and had lunch at a restaurant that serves traditional Amish foods before returning home. Being retired teachers, all three of us thoroughly enjoyed the educational experience.

Recently the weather turned unseasonably cold (whatever that means in Ohio!) and the animals have been staying inside only to venture out on the sunnier days. They do enjoy basking in the sunshine and I imagine it feels on their newly bared skin. 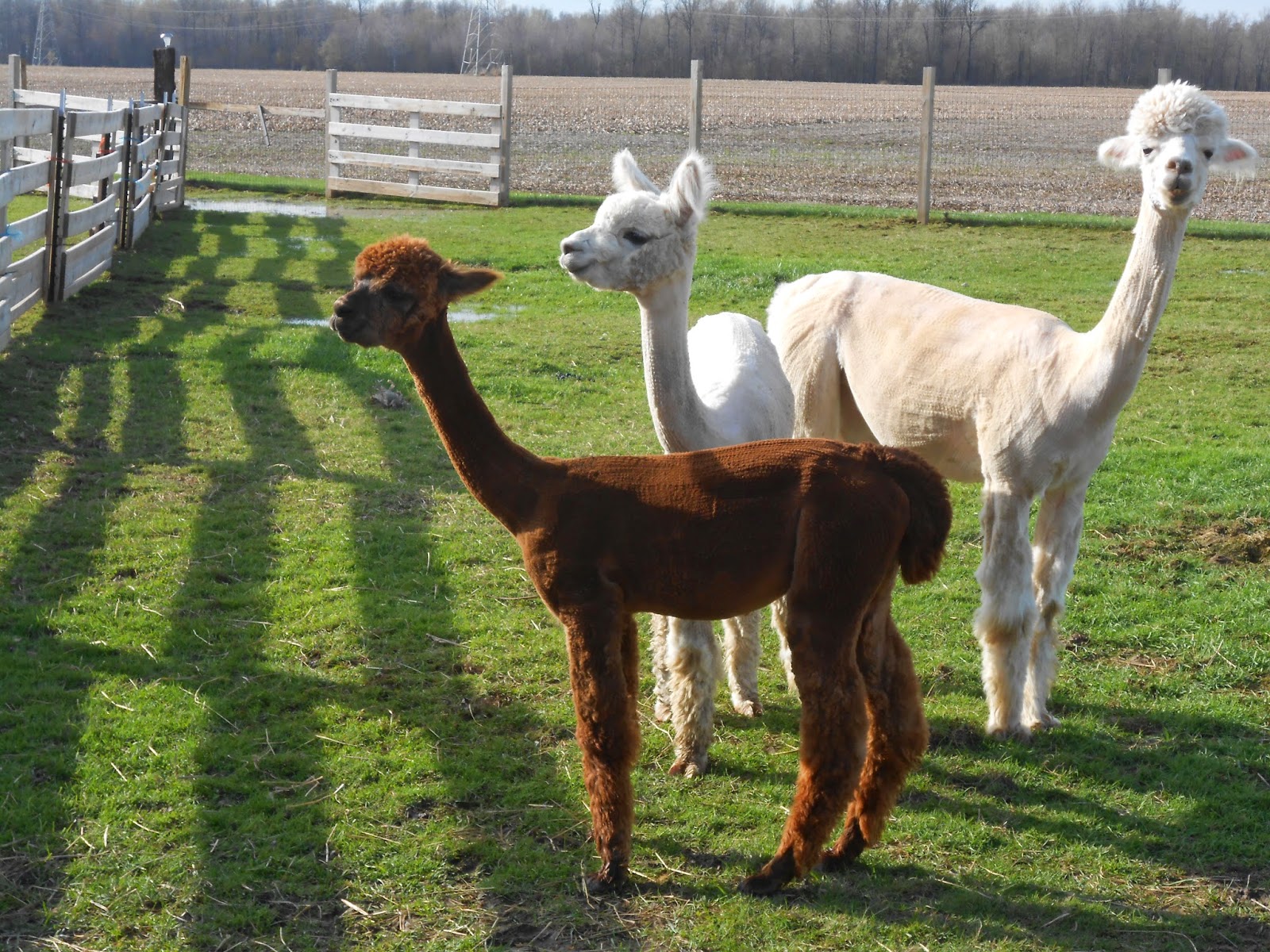 They look very strange after their stuffed-teddy-bear-like appearance of the winter it is difficult to tell them apart from one another unless I am looking them right in the face. Brutus, of course, is the smallest so he's no trouble; but Asterius is getting so much taller that standing alone he often can be mistaken for his mother, Took. Mango is by far the tallest of the animals. She is such a statuesque  young lady. Leezza is the one who looks so different from her fluffy cold weather self. If you compare the picture of Leezza in the banner of the blog to this one... 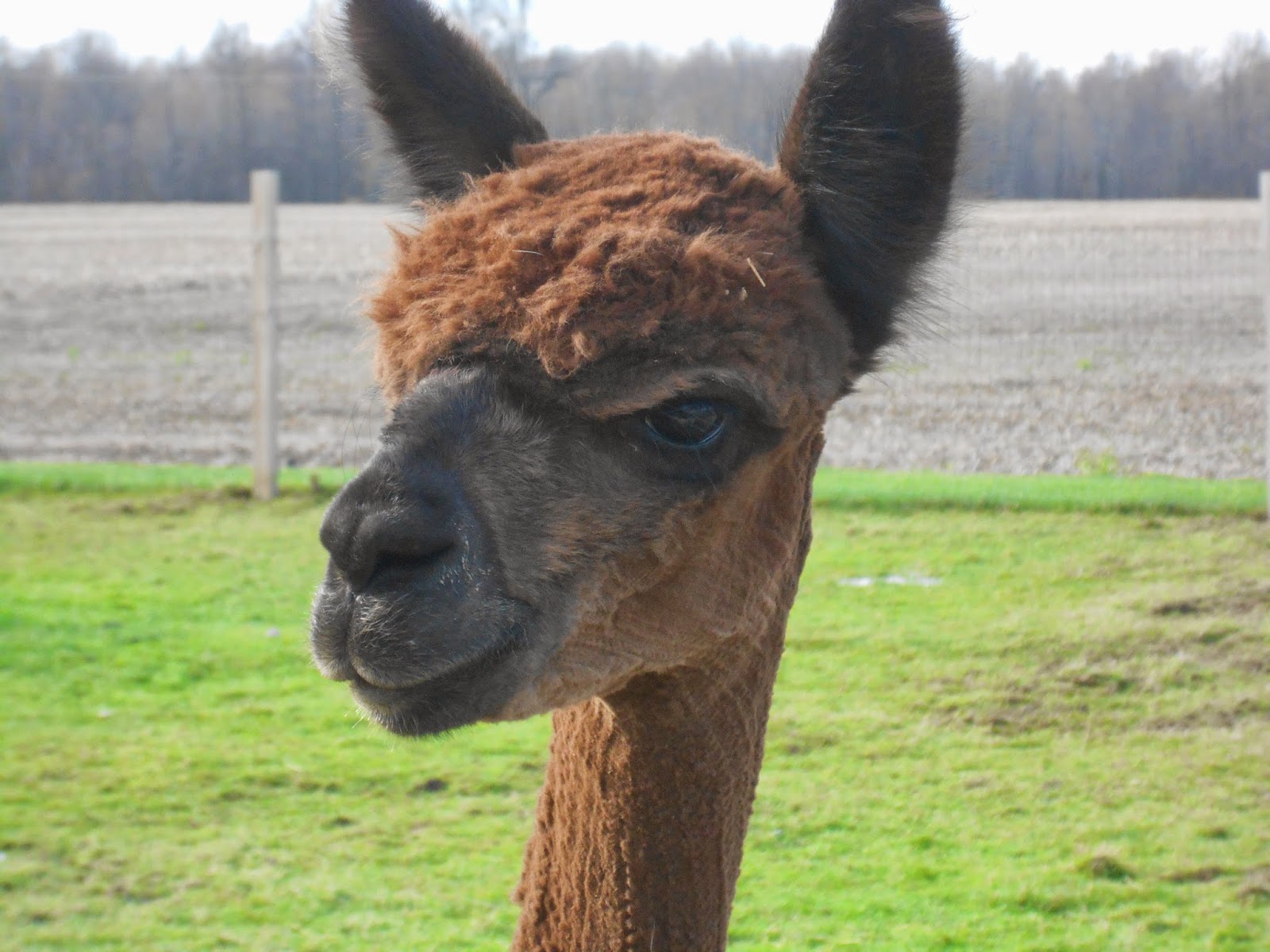 A totally different look. Her floofy topknot was so matted that it had to be lopped off. She was so young that we had last year's shearer leave her "helmet" head look and it got so long that it became matted. I guess we will have to shear it off every other year. She is still my gentle, shy little Leezza. A mere haircut doesn't change her sweet nature.

Now that the weather is milder than the harsh winter stuff we had, both Rich and I are spending more time out in the pasture and barn when we go out to tend the herd. I find the interaction with the animals to be conducive to feelings of serenity and overall cheerfulness. In short, they make me happy. 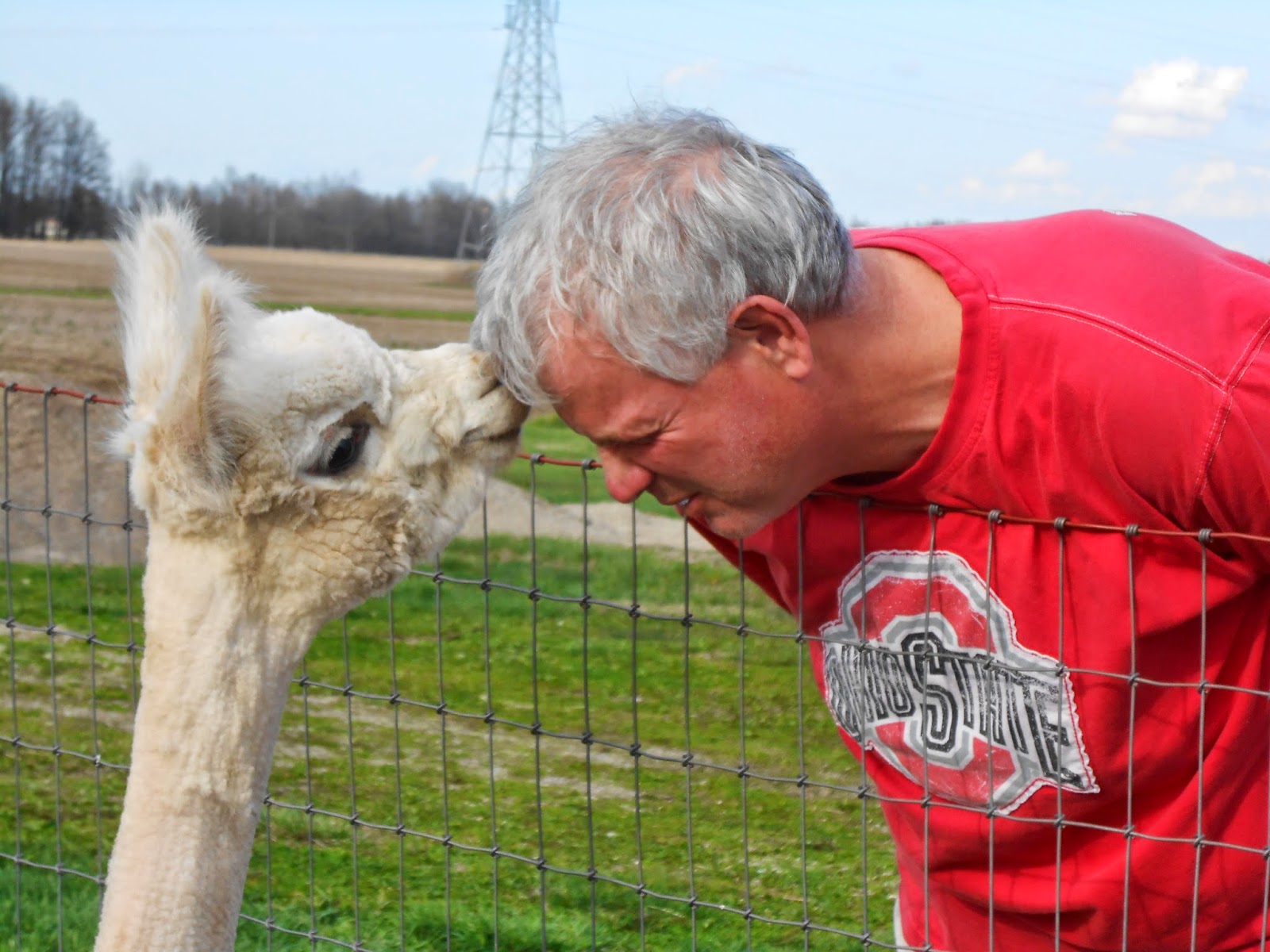 How could one not smile at something as cute as this? 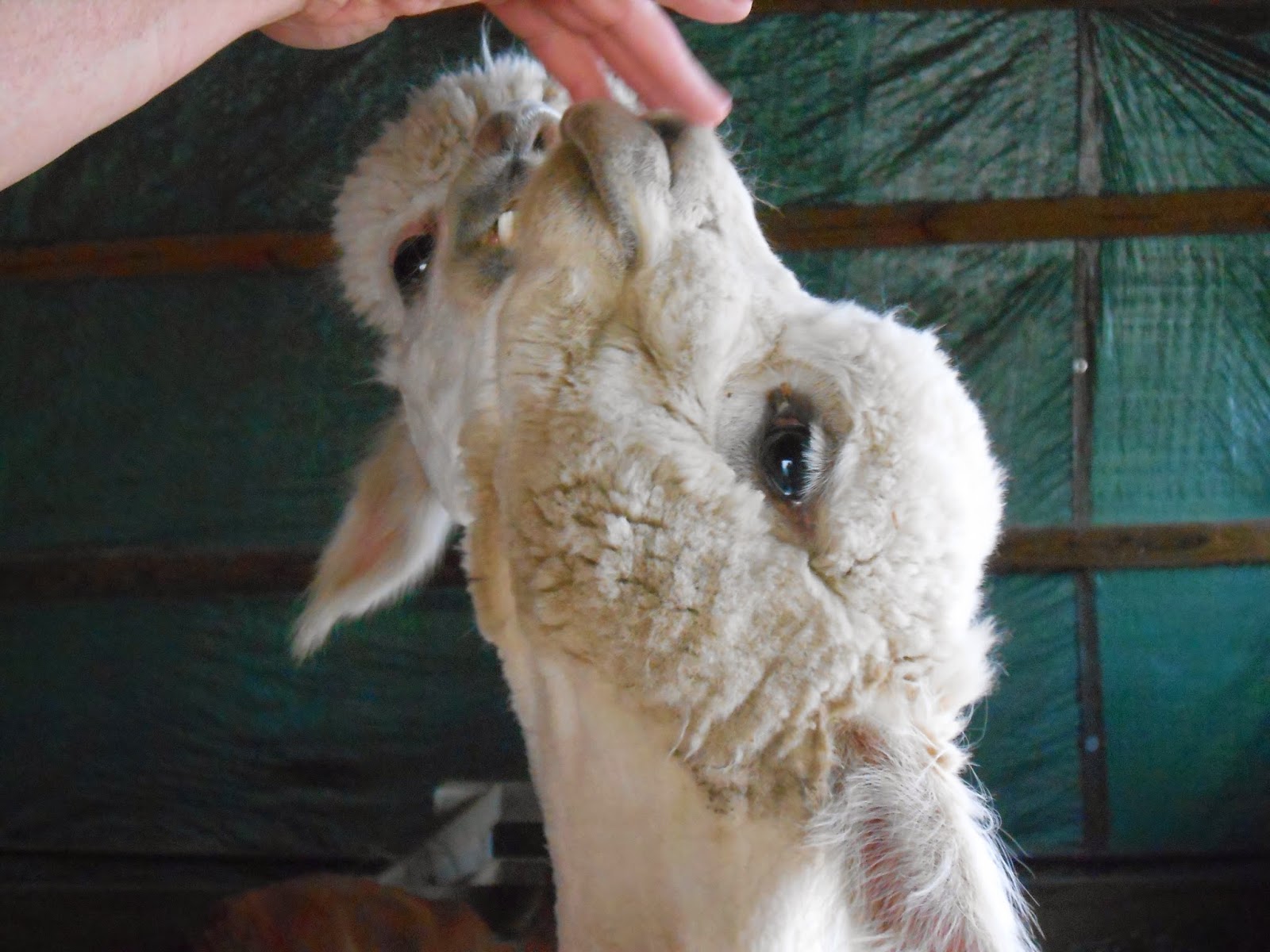 Mango (back) and Asterius (front) hoping for a treat from Rich

Posted by Buckeye Star Alpacas at 7:52 AM No comments: