Right Around the Corner! 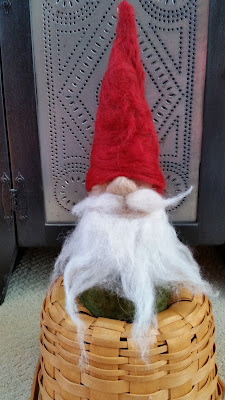 With Christmas fast approaching and Hanukkah already underway, I have been struggling to balance making new creations and meeting mailing deadlines. Just yesterday I spent several hours either traveling into town to our local post office or on the phone to a USPS branch in Orlando trying to track down an order that had been lost between here and there. I finally gave up and sent out another four skeins of our black baby alpaca fingering weight yarn. You know the one that I had blended with pearl infused rose fiber. It's a lovely yarn and the order was to be a Hanukkah gift. My customer was understandably miffed with the postal service (not with me, thank heavens) and I felt obligated to make it right and deal with the claims department of the USPS later. Sometimes running a small business here on the farm can be a bit stressful.

Speaking of stress, I only have about 2/3 of my shopping done. Since we are splitting our time between here and Florida this year I think that the last 1/3 of my shopping will be gift cards. There was no time to make any of my own gifts this year because much of my knitting was being sold in the shop. These fingerless mitts have been a popular gift. 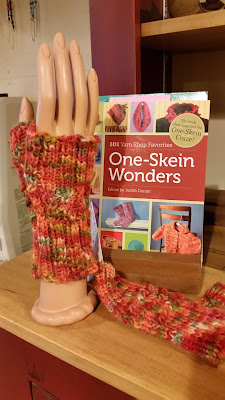 One day in early October, as I was idly surfing through Etsy, I discovered these cute little felted pumpkins. Thinking that they would make a great tablescape for my girls luncheon I decided to teach myself how to needle felt. One thing led to another and I found and became enamored of felted Swedish Tomten or Christmas gnomes. I have made them in sizes ranging from 3" to 10." I have table decoration size and  tree ornaments and all of them seem to sell out quickly. I'll be creating some more smaller ones this afternoon after I finish the chunky eternity scarf that I started yesterday. Me thinks that I have too many irons in the fire at one time and maybe that is contributing to my stress levels;-) 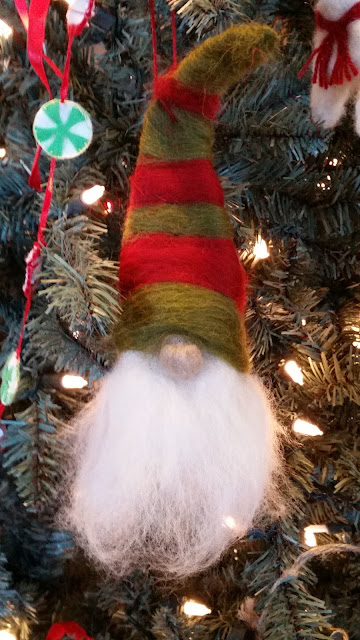 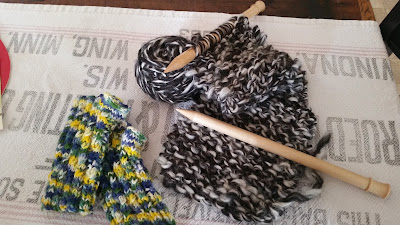 There's one other item on my plate right now, too. A really big one. One cold, cold day last January when Rich went out in the pre-dawn to feed the alpacas, he noticed that one of the girls was missing. Puzzled, he went out closer to the fence dividing the boy pastures from the girls where he saw a splotch of white in the field where our very black Mocha resided. Somehow, old Took, technically Mocha's grandmother, had gotten into his pasture overnight. She was ready to return to the girl side of the fence and he was contentedly grazing with a very smug look on his face. We had her tested a few months later and the pregnancy test was positive. So now 11 1/2 months later we are on the lookout for the arrival of a new cria. 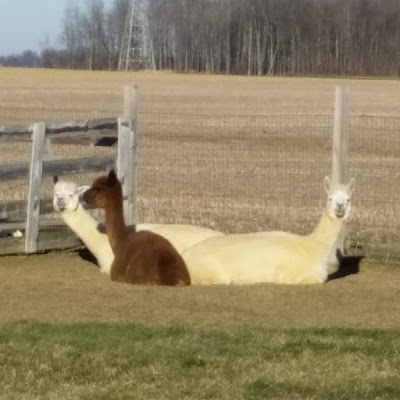 For the past week, Tookie has been showing all of the signs of imminent delivery. She spends an awful lot of her time laying around the barn and the pasture. Our biggest worry is that she will deliver when there is no one around to dry off the baby. In this cold weather it could cause the little one to suffer from hypothermia and die. Rich has hung partitions in the barn to eliminate drafts and we have heat lamps in position to switch on when it arrives. He also dug out cria coats in three different sizes.

I am checking the pasture every hour or so and each time I need to leave to go to the store or for an appointment I worry until I am home again. But with alpacas being pregnant for so long it is not unusual for them to deliver two weeks early or two weeks late. Took has a history of being on time and delivering a bit late in the day. They almost always deliver during daylight hours. This is an adaptation to the fact that they are indigenous to the high mountain planes of Peru. If they delivered after dark the cria would almost certainly die because they don't lick their babies dry. The baby is up and walking around and nursing within minutes of birth.

So out here on the farm more than just Christmas is right around the corner and we are more than excited about all of it!

Posted by Buckeye Star Alpacas at 6:51 AM No comments:

Way Back in October

I wrote this one after our annual family reunion and just haven't published it until now. Here it is:


By nine o'clock the truck pulled out, fully loaded, Dee in the back seat, Rich at the wheel and me as the navigator (Who am I kidding? After I had my coffee I slept most of the way home). The ride home was uneventful. We unloaded and I've been doing laundry all afternoon. Rich went out to pick up a pizza for Sunday dinner to close out the weekend, and that's the end of another successful family reunion at Lake Hope State Park. Until next year, au revoir!

Sorry for the long dry spell. Writer's block. I'll try to do better.

Posted by Buckeye Star Alpacas at 2:05 AM No comments: