It's very blustery outside and the temperature has sunk overnight from a steady three days in the mid 50s to a present 32 degrees and headed down into the twenties tonight. The past two days have been rainy and rather miserable for late December in Ohio when we usually have snow. I've worn my raincoat with the lining buttoned in more this month than I did in Ireland where all the travel literature told me that I should be prepared for rain in September! I wore that raincoat once to dash from our B&B in Doolin across the street to the pub for supper. The rest of the time it was just taking up baggage space that could have been used to bring home more lovely Irish woolens.
On our second leg of the trip we drove around the Dingle peninsula towards Dingle Town where we would be staying three nights. Rich had been really looking forward to this because we would be staying at Murphy's Pub B&B where our room would be over the actual pub. We all know what was on his mind here, I'm sure.  Three nights of imbibing in Irish beer and cider, sampling the fish and chips and then being able to stumble up the stairs to our room. No worrying about driving after the party.

Murphy's is right on the strand across from the harbour at Dingle and in the midst of all the tourist shops and Dingle Bay cruise ports. As with all of the pubs we encountered along the way there is music every night of the week.  Dingle Town itself is very much geared to tourists and the streets are crowded every day. Parking at Murphy's is in the back and a bit tricky with the twists and turns to maneuver into (see Installment I about not getting a larger car). And you have to climb a flight of steps with your luggage.

The really big attraction for Dingle is Fungi, the local Dolphin, who has been living in Dingle Bay since 1983 and puts on such a show that several short cruise lines have sprung up centered solely on viewing him. He is so reliable in his appearances that they offer a money-back "guarantee" if you don't spot Fungi while you're out in the bay on the boat.


We couldn't go to Dingle without taking one of the hour long cruises and I will admit, it was impressive. On the way out to the rocky, cavernous area where Fungi lives we passed some colorful kayakers and several other cruise boats creating a festive atmosphere. 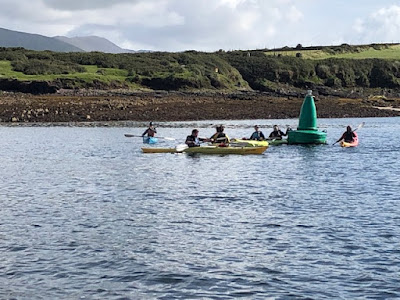 Fungi did not disappoint. Our boat idled just offshore along with the kayakers and other cruise boats and after just a short while the dolphin surfaced and began swimming around amongst the various watercraft. He never jumped full out of the water that day but put on a show for us by keeping us guessing where he would surface next, spurting water and air from his blow hole. I took very few photos and videos, caught up as was everyone else, with trying to guess where he would appear next.


In Dingle we also met a man with a donkey and a dog, quite a colorful trio, who set up each morning the main square. On the second day in Dingle, Rich went out for his early morning walk while leaving me to prepare for the day ahead. He arrived back in the room, excited to show me what he had discovered in the square. I must admit it was a delightful surprise to find a small gypsy wagon and a gentle donkey just outside the pub. 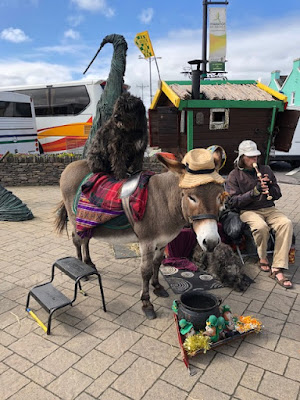 Although there are quite a few pubs in Dingle Town, I think our best experience was at Paudie's Bar in the Dingle Bay Hotel. The "Blowin' Ins," a trad(itional) duo were playing that night and are apparently popular in the area. Along with a pub full of tourists and locals, we enjoyed their music and maybe a half-pint or two of Guinness. I discovered that their superb Irish coffee paired well with the sticky toffee pudding as an after dinner treat.

During our wandering around the hilly streets of Dingle we also discovered Foxy John's Pub, a hardware store/pub combination, and Dick Mack's Pub where we had a beer in the "snug," a cozy little area that was partitioned off from the crowd. Many of the older pubs had snugs where tradition has it that the local women sat to chat, business was conducted in private or couples had some privacy while courting. 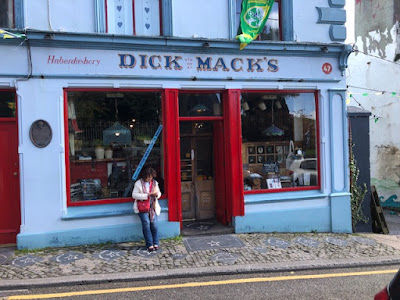 We had originally planned to stay at Murphy's for three nights but being someone who needs her sleep in order to fully enjoy the next day's activities (see paragraph 3 above, i.e. music all night) we decided to move on a bit along the Ring of Kerry  and stay the third night in a different B&B in Ventry. The drive from Dingle to Ventry took us along the Ring of Kerry where we had a couple of unplanned stops along the way. We arrived early in Ventry and decided to travel up to Slea Head which we had been told was even more scenic than the Ring of Kerry. Slea Head did not disappoint. Running along the bay with a steep drop off on the left (my side, remember) I was breathless for most of the route and not just in awe of the view!

Traveling on our own as opposed to an organized tour allowed us to make impromptu stops along the way. One of them was the site of the ruins of a famine house, built in the mid 1800s. The house and its history brought home to us the tragedy of the potato famine and the horrible conditions that sparked the great Irish migration to other parts of the world. We were also able to stop at the ruins of a ring fort and beehive homes believed to have been built in the 11th century at about the time of the Norman Invasion. (don't quote me on this one as I found different sources all saying something different.)


I will say that the hike up the hill is not for the faint of heart. At first I wasn't sure that I was going to tackle it as I stared up the steep, rocky and winding path. I let Rich go ahead of me while I pondered my dilemma. In the end, given that there was a handrail on the path, I haltingly made my way up each hill and wasn't sorry that I did. Each location was fascinating in it's own right. The people who lived and worked up those hills earned my respect as they were much heartier than I.

At the end of each day I had been consulting my Fitbit, proud that I had been racking up at least 10,000-11,000 steps each day. At the end of this day I was dismayed to find only 5,000+ steps. I was positive that it had been more. Upon checking the number of staircases that I had climbed (a stairway is both up and down to be counted as one) I found that my Fitbit had been calculating those hills as stairways! 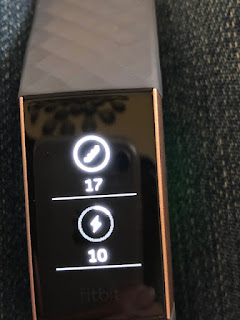 The Plough in Ventry is located high atop a rocky hill on the Dingle Peninsula overlooking Dingle Bay. The lawn area was charming and the view spectacular! In the house itself the decor was in a word, crowded, and the hostess was less than welcoming. I'll leave my review for TripAdvisor.

The next day we would be headed to Kenmare and a stay at The Shelburn Lodge.


Posted by Buckeye Star Alpacas at 3:37 AM No comments: