The Rocklands House in Kinsale was aptly named. Perched high atop Compass Hill above the village of Kinsale, we were gifted with such beautiful views of the town and the port on the River Bandon. Kinsale, much like Dingle, was a very tourist oriented town. It was full of gift shops, both budget and upscale types, and restaurants of every variety. The first evening after John drove us around the main part of town and dropped us off, we strolled a bit and then settled on a pub called The White House.

The White House proved to be your average pub with congenial company. We were seated at a booth across from another American couple with whom we shared experiences of our travels in this lovely country. After a Guinness or two it seems that everyone in the pub is an old friend. This held true for all the stops we made on our trip with both tourists and locals. The White House was decorated with art work and oddities, one of which impressed Rich so much that he came home and recreated it with odds and ends that he had around the farm. He originally placed it in a prominent place just inside the front door of our store where it sat all winter. When he finished his winter project, carving out space in his wood shop and building an office for himself, I insisted that he move "the Thing" into his new man cave!
After a very restful night in one of our host's comfortable rooms we ambled down to breakfast a few minutes early when the smell of fresh coffee wafted up the stairs. John told us to pick a table and he would pour us a coffee. Then while we waited we took our coffee to the dining room windows to enjoy the breathtaking view once again. Our second cup of aromatic coffee was served with breakfast where I couldn't get enough of John's delicious, warm, homemade scones. When I asked for the recipe he told me that I could find it on Mary Berry's website (The Great British Baking Show judge). I have tried it but mine were just ok.  They must need the atmosphere of Ireland and someone else to bake them for me in order to come out so tasty.

After breakfast that first morning in Kinsale, we drove out to Charles Fort  which also overlooks the River Bandon. Charles Fort is a 17th century bastion star fort. It was constructed in 1682 by the British and was in continual use until 1922. It housed British troops in the Williamite War, WWI, and through the Irish Civil War. Rich and I wandered up and down through the massive stone walls of the fort and through the Officers' quarters, Governor's house, soldiers' quarters and the stables. It was a beautiful and peaceful site in spite of it's original use. We stopped here for our late morning snack, deciding to forego lunch and have an early dinner instead.

Posted by Buckeye Star Alpacas at 7:45 AM No comments:

Ireland - Installment VI (Writing in the time of Covid 19)

Shortly after my last post on March 11, Governor DeWine issued the stay at home order. So from March 23 onward (and a little before that for me) I have been doing just that. Staying at home. With so much time on my hands you would think that I would have finished my account of our Irish trip by now but that's not the case. The first thing I did after the order was to go through all of the drawers and closets on the second floor and do a massive clean out. Gone are all of the unworn clothing that I had intended for months (years) to donate. Gone are over 20  years worth of craft and sewing supplies that I knew I would never revisit. I have culled all of those items from the second floor that I had intended to get rid of for years.

I had figured that this would be the opportunity I had been waiting for and making excuses for not doing. My intention was to finish knitting the pair of socks that I had begun in Ireland and to complete writing the tale of our Irish trip. You know what they say about the road to hell being paved with good intentions. I just burned brightly for the first couple of weeks and then suddenly fizzled out in a shower of ennui. I lost the energy to do much of anything productive and buried myself in the comfort of reading books all day and the escapism of  baking and watching Netflix, Prime and Acorn TV.

When I shook myself awake from this daze I realized that what they say about moving your physical body is also true about writing. If you don't use it you lose it. So here I am, wide awake now and back into the routine of exercise, riding the stationary bike and doing yoga since the weather is so awful still, and now back on track with my writing.

On Monday, September 16th we left the luxury of the Shelburn Lodge in Kenmare and headed around  the Ring of Kerry and then on to Kinsale for our next evening.On the way we drove through narrow winding roads that ran  through the Killarney National Park. The sylvan landscape held surprises for us at every turning. Typical of the ruins was an abandoned church that we glimpsed through the windshield. I couldn't help wondering what kind of stories this old church could tell if it could talk.


A  little farther on in the drive through the Killarney forest we were met with another surprise. Their expressions made me feel like I was the intruder in their home. Can you see the wild goats in the second picture? The big guy was in the center of the road staring disdainfully  at us and took his time crossing over. 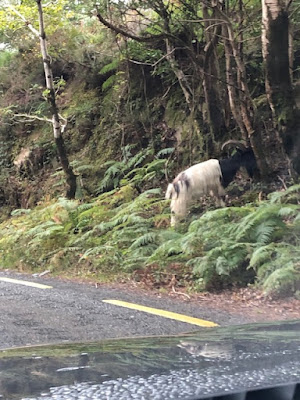 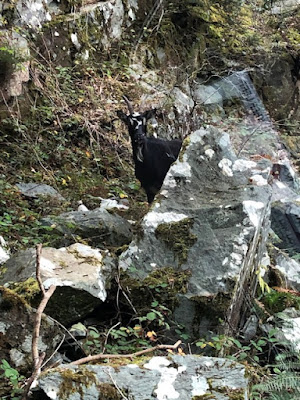 On the way we made an unplanned stop at a place called Muckross House in Killarney. The beauty of an independent driving trip is that we could take time for spontaneous stops along the way. This one did not disappoint. We had been noticing signs for a place called Muckross House. Curious, I did a quick Google search and found out that this was a Victorian mansion and estate that was open to the public. On the spur of the moment we made the decision to stop at the site. May I say here that we were not disappointed. This was probably one of the most interesting and beautiful sites that we visited in a country that is full of beautiful sites of all variety.

Muckross House was built by Henry Arthur Herbert and his wife, Mary Balfour Herbert. Construction was begun in 1839 and completed in 1843. Apparently the original plans called for a larger, grander structure, although I don't know how it could be grander without becoming a palace. In the 1850s they began an extensive and elaborate garden renovation in preparation for Queen Victoria's visit in 1861. In September the gardens were filled with blooming things and were certainly as beautiful as any other time of year.

Also on the Muckross estate grounds was a reconstruction of farm houses and outbuildings typical of the era. Instead of waiting for the tram we trudged uphill to the display of large, medium and small farm houses that showed how the commoners would have lived at that time.

The farm displays were liberally populated with the animals that would have been on pretty much every small farm of the era. My favorite were the donkeys.
As we meandered in, out and around the farm houses and buildings you could hear the donkeys loudly braying at the intruding tourists. They were actually very friendly when approached and seemed to enjoy a nose rub.
We lunched in the very modern and well stocked cafeteria at Muckross, shopped in the Muckross Weavers gift shop and then headed out for Kinsale where we would be spending the next two nights at the Rocklands House B&B. Let me pause here to recommend that if you ever decide to travel Ireland by car it's wise to plan on at least two or three nights in any one place. Because the country is so much smaller the distances between sites is usually under a couple of hours drive. We used each b&b as a sort of hub for traveling out in different directions each day. This meant that we were not constantly unloading and reloading luggage into the "boot" of the car.

We arrived in Kinsale just before suppertime and wound our way up a steep and narrow road to the Rocklands House where our host, John, met us and showed us to our room. As we were pretty much tired out from the drive and a bit hesitant to drive back down to town, John offered to drive us down and point out the restaurants that he would recommend for our supper. He also showed us where the local taxi service was located so we could pick up a cab for the drive back up the hill. Later, we found out that John was pretty much a one-man-band when it came to operating the B&B. But more on that in the next post.

Posted by Buckeye Star Alpacas at 6:40 AM No comments: