Signs of the Season Ahead

Is it because you live in the country that you become so attuned to the subtle changes in the weather? I've never been a "real" farmer like so many friends around us, but after eighteen years living deep in northern Ohio farmland, I've begun to notice the subtle changes in the air long before each new season is officially upon us. For example, one day in late February the temperature reached a high of 35 degrees from 21 in early morning. Still a bit chilly for one to call it Spring. But the daylight, expanding in length at that time, was different, somehow.

Soon after that, around the first week of March, I saw my first buzzard, a sure sign of spring, and the birds actually began to sing loudly in the morning as the still chilly sunlight appeared over the fields and woods. Over a week ago I spotted my favorite red winged black bird on our way over to Tiffin. For me, that means spring is here. Last week Rich found the beginnings of a nest in the wisteria vine over the deck. He gets rid of those quickly because to let it be completed means a constant battle with bird poo on the deck all summer long.

Large farm machinery has occasionally been cruising down the road past our country cottage, some on their way to be serviced and a few shiny new ones headed to their new homes. This is a busy time for Deere, Case and other machinery dealers as farmers need to get their equipment ready for planting. Down the road the farmer was shelling a field of last year's corn harvest while the ground was still frozen and dry. 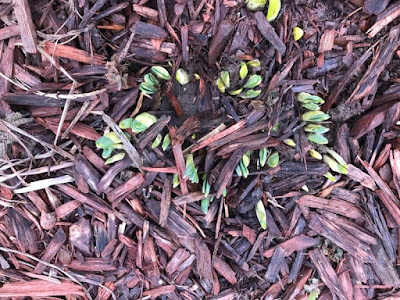 Two weeks ago we spent some time with our friends, Dan and Karen, in Washington D.C. where they have a winter home near their grandkids. The daffodils were blooming in Arlington National Cemetery and hardy pansies were already planted around many of the public buildings. Although we were a week or two two soon for  the cherry blossoms it was lovely to see other blooming things. Out in front near the picket fence our daffodils are still only sprouted a couple of inches. They seem a bit late this year. I've been stuck inside with a nasty case of bronchitis for the past  couple of weeks so Rich brought home some lovely pink tulips to cheer me up. I'm much better now thanks to modern medicine. 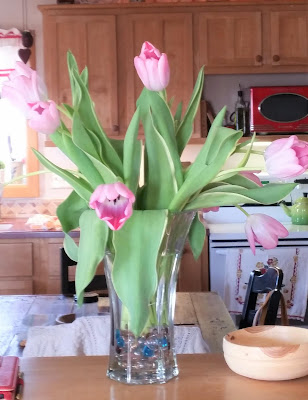 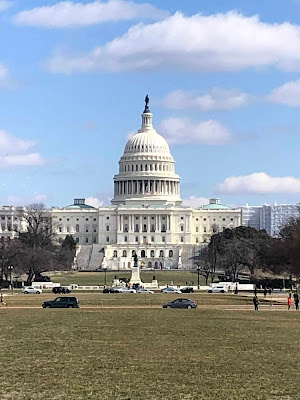 I have no  new pictures of the "kids" since I've been stuck inside so I'll leave you with this January picture of Asteri. She's one of our 2018 crias and of the two is the most curious and people friendly, always approaching the gate or window with her curious little hum. Come on out to the farm and see for yourself how much is going on this spring. 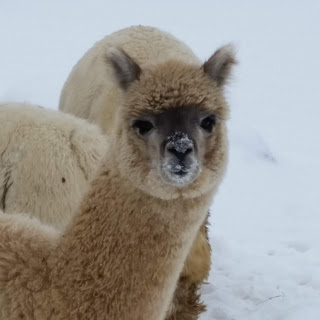 Posted by Buckeye Star Alpacas at 8:02 AM No comments: