Saturday evening, September 14, in Kenmare was the evening of the big All Ireland Senior Football Championship 2019 - Kerry vs Dublin that we had been hearing so much about all along our trip so far. Due to all of the flags, bunting and banners in Kerry's colors, green and orange, that we had been seeing everywhere as we drove the highways and byways, we knew that we were in Kerry territory. Rich and I were also careful to pick a pub for dinner where we were pretty sure the game would be on all of the TVs. PF McCarthy's  was our choice based solely upon it's appearance and it was a great one. 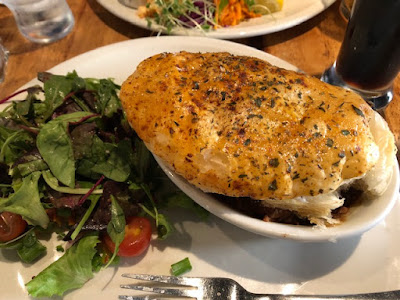 The Guinness stew was to die for and the Fish and Chips that Rich picked was one of the best of our trip. But the best part of the evening was the conversation we had with the two young German women at the table next to us. Neither they nor we knew the first thing about the game going on which made the talk at our tables even funnier. One of the young ladies was furiously trying to Google the rules each time a referee held up a different colored penalty card. In the end all four of us chose to just cheer along with the crowd when Kerry did something positive, or groan when they committed a mistake. I did notice though, that the actual Irish fans in the pub were much better mannered when Kerry received a bad call than the Ohio State fans here at home when our team was in a similar situation! Hmmm? Ultimately Kerry lost and everyone in the pub when on drinking congenially.

Sunday morning, after a lovely breakfast in the dining room of Shelburn Lodge where I had the delicious porridge with whisky sauce, we decided to  stroll around town a bit to check out the shops.  I didn't really expect for any of them to be open on Sunday but since Kenmare is such a tourist town there were a few open. Of course I found a woolen shop with yarn in it and couldn't resist another purchase. 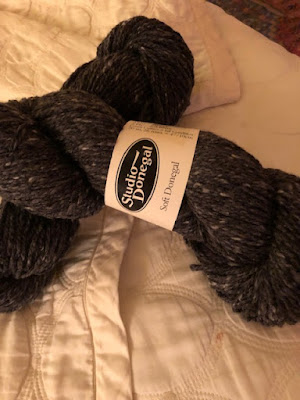 We also noticed a long line outside a lovely French bakery so of course we had to stop for mid-morning coffee and a pastry. We were not disappointed as we sat at a table on the sidewalk and watched the crowds. 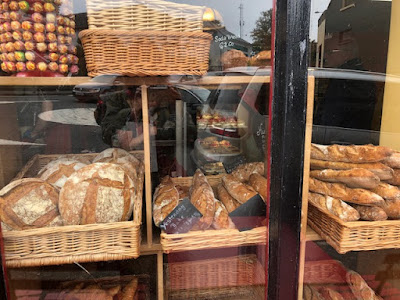 After our delicious break we decided to go in search of the Kenmare stone circle that we had seen on an episode of Rick Steves PBS travel show. Tucked away in a grassy, out of the way corner of Kenmare, we found an actual stone circle. This was another one of my favorite places to see in Ireland.  I'm beginning to think that in another life I may have been an ancient Celt, or maybe a Druid Goddess. Who knows? 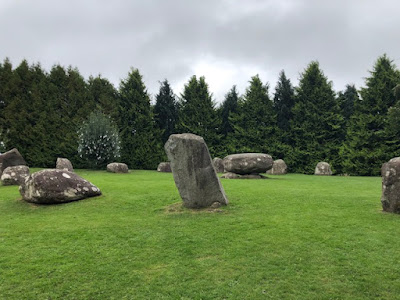 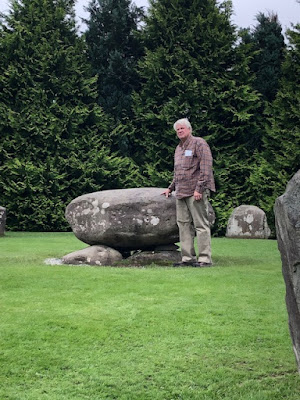 Rich dared to lay a hand on the center stone (sacrificial altar?) Luckily he didn't disappear into another time and place and we were able to continue on our trip the next day.

Later that same day we drove aimlessly around the country roads surrounding Kenmare. One of our discoveries was a small gourmet chocolate shop, Lorge Chocolatier. With a full showcase of chocolates to choose from we made a modest purchase of a variety of chocolates. They didn't even make it out of Kenmare as we began tasting after dinner and, well, one thing led to another! I suggest you check out the link that I provided so you can enjoy a feast for the eyes if not the palate. Lorge also offers classes in chocolate making and if I lived nearby I would certainly love to make myself sick in one of those classes! 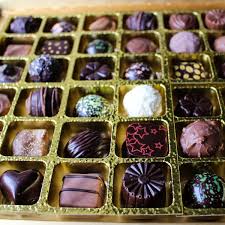 That evening we had our supper in a small pizza shop in town and decided to turn in early because we had quite a few sites to see on our way to Kinsale, our next stop.
Posted by Buckeye Star Alpacas at 12:24 PM No comments: