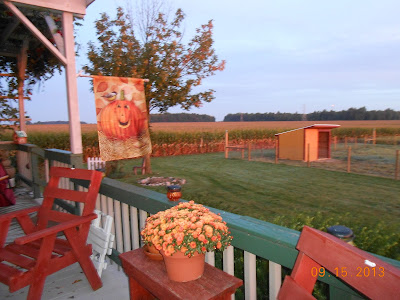 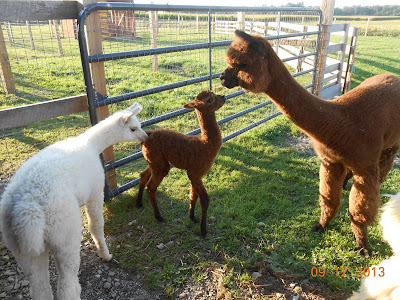 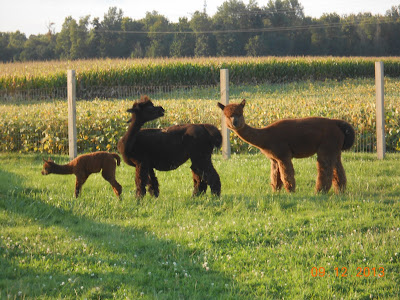 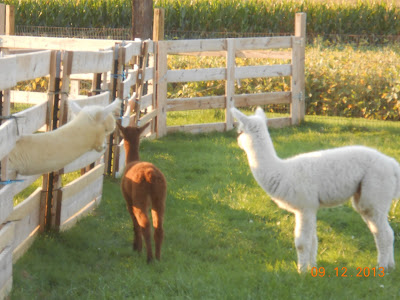 Where is that cool fall weather?

It's been almost a week since our second little male cria was born and he's thriving in spite of the extreme heat. I just came in from a visit to the pasture and barn after a very brief visit to check the herd. The 90+ degree heat is oppressive and it is literally hard to breathe.

The animals all seem to be doing ok. Mama Took likes to put her front feet into the large tub full of water that we keep out there for just that purpose. They have hanging buckets full of fresh water that are replenished several times a day for drinking. This tub is a large one and full of muddy water because of Took's feet. However, whenever I spot her bathing her tootsies and rush out with a camera she steps daintily out of the tub as if to let me know that this is a private spa activity that I have no business capturing on camera.

Firenze and the little one are still separated from the rest in the barn and mama likes to relax in front of the large barn fan on days like this. The little guy sleeps by her side most of the time but occasionally I can spot him venturing forth into the pasture on his own while Firenze looks on protectively. 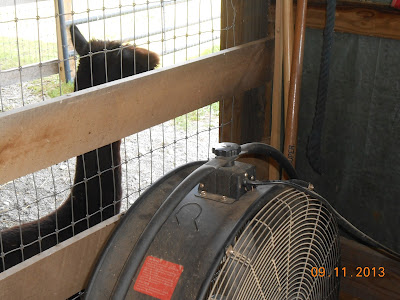 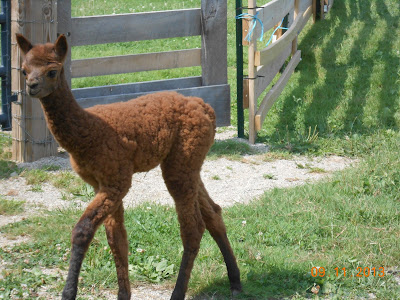 Little brown cria does not have a  name yet. My youngest grandchild, Zaidee, asked for the naming rights and because of the huge time difference between her home and mine I have not had a chance to discuss it with her over the phone yet. Rich had a tendency to call him Brutus, after the Ohio State University mascot. I'm not totally sold on that name. Notice how the corners of his mouth turn up. He looks like he's smiling all of the time. He's a floofy little critter and his fleece seems to be a bit longer and maybe less crimpy than our other little guy, Asterius. I guess it's really a bit early to make that judgment yet.

On these hot, hot days we put a sprinkler into the pasture for the herd. First in the girl pasture and then in Nikko's bachelor pasture. The kids come running when they see me turning on the pasture faucet. Leezza is usually in the lead and has become a real sprinkler hog. She lays down with her chest up against the sprinkler or sometimes even right on top of the sprinkler. The others wait patiently in the wings for their turn until she gets tired of the game or totally saturated on her undercarriage. 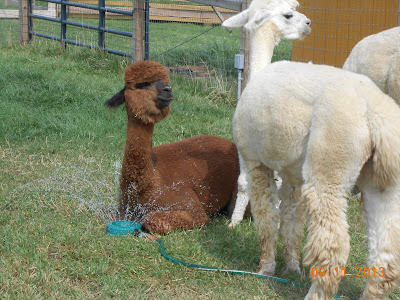 Took waiting for Leezza to move.

This afternoon, Leezza lingered longer than usual, probably because it is much hotter than usual. Today the temperature is supposed to reach a record setting high for September. Most of the summer has been cooler than usual and now, during the waning days of the season, the temperature soars. That's Ohio for you.

Leezza warned Took and Mango away with a little air puff, not exactly a spit. But she did allow baby Asterius to poke his nose in the sprinkler in front of her. 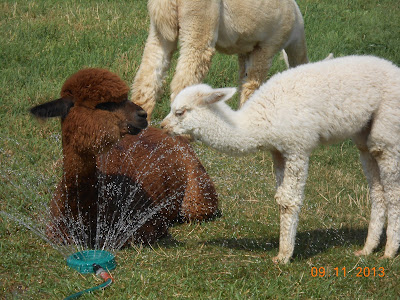 Meanwhile, on the other side of the fence, Nikko looked on, whining; not so patiently waiting his turn. Next year, before the heat sets in, we are going to get a hose splitter and another sprinkler, I think. That way Nikko does not have to wait and I do not have to go out into the heat as often. 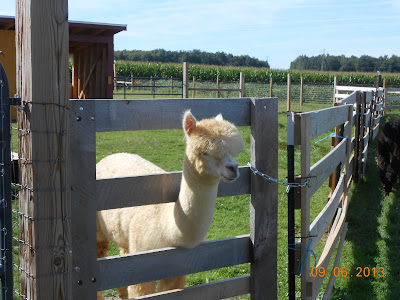 Posted by Buckeye Star Alpacas at 11:40 AM No comments: 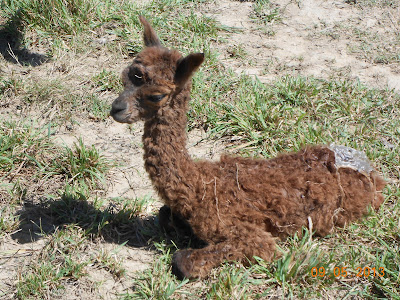 First, let me say that this time I picked the little guy up, turned him almost upside down, (What an introduction to the world, right?) and very carefully examined him. I pulled the remains of the umbilicus out of the way and rubbed my hand gently, but firmly, along his underbelly.  Sure enough, there is a "little" something there. I also checked under his tail. Nothing yet, but clearly not a female.

After class this morning, I ran a few errands and then cruised home through the countryside. It's a beautiful day and I wasn't in any hurry. Other than being as big as a small house, Firenze hadn't shown any sign of labor when I left home  at 8:45. Her due date isn't until September 20, so I wasn't too concerned with being gone from home for a few hours. Upon my arrival at home I saw that the girls and boys were all grazing peacefully in the pasture, enjoying the breezy, sunny day. I took my groceries and books inside and put things away. I checked a few items relating to class and fired off a few e-mails and put some items in the washer.When I am working around the house like this I constantly look out of the back windows to watch the girls in the pasture. I didn't notice anything unusual. About an hour after I got home I took an old canvas briefcase out of the washer and out to the deck to lay it in the sun to dry and this is the sight that met my eyes: 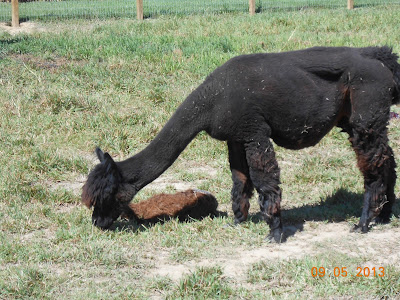 A noticeably thinner Firenze was peacefully grazing beside what looked like a wet, brown rag. "OMG! You did it yourself!" were my first words. I grabbed the camera, my cell phone and a towel and dashed to the pasture where I snapped the little boy's first baby pictures. Very shortly after I pulled the gunk off of him and wiped him dry with a towel he struggled to his feet and took his first steps. Wobbly and adorable. 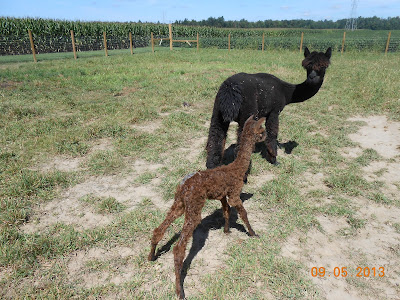 I took a minute to text a picture to Rich, who is at work, and other interested parties, then I picked up the little one and carried him to the nursery pasture. Firenze followed so closely behind me that she stepped on my flip-flop and pulled it off! The entire herd trailed along behind. Those animals are so curious when a new member arrives. I got mama and baby boy corralled in the nursery pasture, weighed the baby (16 pounds), put out fresh hay, fresh water and a generous scoop of sweet feed as a treat for Firenze. As I watched and snapped pictures, the little guy, who could still barely stand up beyond a couple of minutes, started sniffing around underneath his mama. With a little bit of help from me (I redirected his head when he kept sniffing alternately at her chest and behind) he soon began nursing heartily while Firenze stood patiently until he was done. 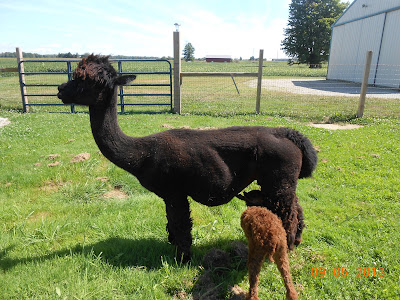 When I left the pasture the little guy was napping while mama stood attentively beside him grazing. 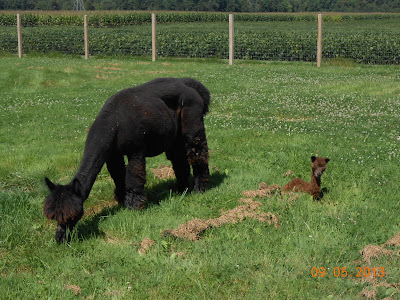 Posted by Buckeye Star Alpacas at 11:15 AM No comments: 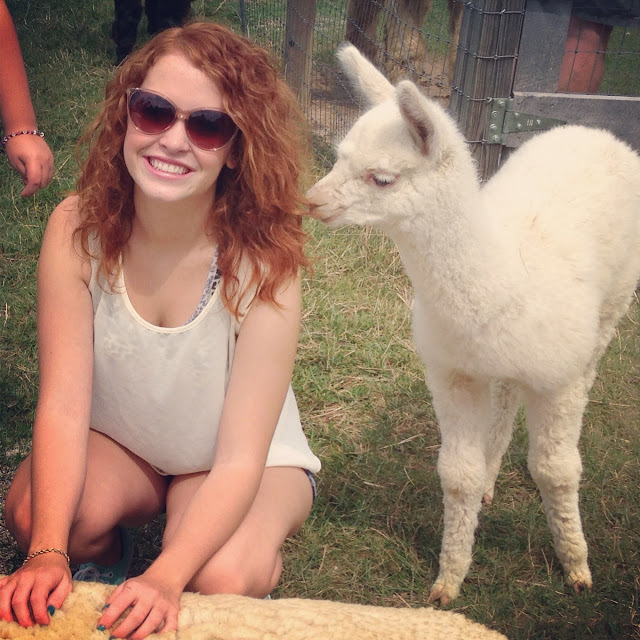 No need to say a thing!
Posted by Buckeye Star Alpacas at 4:55 AM No comments: