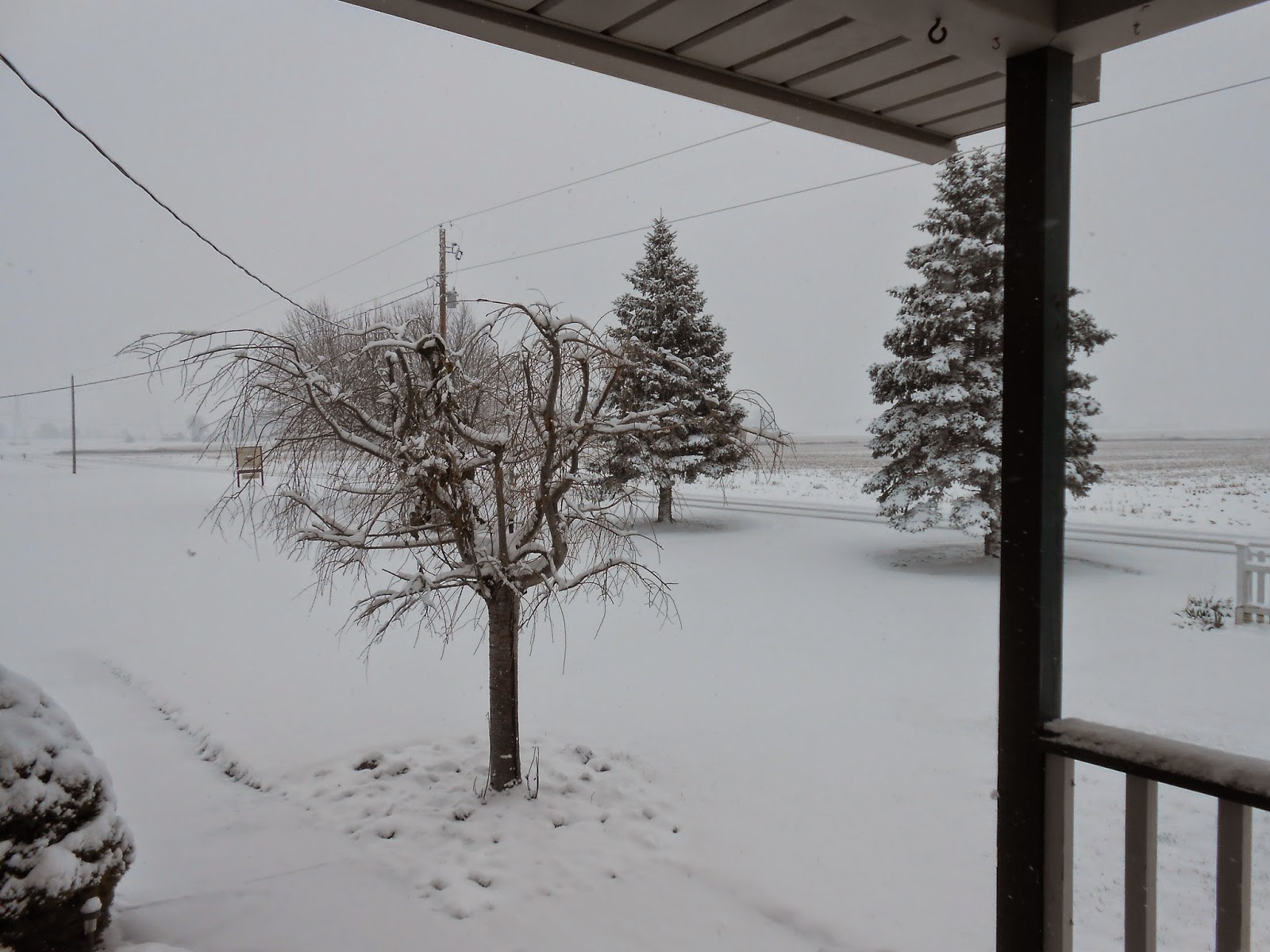 I believe I posted an almost identical picture outside my front door earlier this year; and by earlier this year, I mean last January when we were having record low temperatures and record high amounts of snow. We expect this in January in Ohio, not in mid November before we have even celebrated Thanksgiving! For the past four days we have had high winds, drifting snow and  temperatures in the teens. Normal for January but not November. The drifts in the pastures are above my knees and my saintly husband has been feeding the herd for the past two mornings before he goes to work in the cold darkness of the early morning hours.

Yesterday morning was so windy and snowy that the animals only ventured outside to do their business and spent the bulk of the day sheltered in their barns. This morning it isn't snowing so before the wind kicked up Asterius ventured outside to sniff at the snow and try to graze on the stubble in the areas that had drifted clear. Now only Nikko, with his extremely thick dense fleece, is outside in the snow and Asterius only peeks out of the doorway of the yearling boys' condo. 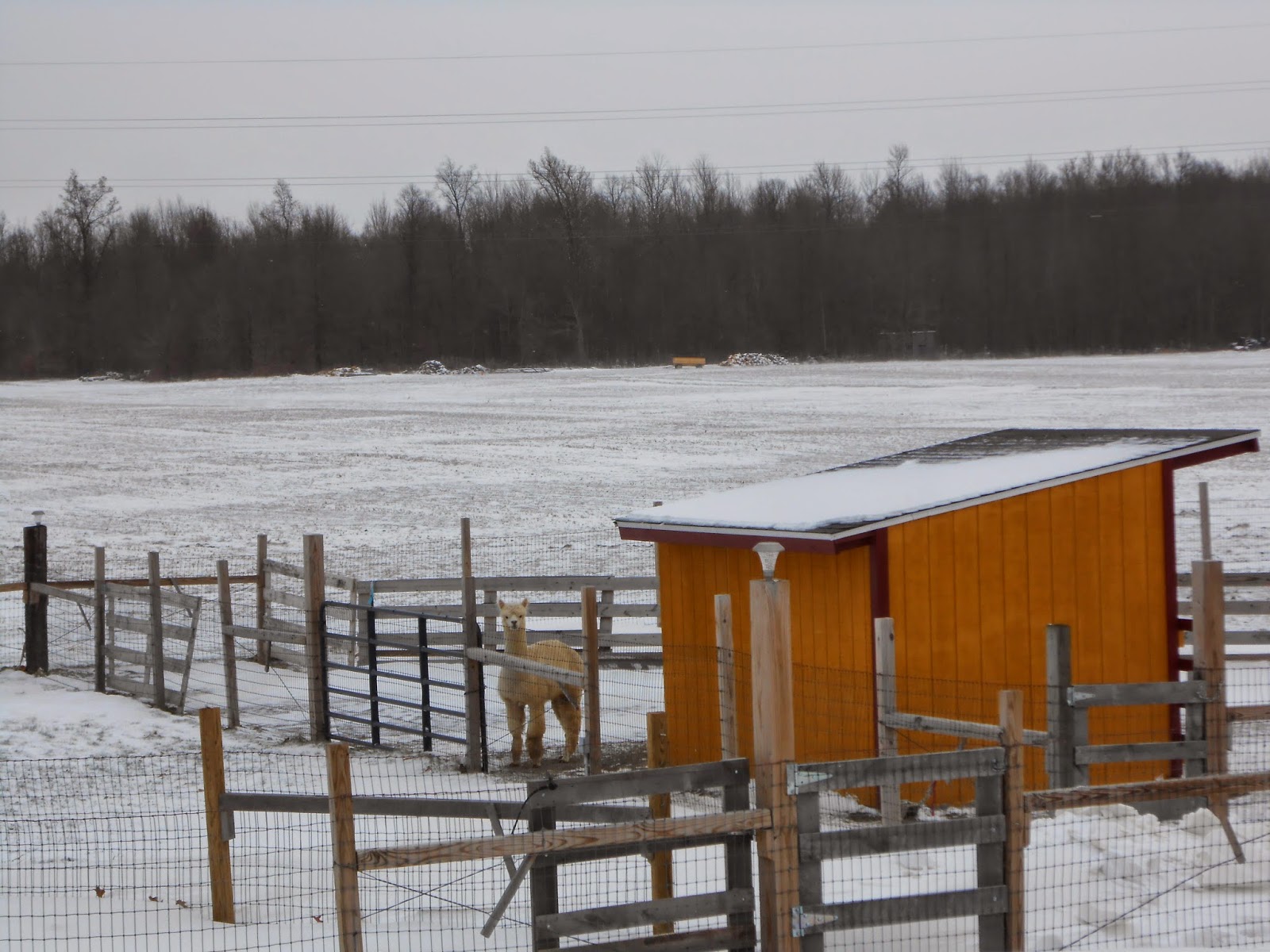 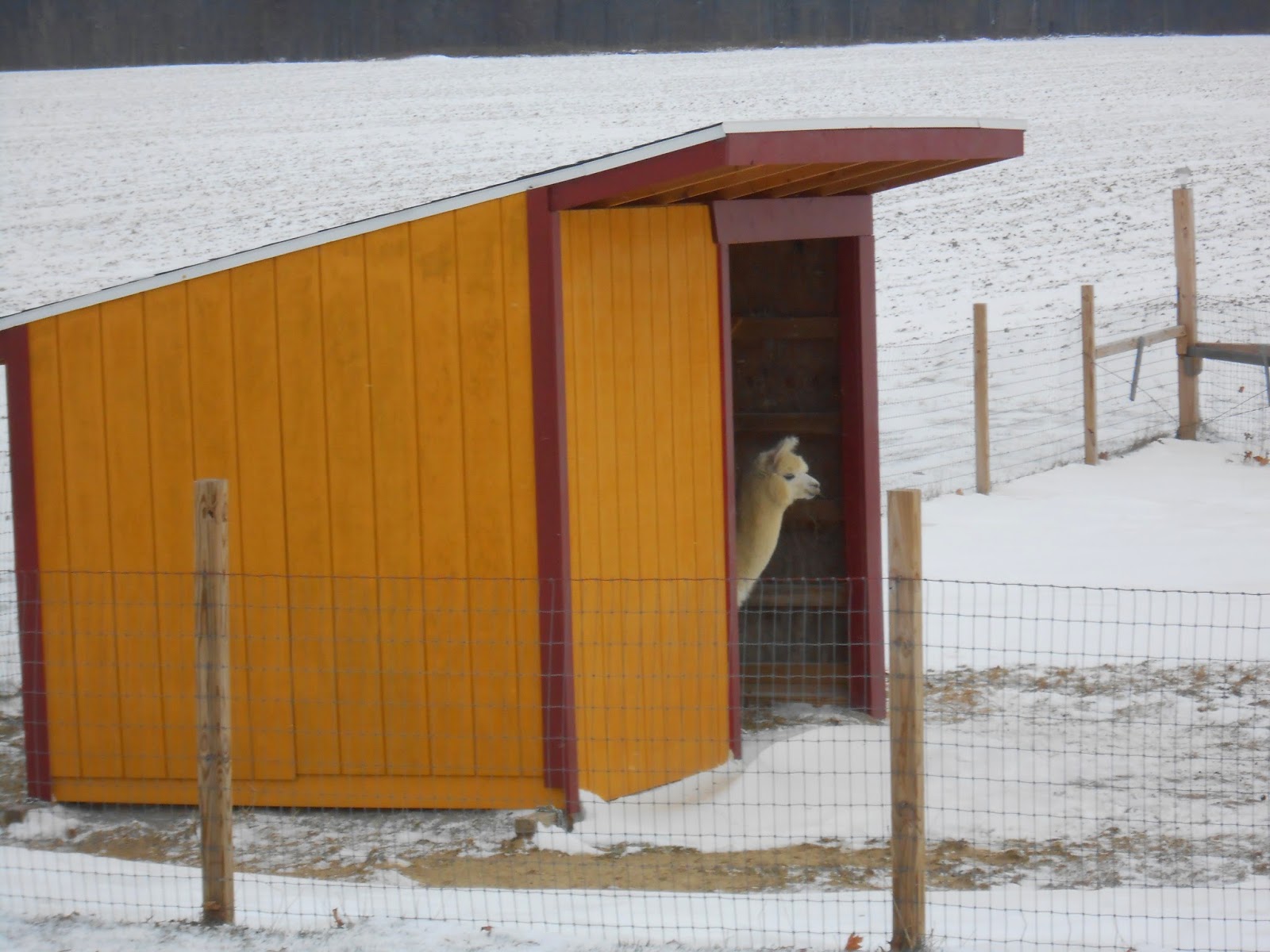 Brutus has the sense to stay inside the condo and only go out when he absolutely cannot hold "it" any longer! He prefers to eat the hay inside and sip from the heated water bucket. As you can tell from the distance of the pictures I, like Brutus and the female members of the herd, do not venture any further out than the back deck or the front porch. I snap the pictures quickly and scurry back inside. Hence the very low quality of the photography.

While I am hiding out from the weather, I am not exactly languishing on the sofa eating bonbons. I have completed several knitted Christmas gifts. I am almost done with this lovely cowl type neck wrap  (from the Lion Brand Yarn website) made from the bulky Lopi yarn that is a combination of Asterius and Took fleece that was processed last summer at Morning Star Fiber Mill. 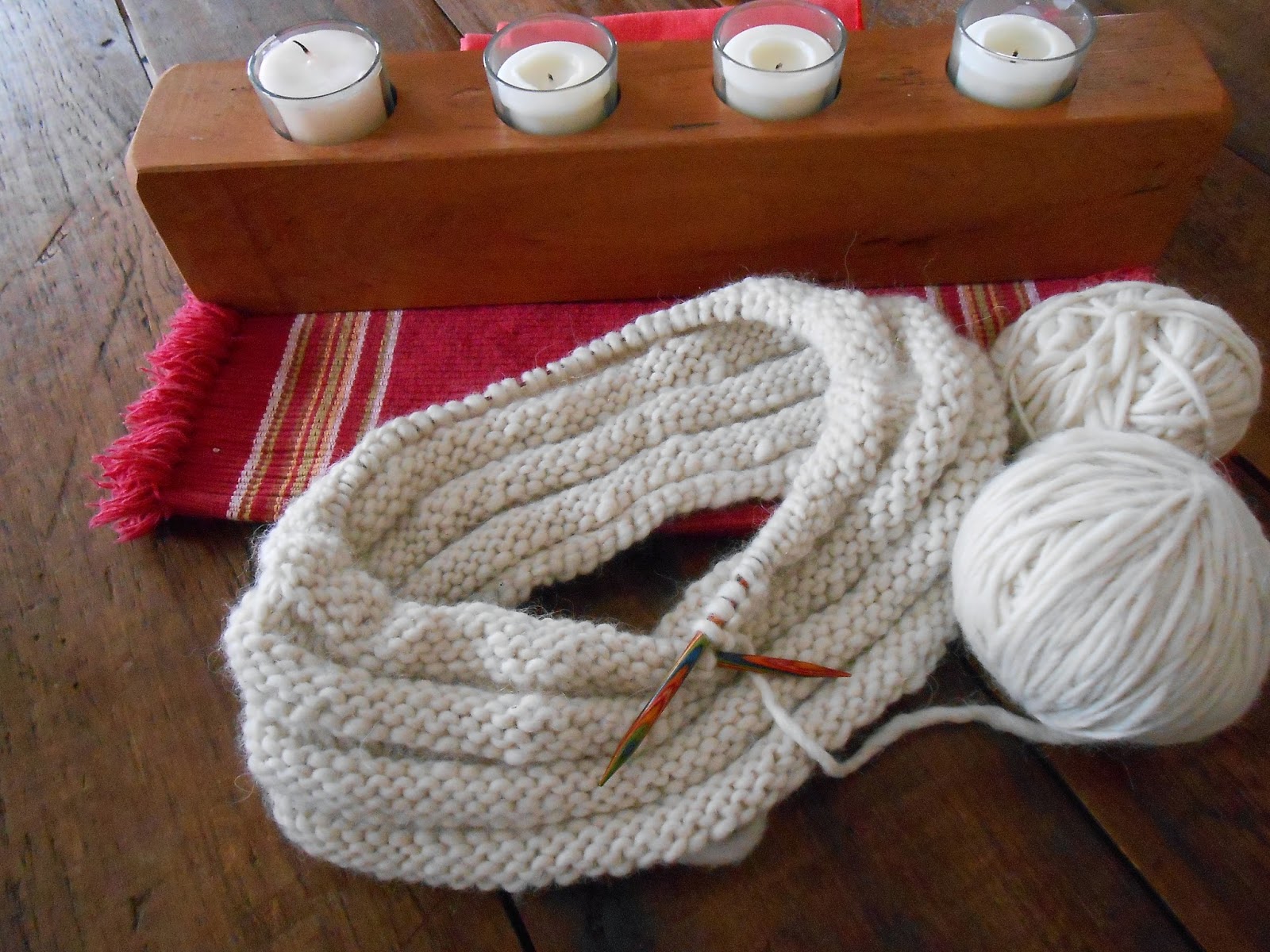 This fast-finish project can be made from one 250 yard skein of the Lopi which can be found on my Etsy store, also called Buckeye Star Alpacas. Click on the link and it will take you right to the store. It is so soft that I am considering keeping it for myself or maybe making another one for me after Christmas. I have also found another really neat source for free holiday project knitting and crocheting patterns. It's Drops Design Christmas Workshop and they have hundreds of free patterns and their holiday section is filled with gifts and decorations for the Christmas and Hanukkah. I knitted a  Scandanavian color worked hat pattern  from their site a couple of years ago after foot surgery kept me inside for a while and It worked up nicely. Their directions are very clear. 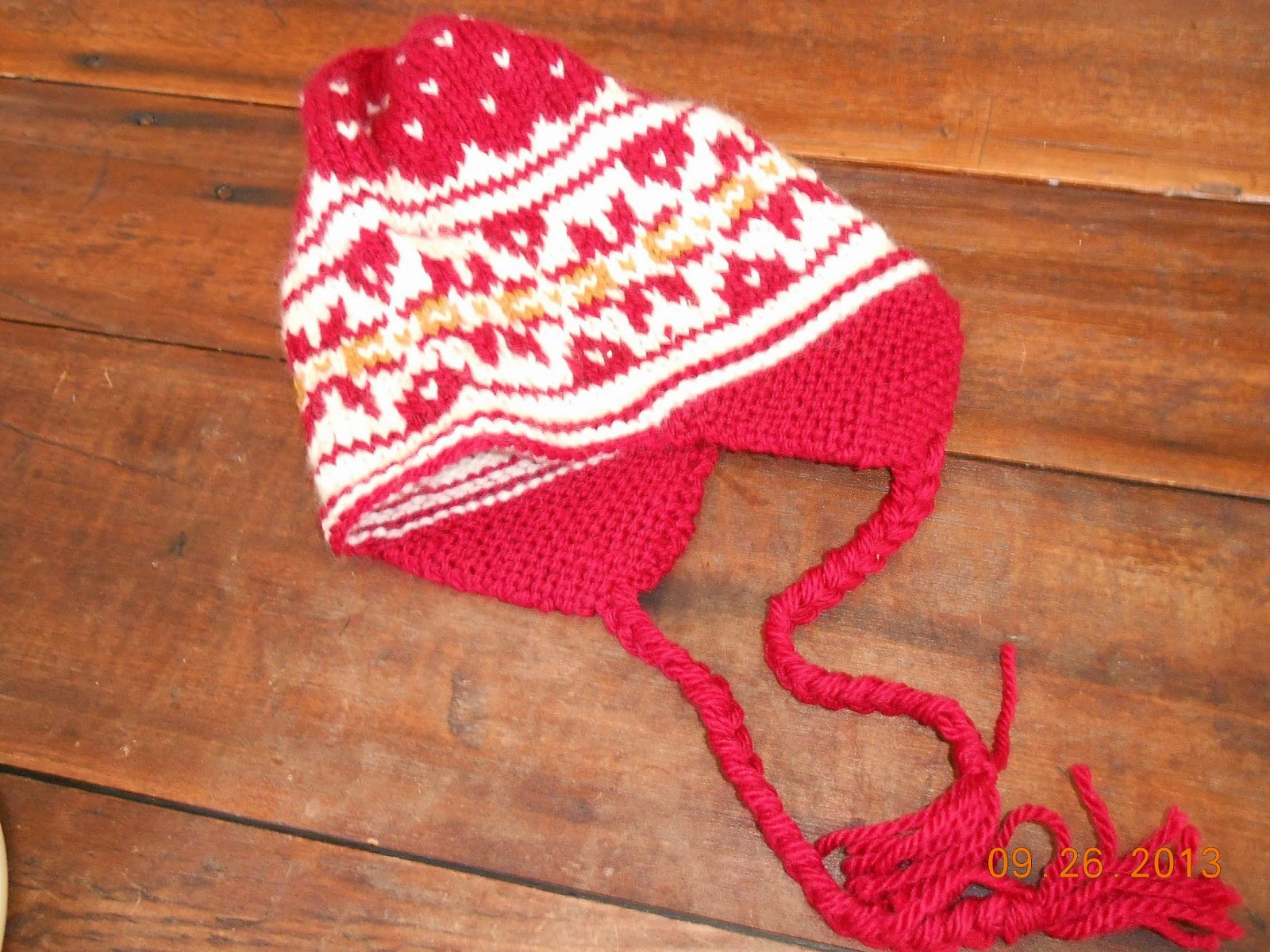 This unseasonably cold weather has totally tanked our fall decorations which usually last until well after Thanksgiving. Although we don't generally put up Christmas decorations until after that celebration, it looks like this year we will be making an exception. The weather is supposed to revert to the normal temps for November on Saturday and Sunday. Rich and I have agreed that it's time to pitch the withered chrysanthemums and frozen pumpkins. 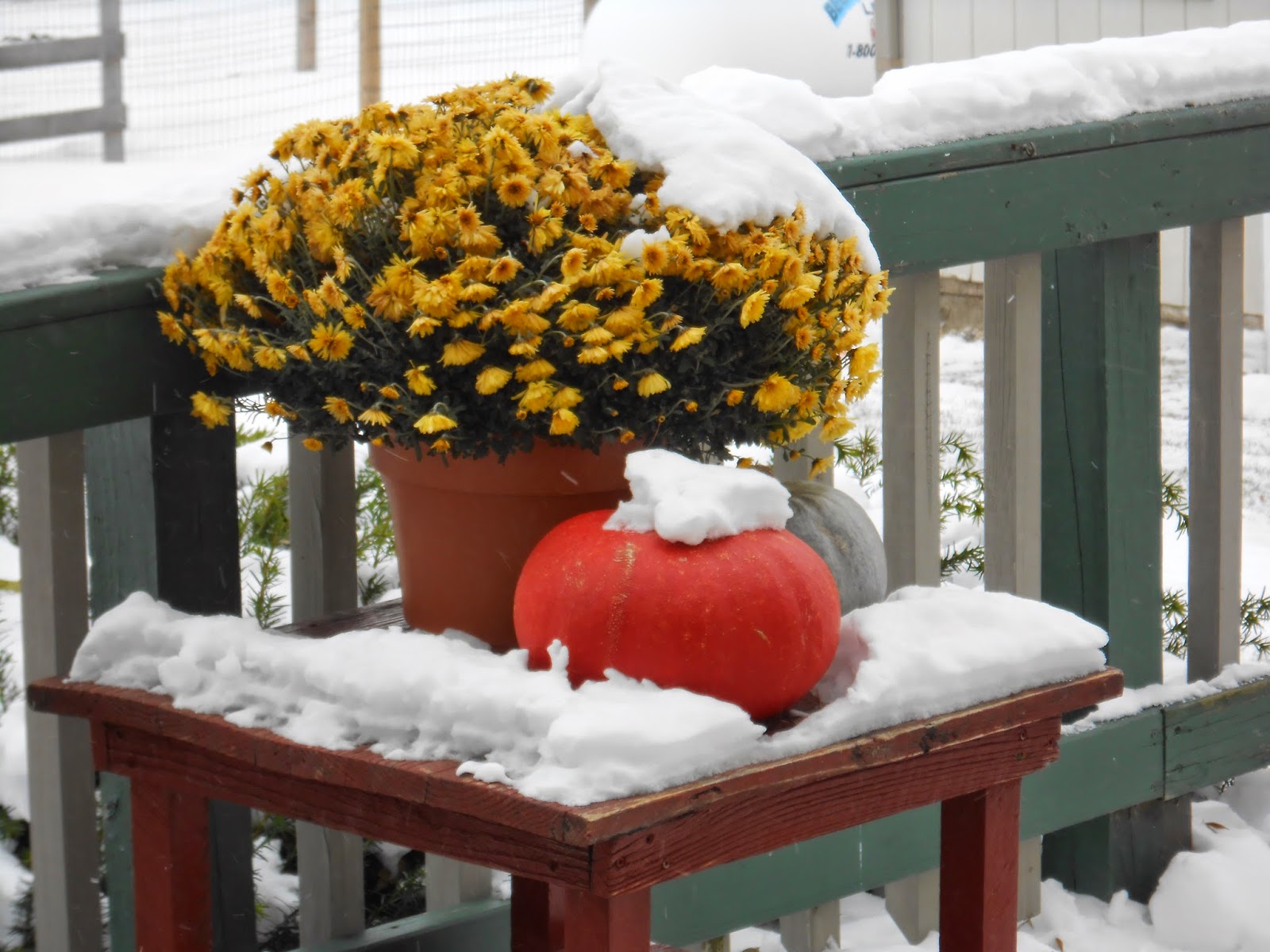 I will be putting up the Christmas tree and decorations in the store and Rich will work on the outside decorations. Look for the life-sized Mr. and Mrs. Snowmen out front under the "shebang."


Posted by Buckeye Star Alpacas at 8:04 AM No comments:

It's a little cliched to say so, but it seems that our little Mocha Latte is growing so fast. When we weighed him last weekend he weighed 42 pounds already. He is less timid and  comes closer and closer when I go into the pasture at feeding time each morning. Mocha has already reached the stage that I like to compare to the human "terrible twos." He seems unable to walk anywhere, jumping about and leaping and twisting all over the place. He constantly pesters his "Aunt" Leezza and "Grandma" Took. The other evening I was peering out the back window and caught him attempting to nurse. It seemed that his mama was kicking him away and running from him each time the little guy tried to poke around under her. I was concerned because his mama, Mango, has been such a good mama for a first timer and shouldn't be self-weaning for several months. It wasn't until she circled away from my sight and came around their condo that I realized he was trying to nurse on Took, his grandma! No wonder she was kicking. From behind, Took and Mango look the same, white. In short, Mocha is a little pest. 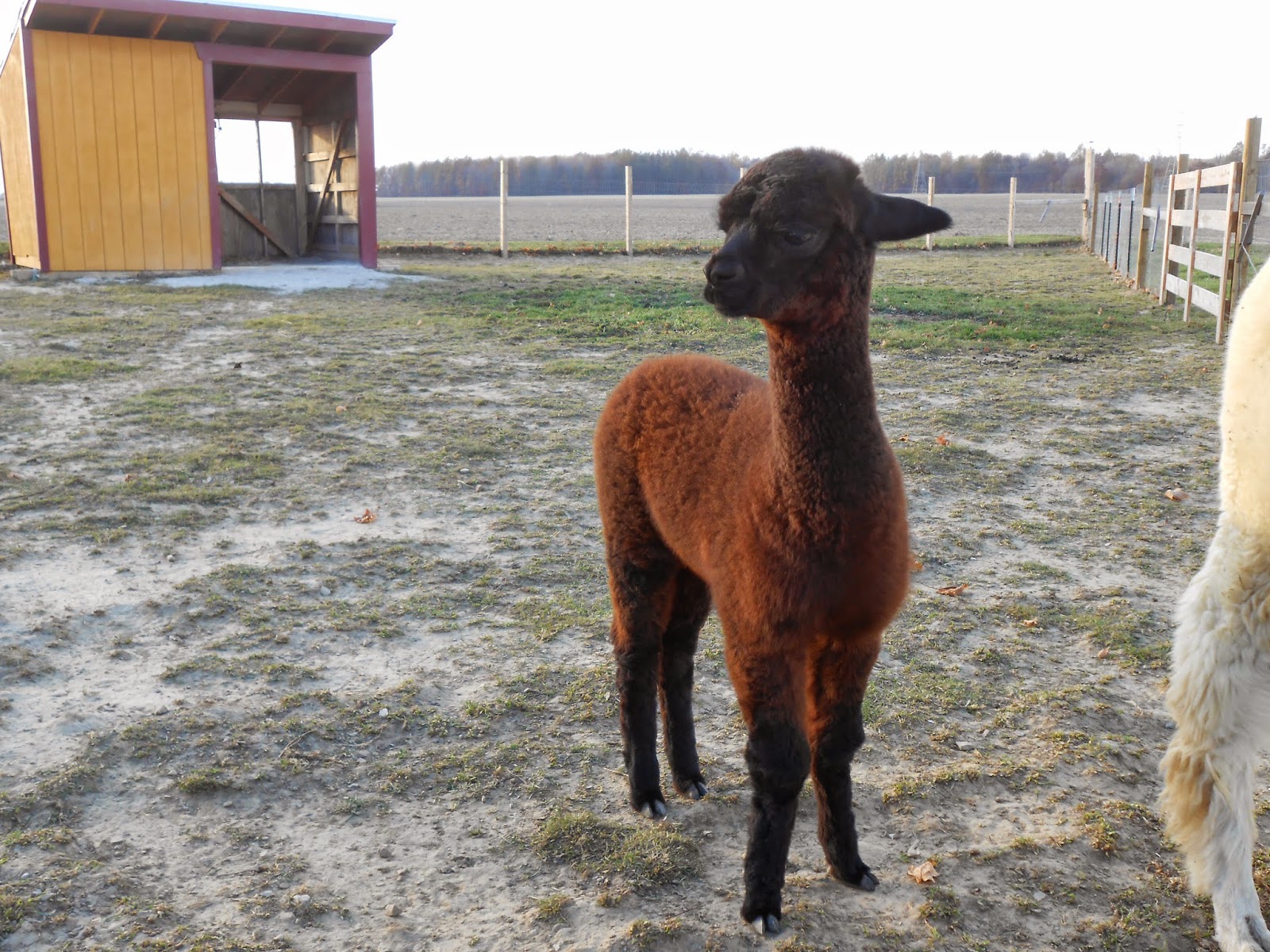 Last month I picked up my last batch of yarn for this year. It is a lovely heathered grey made by combining last year's fleece from our poor departed Firenze's and Took's blanket fleeces. Morning Star Fiber Mill produces such lovely yarn from our fleece. I will be posting this new yarn on my Etsy store this afternoon. It is such a beautiful soft grey heather and I am eager to get started knitting something with it. Someone from my family is going to get a Christmas gift made from soft grey alpaca yarn this year. 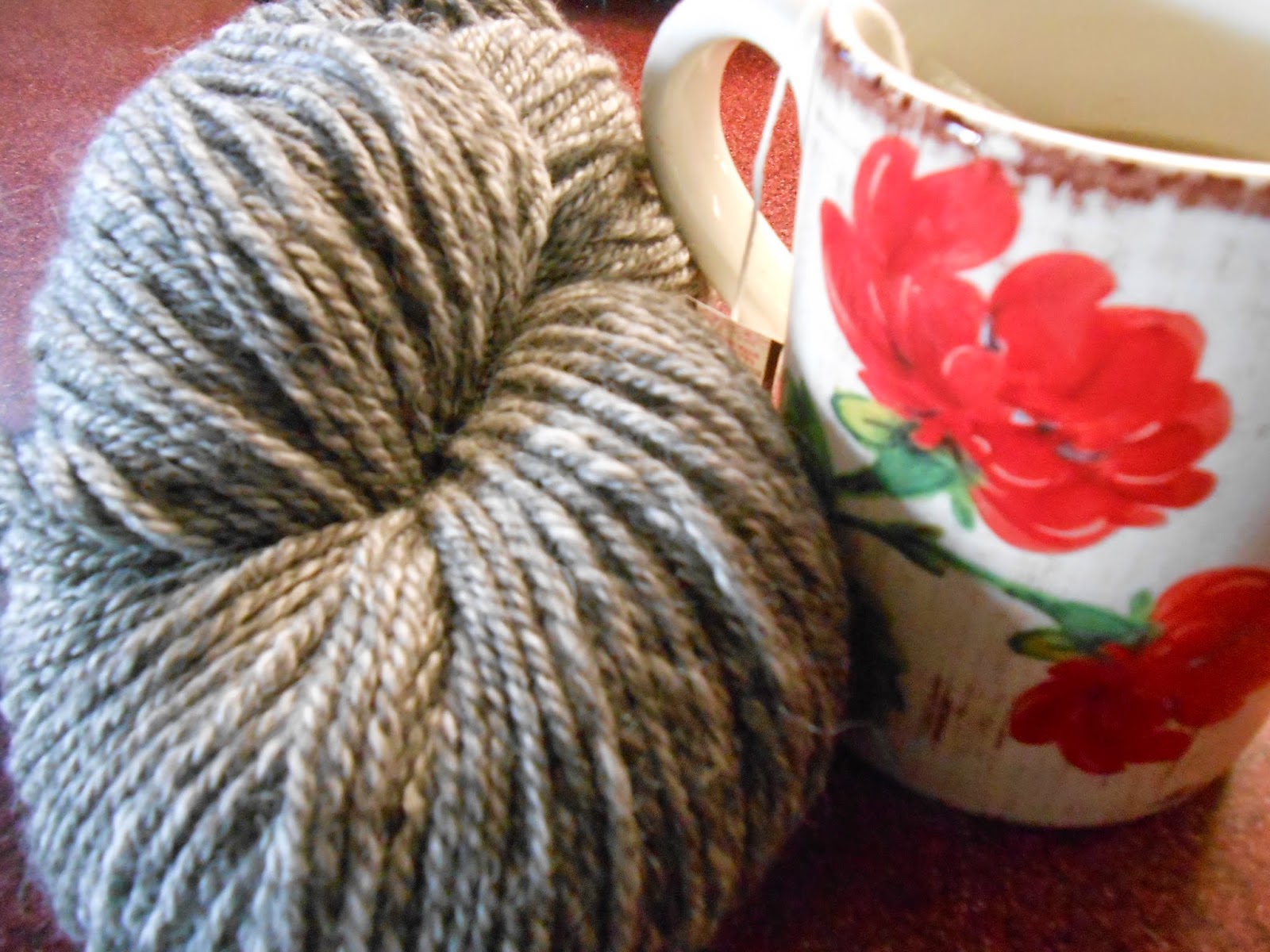 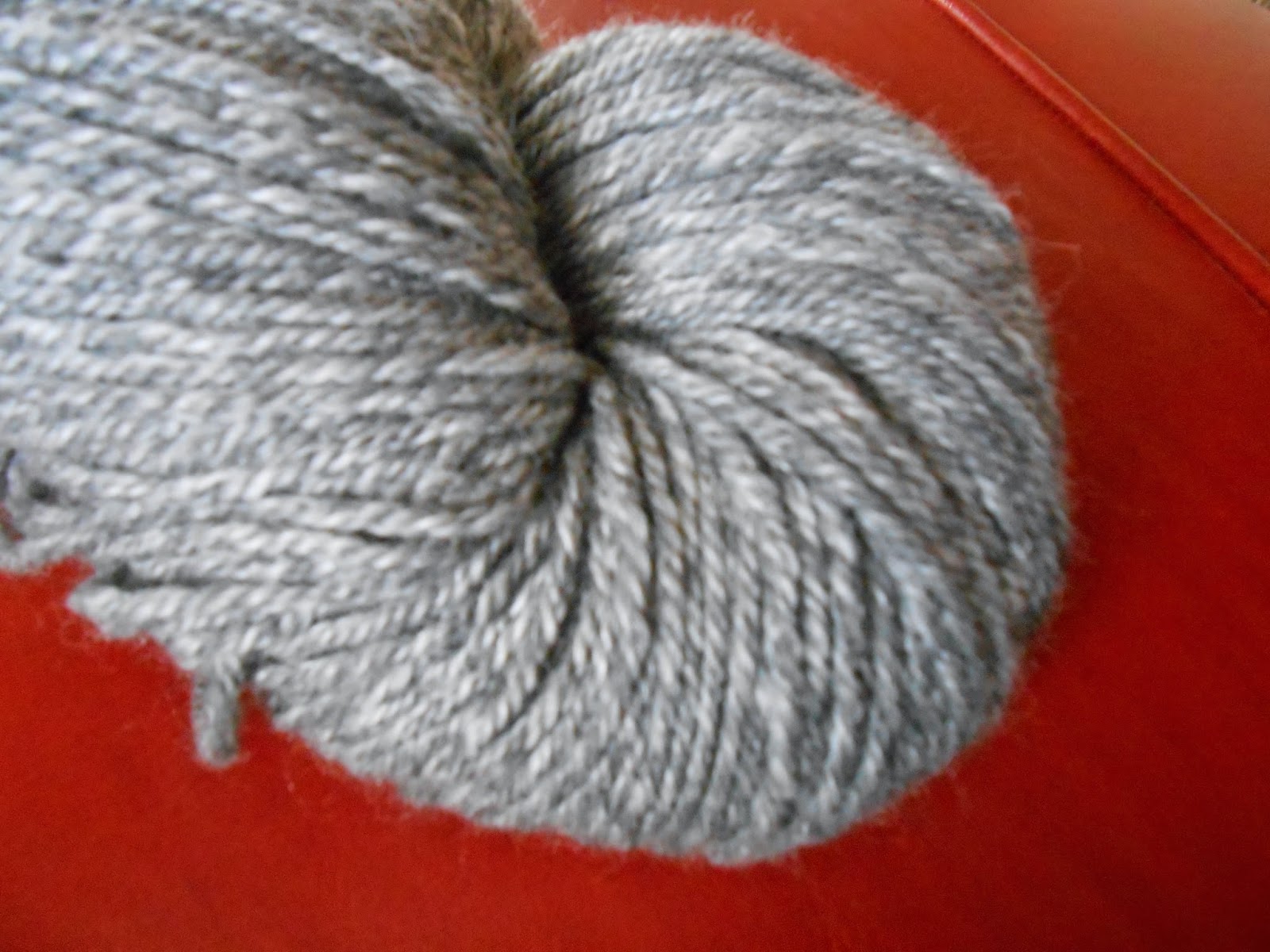 Since today's weather is so typical of November in Ohio; cool, dreary and rainy, I decided to make another batch of raspberry jam this morning. Jam making is a satisfying project for days that could otherwise be depressing. I got five pints of berries on sale at the grocery store the other day because I was rapidly running out of the jam I had made this summer. Besides the fact that I love to look in the pantry and see rows and rows of gem colored jam jars, I also like to have extras to give as gifts for the holidays.

Of course I had to sample some of the warm, ruby red, jam as soon as I had poured the last jar. There is always one jar that isn't completely full. That's the one I allow tastings from and both Rich and I indulge in multiple samples on toast or warm bread. Yum! The rest go into the pantry for gift giving. 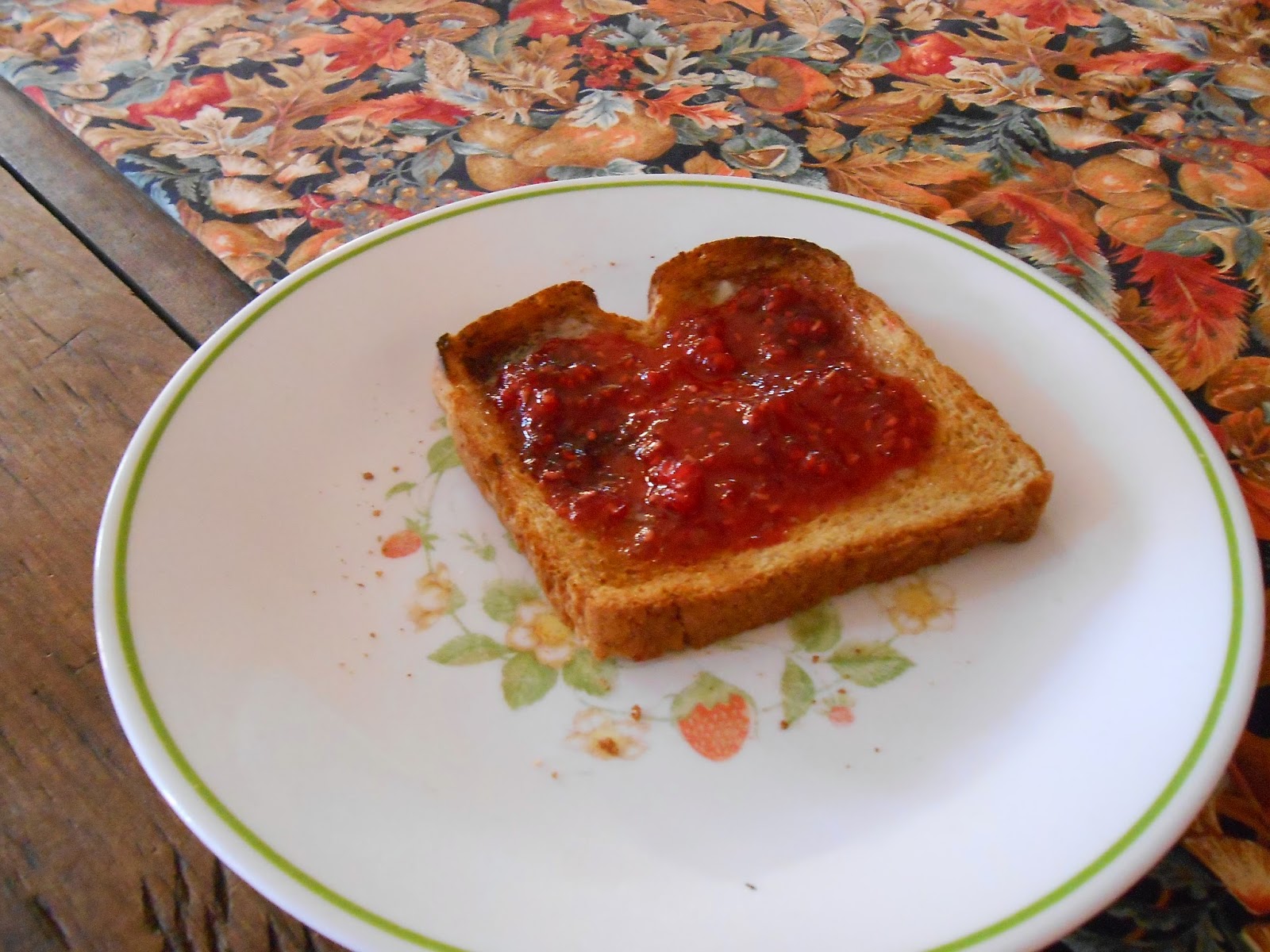 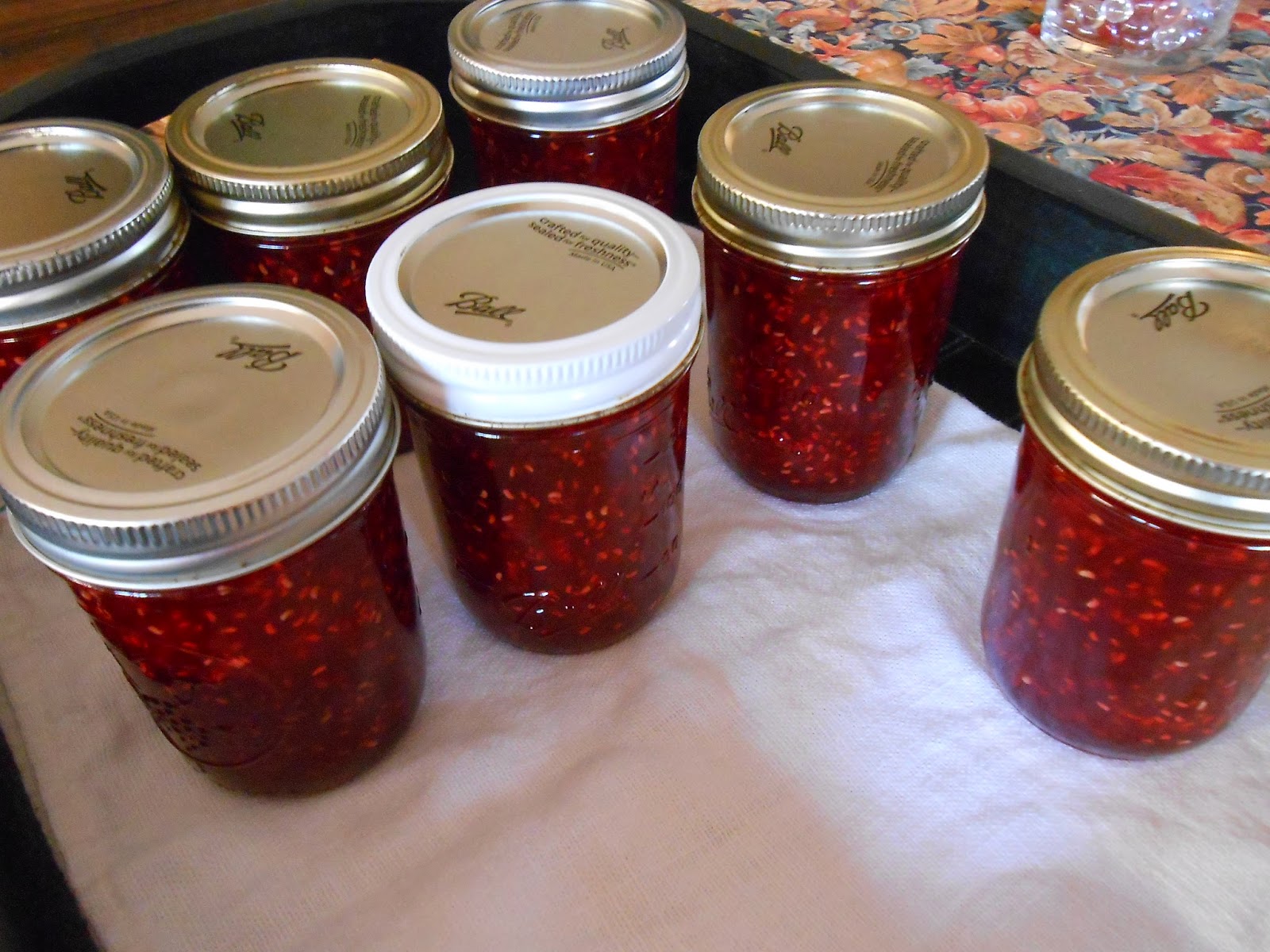 Posted by Buckeye Star Alpacas at 7:30 AM No comments: