First, let me just say that I have been a monumental procrastinator this week when it comes to updating the blog. I had a deadline looming closer and closer as I prepared for a college class that I will be teaching for the first time and that seemed to consume all of my thoughts. I finally finished the prep yesterday and fired off a copy of my syllabus to the dean for inclusion into the files. So now I can concentrate on this.

Early Saturday afternoon, Rich and I went to the fair and spent several hours there talking to spectators and friends. We saw some of his work colleagues and many, many of my former students. I cannot count the number of times I heard my name shrieked across the fairgrounds or the number of hugs I handed out and received. It was so good to see the kids and I told Rich it was probably the last time I will ever be this popular! If any of them read this I want them to know that I expect great things out of them this year because I know they can.

By the time we left the fairgrounds on Saturday evening I think even Rich was filled to the brim with fair food and was satisfied until next year. We picked up Leezza and Mango early Sunday morning to bring them home. Since they had been gone, we had released Took and little Asteri into the west pasture to keep Firenze company. That's where we released Leezza and Mango when we got home. 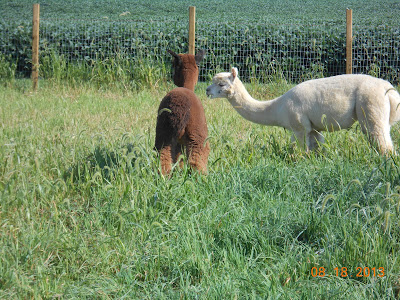 They paused briefly at the sight of the tall grass that they had been missing at the fair and then rushed out into the midst of it and began grazing and rolling in it. 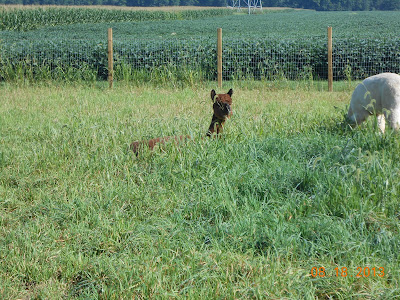 It didn't take long before  they realized that they were back home with their mama and little sister, Asteri. Leezza, Mango and Asteri have the same father; although Leezza has a different mother. So that makes them sisters. Mango was very curious about her little sister, Asteri, who has taken her  place with mama Took. They seem to have bonded and I often see Asteri following close behind Mango as she grazes. 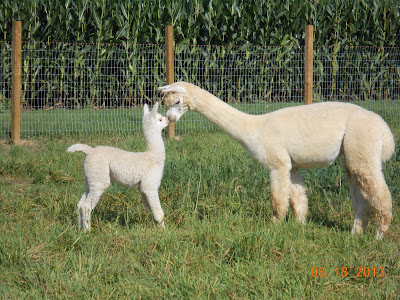 All of the girls seem to have fallen into their old roles in the pasture. Firenze is still the uncontested queen of the pasture. Took is the patient, serene mama, looking after her little one. Mango is the curious one and Asteri seems to be following her example. Leezza is still the petite little ballerina, dancing through the pasture. One thing I have noticed is that all of the big girls are very protective of the little cria. At sundown, when Asteri ventures out into the pasture for her evening running and pronking session, if mama Took isn't with her, then Leezza or Mango is standing patiently by, watching over her. They all gather around her whenever the dog or strangers are at the fence. 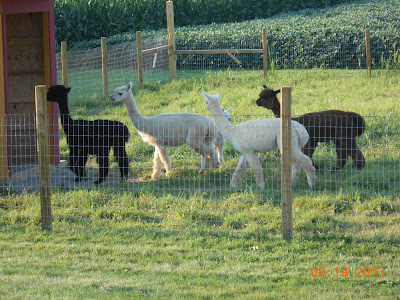 The female members of the herd don't completely ignore our Nikko, though. Mango is still often drawn to his side of the fence to graze with him and every morning when we look outside upon waking, all of the girls are sleeping peacefully by the fence with Nikko on the opposite side. Then in the evening at sundown, when Asteri is frolicking, he joins her by running alongside when she is near the border fence of the two pastures.

Firenze's belly is growing steadily and within the next three weeks or so we will have another addition to the herd. Rich and I are anxiously awaiting the new arrival.