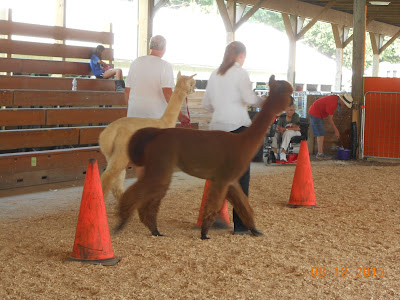 Last evening, after 24 hours of nervous anticipation; wondering whether Leezza and Mango were coping well at the fair, and hoping that Leezza wouldn't balk when Pressley put her through her paces during the judging, all of our anxiety was put to rest. Pressley, who is a seasoned veteran when it comes to 4-H competitions, competently led Leezza through the obstacle course and achieved a very high score for a first time alpaca competitor! With her mom, grandparents, aunts, cousins and Rich and I looking on, Pressley shut out all the noise and distractions of the surrounding fair grounds and won two trophies, one for the obstacle course and the other for showmanship. 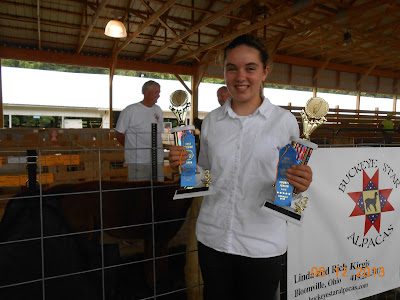 Pressley was the only 4-H'er entered in the alpaca competition and you'd think that would be an automatic win. Not so. The judging is done using a point system where each element of the obstacle course is worth a number of points and the outcome is based upon the total number of points. The showmanship component points are earned based upon questioning by the judge about the technical aspects of caring for alpacas. Pressley excelled in both categories and Kevin, the judge,  praised her performance as, "exceptional for a first timer." He also felt that it would have been a good experience for her to have other 4-H'ers to compete against and that she still would have been a stand out in the field. 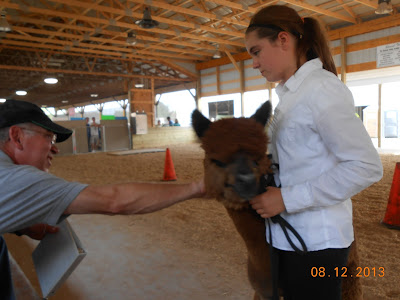 Rich and I felt that this entire experience was a great success and we both learned as much if not more than Pressley. The judges comments to the audience after the competition was finished gave us some valuable information about each of our animals. We learned that Leezza has an exceptional head configuration and a beautiful tail. We learned that although Mango's first fleece is very crimpy, Leezza's second fleece is finer.

As Rich and I talked over a dinner of "fair food" we both agreed that our anxiety had been unfounded and that this had been a valuable experience. Pressley is a great little show woman and has a knack for dealing with unpredictable animals like our alpacas. We would be honored  to work with her again in the future.
Posted by Buckeye Star Alpacas at 4:56 AM