This evening at approximately 7pm our Took gave birth to a beautiful, delicate little girl. We haven't weighed her yet because we were surprised and more than a little flustered. We had been gone all day on an excursion on the Cuyahoga Valley Railway with two of Rich's brothers and their wives. We arrived home at a little before 8pm to see the girls huddled together outside their condo. They were transfixed by something on the ground between them. I notice this curious little scene as Rich was pulling into the garage and I ordered him to back up. That's when I saw the little, white cria. He parked and he rushed to the pasture and I hustled Callie into the house, grabbed the camera, threw on a long sleeved shirt (mosquitoes) and ran back out. This is the little girl's first picture. 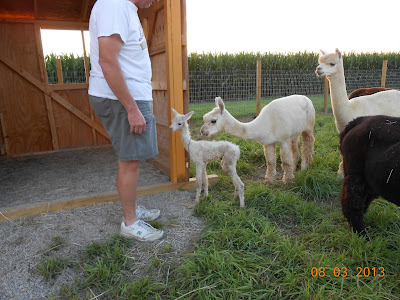 Rich gently lifted the baby and carried her into the barn as mama Took followed closely beside him, humming with concern. The other three girls trailed curiously along behind. The cria was still wet and had a bit of placental tissue hanging around her neck that I removed as soon as Rich put her down in the barn. I rubbed her vigorously with a clean towel and left her to her mother. 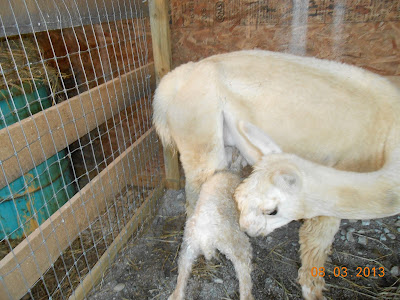 The little sweetie pie tried several times to nurse and seemed to have difficulty finding the right spot. When she finally found a teat she latched on and sucked away but none of her efforts lasted long and they seemed to exhaust her. The cria settled down in the hay and Took hovered nearby. Rich and I went inside to leave them to their own devices, hoping that natural instincts would take over. 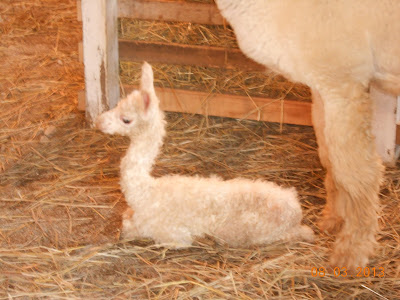 When we checked her an hour later she hadn't moved from the spot and seemed really tired so we mixed up a bottle of colostrum formula and Rich held her as I fed her. She was ravenous and obviously hadn't gotten anything from Took. After eating her fill she wandered around the barn checking out every corner, Took following closely behind. She settled down in the straw and seemed tired after her efforts so Rich and I turned out the lights and came back into the house. We will be checking on them every few hours overnight to make sure that the little one is eating enough and hopefully, Took will take over and feed her. More tomorrow. 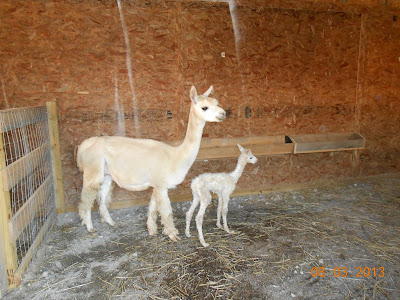