It's been 30 years since I've had to get up at intervals through the night with a baby and let me tell you, as difficult as it is to lose sleep when you're 23 it's waaaaay worse when you're a grandma. At 10:30 p.m. Rich set the alarm for 2:30 a.m. and he went promptly to sleep as usual. Men! I was still so keyed up that I stayed up for another hour. I performed my usual nighttime beauty routine and then tried to settle down. First, the blog. I was dying to share the news with the rest of my circle of friends, so many of whom had requested me to notify them as soon as we had a baby. After that, I was so worried about  Took and her new cria that I felt compelled to fire off an e-mail to Amy, our mentor at Amy J's HomesteadAlpacas , to tell her about the birth and to ask her advice. Of course I had my "to do" list of tasks to be performed after the birth of a baby. But Rich and I were more than a little worried that Took hadn't passed the placenta and didn't seem to have any milk yet.

When that alarm went off at 2:30 I seriously didn't know where I was for the first few minutes after waking. I stumbled into my clothes, sprayed Off on my ankles and neck; then washed up and made a batch of colostrum to feed the baby. Rich and I headed out into the dark, silent, starry summer night. In the barn we found Took lying close to her baby. Rich held the little one while I pried her lips apart and put the bottle into her mouth. We managed to feed her a couple of ounces as Took looked protectively on, humming her concern.

We left Took and the little one sleeping in the barn as the two of us took a minute outside to gaze at the stars in wonder, both of us overcome by the awesomeness of the circle of life. 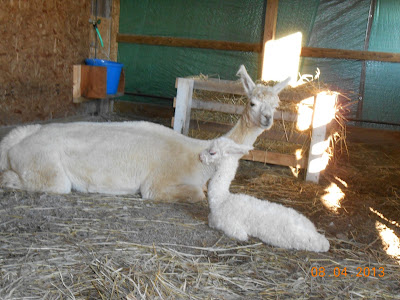 At 7 a.m. when we returned to the barn we found a considerably fluffier baby dozing beside mama Took. We also found a portion of the placenta, which I cleaned up while Rich fed and watered the other animals. Took got an extra portion of sweet feed along side her breakfast. It seemed like she deserved it for presenting us with such a beautiful cria. This time when we woke them up we waited and watched as the little girl tried to find the source of her breakfast. It didn't take her long; but again, she didn't seem to be getting any milk and gave up easily. Rich gently picked up the baby and sat in the old deck chair that he had left in the barn the night before. Tookie watched our every move up close and personal as we fed the little one a few more ounces of colostrum formula. In the early morning quiet of the chilly barn the feeding time was a very moving experience for all four of us. 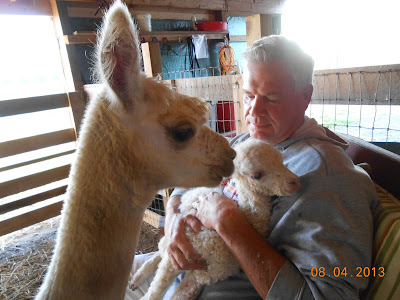 Took was still straining and moaning quietly whenever I touched her so we called the vet who came out around noon. He removed the tissue that she was straining to expel, gave her a couple of shots designed to help her produce milk, and actually milked some colostrum into a cup for us to feed to the baby later if needed. At this point both Took and the little one were exhausted so we left them alone to relax and let nature take its course, so to speak.

When we checked back an hour or so later, baby was nursing eagerly at mama Took's side. This was a sight as beautiful to us as any painting of Madonna and child by one of the old masters. 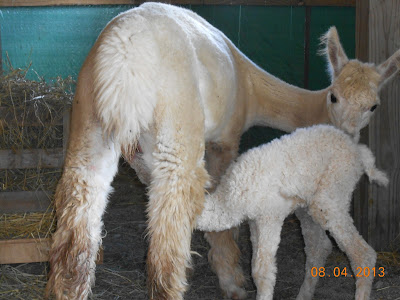 Through out the evening last night and all day today Took's pasture mates, Leezza and Firenze, and her elder daughter, Mango, kept tabs on the situation by peering occasionally through the window to check out the situation. 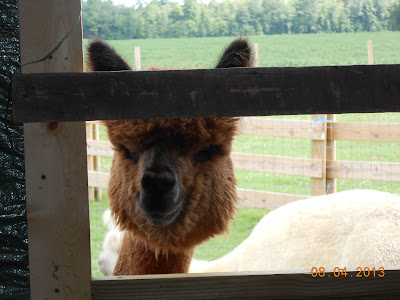 Rich and I were discussing the events of the past 24 hours and we both agreed that sharing our home and our life with these gentle, fascinating creatures was a good decision. They have brought  a challenging learning experience along with  a peace and contentment that we never expected. And today we have a new little star in the herd for we decided to name her Asteri, the Greek word for star. She is the first little star to be born at Buckeye Star Alpaca Farm. 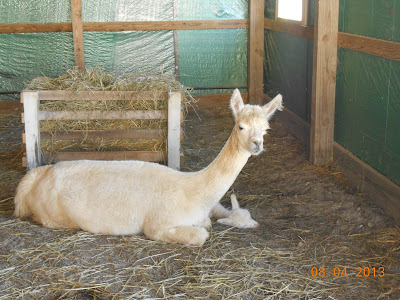