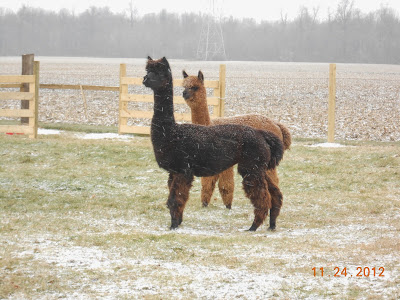 Our beautiful black Firenze died shortly before sunrise this morning. She had been battling a particularly insidious intestinal parasite for some time and, in fact, had seemed to be winning for the past week. Apparently this particular parasite is one that can lie dormant for years and then flare up when the animal is under stress, which is what happened when her cria was born in September. Since then the vet had been treating her and things seemed to have improved.

Then yesterday, when Rich went out to feed her she was reluctant to get up; instead of being the first one at the feeding trough as usual, she was the last. Because it was so bitterly cold and windy yesterday, Rich had confined the herd to the barn. When checked, Firenze was laying peacefully along with the others in the straw. Then when we went out to feed the animals at 4:30 Firenze was "down" and  did not lift her head when we entered. She was breathing with difficulty. We called the vet  and she arrived within 30 minutes.

Firenze was diagnosed with pneumonia and possible anemia by the vet who told us that this parasite had compromised her immune system. She gave Firenze several shots and helped us put the animal in a kush and prop her up with bales of hay on each side. Rich checked her before we went to bet and there was no change. When we went out at 5:30 this morning she was gone.

From the moment she arrived in October, 2013 she assumed her rightful position as the Queen of the Herd. Took, Leezza and Mango, who had arrived in September, 2013, had all been very timid and slightly disoriented until then. From the moment  Firenze emerged from the back of the minivan that was her unconventional "ride," and entered the pasture the others deferred to her and followed her lead. They no longer shied away from Callie, who chased along the fence stirring them up on purpose. Firenze walked calmly toward the fence where Callie barked, and faced her down. Callie realized immediately that Firenze wasn't easily scared off and in fact might be a threat. The other girls followed suit and stood their ground...right behind Firenze!

When Firenze entered the barn, the rest followed. If she wanted to graze in the pasture or just bask in the sun, the other girls did the same. Firenze got the preferred spot at the feeding trough, the hay bin or out in the pasture and when any of the others dared to challenge her they got an "air spit" or a neck nudge from her as a warning. She easily delivered an adorable brown male cria in September  and proved to be a nurturing and protective mother.

Rich named the little guy Brutus in honor of the Ohio State mascot. He is a bit small for his age, but he's healthy and growing steadily. He started eating solid food and grazing at an early age, probably because Firenze's milk didn't contain quite enough nutrition for him. The vet assured us that Brutus will probably do well on solid food alone. We will watch him closely for signs of mourning and hope that the rest of the herd will offer comfort to him. He will miss his mama, Firenze. We will, too.
Posted by Buckeye Star Alpacas at 6:15 AM