I just had to go out for a walk this afternoon and take advantage of the dry pavement, mild breeze (as opposed to the gales we've had lately) and the beautiful sunshine. Callie appreciated it, too. She's always up for a walk and fairly dances whenever someone picks up her leash. There'll be more snow tonight and tomorrow. We will again be forced to exercise inside; but for today, we walk.

Last week, when the temperatures were 50 degrees lower, at minus 15, with blizzard force winds, and even Rich's work was cancelled, both of us vegged inside. The only time "we" (Rich) went out was to perform routine care of the alpacas. On Sunday the 5th, the eve of the temperature dive, Rich's brother, Danny, and I went out to help round up the animals and lock them in the barn. Rich even rigged up a barrier between the "girls" side and the storage area in the entryway  so that Nikko could be confined in the main barn, too. I believe that's the last time I went out for the next three days. 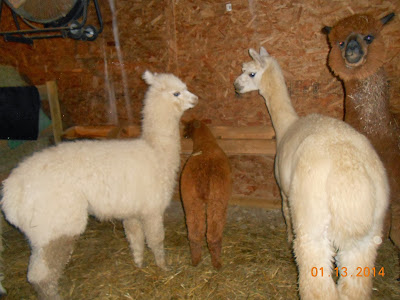 When the temperature moderated a bit on January 8th, I accompanied Rich out to the barn when he got home from work to transfer Nikko to his pasture and open the door to free up the rest of the herd. Rich carefully slid open the main barn door a crack so as not to let Nikko escape. Imagine our surprise when that proved totally unnecessary. Nikko was gone! After a moment of panic we realized that a very happy Nikko was peering at us from among his harem on the other side of the gate. Somehow he had jostled the latch loose and entered the girls boudoir. 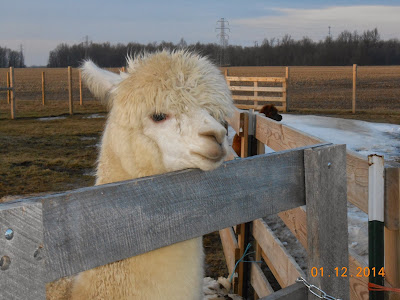 We quickly cornered the little stud, harnessed him up and led him over to his own pasture. Our beautiful Leezza seemed unconcerned. Mango, who is supposed to be pregnant and her mother Took, who is not, were both stressed out and mouth breathing. This mouth breathing is something alpacas do when they have "sour mouth" which occurs after they have hocked up a spit from the depths of their three-chambered stomach. Alpacas have three categories of spits. The first is just an "air" spit; a warning to back off. The second may contain some saliva and grass remnants and is a more serious warning that you're really bugging them. The third contains partially digested matter and slimes the recipient leaving an awful smell. Fortunately, unlike llamas, alpacas rarely spit at people. I am pretty sure that Nikko was trying to "sow his wild oats," to use a trite old metaphor, and probably got the big spit from Mango and Took.

Our dilemma now is, Mango is pregnant, and Took is....well, who knows? We had planned to breed Took to Nikko but not until late summer. Alpacas are pregnant for 345 days; with an margin of 5 days either way. No one really wants to have crias in the middle of a bad winter like this one so most breed for late spring or early fall births. Mango and Leezza are due in late August of September and we were planning to breed Tookie in spring. The choice may have already been made for us. 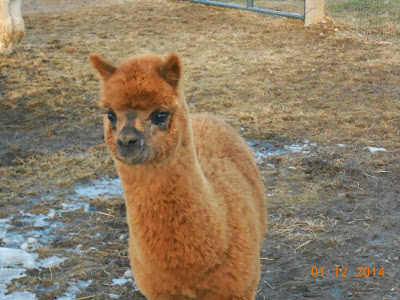 Little Brutus is doing very well. He is a voracious eater and doesn't seem to be mourning his mama Firenze. We miss her and the pasture seems to be missing a certain something without Firenze. Mango and Leezza, Brutus's big (half) sisters do seem to be looking after him. Mango and Leezza hover near him in the pasture and let him sleep near them at night. He's a survivor, no doubt about it. 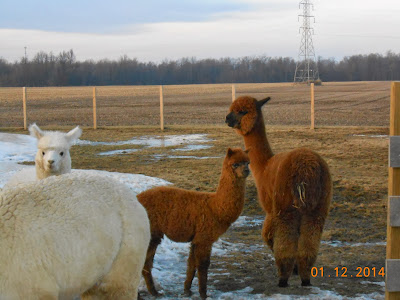 Just one more totally unrelated comment...Happy 13th Anniversary to Rich, undoubtedly the most patient and thoughtful man in the world. 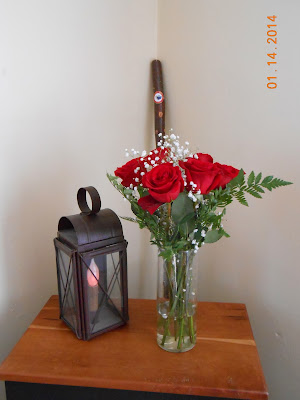