My husband will tell you that I have been growing increasingly more grumpy the longer I have been confined to the house by the frigid weather...and he would be right! I have snapped at him for no really good reason on several occasions over the past four or five days. Yesterday Rich even told me to go visit the grandkids who were out of school today and that involves a drive of an hour and a half. Instead I contacted one of my good friends and drove over to meet her for lunch today. A wise move. We arrived at the restaurant at noon and two hours later, when the place had emptied out and the servers were cleaning up the buffet and shooting irritated looks at us we were still chatting. We both must have needed this outing.

This evening, just after Rich got home and before we sat down to supper, we went out to the barn to release the herd into the pasture for the first time in a week. Last Wednesday evening when the temperatures first sank below zero and the wind chills were worse we confined the animals to the barn. They are comfortable in there and don't seem to mind it too much. During the daytime, Rich opens the barn door enough for them to see outside and vent the moisture out. He puts up a gate so that they cannot get out but can see outside. When we went out this evening, this is what we saw: 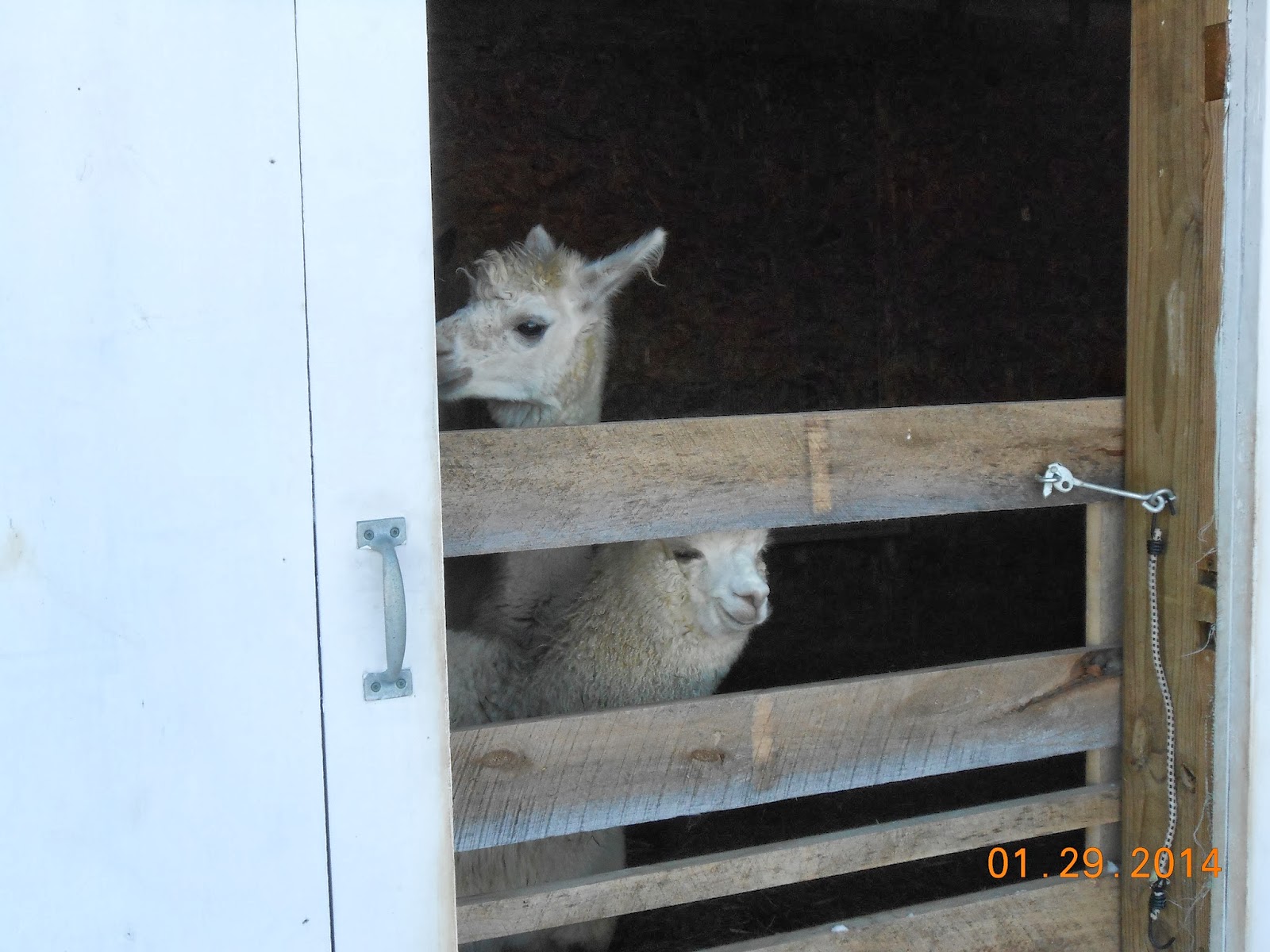 Actually, at first all five were gazing wistfully outside but Took and Asterius were the only two left by the time I had taken off my gloves, turned on the camera and snapped the picture. The others had their attention diverted by Rich who had entered the barn by the other door.

I helped Rich harness up Nikko and lead him over into his own pasture and then I set myself up with the camera just outside their door so that I could catch the picture when Rich removed the gate. This is what I captured as they rushed out into the pasture: 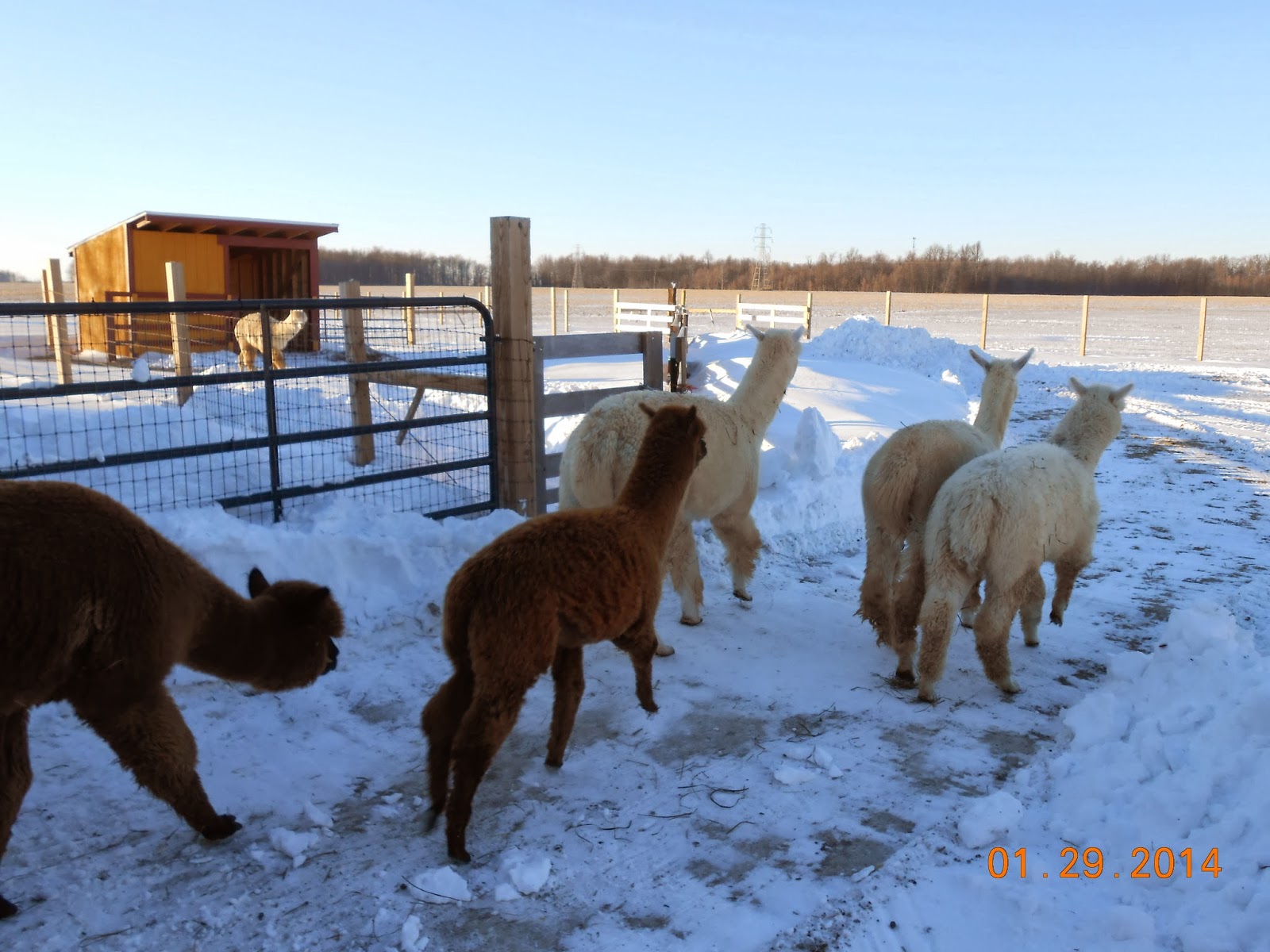 The kids had been suffering from a bout of cabin fever just like me and could hardly wait to play in the snow. Leading the pack is Took with her "baby" Asterius on her right and her grown up daughter, Mango on her left. Brutus is in the middle of the pack and Leezza is bringing up the rear. You can see Nikko in the background checking out the "condo" that he hadn't seen in the past week. What followed was a joyful sight as they rolled and romped in the snow. 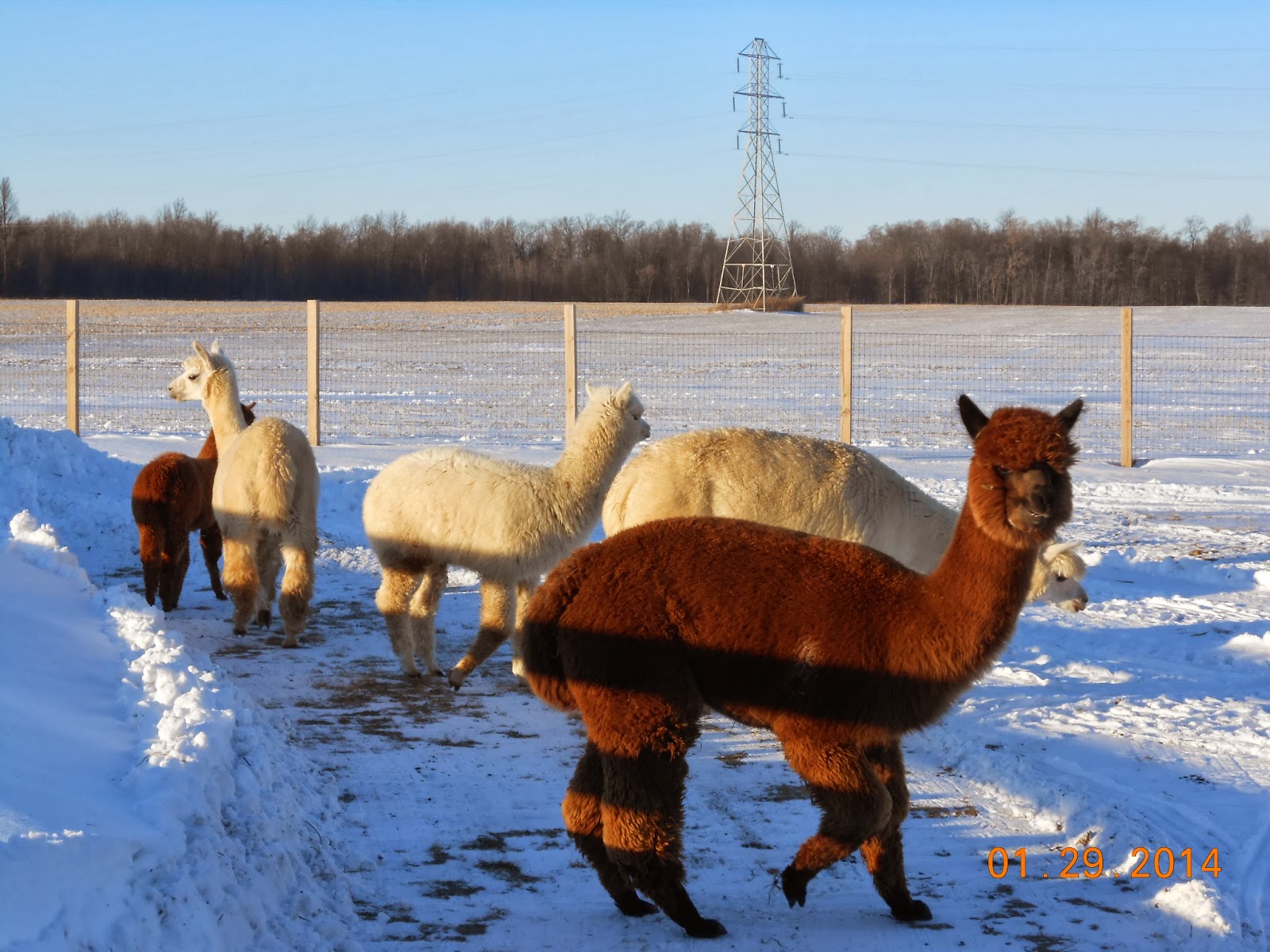 First they walked around in the area cleared out by my wonderful brother-in-law, Danny, with the tractor bucket. Just checking out the snow drifts. Then as a group they ran back into the barn when they heard Rich fill the feed bins. 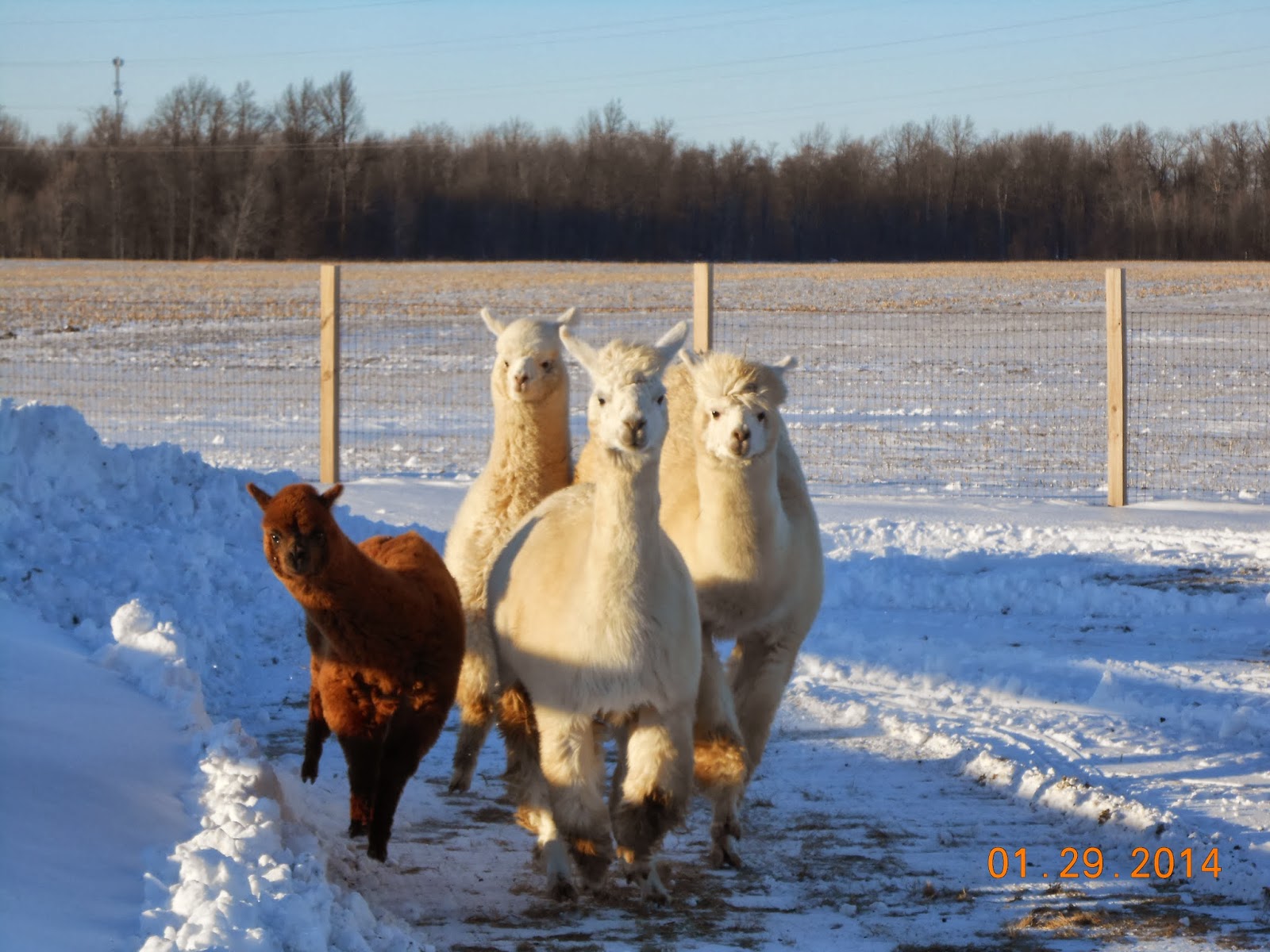 Once in the barn they all took a quick nibble of sweet feed and then one-by-one ran back out into the pasture. Brutus and Asterius were leaping and twisting and romping around so joyfully that we just had to laugh! 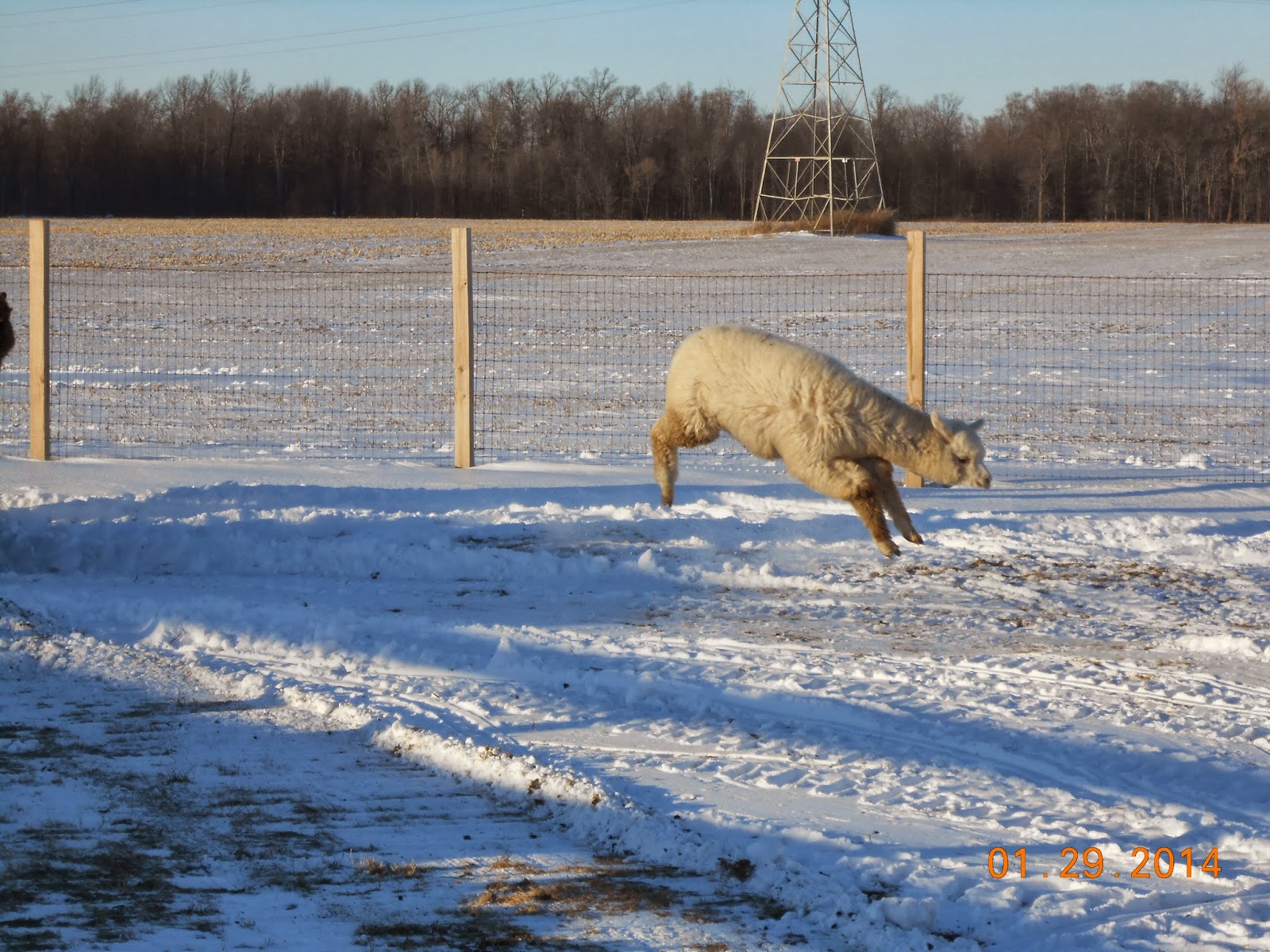 Even Mango, who is a mature, pregnant young lady now, had to gleefully kick up her heels a bit, too. 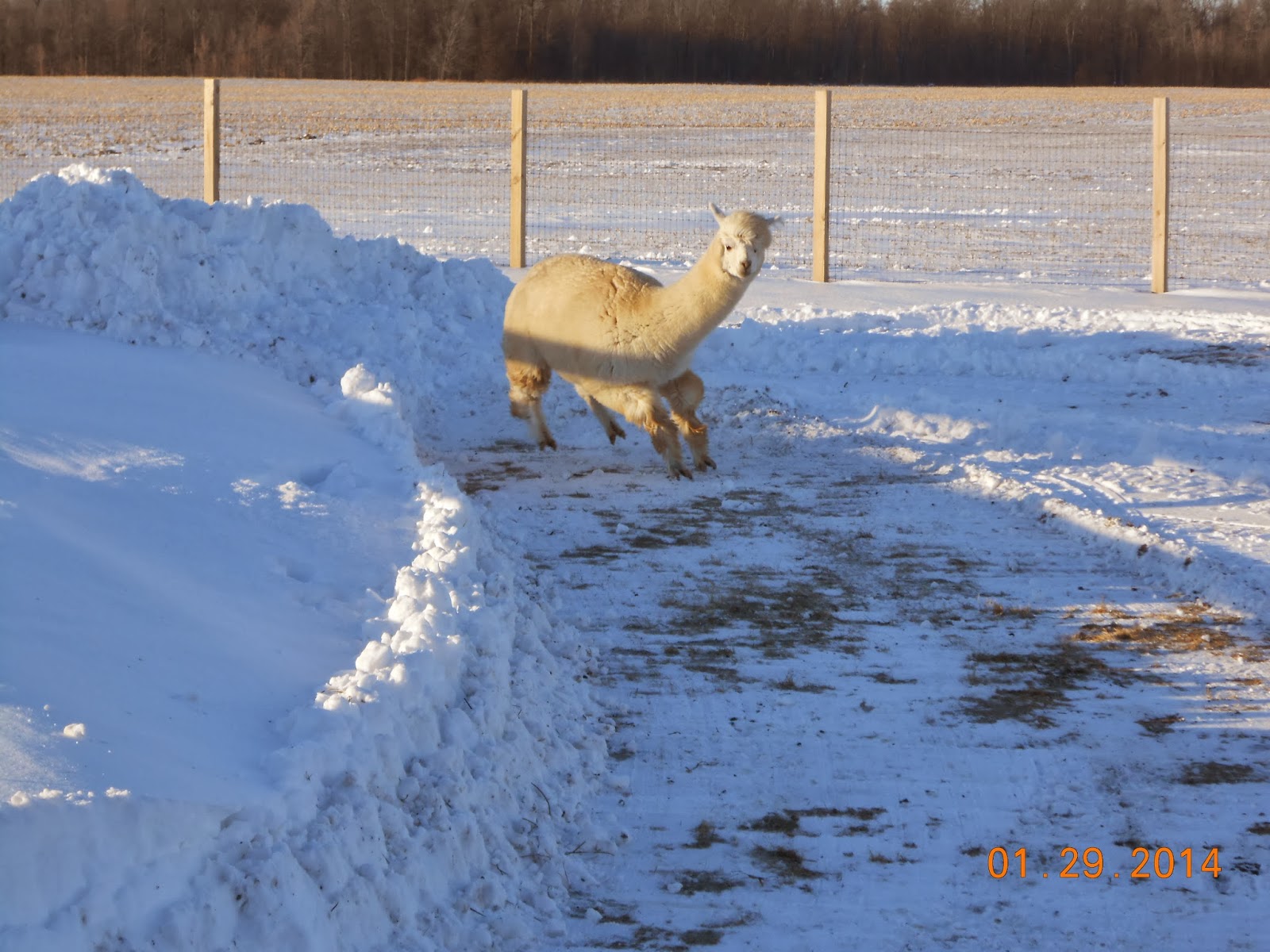 They rolled in the snow: 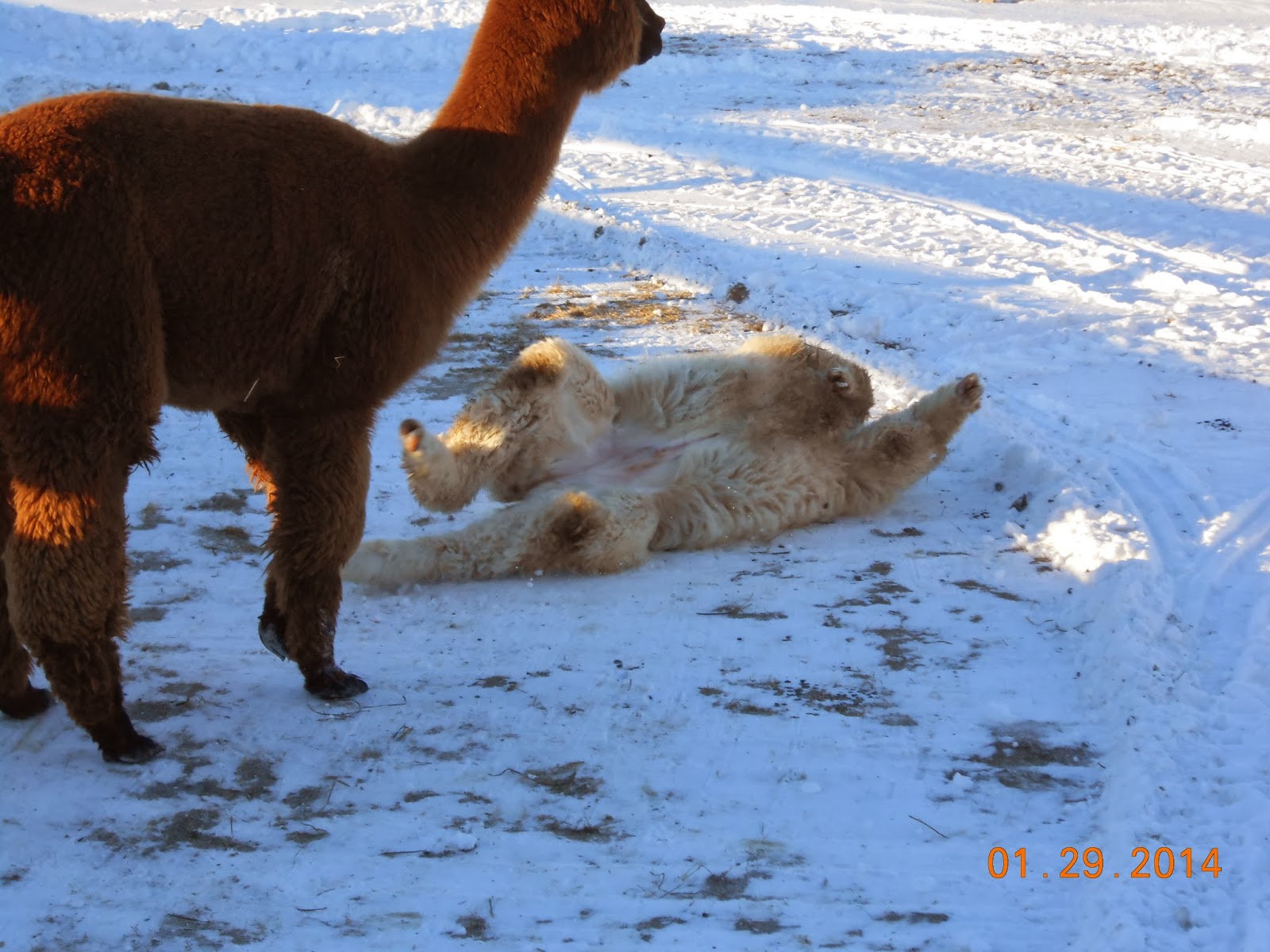 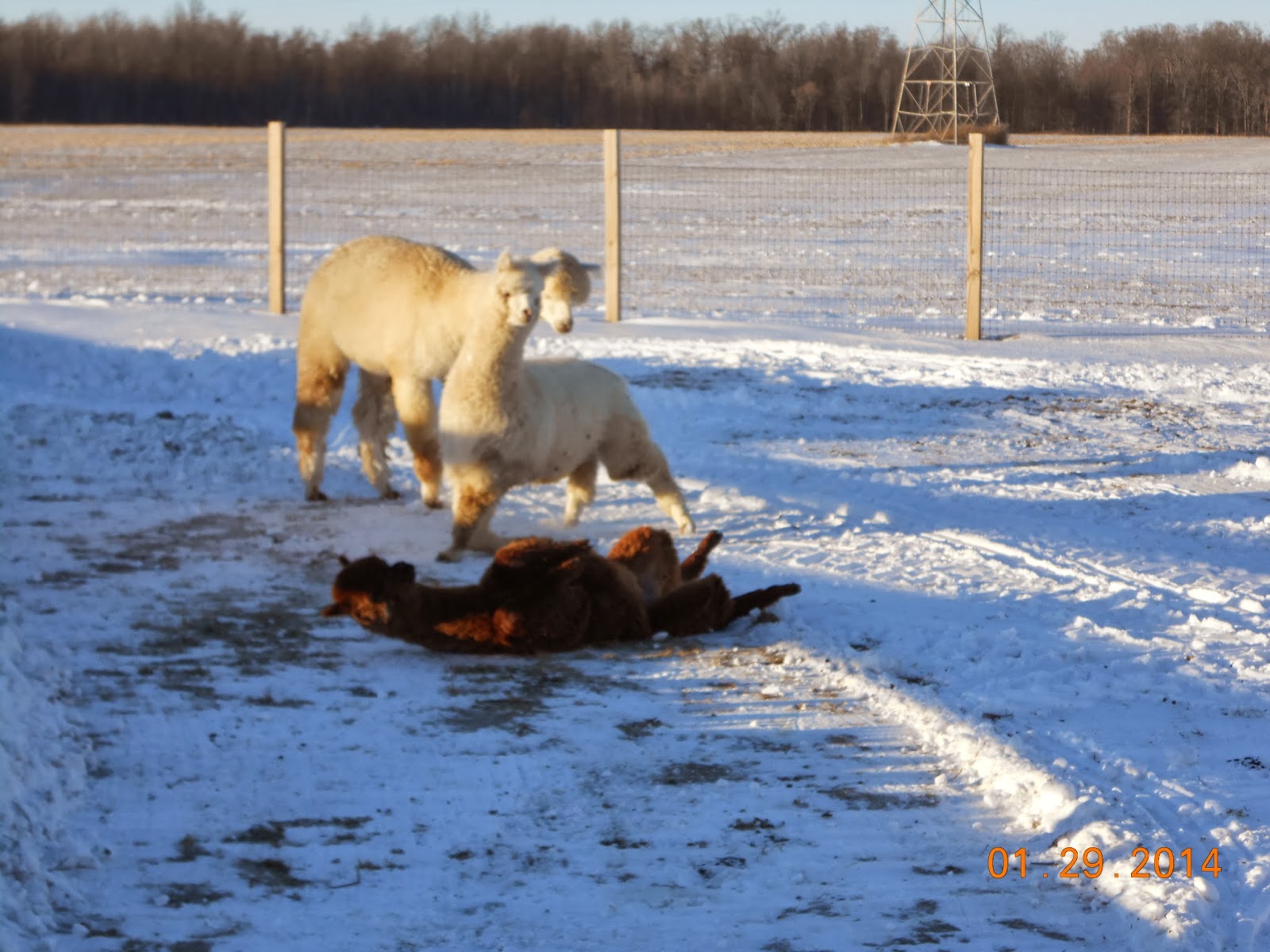 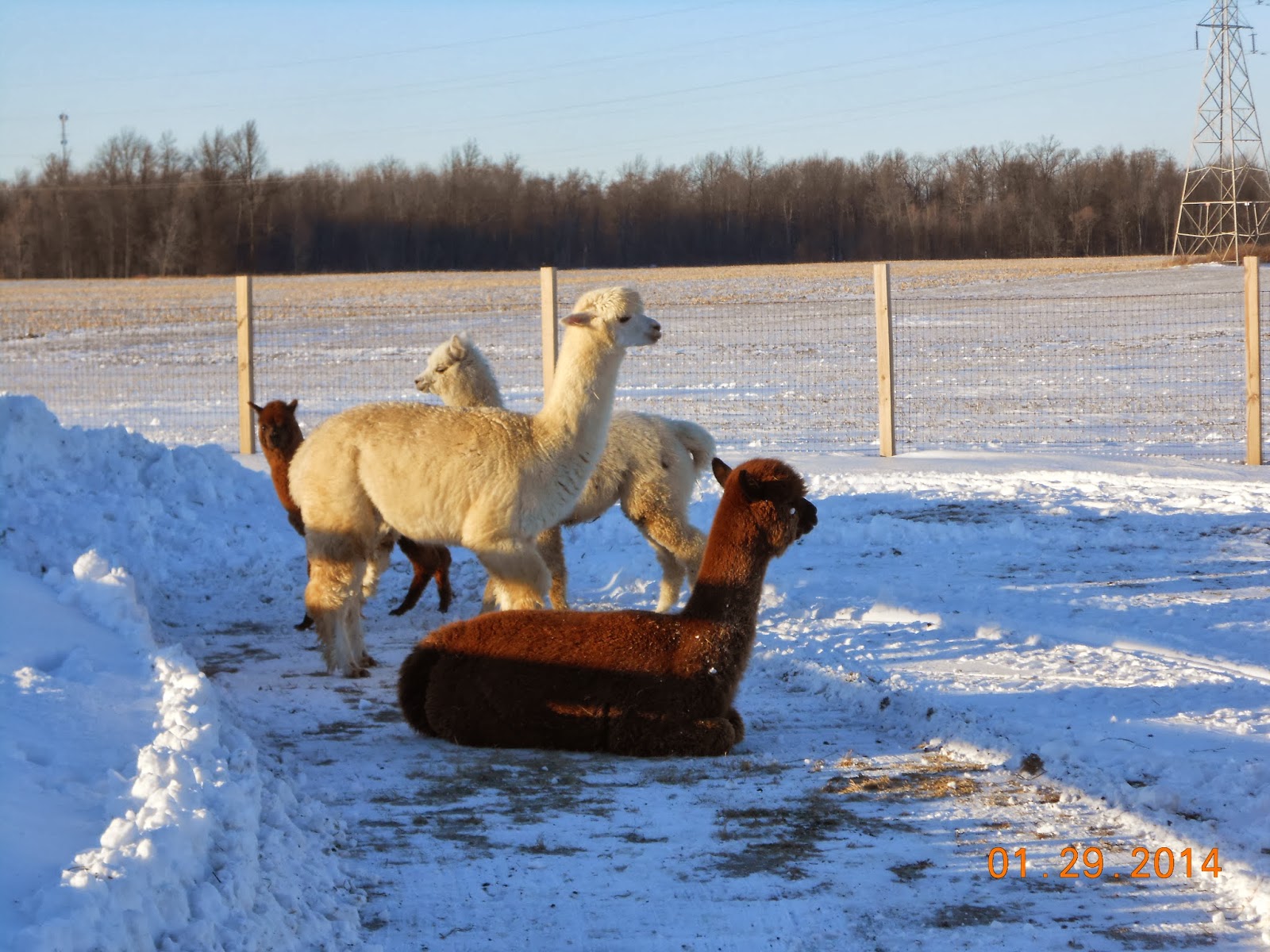 And climbed on it: 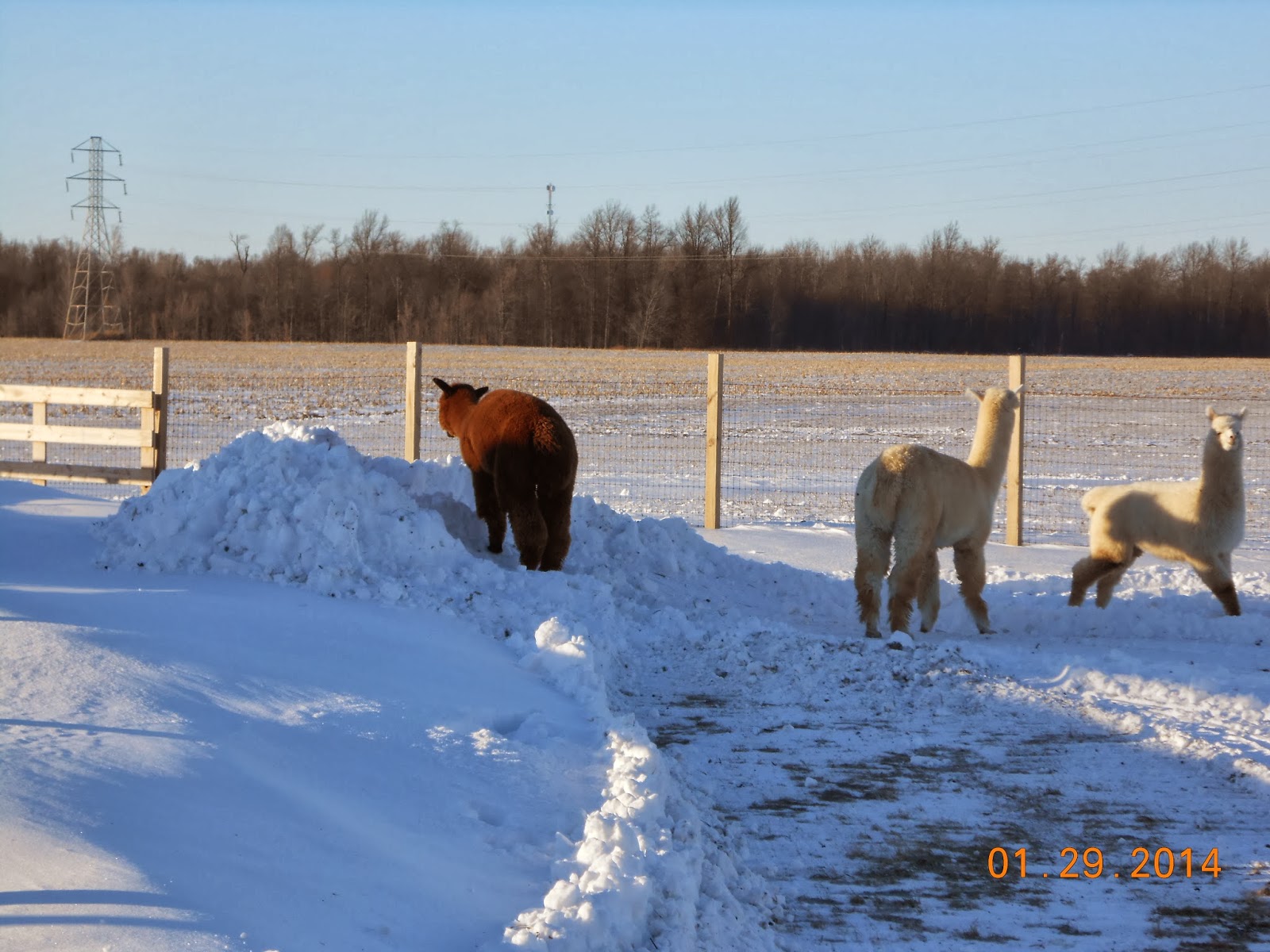 When my hands started turning blue and I could no longer feel the buttons on the camera to snap any more pictures I had to give up and go inside and leave them to their playing. After dinner, when Rich went out at sundown, they were still enjoying their freedom. I peeked out a few minutes ago and could see their shadows in the dark still moving about the pasture. These amazing animals are native to the high plains of Peru and their thick, crimpy fleece insulates them against cold winter temperatures. More than likely they will all sleep outside tonight and Rich will find them with a layer of frost on their backs in the morning. 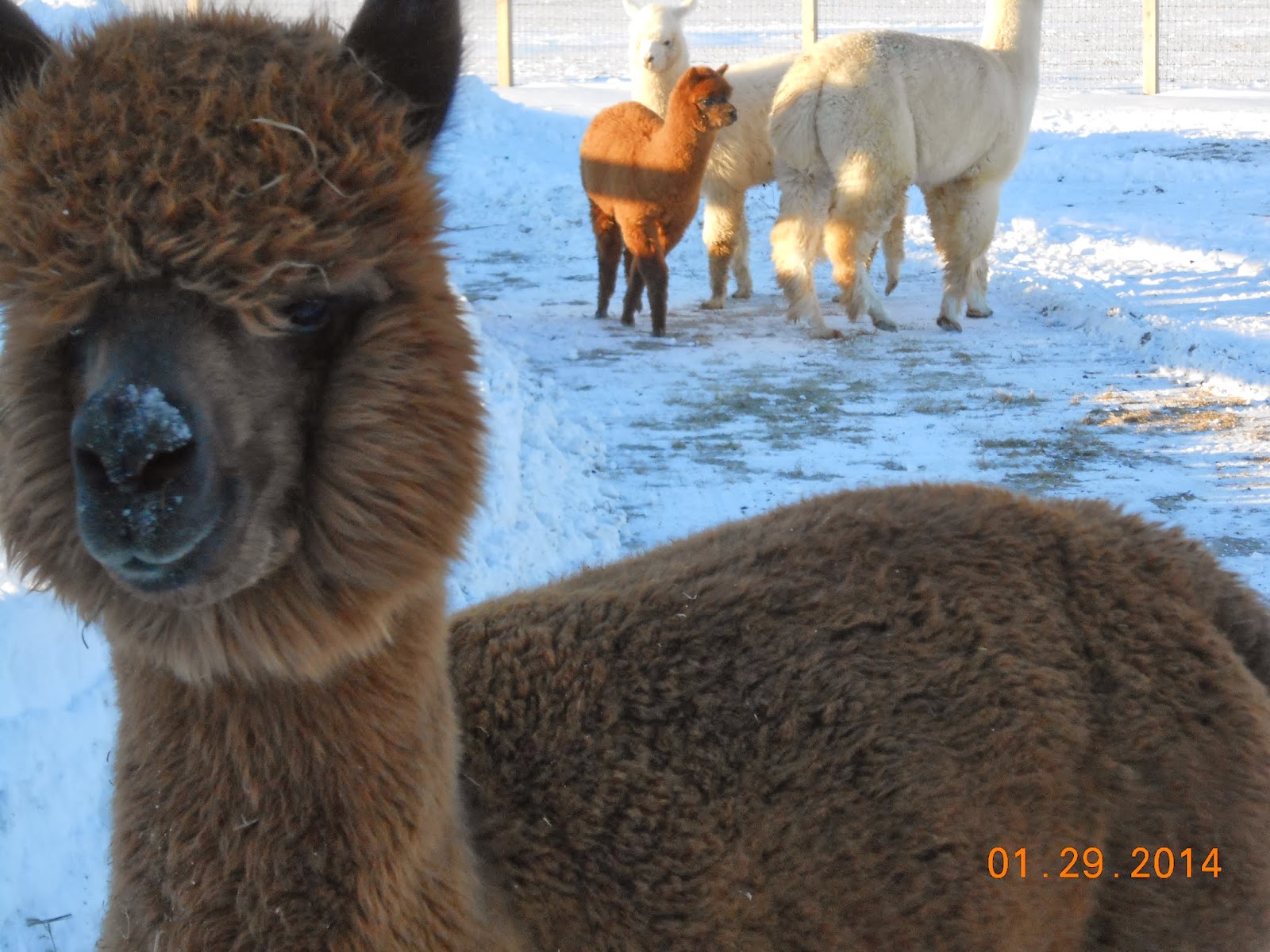