Rich became interested in the Battle of Gettysburg about twenty years ago and has been a member of the Friends of Gettysburg ever since. He makes at least one pilgrimage every year and sometimes two. To that end he made reservations at our favorite B&B, The Dobbin House-Gettystown Inn, last November for the 150th anniversary of the battle. Sunday evening we attended the commemoration program and I must say it was inspiring. As part of the large crowd we walked across the cemetery on our way to the site of the program and discovered that park rangers and volunteers had placed an American flag on each of the soldiers' graves. As we passed the Ohio section we noticed that there were also Ohio flags placed next to "Old Glory." This made us very proud to be from Ohio. 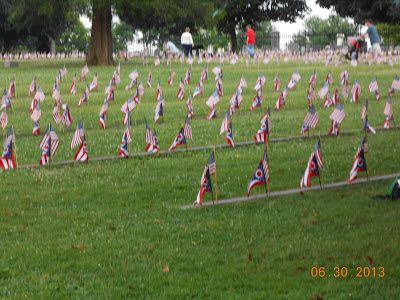 The United States Military Academy band played for the first half hour before the program. The music was a combination of songs from the North and the South mixed with a hymn or two. Their soloist, whose name I never caught, had a beautiful voice. By the time she was finished there wasn't a dry eye in our section. Country singer, Trace Adkins, sang the national anthem. One of my favorite speakers/authors, presidential historian, Doris Kearns Goodwin, gave the keynote address. The theme of the program was, A New Birth of Freedom, and she spoke about the Civil War, the Civil Rights Movement and the progress of freedom for different groups throughout our history. The most moving part of the program, however, was the "Voices of History"; a series of readings from historical letters and diaries of the period surrounding the battle. To hear the actual words of the soldiers and citizens reminds me of how the war disrupted and changed the lives of people who were living in the area.

We had been given candles on our way into the area and after the program there was a candlelit procession over to the cemetery where all of the graves had luminaries placed upon them. Rich and I were towards the head of the procession and were able to get a view of the Army's Old Guard marching in formation. As we looked back over our shoulder the view was an overwhelming sea of reverent candlelit faces.  In front of us, the cemetery was a sea of luminaries; showing the overwhelming number of soldiers were buried there.. 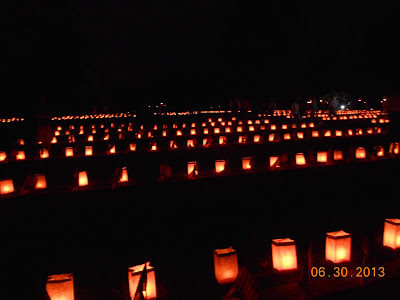 Posted by Buckeye Star Alpacas at 7:35 AM