Fourth of July Week in Review

This past week since the Fourth of July has  slipped by like summer days always do. With the traditional third of July party here at the farm and another on Saturday at my nephew's home an hour away I haven't sat down to write with any regularity. For the record, I have been imaginary blogging constantly. It just hasn't made it to the computer page.

Pressley came out last Saturday and again Tuesday afternoon to work with the girls. The weather has been either raining or so hot and humid that I drip sweat just standing still. Neither is good for working with alpacas since they are high mountain animals. They don't do rain because it soaks into their fleece and weighs them down and too much heat and humidity stresses them. I sympathize because I am not a hot weather being either. On Saturday when Pres came out we put them through a small obstacle course similar to one they will encounter in the fair competition. Both Mango and Leezza are getting better at responding to her commands. After we called it quits, I left Pressley alone with the girls to do whatever she wanted. Rachel, her mother, and I were sitting on the front porch of the weaving studio when I heard my name called from the barn. I rushed back to the barn to investigate and found Pressley inside with her arms around the necks of both animals. She had cornered and captured them alone! She obviously feels more comfortable with them and they with her. 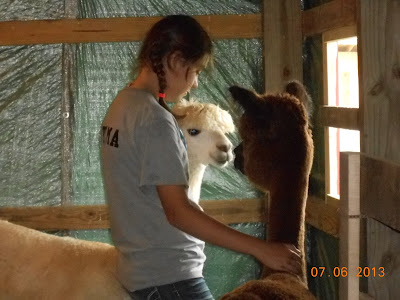 She was pretty proud of herself! 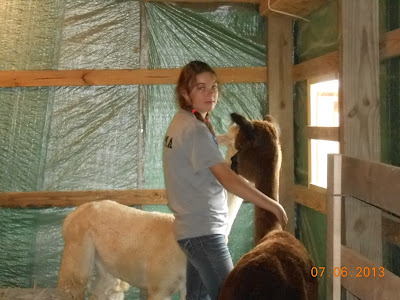 Then on Tuesday her grandma, Cheryl, brought her out to work with the girls. That was undoubtedly the most unbearably hot and humid day of the summer so we cut our workout short and Pressley collected feed data and snapped pictures of the pasture and barn for her 4-H project while Cheryl, an old friend of mine, and I sat inside the air conditioned studio for a friendly chat.

I did carve out time over the holiday to make a batch of jam. My saintly, wonderful mother-in-law, Delores gave me some cherries from the trees at her girlhood home. They were  pitted and prepped for the freezer which task alone makes her saintly, if she hadn't already successfully raised five sons! I whipped up a batch of cherry-almond-bourbon jam. That very same evening, Rich brought back some ice-cream from the  local soft-serve stand so that he could concoct sundaes. Heavenly! 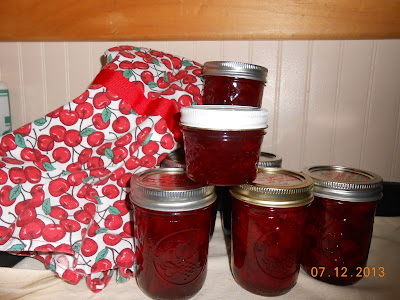 I take pictures of all of my batches of jams, not necessarily because I am overly proud of my jam making skills, but because of the beautiful, gem-like quality of a jar of fresh berry jam. Well, OK. Maybe I am proud of the jam. It is something that also makes me smile when I see it, partly because the bulk of my jam this year was created with my beautiful granddaughter. That's enough to make any grandma smile!

Two days ago, on Wednesday afternoon, a series of rather violent storms blew through  the area causing some extreme wind damage to trees and crops in the area. The storm brought with it at least 3" of rain here (according to our rain gauge) and blew off a shutter from the west side of the house. North of here, about 20 miles, where Rich works a tornado blasted the town where he works, blowing out two, forty-foot sections of the warehouse. Corn crops in the area were flattened, large trees were blown right out of the ground or snapped off, and many areas are still under water.

Yesterday, my girlfriends, the WINOS (see an earlier post for an explanation) and I made our annual pilgrimage up to Marble Head and Port Clinton on Lake Erie. We always have lunch and a great time shopping and discussing literature, among other things! We made a stop at one of my favorite yarn shops, Just For Ewe, where they have some of the most beautiful and unusual yarns. Christi Schirtzinger Soski also offers classes in spinning, dyeing, weaving, felting and knitting. You can even book an all day class with a bunch of like minded girlfriends and sleep over in one of their air-conditioned cabins.

It's been a full week and the upcoming week promises to be just at busy. A couple of my friends and I have scheduled a trip to The Blueberry Patch later in the week which means blueberry jam making next!
Posted by Buckeye Star Alpacas at 12:07 PM