Late Sunday afternoon, when my "to do" list was all caught up, I was lolling in the air chair on the back deck reflecting on the view and thinking about how lucky we are to live in such a beautiful, serene place. 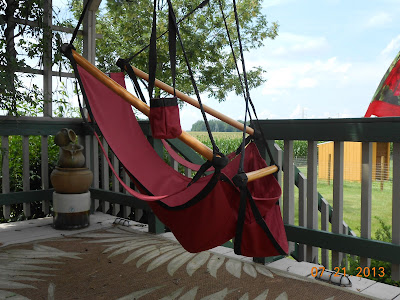 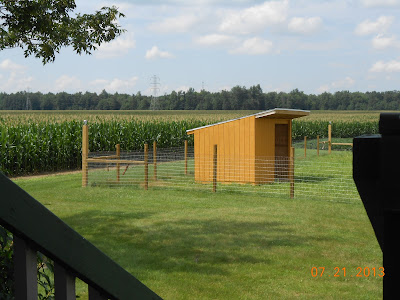 The view to the left 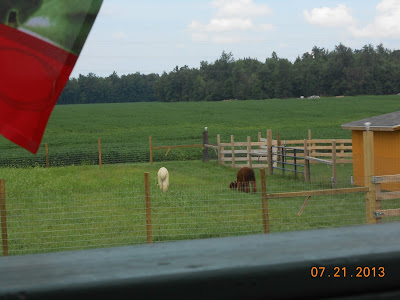 The view to the right

I wasn't even feeling guilty that Rich was still working, finishing up the "pasture duty." 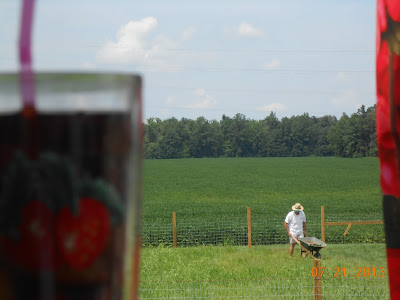 The mood changed later in the evening when we got a call from Joseph at Amy J's Homestead where our two older girls, Took and Firenze, were staying temporarily for rebreeding since the vet hadn't found anything conclusive on an earlier ultrasound. Even though the ultrasound was inconclusive Joseph and I were convinced that Took was pregnant since she was steadily gaining weight and was not interested in the males that they had put in the pen with her. Joseph told us that Firenze appeared to be in labor! She was the one we were convinced wasn't pregnant because she was so thin and hadn't gained much weight. Wow, what a surprise! I excitedly told him that I would be out to their farm early the next morning to sit and wait until the cria was born. I packed a lunch and assembled a "busy" bag, with my knitting, sunscreen, ibuprofen, eye drops (OK, maybe a bit overboard) and a book. I went to bed happily expecting to see the newest addition to our herd before the next sunset.

On Monday morning, shortly before I was ready to walk out the door, Amy herself called me with a different sort of news. She had been out to the barn several times during the night to feed a prematurely born cria and noted that our Firenze seemed to be in distress.  Amy described how although Firenze seemed to be bright eyed and alert, she was shifting from side to side and making sounds like she does when she is unhappy about the situation. She also did not rise and move away when Amy approached her and, in fact, allowed Amy to poke and prod and otherwise examine her belly which seemed greatly distended. Amy did a brief internal exam and there was nothing in the birth canal. The worse case scenario was either a tumor or a deceased fetus. Either one could have a bad outcome.

I grabbed my gear, texted Rich and headed for Amy J's. There I found Firenze laying in the middle of the barn with her hind quarters tilted sideways instead of tucked under in a proper kush. 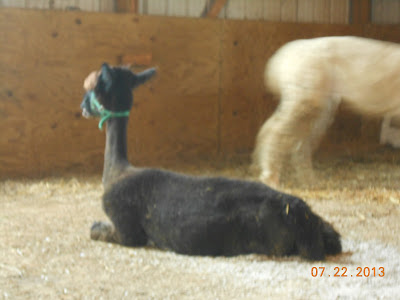 The vet had been called but wouldn't be able to get out there until after 2 p.m. So I settled into a lawn chair and pulled out my knitting to wait and watch. Firenze spent the next few hours shifting from side to side in this basic position. She was alert but still not eating and when palpated, her sides seemed ready to burst. Our Took hovered in the background occasionally sniffing Firenze's nose. It seemed as if Took was wondering why her pasture mate was acting so strange.

Also in the barn with our girls, was Amy's new mama, Ovation. Her little cria, the one born two months prematurely, was listlessly huddled in the corner. This tiny little girl weighed in at just 11 pounds when the average full-term cria should be 18-20 lbs. She looked like a long-necked chihuahua on stilts. 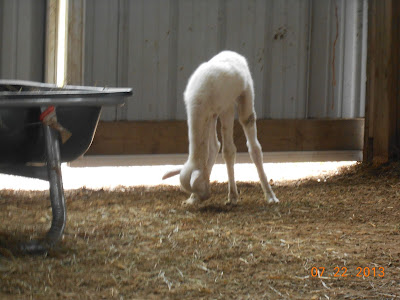 The poor little thing could barely stand up and when she did it took a herculean effort just to hold her head up. I held her, gently rubbing her throat as Amy bottle fed her. After eating, Sweetpea, as I began to call her, walked a few feet and eliminated. I followed along behind, gently rubbing her back as she attempted to navigate around the barn searching for the corner where she felt safe. After a few minutes she found the corner and collapsed. We repeated this behavior about two hours later and each time she ended up huddling in the corner even more exhausted.

Meanwhile, I waited and knitted. Amy kindly shared her lunch with me and we had a lovely conversation about education since she is a fellow educator. Then I knitted some more. I did get several inches of a   "froot loop" sock done for my granddaughter, Olivia. 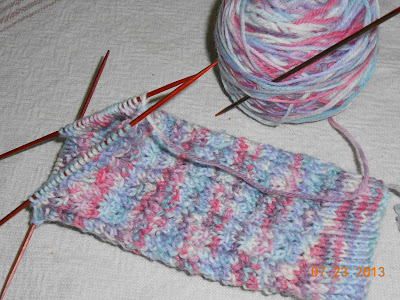 Rich arrived with an anxious look shortly before the vet arrived to find that Firenze was up, walking around and nibbling from the hay bin. She looked so much better than I found her when I got there four hours earlier. I attribute the improvement in her condition to the fact that, shortly after lunchtime, Firenze arose, went to the corner and eliminated. I won't get graphic here but what she deposited was not anything near normal and was accompanied by an extensive amount of air. When the vet arrived she was contentedly munching hay with her barn mates.

Little Sweetpea, however, was shivering in the corner even worse than before. The vet administered a shot to her neck of something that opened her airways and she did begin to breathe easier. She still didn't get up.
Her condition didn't look good when we finally left at four.

The doctor examined Firenze, took a sample of her deposits and did an ultrasound. Fortunately the internal ultrasound didn't reveal anything out of order. The doctor puzzled over her alert attitude, normal temperature and the fact that she was eating now. He decided to do a quick, external ultrasound and when he did he saw a definite, steady and strong heartbeat from a well-developed cria! Joy! Rich, Amy, Joseph, the vet and I, all practically cheered as we beamed great big smiles at each other.

Tomorrow, our girls Took and Firenze, will be coming home since the doctor deemed it safe for them to travel. Coming along with them will be Nikko, the newest addition to our little herd and in early August we will have two little ones romping in the pasture. We are thankful that the roller coaster of emotions ended so joyfully.