After the luminary at the cemetery we walked back to our B&B and popped open a bottle of the wine that we had purchased at the Adams County Winery on our way into town that afternoon. As we sat out on the front porch watching the crowd go by a young couple who were staying in the suite next to ours stopped to talk. They were into living history and were dressed for the part, and I must say made an authentically adorable couple. They graciously allowed me to snap a picture for my blog. 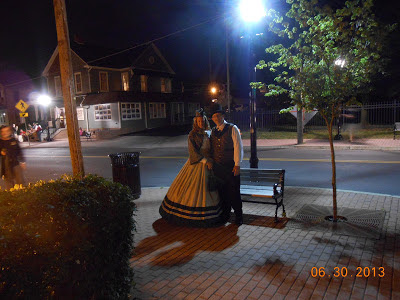 The second day of our trip to Gettysburg didn't go exactly as we had planned it. Rich and I got up early as usual. He took his morning constitutional to downtown Gettysburg to pick up coffee at the Ragged Edge. While he was gone I got myself together and when he returned with my coffee I just had to finish off my hair and we went across the parking lot of the Dobbin House to get our breakfast.

We had aimed to be done with breakfast and drive over to the visitor center by 9a.m., which we did. However, here's where the plan deviated from expected. ALL of the near parking lots were filled; the drive ways were jammed with cars trying to find parking and the attendants were directing everyone to the far lots where we would be shuttled back to the visitor center. We got out of the lot and onto the main road where we were at a standstill in traffic when we started discussing plan B. Rich and I didn't have a plan B but since we had seen the visitor's center many, many times before we both agreed that we did not want to fight the crowd. Suddenly, Rich turned down a side street and muttered," Amish country."

We headed out to the Bird-in-Hand/Lancaster County area. It was a bit of a drive but ended up well worth it. Once there, we stopped at a local meat market since the farmer's market was closed on Monday, and picked up some local cheese. It was getting closer to lunch time when Rich remembered an auction site that we had passed so he backtracked to that farm and pulled in between the buggies, trucks, cars and other vehicles.

I have no pictures since signs were clearly posted requesting that visitors not take photos. This was an authentic Amish event. It was a dinner and fund raising auction for the disabled Amish children. The fascinating part was that the chicken and rib dinners were being grilled and boxed right there under the big tent. There were also industrial sized deep fryers set up and Amish women were turning out fry pies, donuts and other sweet goodies. All around us barefoot Amish children were chattering away in their particular Pennsylvania Dutch dialect. As Rich paid for our chicken dinners I could feel curious eyes watching me. I glanced down and there behind the counter was a rosy cheeked little face steadily peering up at me with a huge smile. I couldn't help smiling back. I had to resist the urge to pick up that little blond pig-tailed doll and hug her. 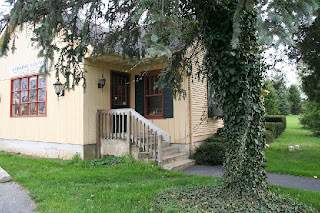 On the way back to the freeway I glimpsed a sign, Labadie Looms, and urged Rich to turn back and stop at the charming little shop. There I discovered a treasure trove of hand-dyed rovings and yarns and Donna Beaver the owner. She creates some of the most beautiful yarns from locally sourced fibers that I have ever seen. As an experienced spinner and weaver she patiently answered my questions. Although I had promised Rich that I wouldn't buy any more yarn on this trip I have a strong feeling that I will be visiting her website in the future to make a purchase after I have run my own stash down a bit.

The whole day was like an unexpected gift. On the way back to Chambersburg where we planned to spend the night before heading home we learned that the speed limits on Pennsylvania freeways must be just "suggested" speed limits. At one point Rich pulled into the left lane to allow people on the entrance ramp to merge. Traffic was so heavy that he couldn't immediately get back into the right lane and although  he was already going over the posted limit, the couple in the rather run down Jeep Cherokee behind us were rather obviously "chewing us out." When he was finally able to merge right again they sped past us and gave us what must be a "Pennsylvania welcome sign" while continuing to chatter at us. So I just smiled, waved and wished them a nice day. Fortunately our day had been so pleasant that we did not let this little incident ruin it for us. We'll be back again next year because Pennsylvanians are, for the most part, warm hearted and gracious people.
Posted by Buckeye Star Alpacas at 1:03 PM