This morning I went on a little expedition with two of my best friends, Liz and Nancy. We set out at 8:30 a.m., or what Olivia calls the "buttcrack of dawn," and headed south to The Blueberry Patch to purchase some of the most luscious blueberries you have ever seen. We had a short brunch, browsed the little shop and greenhouse,  purchased our berries and were home by noon. I know that Nancy was going to make a batch of jam and although I hadn't planned to I decided to cook up a batch, too. 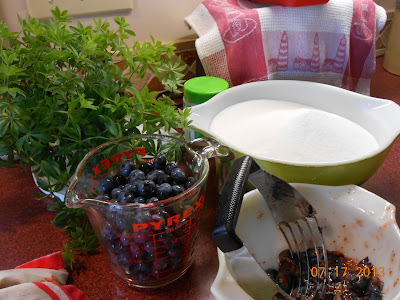 I prepared a couple of quarts for the freezer and set the rest in the fridge. I'll make another batch tomorrow afternoon after I've taken Rich's truck for an oil change and had lunch with two of my teacher friends, Debbie and the other Linda. This summer has been so busy that I haven't had a chance to "feel" retired yet.
Saturday afternoon, after he had hung the last gate in the new pasture we turned Mango and Leezza loose in the new grass. At first they were a bit hesitant to venture forth; probably because they hadn't seen grass that long since last fall when they arrived. I had read that if the grass gets too long the alpacas get a little skittish because they are afraid that something might be lurking in there to hurt them. But Mango ducked her fuzzy little head down into the grass, sniffed and came up with a mouthful of new grass and what looked to me like a big satisfied smile. Leezza poked her nose down into the pasture and promptly kushed and rolled over onto her side, waving her legs into the air. Heavenly! 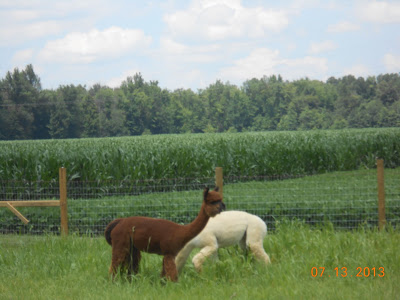 Led by Mango, they both romped around the perimeter of the new pasture a couple of times; investigated their new little "condo" and settled into the field for a little munch time before retiring for a nap. 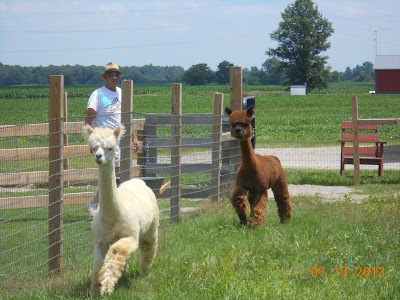 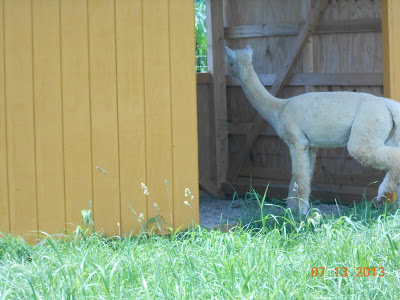 Later that afternoon three of my former students made a special trip out to our "cornfield" home for a visit. Tori, Brianna and Allie, three beautiful young women, are sisters that I have known since they were little tykes. It was a privilege for me to be their seventh grade English teacher and I am so glad that they still want to keep in touch. All three girls are not only beautiful but they are extremely intelligent and talented.
It is always fun for me to see friends interacting with our animal girls and this day was especially amusing. We harnessed up Mango and Leezza and attempted to take them for a walk in the pasture. Mango, who is usually the most eager to walk, was having none of it this day. First she kushed in the barn and refused to move. After a little prodding and rump tapping she got up and walked as far as the alley way into the pasture where she kushed again. Leezza did a little better for Brianna; but she stopped too when she saw Mango kush in the alley. So we were forced to pet and talk to the alpacas where they stood. Tori did snap some lovely pictures for me, though! 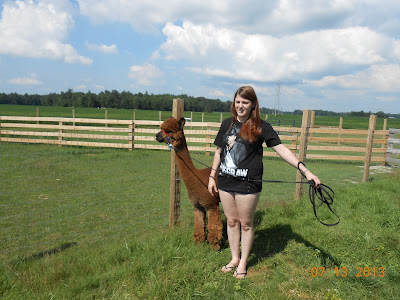 Brianna with Leezza at a standstill! 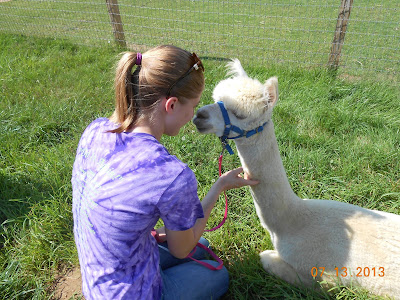