Toddlers in the Sprinkler

Today the temperature soared to over 90 degrees and I am definitely not a hot weather person. Like alpacas, I am more inclined to be active when it's a lot cooler. I do stop short of sleeping outside as the snow falls like the girls did last winter. In the warmer weather you can usually find the alpaca girls resting in front of the large barn fan which is where they could be found this afternoon. We had observed on our research expeditions last summer that while alpacas don't particularly like rain because it soaks into their fleece, they do like to have a little water sprinkled onto their legs and under belly in really hot weather.  Rich got a bright idea and dug the old circular lawn sprinkler out of the cellar, hooked it up to the hose and placed it in the pasture and turned it on low spray.

Since Took and Firenze have been visiting the boys at Amy J's Homestead , Leezza and Mango have been a bit more timid than usual. They watched him from a distance until he left the pasture and then their natural curiosity took over. They slowly wandered away from the fan in the barn doorway and crossed over into the second pasture. Circling the sprinkler, Mango leaned her nose down into the gentle spray and jerked back. She repeated this a couple of times as Leezza circled around to the other side of the sprinkler letting the spray graze her side. 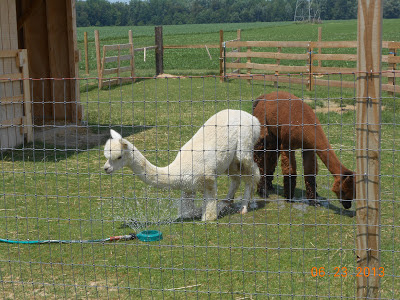 As soon as they realized that the sprinkler wasn't going to jump up and attack them they both jockeyed for position, kneeling into the spray and kushing in the small puddle. 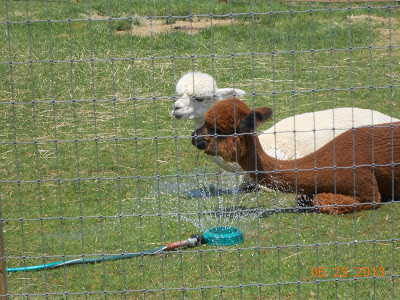 Each girl would lay in the puddle, letting the spray barely touch their face before jumping up, doing a little happy dance (that my "trigger finger" wasn't fast enough to snap) and then trading places. 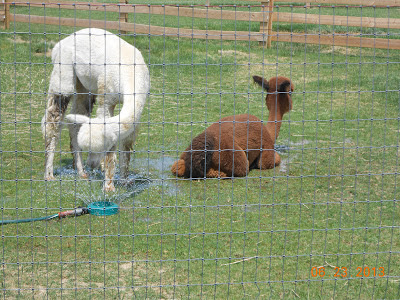 Mango and Leezza were like two toddlers, who have now grown into teenagers,  and who  used to play in the sprinkler when they visited grandma. Like those two toddlers, they were so darn cute!
Posted by Buckeye Star Alpacas at 2:54 PM