Be Happy, Be Thankful!

As if I didn't have enough to be thankful for, John Lillo, the absolute  best tech guy and long time good friend, got my blog up and running this morning after literally hours and hours of work. A personal note: I can't thank you enough, John. The next step is to get the website up and running in order to advertise animals for sale and then to set up an Etsy account to sell our yarns, rovings and fleeces.

This morning, while I was prepping the turkey and making the dressing for tomorrow (our family celebration of thanks) Rich was outside putting up Christmas decorations. Usually he does this chore on the day after Thanksgiving but due to extenuating circumstances the family dinner had to be scheduled for the day after. As usual, it is always cold and windy or rainy when he does this chore and Rich always says something like, "I'll just put up the lights on the fence," or something similar. Then once he gets started he finishes the entire task. We're working out in the little red shop after lunch today. We will be serving dinner to twenty or so relatives out there tomorrow and it needs to be rearranged a bit. Rich's grandma's old wood stove will be fired up and used to do part of the cooking for dinner and will also keep the building cozy and warm. 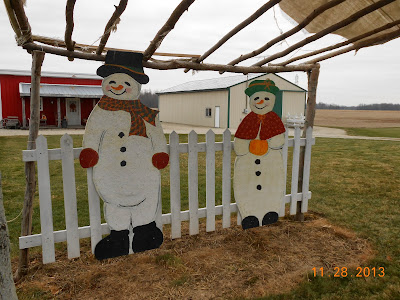 The canvas tarp roof over Mr. and Mrs. Snowman was partially ripped away in the huge storm we had a couple of weeks ago. Somehow, I don't think they will mind. They are still smiling. We made them a few years ago and they survive the winters very well. Mr. Snowman is as tall as Rich and Mrs. is about my height. That was intentional. They are lit at night. (By a spotlight and not internally from strong spirits!) 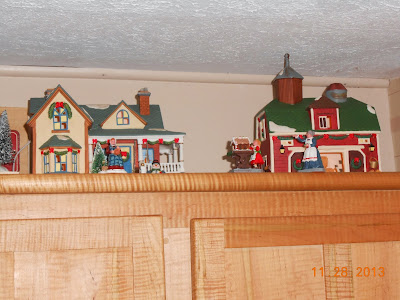 Inside, the only decorating up so far is the Winter village over the kitchen cabinets. We put those up last weekend mainly because I was doing a tornado of cleaning before the holidays. It seemed an auspicious time to take advantage of Rich's height to take down the everyday decor and put up the village. Besides, I like to look at the lighted village in the evenings while I'm knitting from my perch on the sofa. It makes me smile.

Out in the pasture the herd adjusted quickly to Leezza's return. She and Mango are buddies again. They usually pal around during the day as they are grazing and at night they sleep near each other. It has been so cold at night lately that we decided to put Firenze's coat on her. Her fleece is not as lush as it was when she was younger and we worry that she will be too cold. She looks so stylish in her red coat which contrasts nicely with her black fleece. Last year she tried to scratch it off against the fence but this year she seems to appreciate it. We also put Brutus's coat on and he seems to have no problem with it. 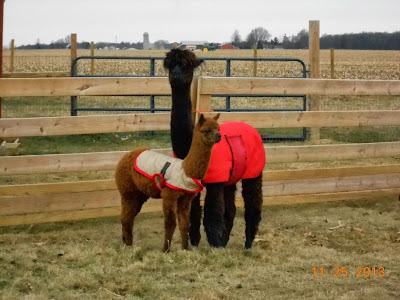 I made Brutus's coat out of one of Rich's old jackets and it's already too small for him. He shouldn't need it much longer anyway since he's growing at a more rapid pace now. I often catch sight of him with his little head dodged underneath his mama, so he's nursing frequently. He is also one of the first to the trough when Rich distributes their food in the morning and can often be found nibbling hay from the feeder. 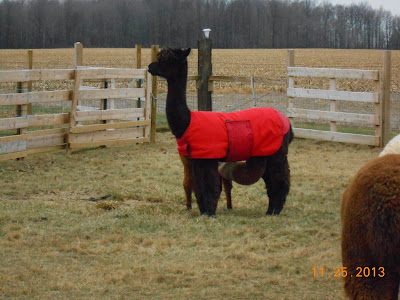 I really do have so much to be thankful for. Wonderful husband, kids and grandkids; good friends and family; surrounded by contented alpacas and a dog, all super stress relievers; a cozy little farmhouse; a full stomach and a website that works! What more could a girl want?
Posted by Buckeye Star Alpacas at 8:54 AM