Our beautiful Leezza finally came home this morning after two months at Amy J's Homestead for breeding. After several attempts to breed her with Amy's handsome male,  Salute, we are hoping that she is successfully bred. We will know for sure next October! 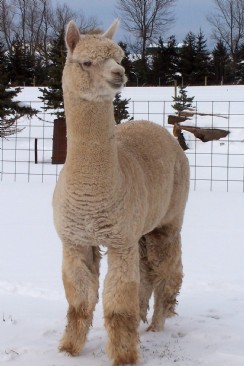 When we released Leezza into the pasture the others rushed up to greet her and sniff around a bit. It had been so long but the two little boys seemed to recognize their summertime playmate at once and wanted to romp with her. Leezza, now a mature young lady, wanted none of it and gently back kicked little Brutus in warning. Asterius, however, was more persistent in his attempts to play so he received a hearty spit from Leezza. Both backed off. 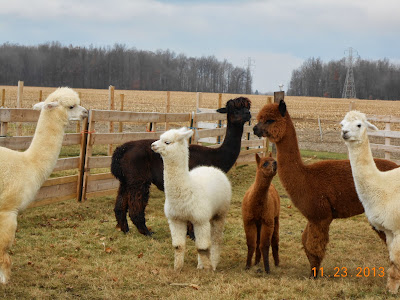 Nikko made several enthusiastic attempts to jump up on the top fence rail, seeking Leezza's attention and finally gave up when she indicated that she clearly preferred the company of her girlfriends. Took actually leaped up joyfully after sniffing her old friend and clung close to Leezza's side. Mango, on the other hand, seemed indifferent. Maybe she's still a little miffed at her old buddy for leaving her to cope with the two little males on her own. Mango doesn't really enjoy playing in the pasture with the kids like Leezza used to do.

As we left the herd to get reacquainted a light snow began swirling around in the wind that lifted the flags on the porch. Today we are flying the Ohio State block "O" alongside the red, white, and blue, as is our custom on game days. Rich and I retired into the house to watch the game against the Indiana Hoosiers and to, frankly, pig out on chips and strong drinks as we cheer on our Buckeyes. 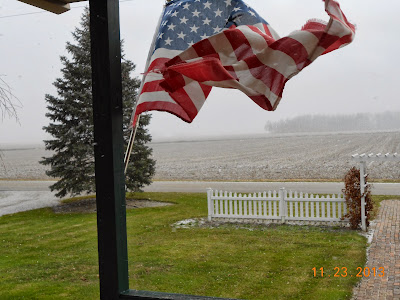 With two minutes left in the first quarter, the Buckeyes are not disappointing us. They have already racked up 14 points (to Indiana's zero). OH---IO!