Overnight the temperature dropped into the high twenties and the light rain that started at about 8 p.m. turned into snow. This morning we awoke to the first measurable snowfall of the season and two hour school delays because of the light coating of pebbly ice on the back roads. 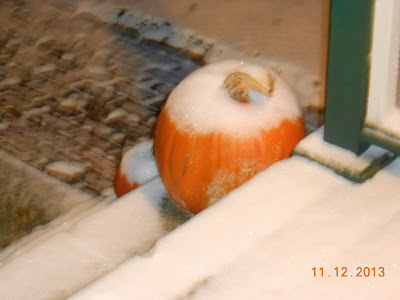 "The frost is on the punkin" to quote poet James Whitcomb Riley. I would guess we had about 1/2" more or less. I haven't heard the official stats yet. The icy stuff is gone from the road and somewhere around here someone is harvesting corn in the snow, because a tractor pulling a wagon load of corn has made a couple of passes by the house going at a pretty good clip. Earlier, I bundled up and ventured out to the barn to take a few cute pictures of alpacas in the snow. I spend almost half an hour out there and they apparently weren't in the mood to be cute. First, I had to literally chase them out of the barn where they stood looking hopefully at me, clearly wanting a sweet feed snack. 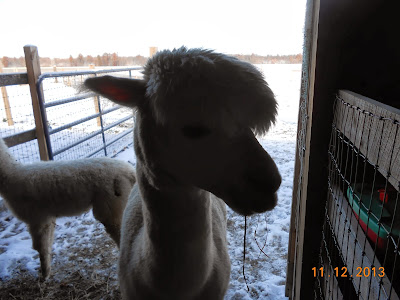 Then, once I got them out there the whole lot of them refused to leave the barnyard area. They just stood there looking at me then at Callie, my crazy dog, who was running up and down along the fence line. 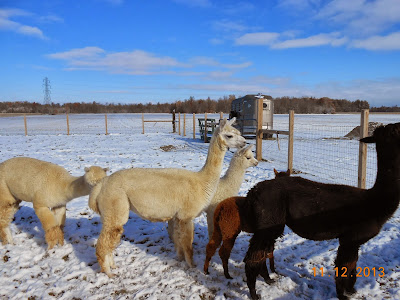 Only three-month-old Asterius, who was feeling frisky, seemed to want to play. When he jumps on the back of his sister, Mango, or our queenie, Firenze, they both kick and spit in protest and he backs off.  His mama, Took, patiently puts up with it but won't give in and play so then he attacks little Brutus who is thirty pounds lighter and a month younger. 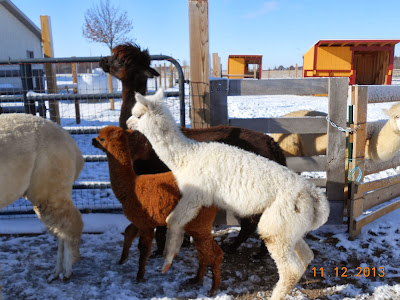 Brutus, also wants no part of Asterius's rough housing but is too small to fight back so he rushes to his mama's side and Firenze spits Asterius away from her baby. At this point, the little bully, Asterius, high tails it back to Took. He knows better than to tangle with Firenze when she's protecting Brutus! 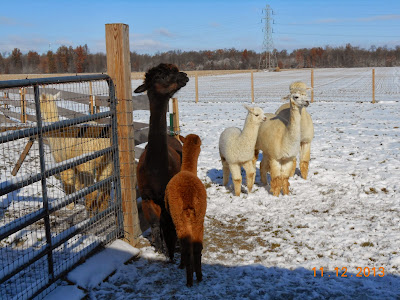 So that's it, folks. No cute pictures today. Except for Asterius, they just weren't in the mood for snow play. 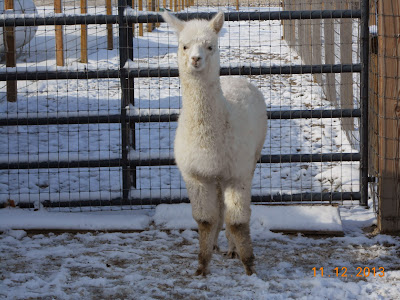