After spending the weekend down in the big city with the kids and grand kids I have come to the conclusion that no one down there reads  this blog. My own daughter didn't realize that I had been hurt by an alpaca determined to mate a few weeks ago and that I am still hobbling around on a bum knee. Occasionally Olivia sees one of my Facebook posts but that's about it. They have no idea how busy we country bumpkins can be. I think that's partly our fault since we halt normal operations when the kids come up here for a visit. Those visits are so few and far between that I don't like to be distracted with farm work or even travel for the purpose of entertainment, e.g. going out to dinner or shopping. I'd rather cook for them so that we can all sit around and just enjoy each other's company. Apparently they perceive this as idleness and boredom.

Anyway, that led me to the conclusion that I could post all of my Christmas gifts for them on my blog. They would never know what I'm getting them because they never read it! So here is the knitted throw I am making for Olivia. She knows what I am making and even what color it is because she showed me a picture of a knitted alpaca throw in a catalog about a month ago. Said throw was almost $400 and she suggested that she would like it for her newly decorated room. I even found a washable, part alpaca yarn, Martha Stewart's Alpaca Blend on the Lion Brand website that would be suitable for a teenager's room and let her pick the color. The throw is about one-half way finished and is coming out beautifully. 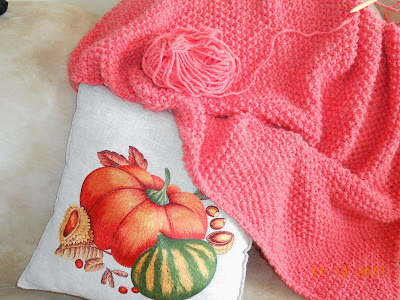 Next week is Thanksgiving and this year I volunteered to do the Kirgis family dinner. Of course,  our kids are included and that's why we're having it on Friday instead of the actual holiday. That's when they could make it. I am not as stressed out as I usually get over this. Maybe it's because I'm not teaching full time and so in the back of my mind I know that I have plenty of day time hours to prepare for the meal. In the past, if I did any early preparation it had to be in the evening after school. I am an early morning person by nature and so I am not at my best in the evening after a long day at work. I'm liking this semi-retirement thing.

I hope the holiday weekend is as beautiful and sunny as today. It's crisp outside but not windy like the past few days. Even the alpacas have spend the entire day out in the pasture grazing on the sparse grass that's left over after the freeze. I couldn't resist snapping some pictures. 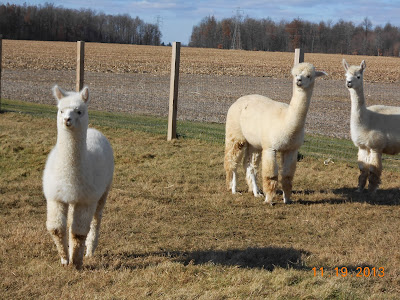 Even little Brutus seemed to be invigorated by the lovely autumn weather. He wandered away from his mama, Firenze, and made a couple attempts at playing with Asterius who is usually a little bit of a bully. 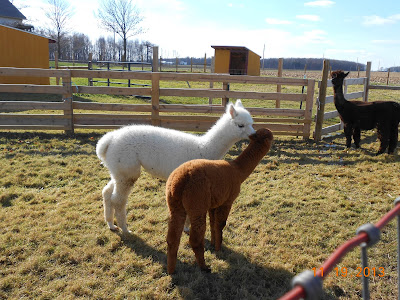 They neck wrestled for a little while and when Asterius started getting a little too rambunctious, I was pleased to see little Brutus look over his shoulder and fire off a couple of warning spits in his buddy's face. I had some concerns lately when normally feisty Brutus seemed to be timidly retreating behind his mama whenever Asterius got too rough. I'm glad to see that he is fighting back.
Taking the spit seriously, Asterius retreated and decided to check out Callie who was sitting near the fence enjoying a moment of contemplative solitude in the sunshine. I'm sure the dog was debating whether she could sneak out into the field to sniff out some wild critters.

All the while, Sir Nikko was watching this horseplay from the other side of the fence. I'm sure he would have liked to join in the fun. Nikko, I'm sure, thinks that the grass is always greener in the other pasture.