After a whirlwind of a weekend, I finally have a moment to sit down and chronicle the events. On Friday Rich and I hosted 24 family members for our Thanksgiving dinner. All of the dishes were done at the same time and our contributions as well as the dishes brought by guests were delicious. The guests's ages ranged from a few months, the newest member of the family, Kelsey; to over eighty, Rich's dad, Ed. 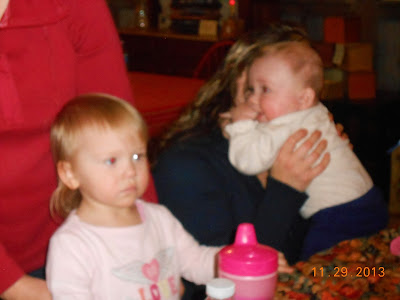 After the meal was over and everyone was relaxing and socializing, I slipped outside for a breath of fresh air and went around to the back of the barn where I found three of the kids playing King of the Hill in the gravel pile. Maddie, Mason and Shelby were taking turns climbing up the back of the gravel pile and sliding down the front...in their dress up clothing! 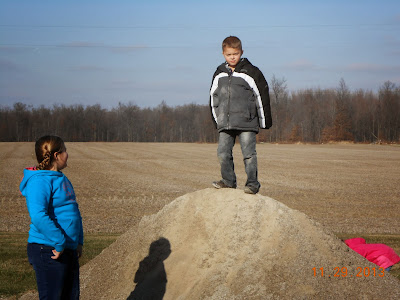 A dust cloud seemed to follow Mason in particular, much like the Pigpen character in the Charlie Brown comic strip. He was really getting into the game. And I'm pretty sure that little Shelby totally ruined a new pair of glittery red dress shoes. 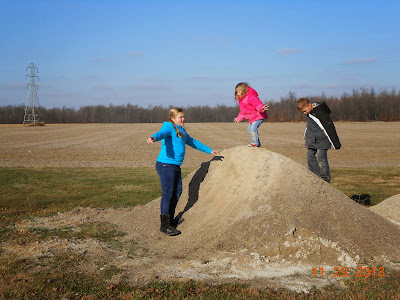 As I stood watching the kids play, laughing and squealing all the while, I turned to check out the pasture and there I saw another group of "kids" looking on curiously. The alpaca kids were staring intently at the horseplay happening on the other side of the fence as if they would like to join in. 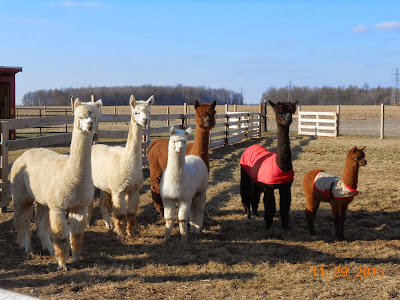 On Saturday, Rich and I went down to Columbus where I went shopping with daughter, Amy, and granddaughter, Olivia. Steve, Max and Rich watched The Ohio State Buckeyes defeat arch rival Michigan in an exciting game.

Then this morning while we were sipping our first cup of coffee, Rich surprised me when he suggested that we go out to breakfast (not the surprise, since we occasionally do that on Sunday mornings), and buy an artificial Christmas tree! That one came out of left field since we have always had a real tree and had actually planned on cutting one today. Over the past two years we had talked about caving in and getting an artificial tree during the after Christmas sales, but just never got around to it. I never actually thought we would do it since we are both traditionalists when it comes to Christmas. Neither one of us would ever go for the all blue look or a designer type tree where everything matches. We kind of like our miscellaneous collection of ornaments and would never consider a tree that was any color other than green. But this year, folks, we went artificial. We got a 7-1/2 foot spruce type tree. It may not be real but I was not willing to compromise on the height. I am my father's daughter, after all. He always picked out a tree that had to touch the ceiling and so do I.

We brought it home and immediately into the living room where we assembled it. (It takes way more than the 60 seconds to assemble than as advertised on the box!) Then we spent the next hour and a half decorating it and all the while I was having buyer's remorse and Rich was reassuring me that it was a nice full tree. I've had all afternoon and evening to get used to it and now, sitting here alone in the dark while I write, I must admit that it does look almost authentic. It is lacking the distinctive pine forest scent of the real thing but I can live with that. I'll get a scented candle or some potpourri to make up for it. I supposed I'll have to admit to Rich in the morning that I really do think it's a pretty tree. 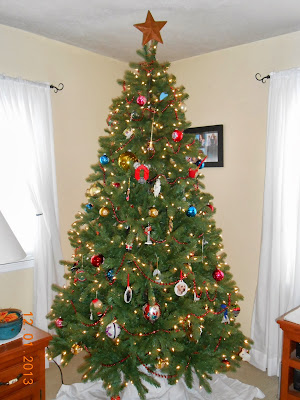