This week's story can finally be told. It's official. After this week I think that I finally qualify as a country girl. Rich has been in St. Joseph, Missouri all week for his hazardous material clean up training (there's an acronym for that but I don't know for sure what it is), and I have been on my own to take care of the animals. Usually the average high temperature in Ohio in December is 43 degrees; but, of course, this week the temperatures plummeted to January levels. One morning, when I went out to feed the herd it was 5 degrees and windy; the kind of day I prefer to stay inside sipping a second cup of coffee as I wave goodbye to Rich as he leaves for work.

On Monday morning when Rich left, we had icy roads so I was glad that he had salted the deck and walks before he left so I didn't land on my derriere when I went out to feed the alpacas at 7 a.m. I noticed at that time that little Brutus had a goopy looking eye and made a note to myself to check it again later. I stayed inside most of the day knitting away on Christmas gifts, baking cookies and grading the last set of papers that I had for my class. The day passed uneventfully.

Tuesday morning was cold but not icy. I went out to the barn at sunrise and all the animals rushed to the gate when they heard me rattling the food buckets except our queen, Firenze. She is usually the first in line for food but this morning she just lay in the doorway to the barn with her feet all on one side and not in a normal kush underneath her...a bad sign. Firenze didn't even get up when I filled the trough with food and the bin with hay. In fact, she let me walk right up and touch her when she usually jumps and runs, a sure sign that she had another tummy ache. 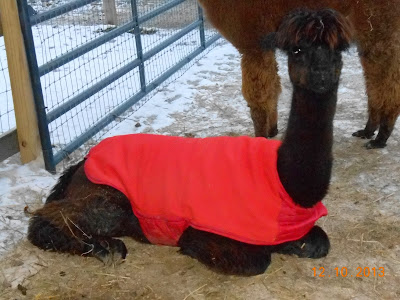 I needed to run over to the university that morning to pick up some needed forms for the final on Thursday so I planned on stopping at the vet's to ask about Brutus's still goopy eye, so I snapped a picture of Firenze and another of her poo (I'll spare you that one!) to show Dr. "Kelly" and ask her advice. While in Tiffin, I also picked up some of the probiotics that we often give Firenze to keep her tummy calm. When I saw her, Dr. "Kelly" advised the probiotics  and gave me some triple antibiotic ointment for Brutus.

Here's where the country girl conversion comes into play. As soon as I got home I suited up for the pasture, grabbed the eye medicine and probiotic syringe and headed for the barn. All of the animals were outside in the pasture enjoying the temporary episode of chilly winter sunshine. Firenze had moved to the pasture but was still laying down sideways and now she was rolling from an upright position to her side and back up again. Another sign of distress. She calmly let me approach her, grab her by the neck and open her mouth with one hand and apply the syringe full of gel with the other. No flight,no fight! At this point I wasn't hopeful that the probiotics would work their magic. 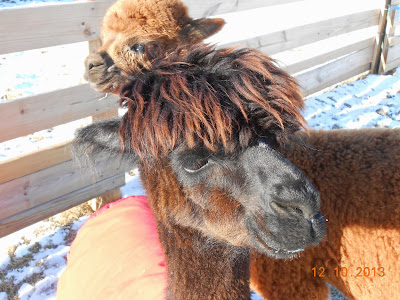 Little Brutus was hovering around his mama, never moving far from her side as I administered her meds. At one point he was pushing up against my leg as I stood there assessing the seriousness of the situation. I put my hand in my pocket, felt the little tube of eye ointment and pulled it out. Twisting off the cap rather doubtfully, I slowly leaned over and wrapped my arm around Brutus's neck and cupped his little chin firmly. Tube in the other hand, I used a finger to pull down his eyelid and administer the ointment and gently massage it into the eye. Success!

Later that evening at feeding time, Firenze was up and eagerly waiting for me at the gate in the barn. Her appetite was back and she ate the sweetfeed with gusto. Brutus was at her side noshing on the sweetfeed in the trough and I was able to grab him and administer the eye ointment again. Boy, was I proud of myself. I had taken care of both animals entirely by myself and couldn't wait to tell Rich about it when he called that night. I even rewarded myself with a glass of hard cider after dinner, finally feeling like a true country girl.

The reward was a bit premature because the next morning when I tried to repeat the eye maneuver, Brutus was on to my tricks and managed to keep at least one of the other animals between him and me at all times. I was unable to do his eye thing until Rich returned home to assist.

Today we are in the midst of a snow advisory and are expecting about 4"-6" of the white stuff. But all is well. Rich left St. Joe well ahead of the storm and arrived home yesterday afternoon. After doing some Christmas chores out in the shop this morning, we both are settled in this afternoon to watch the snow and maybe watch a Christmas movie or two.

Posted by Buckeye Star Alpacas at 9:50 AM