I have learned that when breeding alpacas there are a couple of pretty reliable ways to tell if the breeding has been successful. One of them is to wait several months and then pay a vet to do an ultrasound of the animal. This is sometimes inconclusive since the gestation period for an alpaca is 11-1/2 months, plus or minus, making the fetus very small until the end of the pregnancy. The other way is what is sometimes referred to as a behavior test or more commonly called a spit test. This is where, after a couple of weeks, you take the female back to the male to which she was bred (actually any male will do) and put her in the pen with him. If the female is pregnant, she will not kush (lie down) for the male to try again. Not only will she not cooperate but she will run away from him, kick him, spit at him and do anything possible to discourage him.

Tonight we saw that first hand when we took Mango back to visit her boyfriend, Black Night, at Grass Run Alpaca farm. If you remember from an earlier post, we had taken her there on October 7th for their first "date." That was a Learning Experience for both of us. This evening, after supper, we loaded Mango in the trailer and set off. When we arrived at Grass Run a glance out of the car window showed that Black Night remembered Mango and was anxious to see her again. 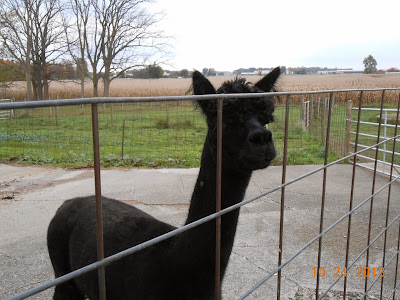 Rich unloaded Mango from the trailer and Myron opened the gate to Black Night's pasture. That's the point at which all heck broke loose. As Black Night ran out of the gate to meet with Mango my heart leaped into my throat and visions of chasing alpacas out onto Route 19 flashed through my mind. Myron was calmly standing by the gate, probably because he knew from experience that his animal would follow Mango, who was on a lead, anywhere! And he did. As soon as the animals were in the barnyard and the gate was shut, Black Night began orgling and attempting to jump upon Mango. Rich could hardly contain Mango long enough to remove the lead when she tore off circling around the barnyard with Black Night in hot pursuit. Myron had rushed to the far corner of the yard to open the pasture gate. Rich had stepped back into a corner and I was up against the fence as the two animals completed their first lap and were headed straight for me, with Mango in the lead. She saw me and veered away from me at the last minute and avoided hitting me. Black Night, intent on the business at hand, was blind to my presence. He grazed my side as he pursued Mango, knocking me to my knees in my awkward attempt to back into the fence for support. I picked myself up and assessed my injuries. My jeans weren't torn and nothing seemed broken. The only thing that seemed to suffer any damage was my dignity.

Mango headed for the open gate into the pasture with Black Night following, orgling all the way, determined to mate with her again. She is one fast young lady! When he caught up with her she kicked and ran some more. As she ran, she turned her head back over her shoulder spitting furiously at the poor guy. All the while the Grass Run females peered through the fence from the adjoining pasture, enjoying the show and cheering her on. 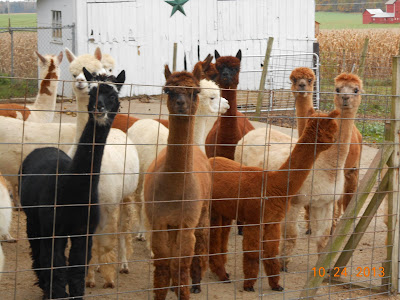 Rich and Myron worked together to herd the two young animals back into the barnyard and then into the barn so that they could be separated and the lead snapped back onto Mango's halter. With Myron restraining Black Night, Rich pulled Mango  quickly out of the barn and I slammed the gate shut. We loaded our girl back into the trailer; exchanged a few pleasant words about the weather and the corn harvest, thanked Myron, and were on our way.

Back home I helped Rich unload Mango and release her back into the winter pasture with her friends. While he unhooked the trailer and put it away for the winter, I went inside, changed into my jammies, took two Advil and made a cup of tea. I am pretty sure that I will be sore in the morning but for tonight it's just a relief to know that we can expect a new cria from Mango next fall.
Posted by Buckeye Star Alpacas at 4:30 PM