When we set out on this crazy journey a year ago I expected it to be a learning experience and I haven't been disappointed one bit. Rich and I have developed so much confidence as we mastered each new task. Some of you readers have been with us from the beginning so you know about our early, rather humorous and failed attempt at rounding up alpacas and herding them into the barn. Since then we have both become pretty proficient at rounding up the animals together and alone. We feel confident loading them up into the trailer and hauling them anywhere we need to go and then unloading on the other end. I feel comfortable giving shots and Rich is able to snip the toenails of even the most reluctant animal. We've assisted at shearing time and I attended three days of intense training in how to sort and classify fleeces. More recently, we have given postnatal care to two of the most adorable crias; one of which I mis-identified as a female at birth. A month later Rich made the correction when he noticed a new development under the little lad's tail.

Last night, though, both Rich and I took part in lesson that left us both with so many conflicting feelings that it is difficult to describe the experience. After consultation with the vet who cleared Mango for breeding, Rich and I made the decision to visit Grass Run Alpacas just south of here and pick out a new boyfriend for her. We had been there to visit a year ago and remembered a handsome young black stud that we felt would make a perfect mate. Last week the arrangements were made to bring her down there for a "drive by" breeding. If it didn't take the first time, no problem, because Grass Run is so close that it wouldn't be difficult to return for another try. So after supper last evening we loaded her up and set off for Mango's date. 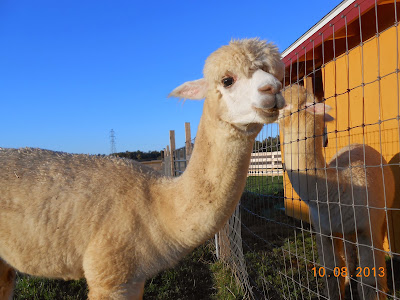 Mango's new boyfriend is a handsome, true black stud named Black Night. He curiously peered over the fence as we pulled into the driveway and when Rich backed the trailer up to the gate, Black Night started pacing back and forth along the fence. Myron and Rhonda, owners of Grass Run, came out to meet us and lend a hand as we unloaded Mango and walked her into the barnyard where Black Night waited. The minute we unsnapped the lead and backed away, Black Night went to work. He was ready. Really ready.

Mango, on the other hand, was more curious than ready, so rather than kush down immediately like a more experienced female would have done, she walked over to the fence separating Black Night's yard from that of the females. Unfortunately for the poor stud, Mango was curious and wanted to socialize. She walked around sniffing the other females and all the while Black Night was hopping along behind her  on his back legs, hanging on for dear life, and making the mating sound known as "orgling."  The two of them continued in this manner, making a lap of the pasture until they got back to the gate area where the three humans waited. Myron stepped in front of Mango and held her, pushing her down into a kush. Then Myron had to assist on her other end, holding her tail out of the way to allow Black Night full access as Rich and I looked on helplessly and more than a little uncomfortably. All the while, Black Night orgled, orgled and orgled! There is no way to describe the noise he made. Orgle says it all. Onomatopoeia: a word that sounds like the sound it is describing. Orgle.

This went on for almost half an hour. Before it was all over, I think Rich was feeling sorry for the young stud and I felt bad for Mango as she looked up with her big, dark eyes, as if to say, "Please, take me home." We won't know for about two weeks if the episode produced the results we want, a pregnancy for Mango. Either way, this was a decidedly out of the ordinary learning experience for Mango, Rich and myself!
Posted by Buckeye Star Alpacas at 4:53 PM