All week the forecasters had predicting drenching rains for all day Sunday, (today), when Rich and I were planning on taking mama Took and her son Asterius to the Oktoberfest at nearby Garlo Nature Preserve. I did a spinning demonstration there last year on the front porch of the first log cabin that was reconstructed there. I had so much fun that I volunteered again this year and even joined the Friends of Seneca County Parks. Taking the alpacas along seemed like a great idea to go along with the whole spinning, knitting, weaving thing. Rich even made a special, portable, deluxe pen for the animals. We were both excited to share our animals with everyone. 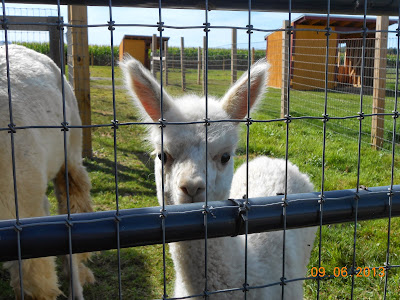 Then the rain was predicted. Not just rain but thunderstorms, too. All day. One of the first things we learned about alpaca fleece is that it doesn't contain the lanolin that sheep fleece has and tends to absorb water. The general practice is to only provide low sprinklers during the hottest weather. Only their legs and undercarriage should get wet. If the blanket (back) fleece were to get soaked it not only weighs them down, on a warm day such as this it acts as a sauna and could cause heat stroke. So we decided against taking them.

Bridget, my wheel, and I went and I did the spinning demo. We spun and spun from 10:30 a.m. to 4:30 p.m. I had a great time just like last year. I met some interesting knitters and some people interested in possibly owning alpacas. But the little kids were so much fun. So many of them were really fascinated by the spinning and asked many questions about the process. They liked to feel the raw fleece, the roving and the finished yarn. One little boy even asked if he could take my wheel home with him! He is clearly a future spinner. 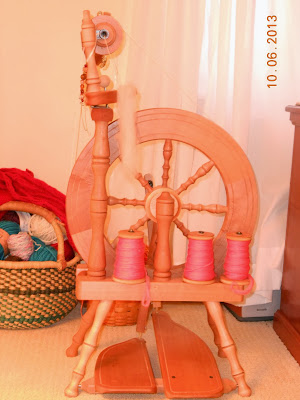 We trusted the weather forecasters. All three of the Toledo stations said the same thing. You know how that goes. It rained all right. About an hour after the whole event was over!