We separated mama Took and her baby, Mango, six days ago and fully expected to hear screeching on Took's part and wailing from Mango because she couldn't nurse occasionally. Took was isolated on the shed side with Firenze;  and Mango and Leezza were on the barn side to provide a little more room for running and pronking. Now that the weather is getting nicer the young ones romp in the pasture every evening. Rich and I have been visiting the pasture frequently and observing from the windows and the girls have adjusted remarkably well. Took even seemed relieved not to have to look after Mango any more. Most of the time when Mango is standing by the fence gazing at her mama, Took is laying serenely in the shed or pasture chewing contentedly. Mango hasn't been pacing along the fence or showing any obsessive behavior that might be associated with stress from forced weaning. I think we got lucky and the separation was timed perfectly. 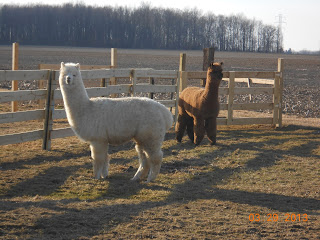 Checking out mama across the fence. 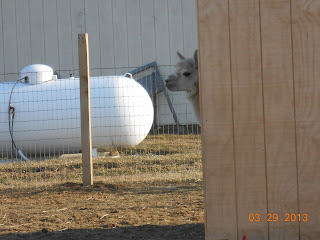 Took in her new condo!

This afternoon my "saintly" brother-in-law, Danny, came over to lend a hand in our first attempt at loading the girls into the trailer in preparation for shearing time. We plan on taking them over to
Amy J's Homestead Alpacas where we purchased them to be shorn along with their herd on April 22. Rich wanted to be sure that we could load them into the trailer. The plan was to halter them all first and put them on leads and Danny and I would hold them while Rich would backed up the truck to the gate and opened it into the pasture. It went like clockwork. Rich loaded "Queen" Firenze into the trailer first; our reasoning being that since she is the leader the others would willingly follow. They did follow but with some coaxing. Took was next and seemed reluctant to enter. I hopped up into the trailer and gave a tug and she followed. Danny brought Leezza along and she leaped up - no problem! Mango was a bit more reluctant so I gave Rich the lead and got out and gave her a pat on the rump and she jumped in.

We returned Firenze and Took to their side of the pasture and both settled down to nibbling the stubby grass. Rich and Danny took Leezza and Mango on a "show ring lap" around the yard and outbuildings for practice just like we saw at the alpaca show in Columbus a few weeks ago. Then when they were returned to their pasture they romped around enjoying their freedom. (Of course, I didn't have the camera!)

The whole practice exercise was a terrific confidence builder for all three humans involved!
Posted by Buckeye Star Alpacas at 11:56 AM