After his trip to Amy J's Homestead for training the other day, Rich decided that today was going to be our herd health day. He had herded the girls into the barn before Pressley arrived and we were ready for toenail trimming and Mango's CDT booster shot. Easier said than done. The three of us held Firenze first and while she didn't exactly like having Pressley hold her while Rich lifted a foot to check and clip overgrown toenails, she didn't fight us. The job was relatively easy. 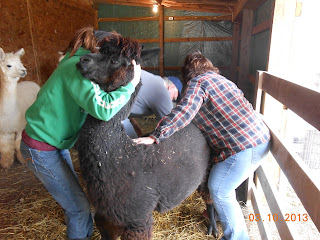 Leezza was the next one to be caught and she was really calm while her nails were checked and trimmed. Rich held Leezza while Pressley lifted each foot and I trimmed. 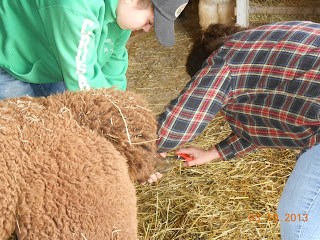 Took was next on the list. Catching her was relatively easy but lifting those feet was another story. She has had this proceedure done many time before, but for some reason she wanted no part of it this time. We managed to get her fore feet trimmed but she kept kushing every time we tried to lift a rear foot. Ever had a pregnant 175 lb. alpaca sit down on your foot and refuse to budge? That's what she insisted on doing and we had to give up on her back feet. Rich and I will try again later this week when she forgets this experience. 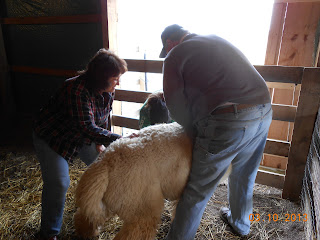 Mango wanted no part of the nail clipping and really fought us, leaping and dodging around, even as Rich held her head and neck. We gave up since we had the shot to administer  and deemed that a more important procedure. We harnessed up she and Leezza and took them for a walk around the pasture and outside and around the woodshop. Both young girls were led easily around the yard and back into the pasture where Mango got her shot. Rich held her, Pressley separated the fleece and I injected the medication. 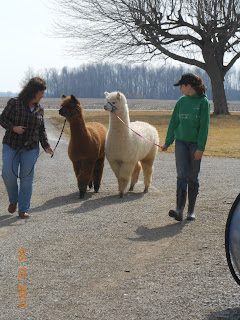 After this traumatic session, Pressley got a sweet little snuggle from Mango before Rich tried again to cut her nails. At that point she was through and took off with the lead still hooked up. We captured her, removed the lead and let her go. She was mouth breathing at this point and too stressed for any more training. We left them alone. Later in the evening Rich went out to check the girls and every one of them came rushing in for the sweet feed treat that he offered. Trauma forgotten.﻿ 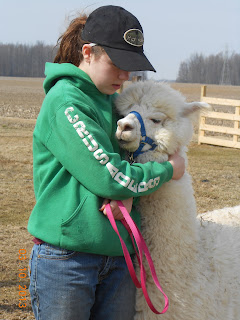