"April is the cruellest month..."

Although Eliot goes on to tell a different story after the first four lines of his poem, "The Waste Land," these four opening lines always make me feel like it's a description of Ohio in April. Today the temperatures reached a comfortable and sunny 68 degrees and tomorrow is supposed to be the same. However, (in Ohio in April there is always a "however") by this Easter weekend the temperatures will struggle to reach the low 40s.

Ah, well! All we can do is enjoy the warm day while it's here. I spent the morning painting  the rest of the kitchen wainscoting that I hadn't finished the other day. I must admit it looks so much cleaner in there. 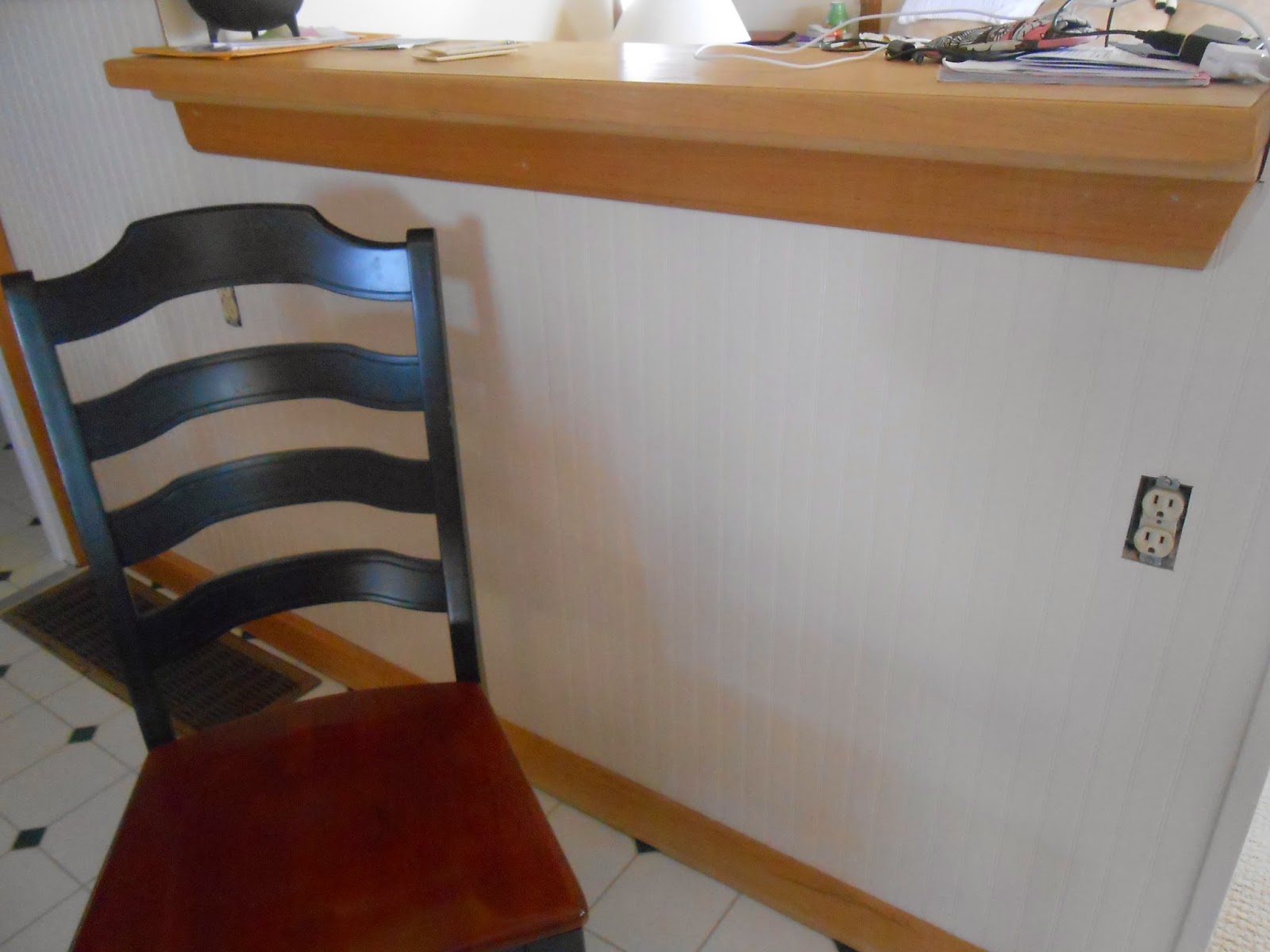 Now, though, the front door looks pretty shabby and will need painting when it gets warm enough to keep it open all day. I may as well get enough paint to do the back door, too, since once the front door is done it will make the back door look pretty tired. That's the trouble with interior painting projects. Once you complete one room, it makes the ones near to it look badly in need of refreshing. It's the old "domino theory' at work.

I'm taking a break for the rest of the week to get some craft projects done. I have a sewing project about finished and it has been laying around for over a week now. One good hour's work and my new blouse should be ready for Easter Sunday. I have one sock done of a pair that I am making for a friend of my granddaughter, Olivia. The second sock is started (2") and I need to get to work on that. I also have some yarn half plied on the wheel that I have been staring at since October. 'Bout time I get that done, too. Once those projects are completed I'll get back to the painting.

The forsythia by the back deck hasn't bloomed yet and according to the folklore that my maternal grandpa swore by, there will be three snows after it does. I cut some twigs from the shrub and brought them inside yesterday, hoping to force them to bloom and hasten things along. Right now they just look like sticks in a jar! No sign of a blossom on any of the sticks, so I guess that means that we still have more snow to look forward to. 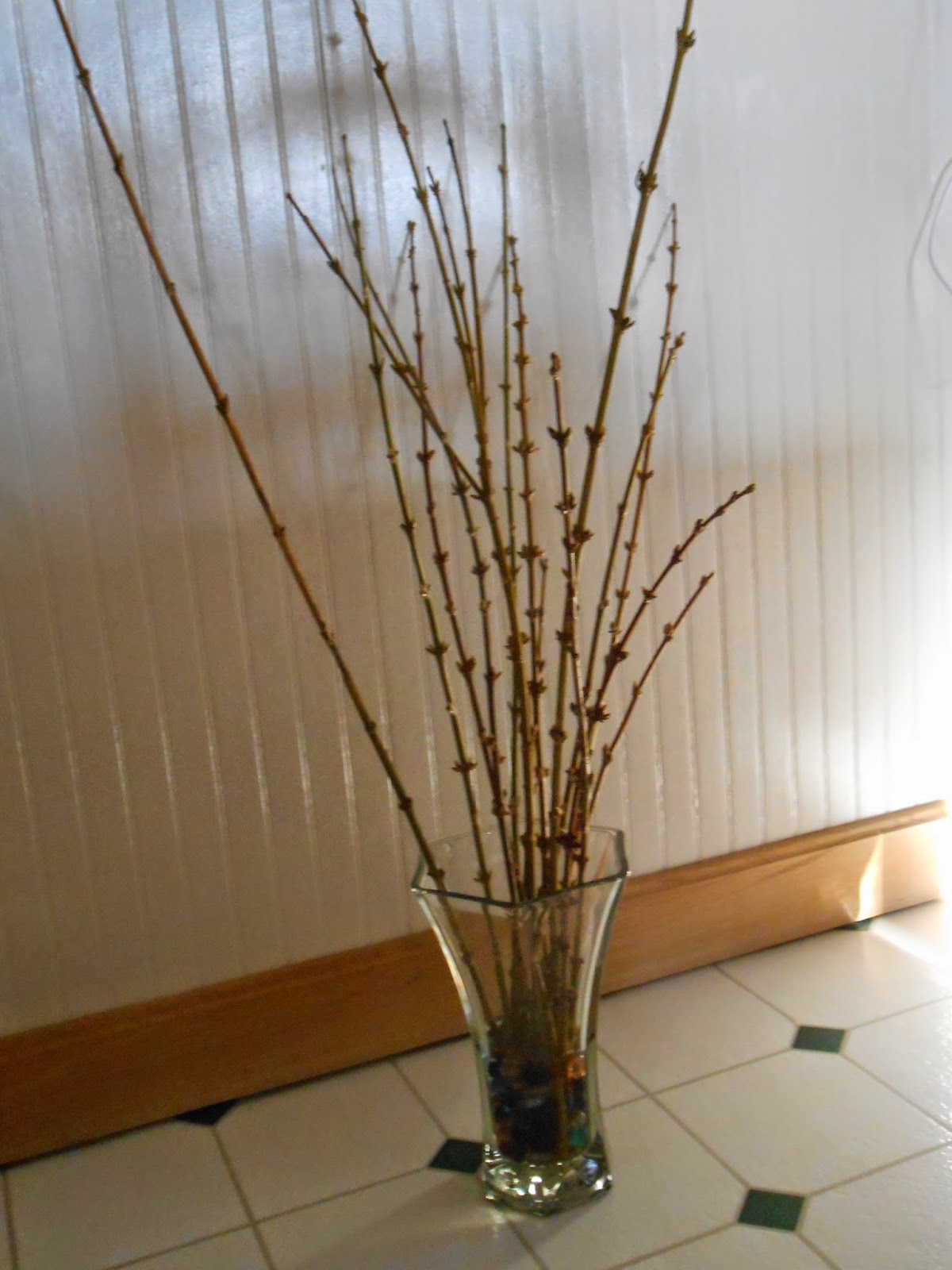 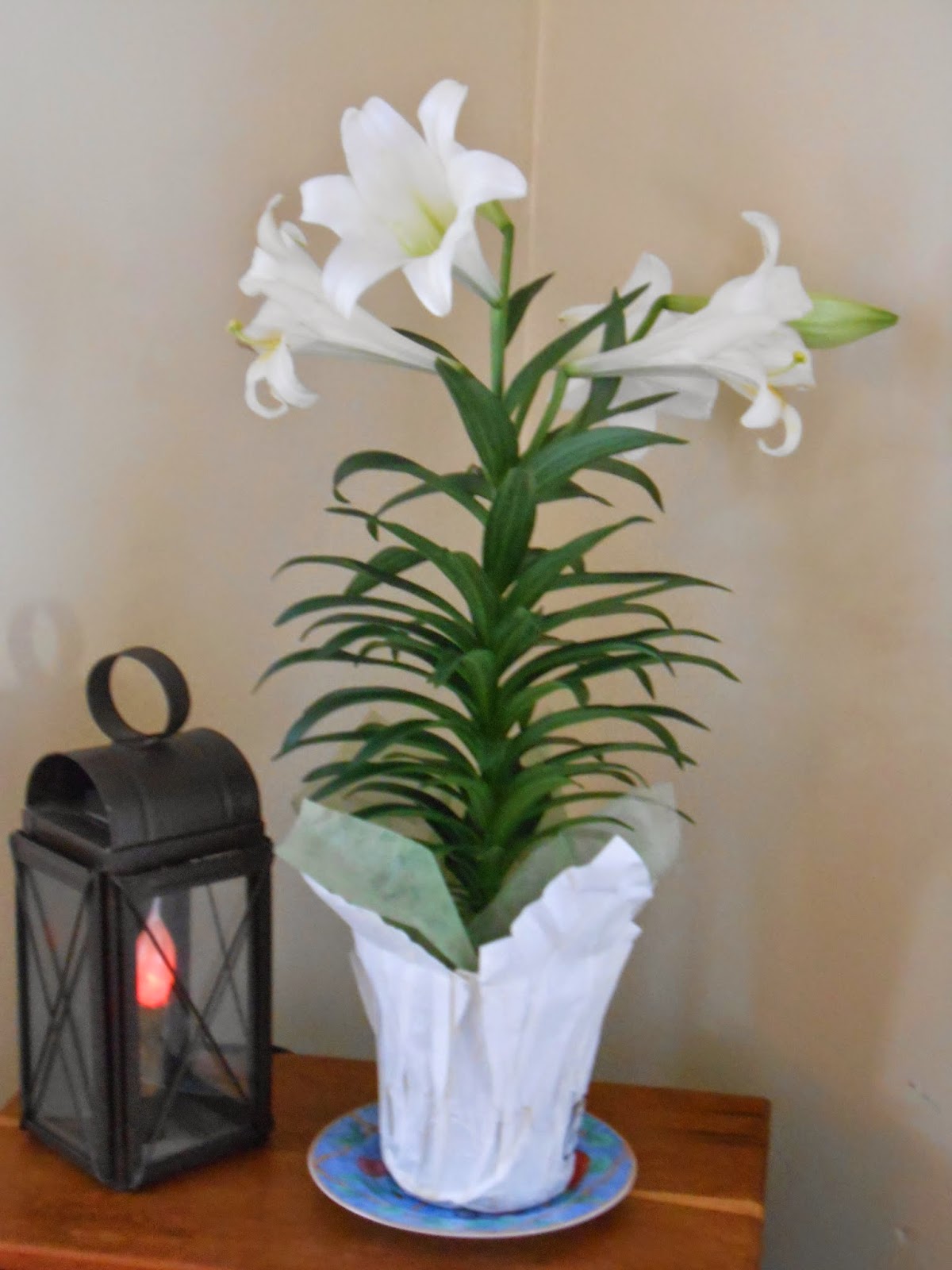 I took a break this afternoon to go out to the pasture and snap a few pictures of the herd enjoying the sunny day. Asterius is getting so big that he is looking more and more like Nikko every day. At his current rate of growth he should be the same size as Nikko by the end of the summer. (That's Nikko laying down in the foreground and Asterius in back.) 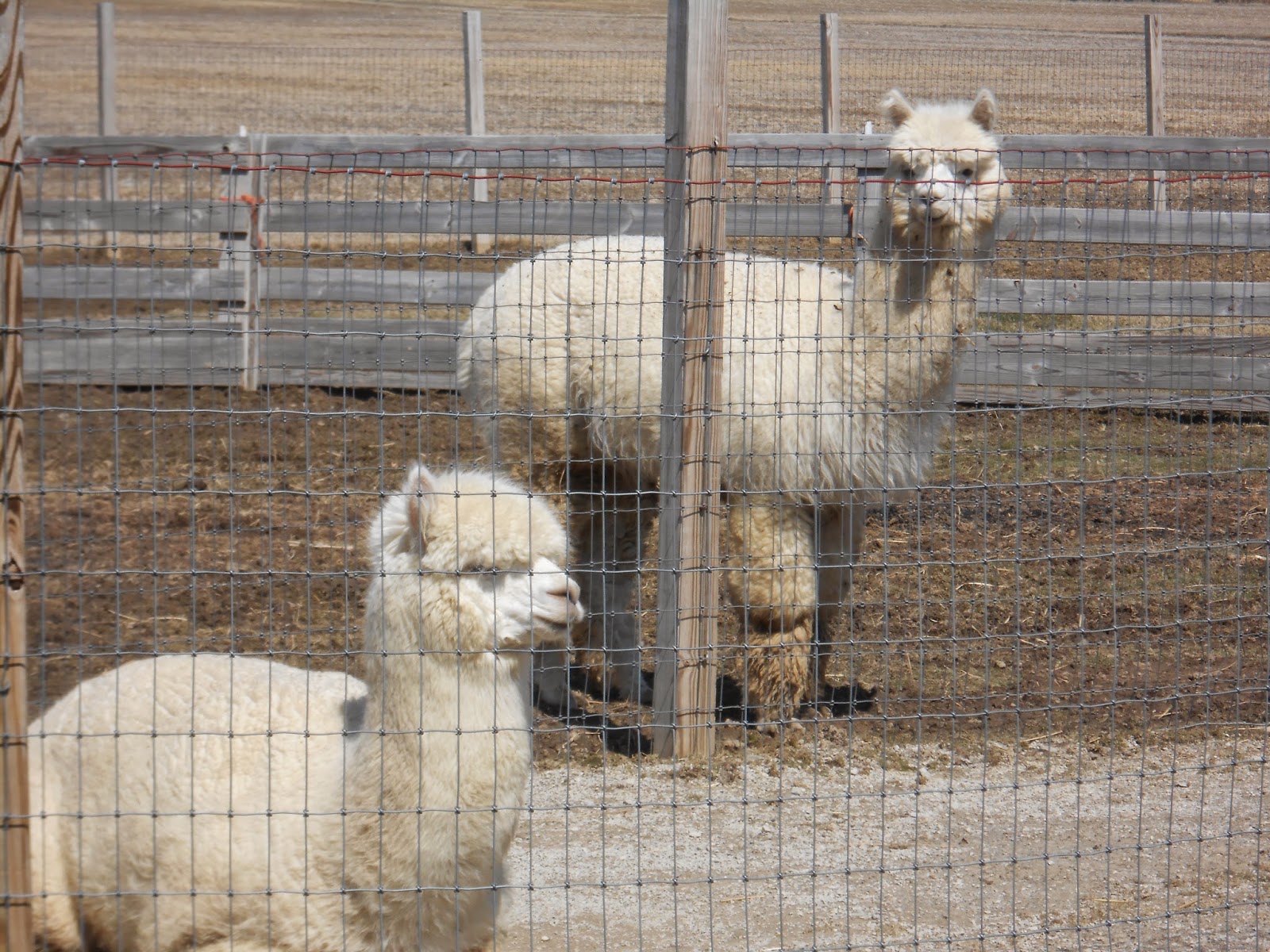 The girls and little Mocha were hanging out in the back of their pasture looking for anything that might resemble a blade of grass. The pastures are pretty awful looking at this time of year. I have read somewhere that farmers often call this "the mud season" and I can certainly see why. Rich is going to clean the pastures up tomorrow and put up a temporary fence to block the girls out of the pasture until the grass recovers. 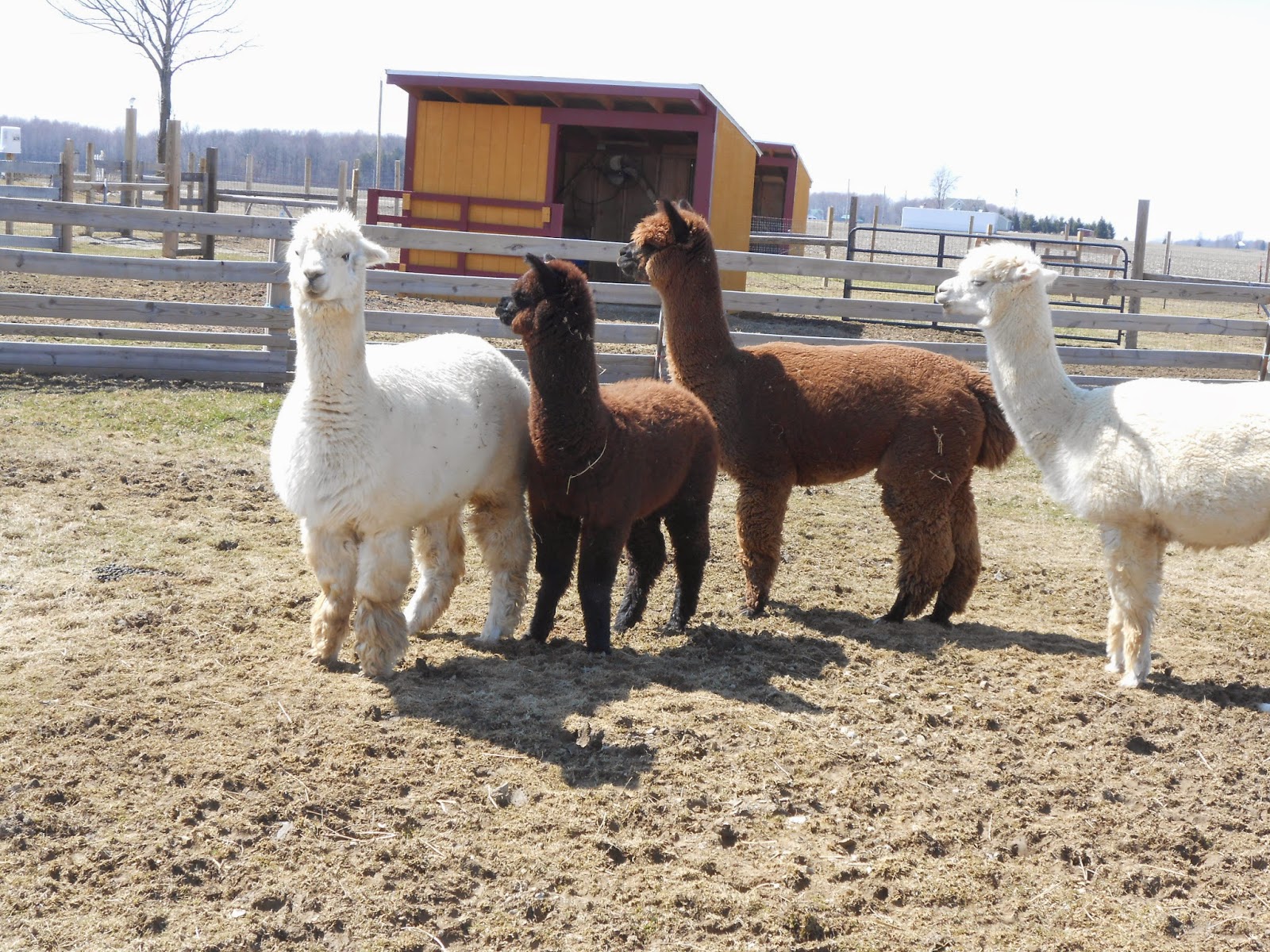 Our little Mocha-man likes to hang with Leezza. Brutus did the same when he was a little tyke. She's petty patient with him for a girl that's almost seven months pregnant. Rich went out one evening a couple of weeks ago, just at sundown and found Leezza leading Mocha and the girls on a pronking dance through the pasture and back into the barn; an activity that usually involves only the young crias. I often see Mocha sleeping alongside of Leezza instead of his mother, Mango; and I haven't seen him nursing lately either. Maybe he has self-weaned? Guess we just have to wait and see. I hope that this behavior means that Leezza is going to be a good mama when her first little cria arrives.