That huge gust of wind coming out of Seneca County two days ago was just me breathing a sigh of relief as I finished the last of my Christmas "to do" list. I have all of the knitted gifts done, all of the baking that I intended to do done and all of the gifts are wrapped and hidden.


In theory, I should be able to just sit back and enjoy Christmas with my children and grandchildren now. In theory...

There is just one little snag in the plan. Our water treatment system, that has been on the fritz for the past month isn't getting any better in spite of having four, count 'em, 1-2-3-4 service calls since Thanksgiving. In fact, it's worse. My entire house smells like boiled cabbage whenever we turn the water on. The water people are in the cellar as I write and I am crossing my fingers that they can solve the problem. My kids are all city kids and have never had to deal with wells, pumps, filtration tanks and such. I'm afraid that the smell will be a bit off-putting for them and I am hoping that it gets remedied before they arrive tomorrow.

On the plus side, I do have all of my shopping done and the gifts are wrapped and hidden away from the prying eyes of grandkids and husbands! 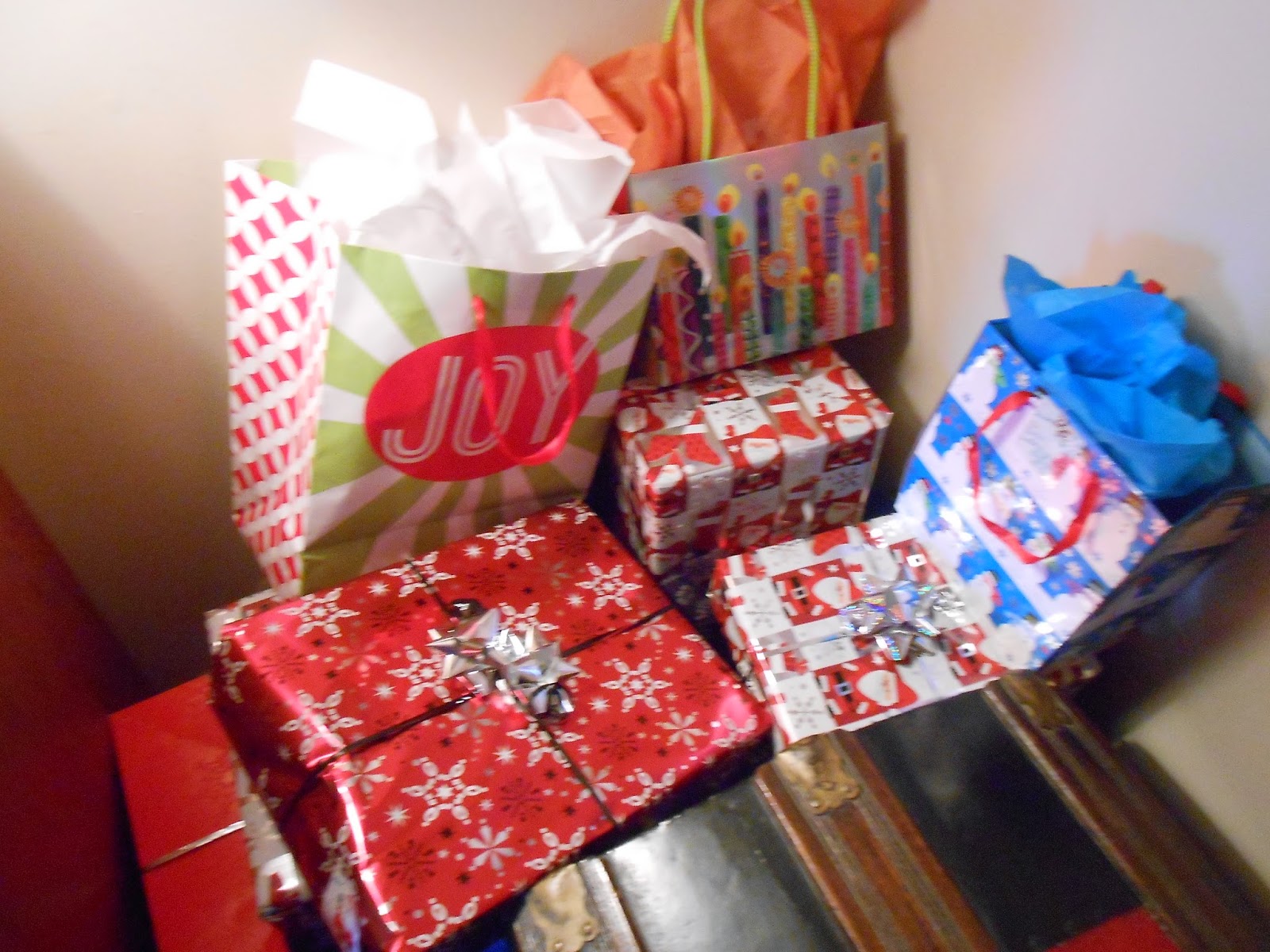 In all fairness, Rich never snoops around trying to find out what he's getting for Christmas. He prefers to be surprised. The only problem I have with him is when he decides to scan the credit card charges and wants to know the details of the unfamiliar ones. I cannot seem to break him of the habit of doing this at Christmas! He never does his shopping until the last minute and the only one he has to shop for is me. In fact, he took a vacation day today in order to go on his annual solo shopping trip to the big city of Columbus. He always hides his stash of shopping bags outside in his wood shop and does it so well that I have not been able to find it in 14 years of marriage! (Yes I do snoop and he knows it.)

My cookie baking is done. I made the usual chocolate chip cookies, gingerbread men, Greek kourabiedes (powdered sugar crescents) and chocolate toffee pine bark, a Paula Deen recipe. I often swirl peanut butter chips into the chocolate of the pine bark, making it one of  Rich's favorites. 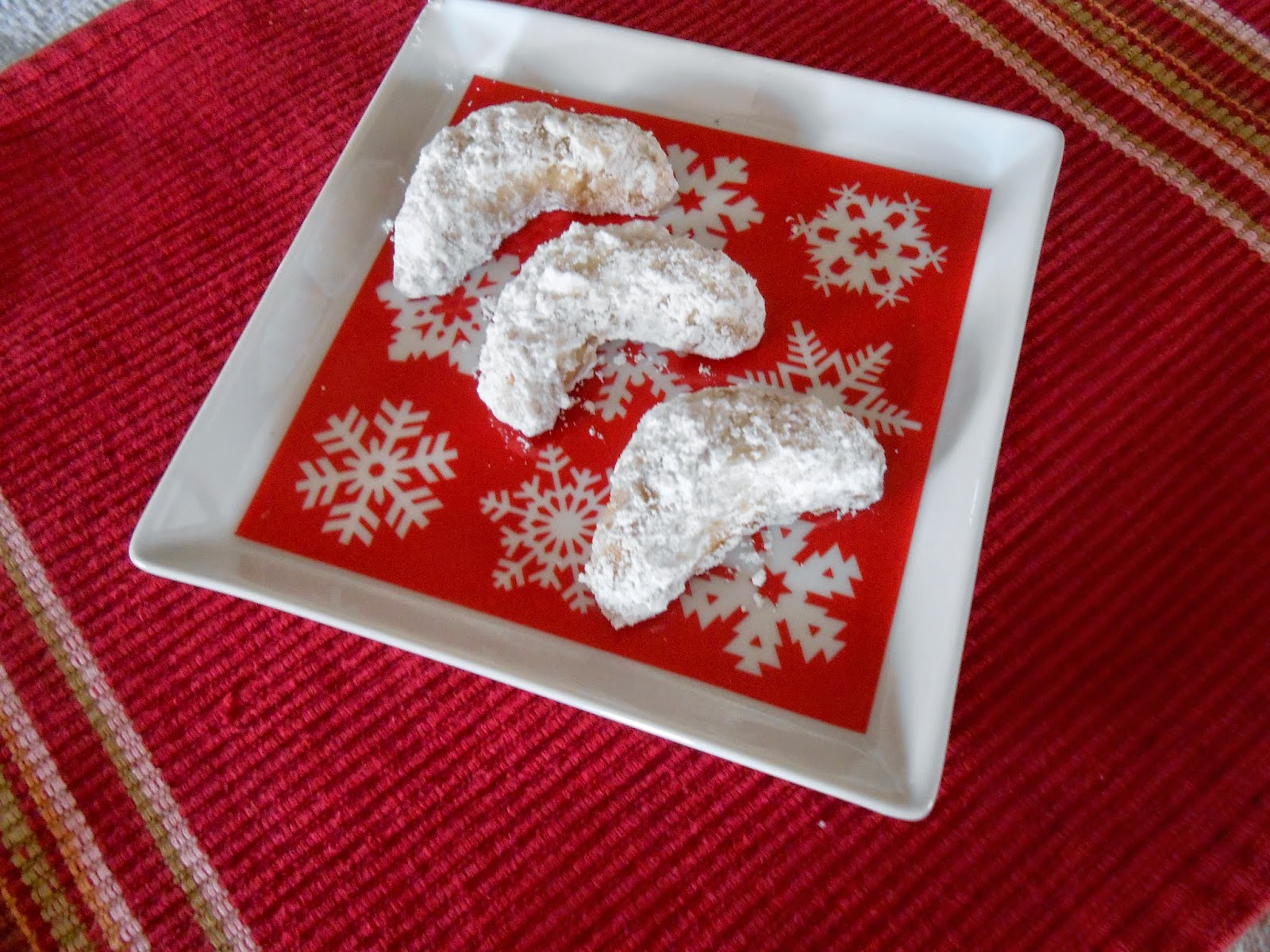 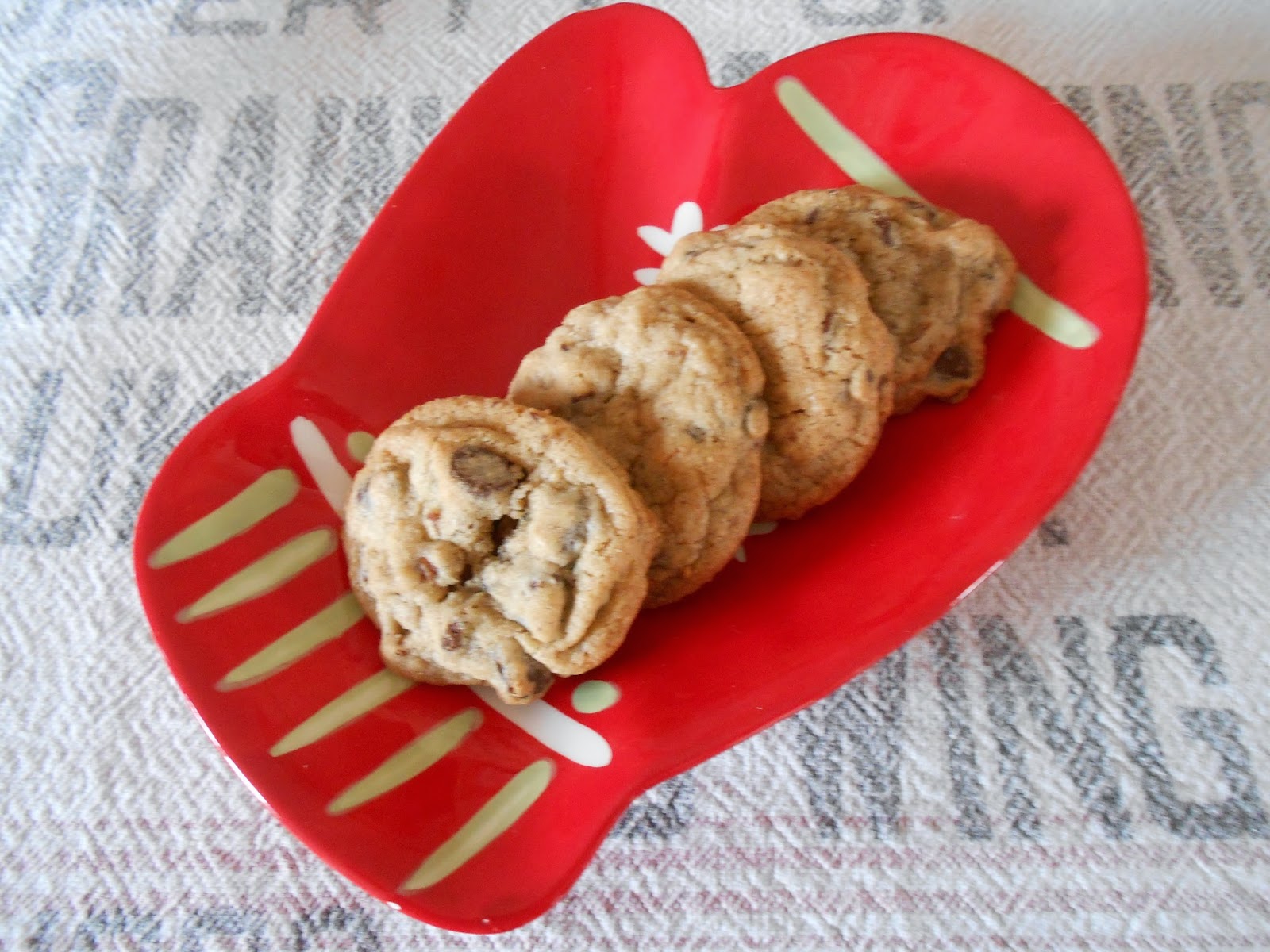 This year I added a new "cookie." It's a chocolate mint thing that resembles the traditional Girl Scout favorite. I happened to have Rachel Ray on the television as I was cleaning the other day and saw her dipping Ritz crackers into dark chocolate that was flavored with a few drops of peppermint flavoring. These are habit forming, not to mention that when you dip, you end up elbow deep in chocolate. There is no easy way to dip these but they are certainly worth it. 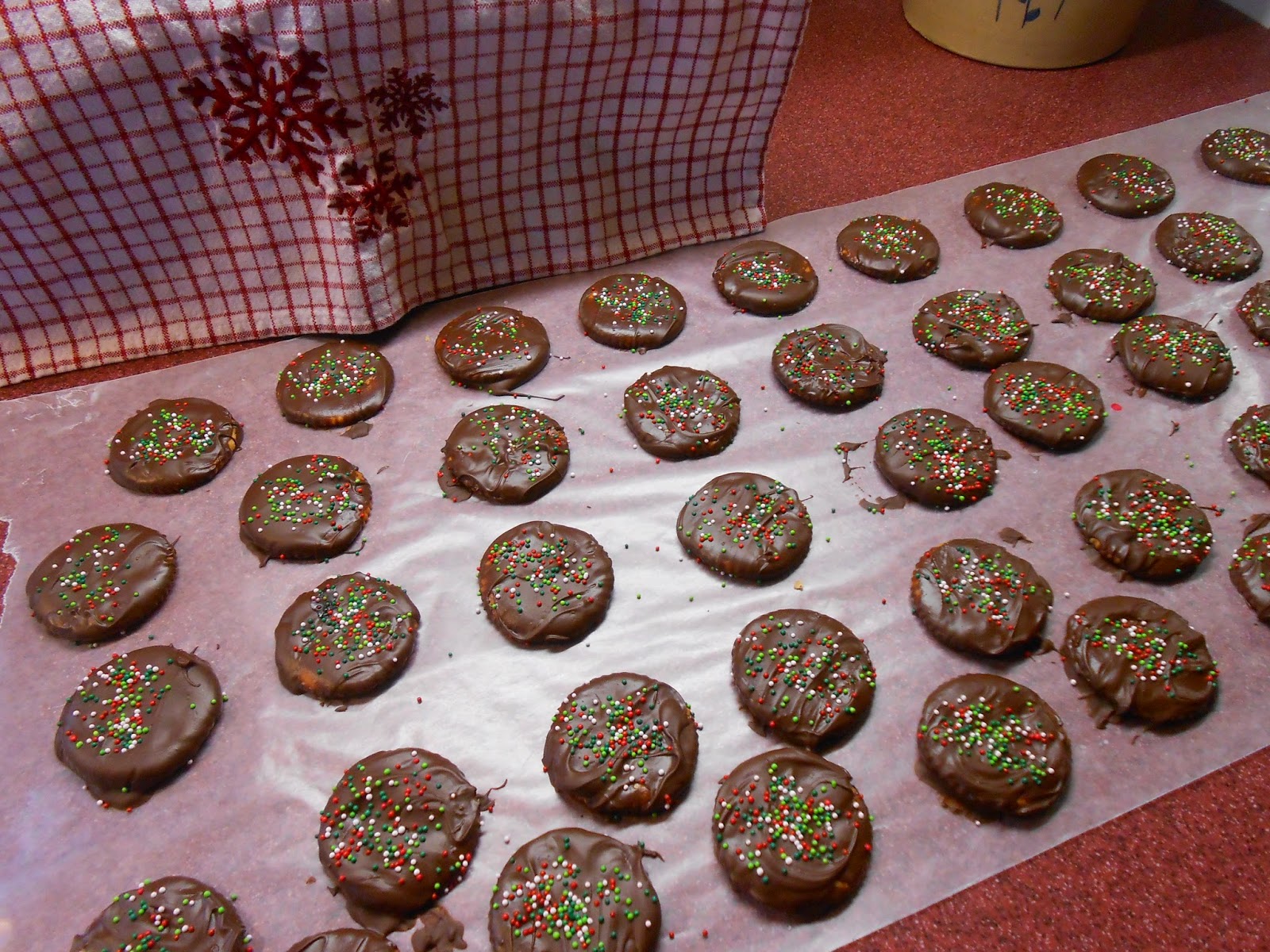 Right now I have the Chex Mix in the oven which is overlaying the boiled cabbage smell coming from the basement with a more savory odor. It sort of smells like a Hungarian restaurant! 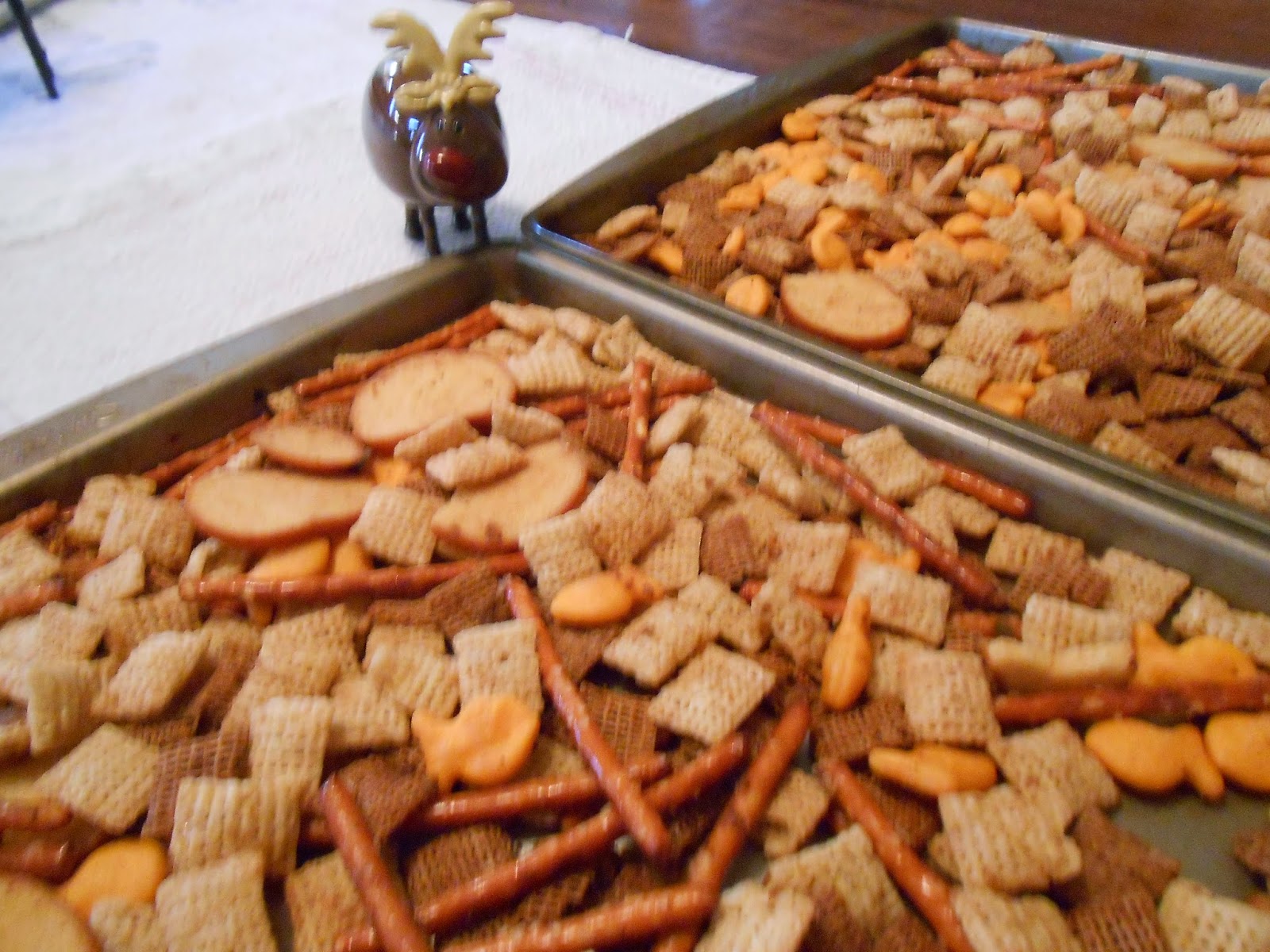 Last week we moved alpacas around into different pastures. Mango was looking very thin and we were concerned that she wasn't getting enough nutrition. She is the only one that is both nursing and pregnant, meaning that she needs more food than the other females. Mango is just a little more timid since she had Mocha and the other two were crowding her out of the feed trough so we had to put them into a separate pasture. Mango and her little boy, Mocha are now in the barn pasture and she is looking much better.

This move meant that we had to shift the boys around a bit and the two yearlings landed in the pasture directly behind the house. They have been such a source of amusement. Whenever they hear the back door open they come running to the gate hoping that it's feeding time again. It doesn't matter that they may have just been fed a half hour ago. These guys are growing and spending so much energy playing that they are eating machines much like teenage boys. The other day when we had a rare moment of sunshine they must have been feeling especially feisty because when I looked out they were "neck wrestling." 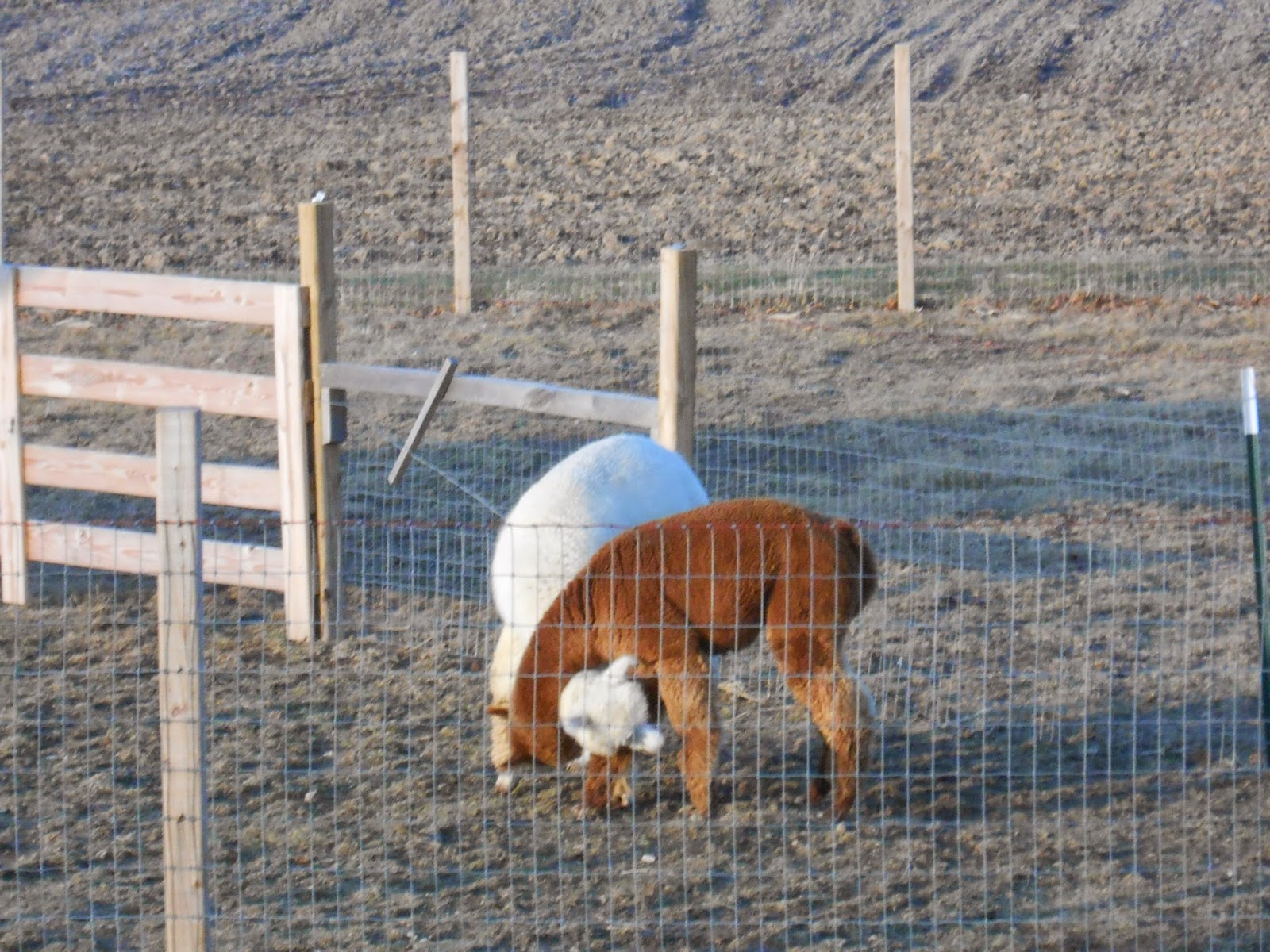 They start out in a neck-to-neck position, entwining their necks and eventually circle around into a front to back stance, each one attempting to grab the other's back leg. Quite often Asterius, the larger white animal, will get a good hold of Brutus's back leg and lay down as he hangs on to it. My little guy, Brutus, trumps this move by twisting and laying down across Asterius's neck which makes him let go. I look on from the back window and cannot stop laughing at these two. 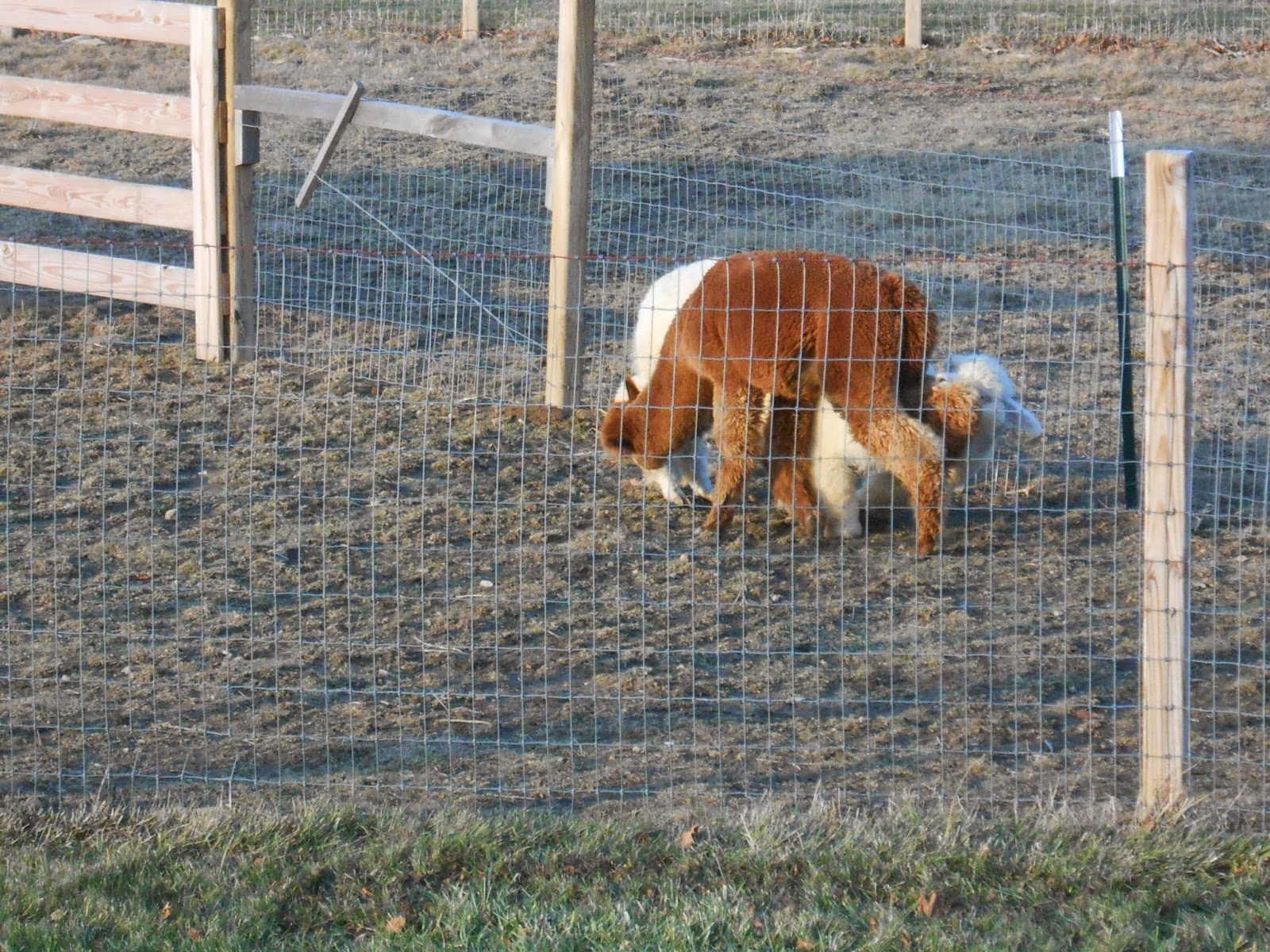 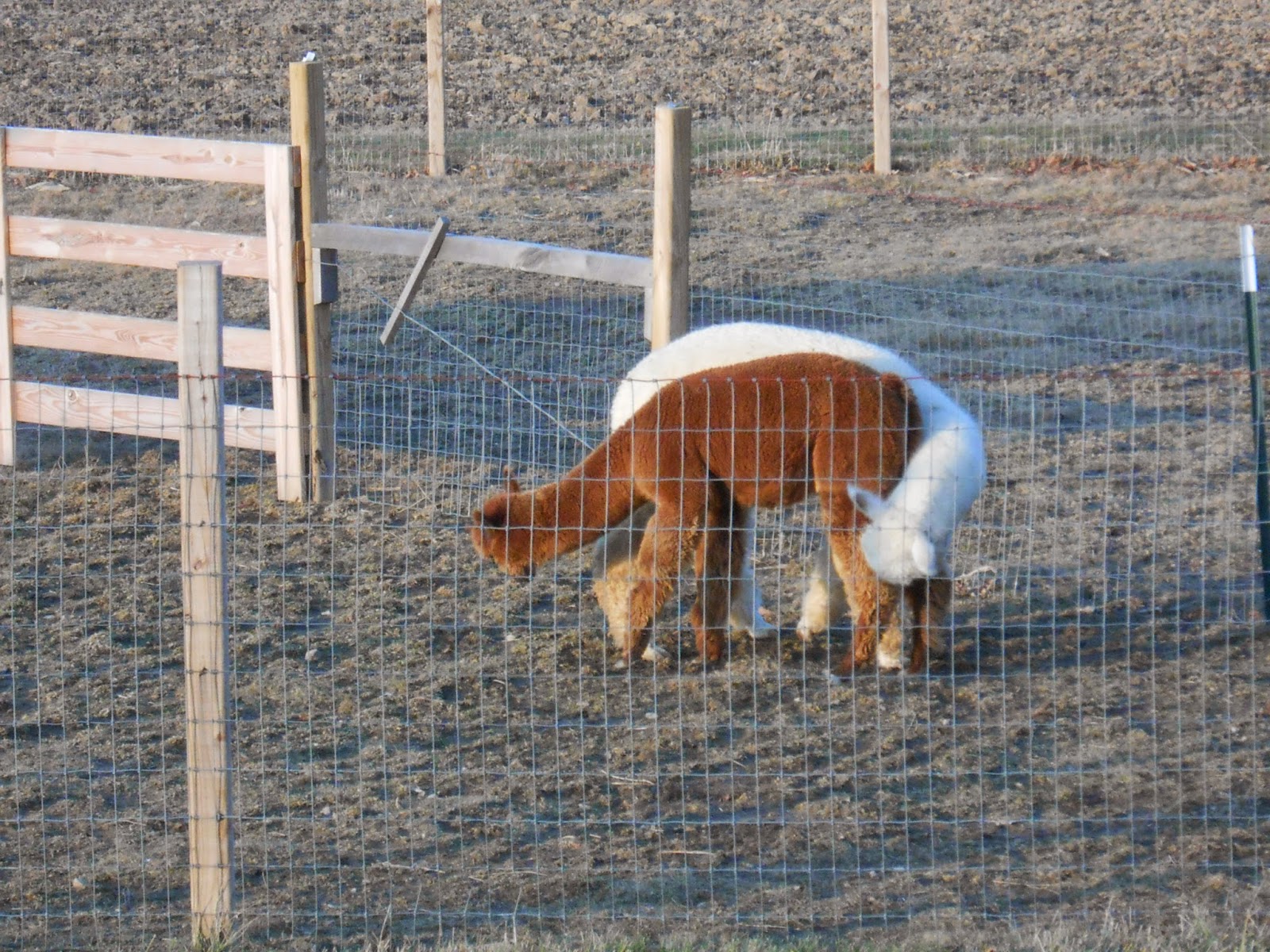 I have no transition for these last two pictures other than, this is what our evening looks like after the busy days that we have been experiencing lately. 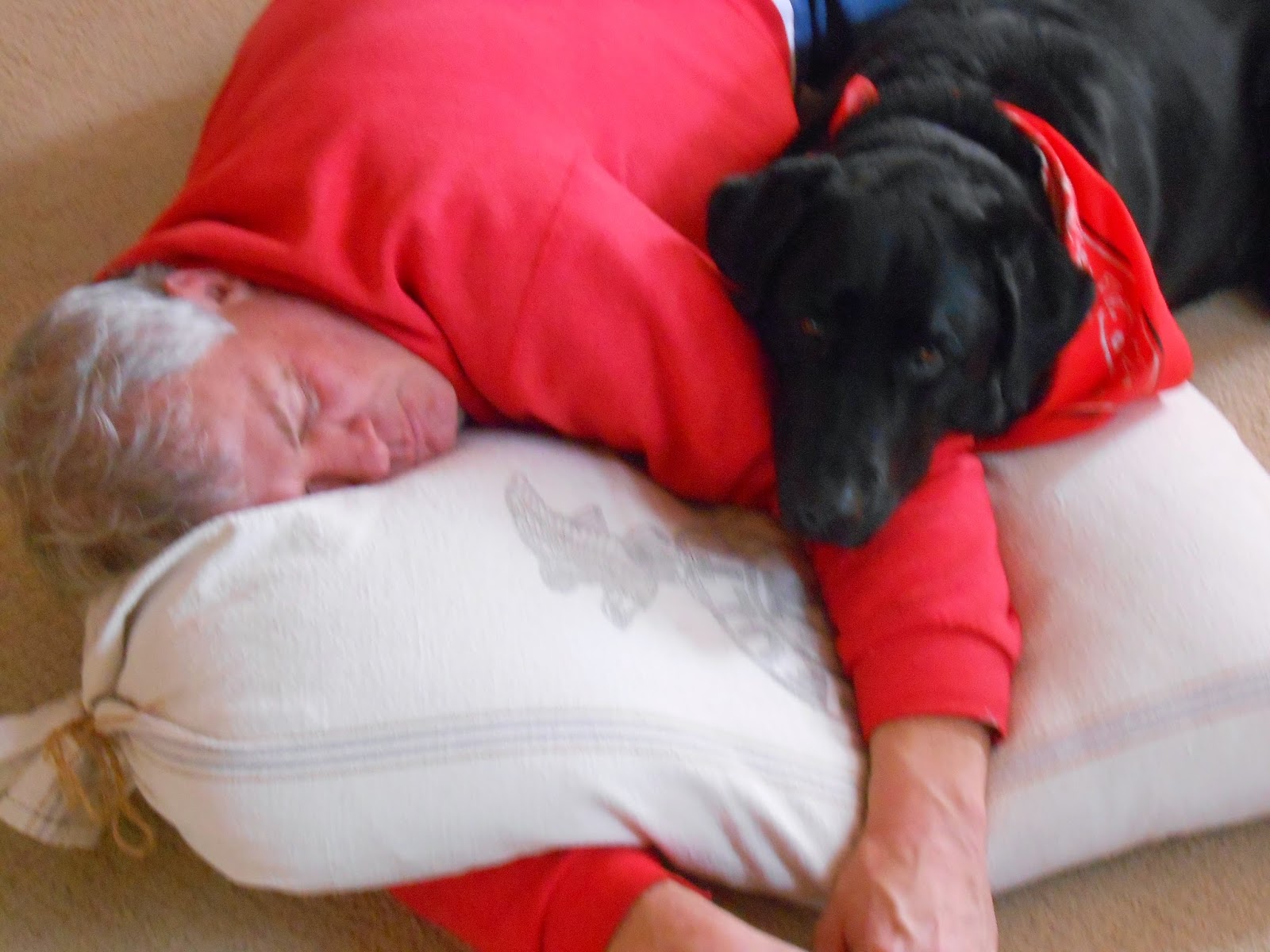 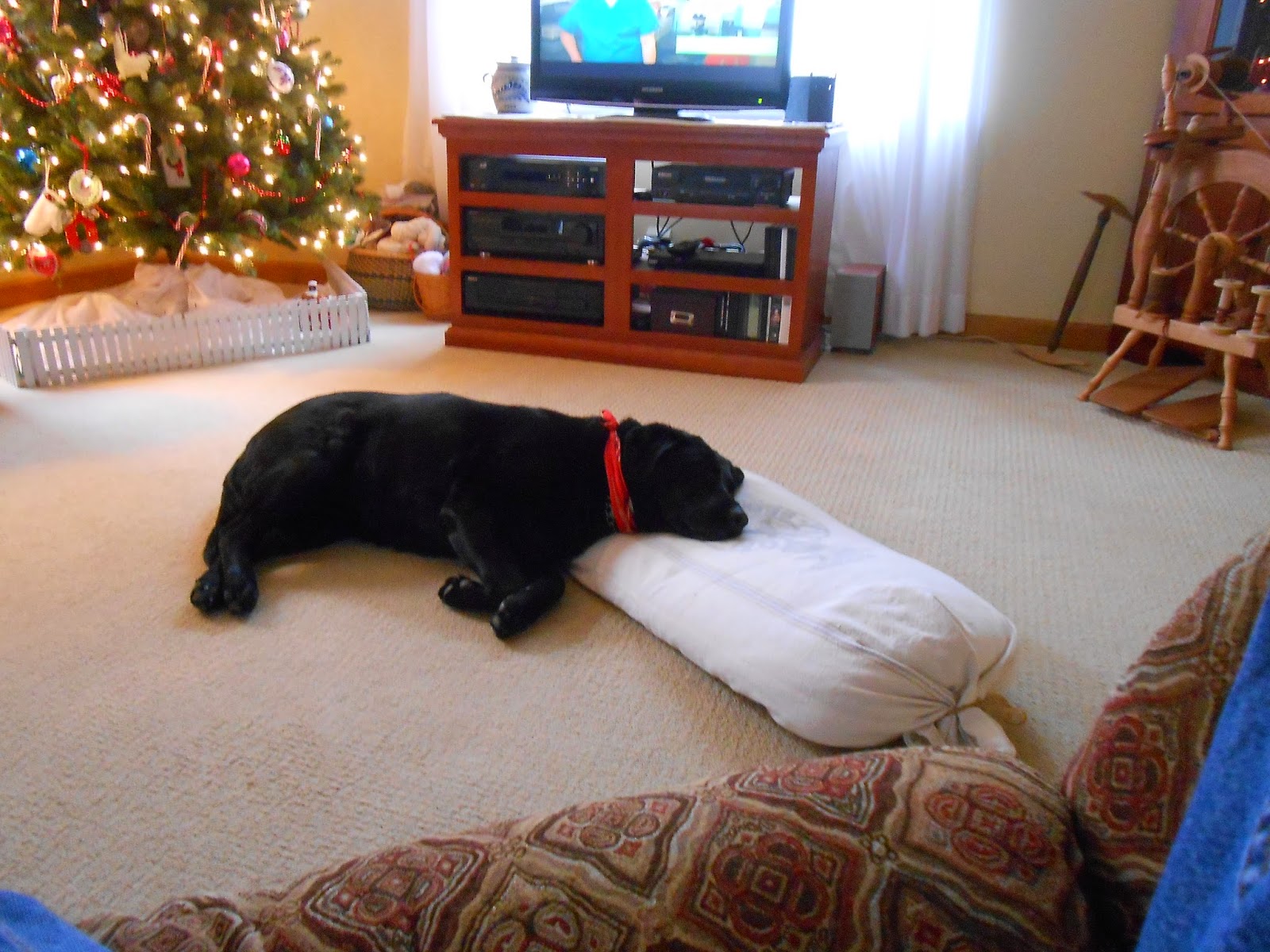 Posted by Buckeye Star Alpacas at 10:11 AM