Farm Visits and Spinning at the Nature Preschool

Before I retired I worried that I might be bored. The fear was unfounded; I have been busier than I could ever have imagined. Last week I stayed with my two teen-aged grandchildren, Max and Olivia, while their parents were out of town on business and pleasure. I necessarily assumed my daughter, Amy's, schedule and I haven't been in a car so much since my own girls were teens. From 2:30 p.m. each day until almost 9 p.m. each evening I was picking up kids and dropping off kids and picking up kids again. By bedtime I was exhausted. I had forgotten how much running and waiting in parking lots I had done back in those days before the first kid could drive. Olivia has her learner's permit and is doing quite well but it means that her passenger, me, has to be on the alert and coaching all the while she drives. She drove most of the way home to Dublin from our house on Sunday.

The kids came up for the weekend when their parents left town. Rich and I had a great time making wood fired pizzas in the old wood stove with them on Friday night. Then on Saturday, Olivia wanted to attempt making macaron cookies with me. It was an involved process but we turned out a yummy lemon macaron with lemon buttercream filling. 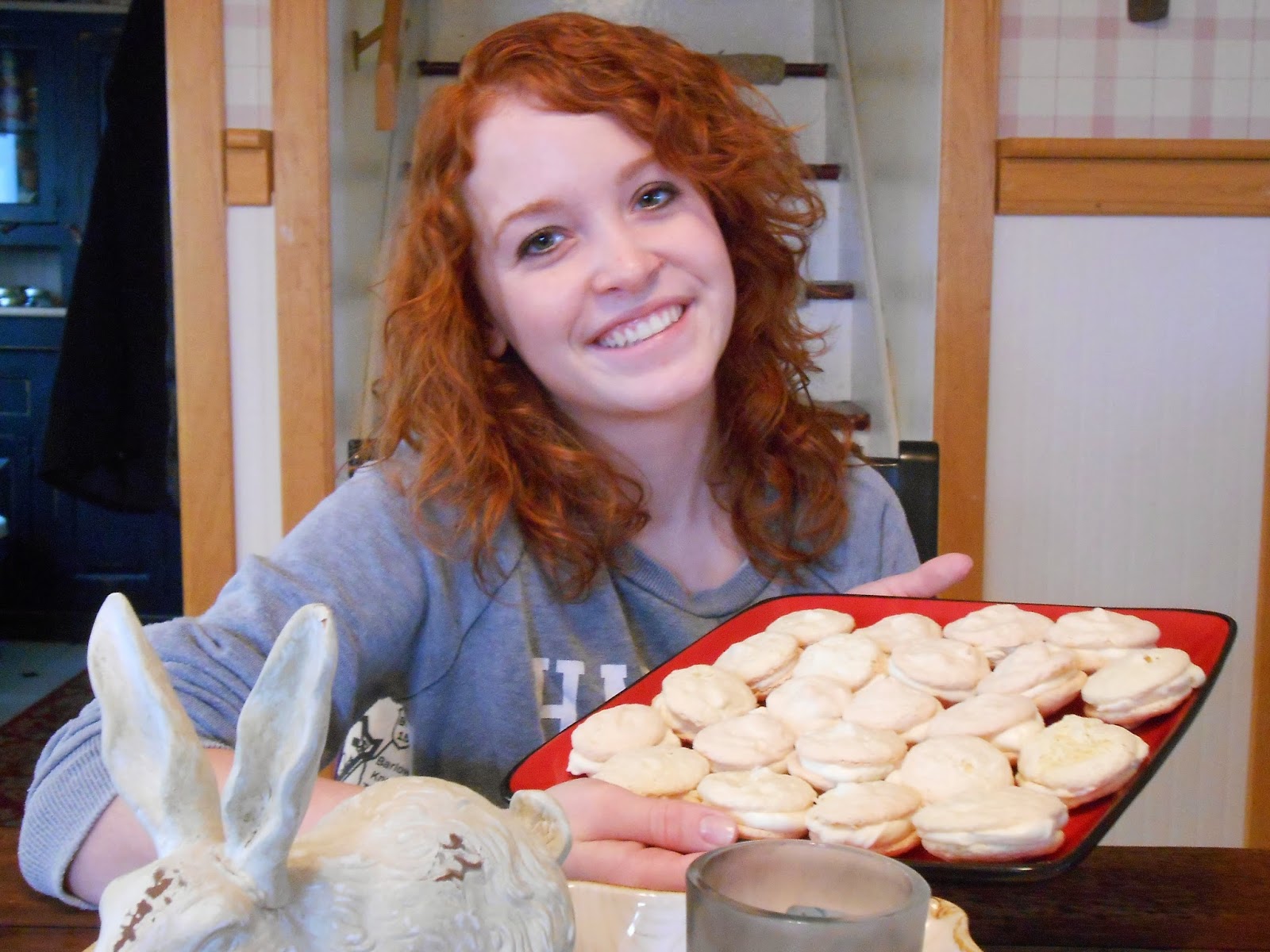 Max spent much of the time in front of the TV watching the "March Madness" basketball play offs; which apparently last until April since the last game is tonight. He slept in and just ate the rest of the time. I think he was resting up from his hectic week day schedule of two practices a day; one for track and the other for AAU basketball. Then on Sunday we returned to their home in Dublin. I had a lovely week with the grandkids and being able to stay with them is definitely a benefit of retirement.

When I got home I received a phone call with a request for another farm visit. This was a result of Yolanda's visit a couple of weeks ago. Tiffany Kimmet, a professional photographer and friend of Yolanda's, wanted to come out to take a few pictures of our animals. It was our herd health day where we harness up the animals and walk them, clip toenails, and administer any booster shots that they might need. A perfect time for visitors. 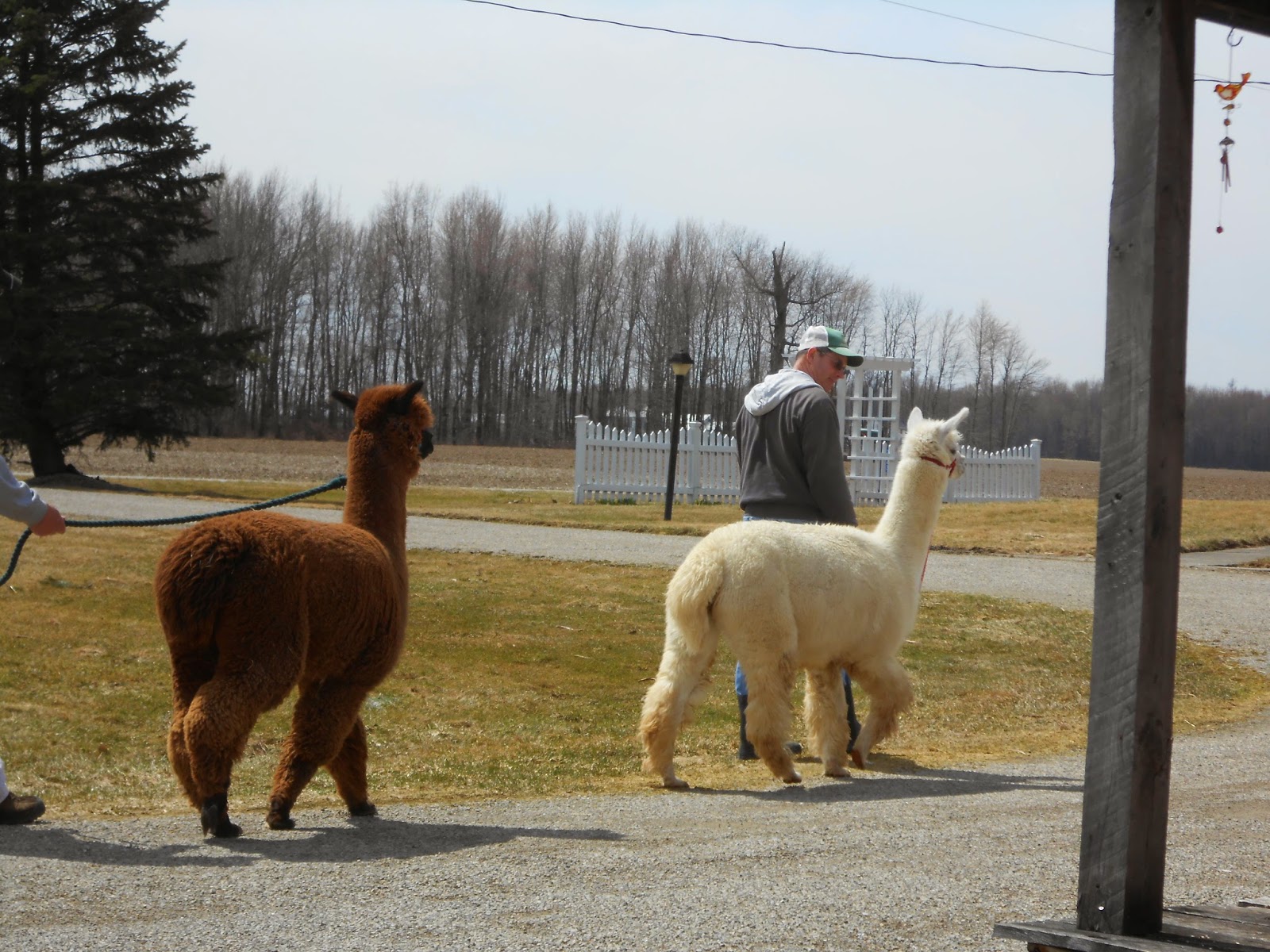 My brother-in-law, Danny, Rich and I walked the girls out and around the property which also gave me an opportunity to snap some good pictures of them. Rich walked Nikko, our young herd sire, out and around the property while Danny and I worked with the little guys, Asterius and Brutus, in the pasture since they are only just beginning their halter training. It was a very successful training and health day. 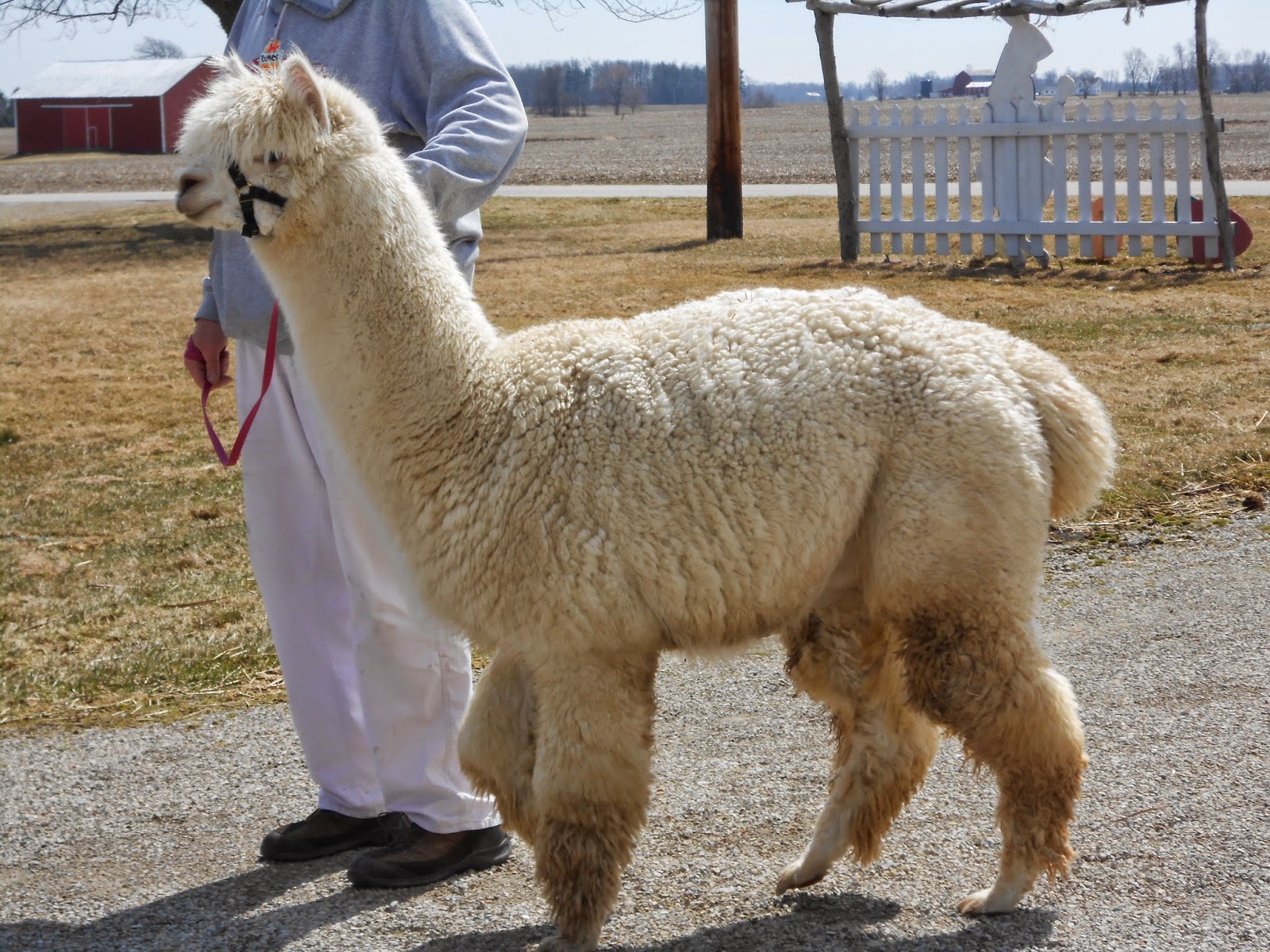 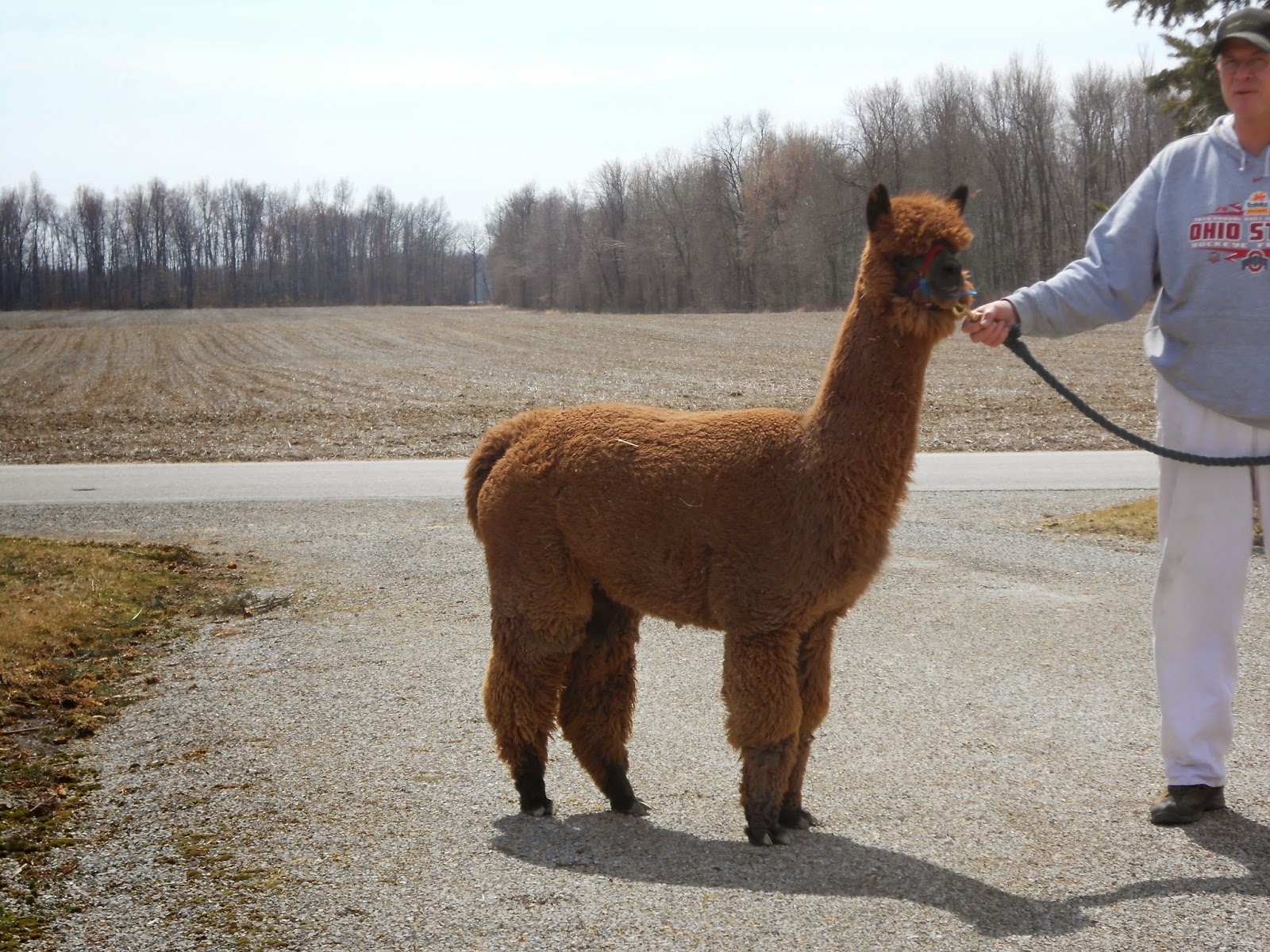 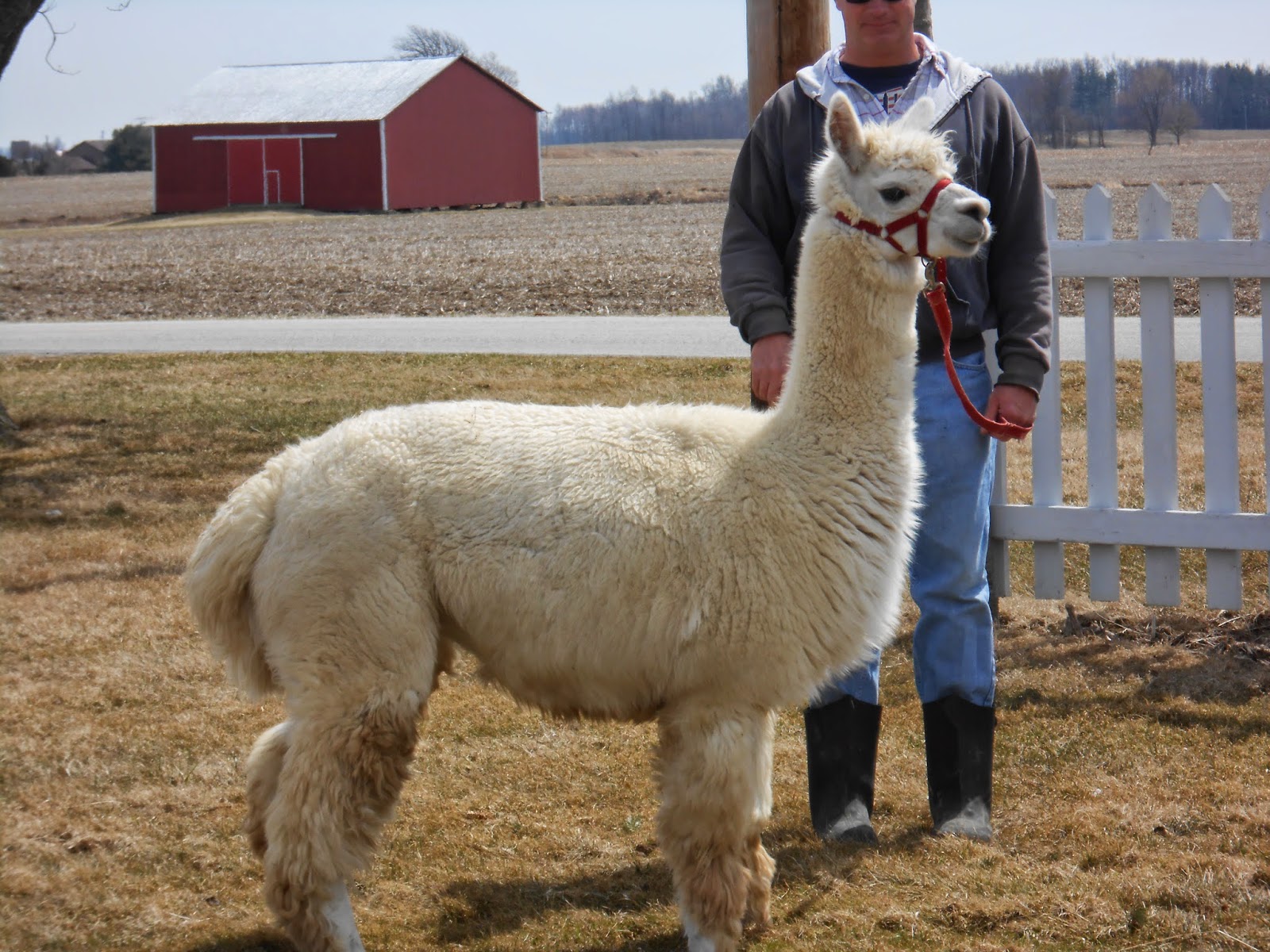 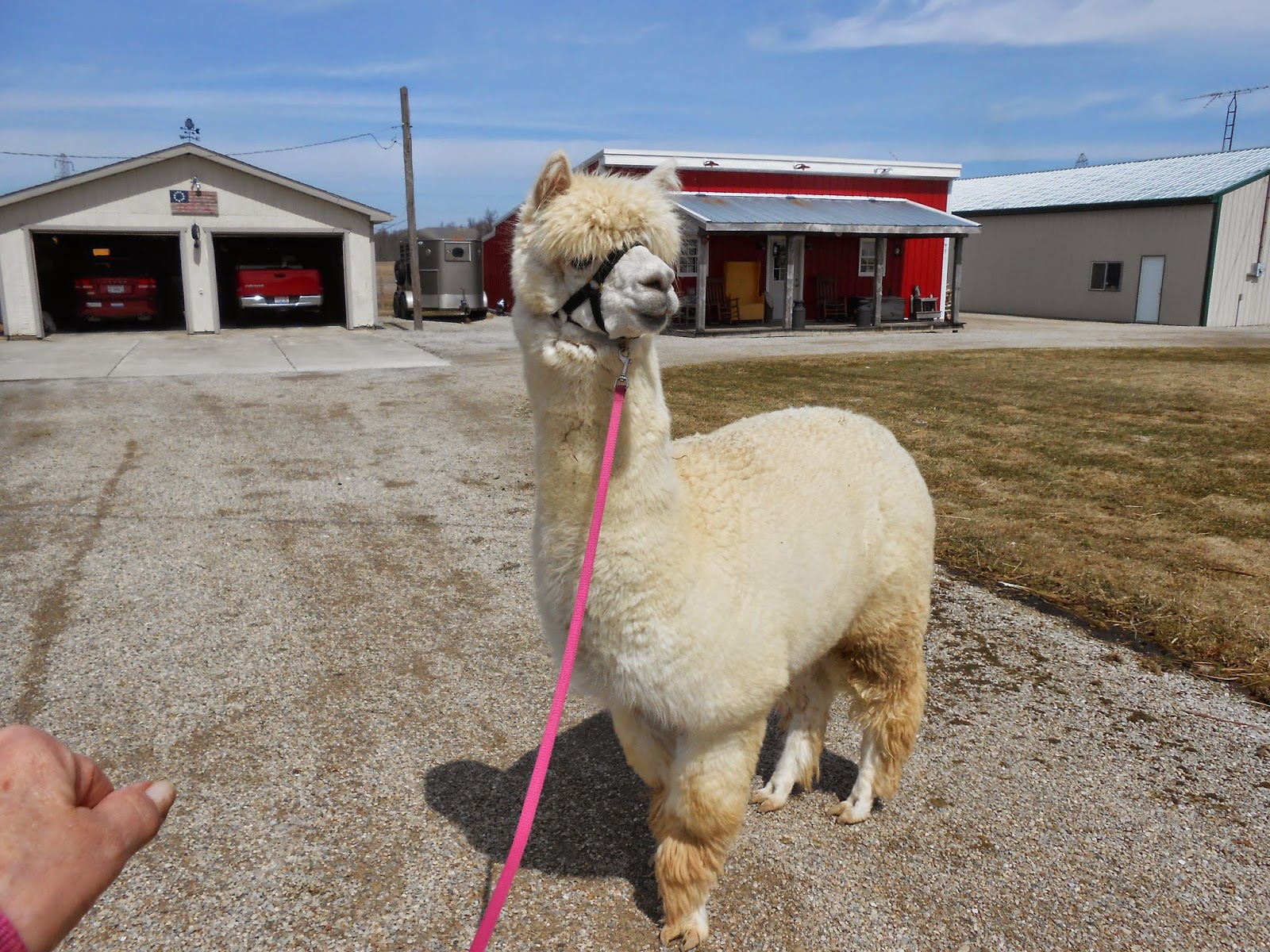 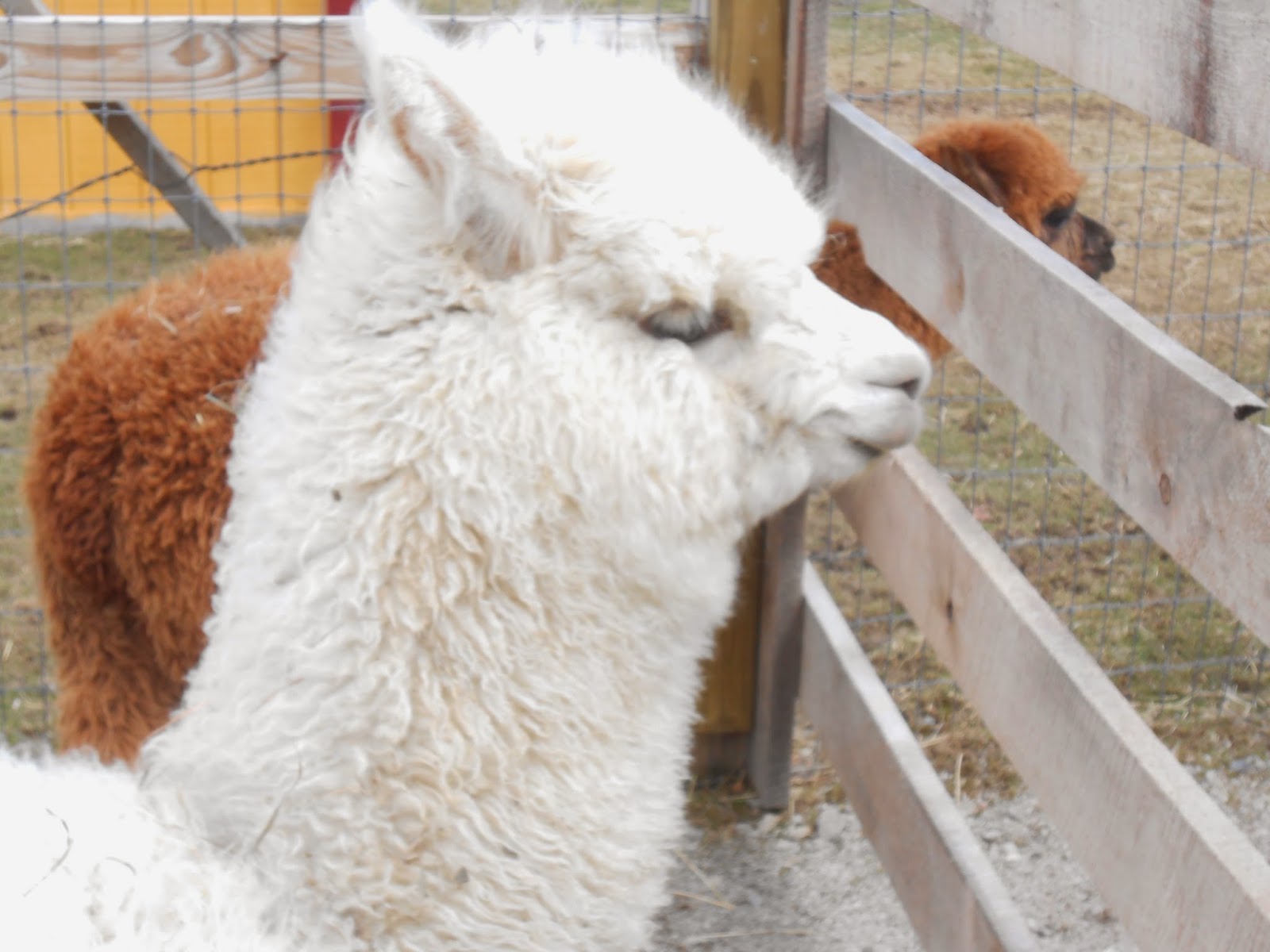 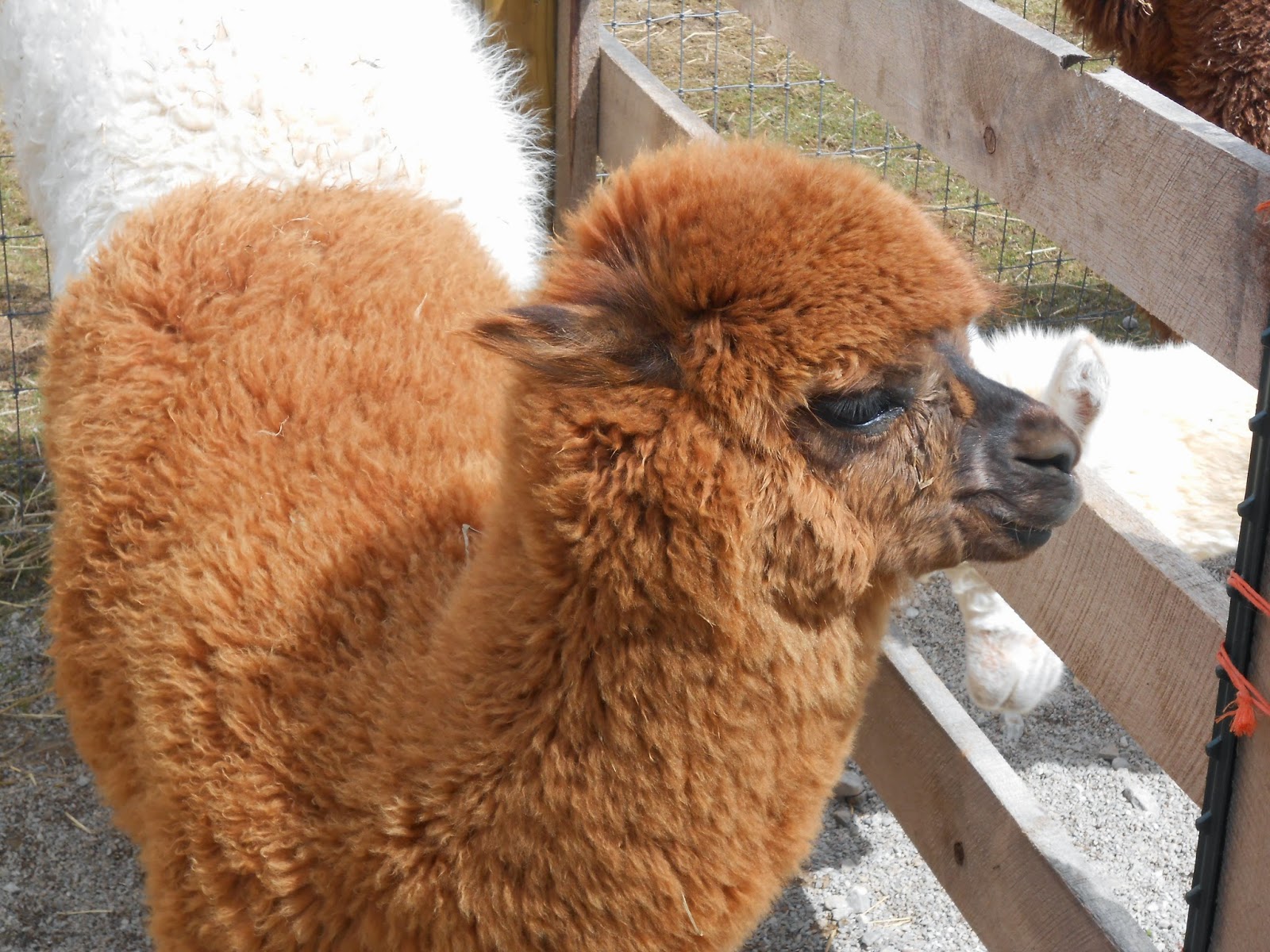 Tiffany, whose website is www.subtleverse.com  , snapped many, many pictures while her two children asked many, many questions about the alpacas. The kids went into the pen with us where the animals ate sweet feed from their hands. I enjoyed answering their questions and teaching them about alpacas. Clearly one can retire from formal teaching and still be a teacher. I'm loving it. Tiffany was kind enough to send me a few of her photos with permission to use them on my site. 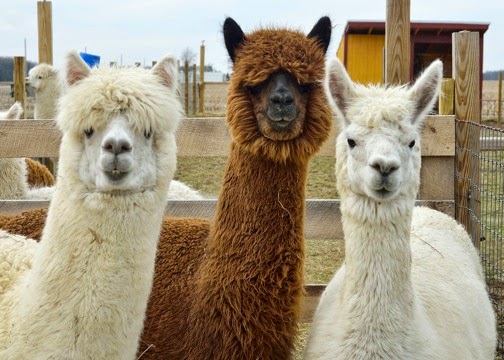 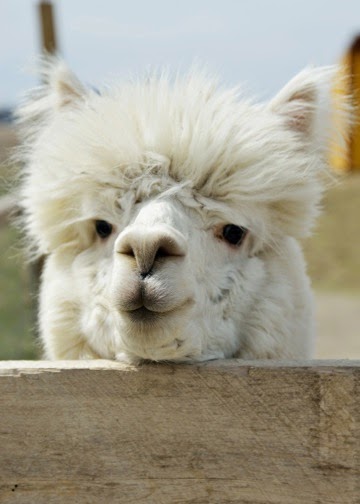 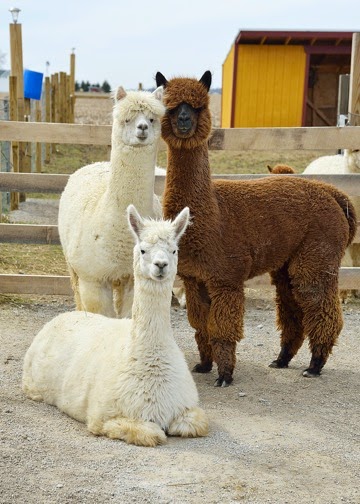 
Clearly Tiffany's photos were much more professional than mine taken with my little pocket Nikon Camera. The alpacas seemed to cooperate with her and pose, whereas, they usually try to get away from me! Maybe it's because they know that I'm the one who gives shots and helps to clip toenails.

Today I had another fun experience. I took my little spinning wheel that I call Brigid and went around the corner to our local Garlough Nature Preserve where there is a pre-school with a nature based curriculum. I had met their teacher, Linda Rose, who invited me to do a spinning demonstration in conjunction with a field trip that the kids made to a local sheep farm. I made a simple poster with pictures of alpacas so that I could explain the differences and similarities between sheep and alpacas. The kids enthusiastically asked questions and made comments to let me know what they remembered about sheep. Then I showed them how to spin yarn. After I was done spinning and talking I allowed those who were interested, to come up and try to make the wheel spin. Young Joseph, whose parents own the sheep farm and who I remembered from the Oktoberfest came up first. He had been enthralled with the spinning last October and was really interested in how the wheel worked. He only reluctantly ceded the wheel to the next child in line. In all, I think it was a pretty successful demo since I was able to hold the attention of most of the 3, 4, and 5 year-olds for almost twenty minutes! I would love to go back sometime and take a couple of the alpacas with me. Rich and I will try to arrange it.
Posted by Buckeye Star Alpacas at 3:00 PM