This is what alpacas look like underneath the thick coat of fleece that they accumulate all winter long: 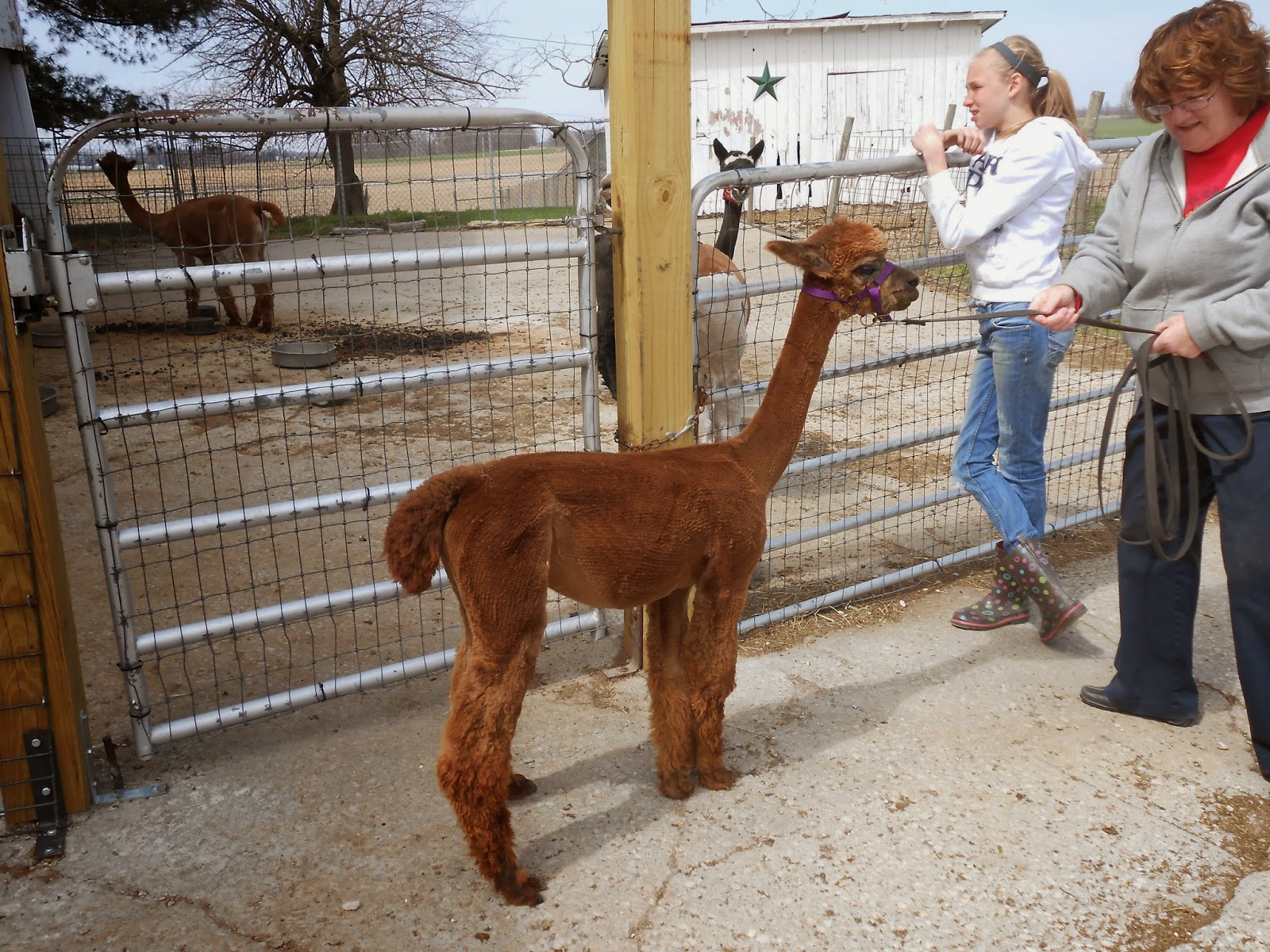 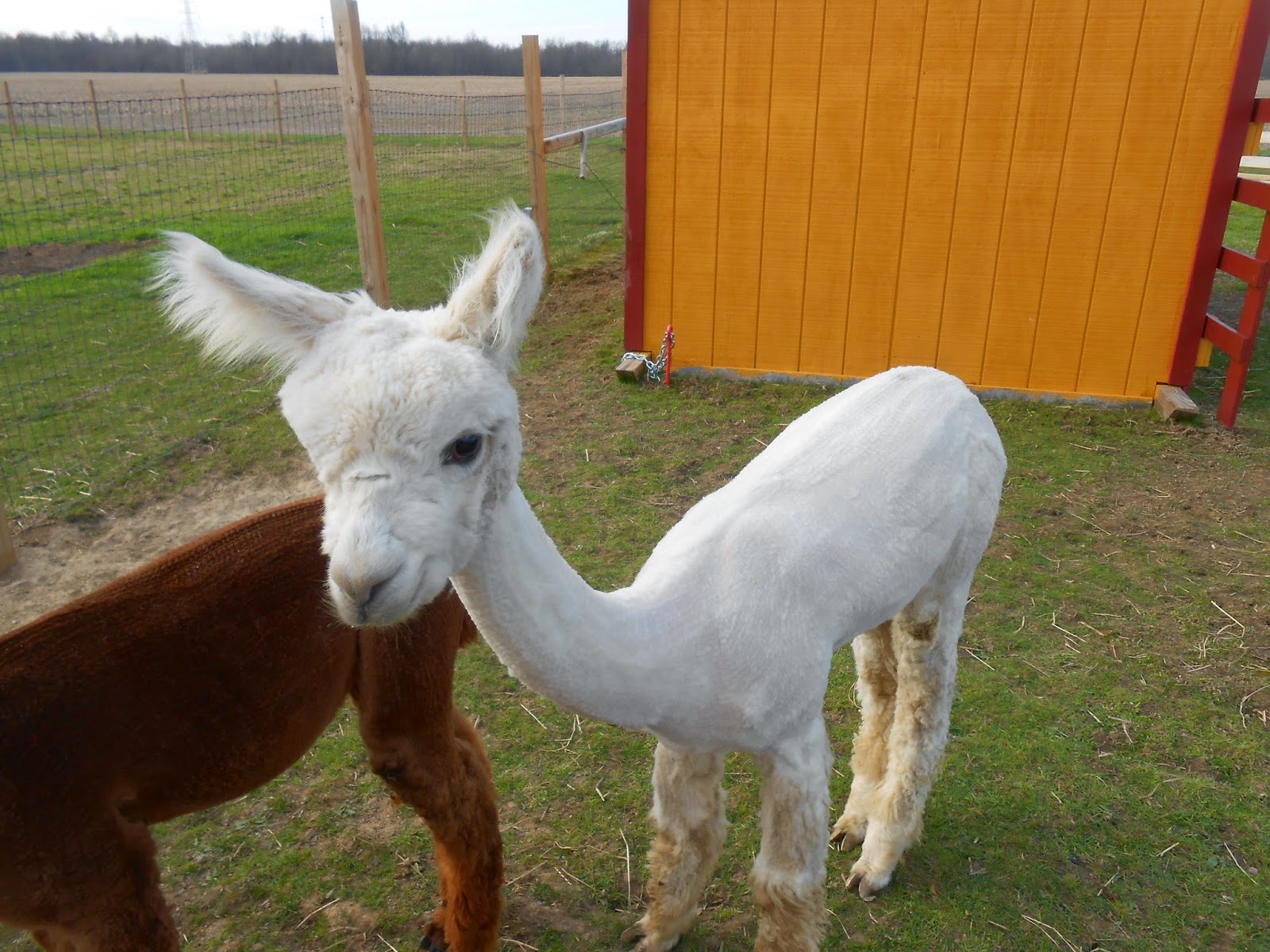 Late Sunday morning, Rich and I loaded up the three girls first and drove 15 minutes south to Grass Run Alpacas where the shearing session was taking place. Owners, Myron and Rhonda Campbell, very warm and friendly people, opened their farm as a shearing center for us and other alpaca owners. Rhonda's 4-H group even put on a lunch for volunteers who helped at the shearing.

After assisting with the animals that were in the queue ahead of us we led our girls in for their turn. Our beautiful Leezza quietly and calmly submitted to shearing much the same as she had last year. She is such a gentle, sweet animal and once she is harnessed up is so easy to handle. She was our "showgirl" last year at the Huron County Fair where she won high praise from the judges for her fiber and configuration. Took screeched through the whole process just like she does whenever we clip her nails or do any health related procedure on her. She behaves well when we simply take her out for a leisurely stroll. It's just the beauty and health procedures that she objects to! Mango, on the other hand, spit violently and shrieked so loudly and continually that she drew a crowd of gawkers. Nearly everyone who was on the farm, and there were many people there, was drawn to the barn where the shearing was taking place to see what could possibly be causing such a noise. Even though Rich gently held her head and talked calmly to her, Mango was downright embarrassing in her protests. She has been a different animal since she was bred and Rhonda advised that this often happens and they return to their normal self after delivery. We can only hope so! 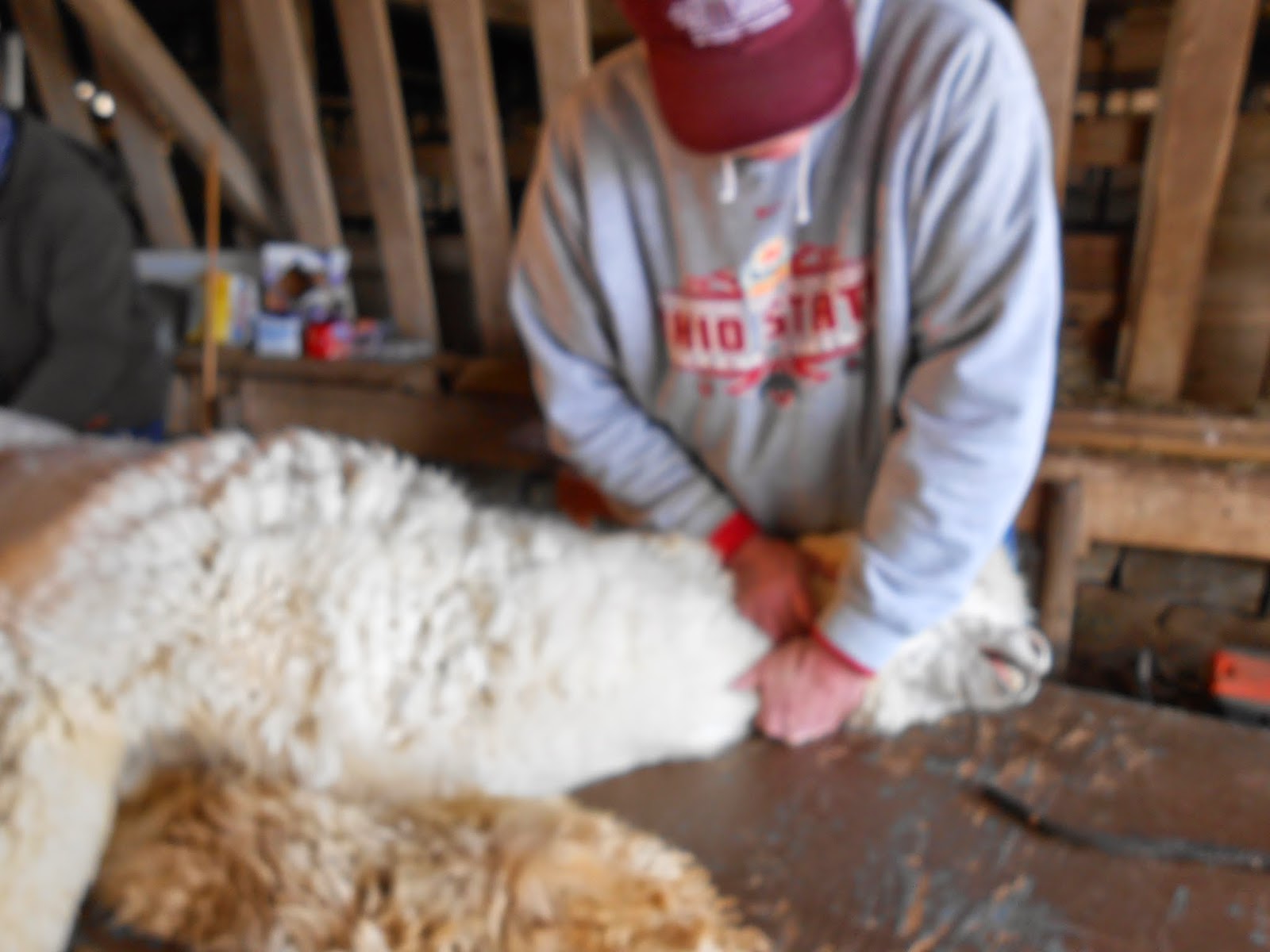 Mango gave us an exceptionally fine, lustrous, dense, crimpy fleece and I anticipate have quite a bit of yarn made from it. I will be delivering  it to the mill myself on Monday so that I can get the advice of the pros on what type of yarn to order. I cannot wait to get it back and to start a knitting project with it. Oh yes, I also plan to sell some of it in my Etsy store and in the store on our farm.

After the girls were done we loaded them up and returned home to repeat the process with the boys. The girls were happy to be back in their own pasture and we gave them an extra treat of sweet feed as a welcome home. Then we loaded up our herd sire, Nikko, into the trailer and the two little ones, Brutus and Asterius, willingly followed him into the vehicle. This was the first time the little boys had ever been away from home and they traveled well.

When we arrived back at Grass Run there was another group ahead of us so Rich and I joined in and helped in the shearing process. After their first animal was completed the next one in line, a large brown female, balked and pulled away from the little boy holding her. He and a couple of others kids charged toward the animal attempting to catch her. They had apparently not learned Rule #1: Never, never, never run at an alpaca head on. They are prey animals and their instinct is to use their speed to escape capture. She took off down the sloping yard and out into the corn stubble of an adjoining field with several children in pursuit. Rich and another man who had been assisting, joined the parade, both shouting at the children to stop chasing. What ensued was a wild 20 minutes of a very confused and frightened alpaca outrunning all of the children and two grown men trying to circle out around the animal in order to herd her back to the farm. Several times she was cornered and Rich thought she would be caught but one child or another would come up on her other side and off she'd go out into the field again. Eventually, the other man and Rich got her into a corner and captured her. She was led back to her inevitable fate.

Meanwhile, back at the barnyard, Brutus had been led from the trailer by myself and one of the 4-H girls who had experience with showing alpacas. He was calmly walking around the yard and sniffing at the Grass Run girls through the fence... 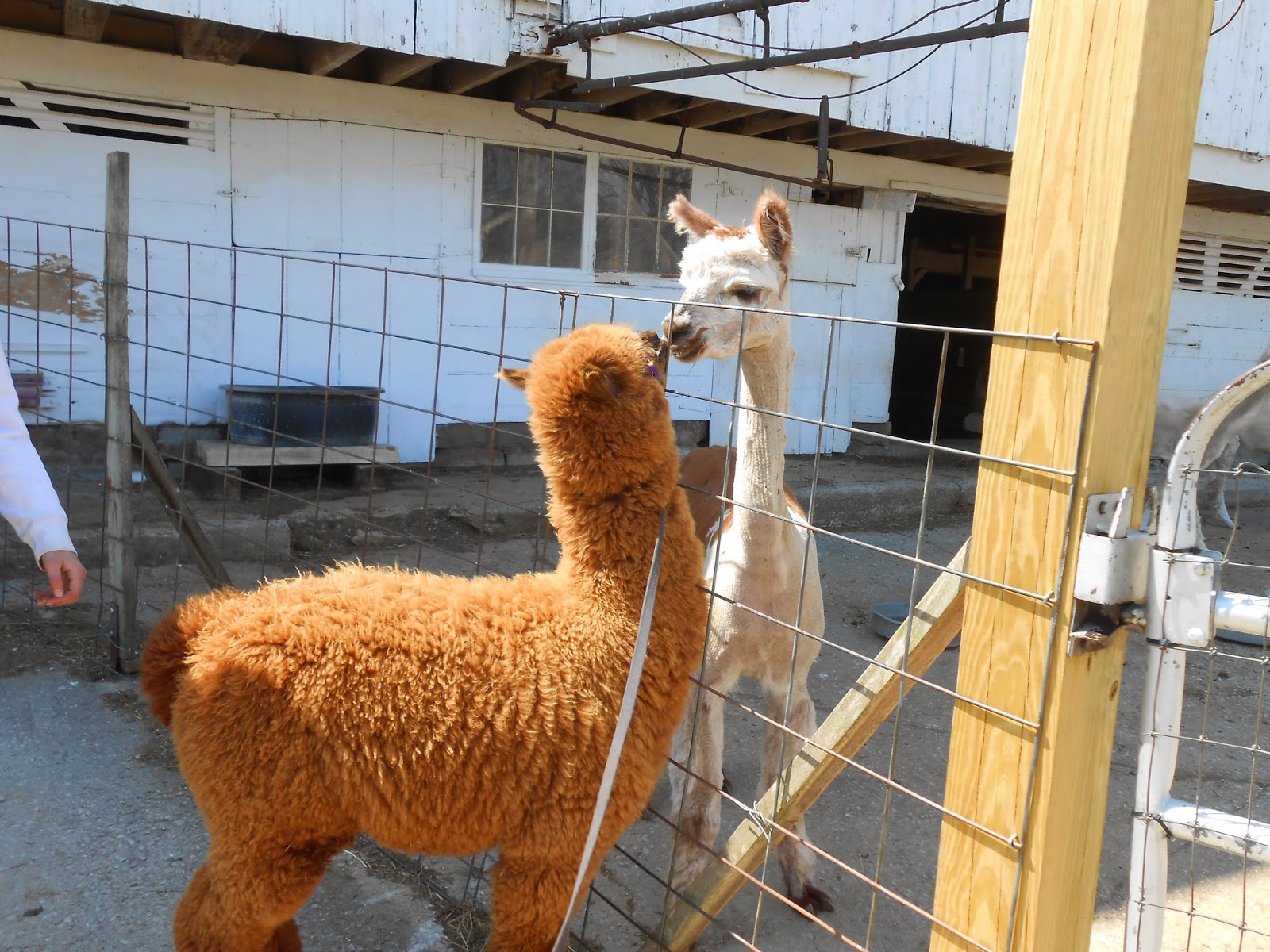 and making a new friend of a 4-H member named Nick. 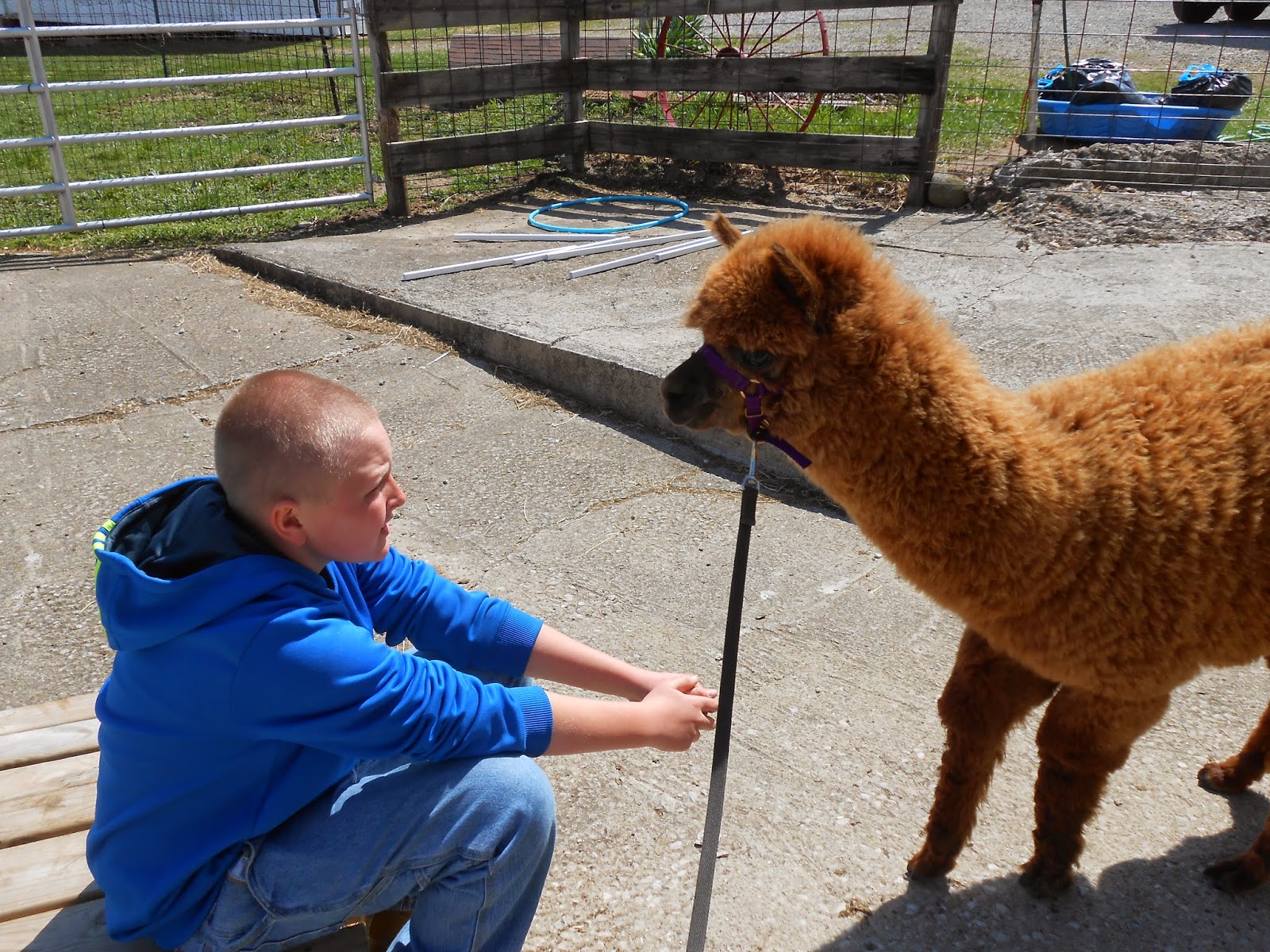 Brutus behaved much the same as Leezza during his time on the table. He lay there calmly during the shearing, surely confused since it was his first time. While he did not spit, his tummy rejected some of what he had eaten before he left home and he "dribbled" a little of its contents out on to the table. As soon as he was finished and released from the table he recovered quickly. 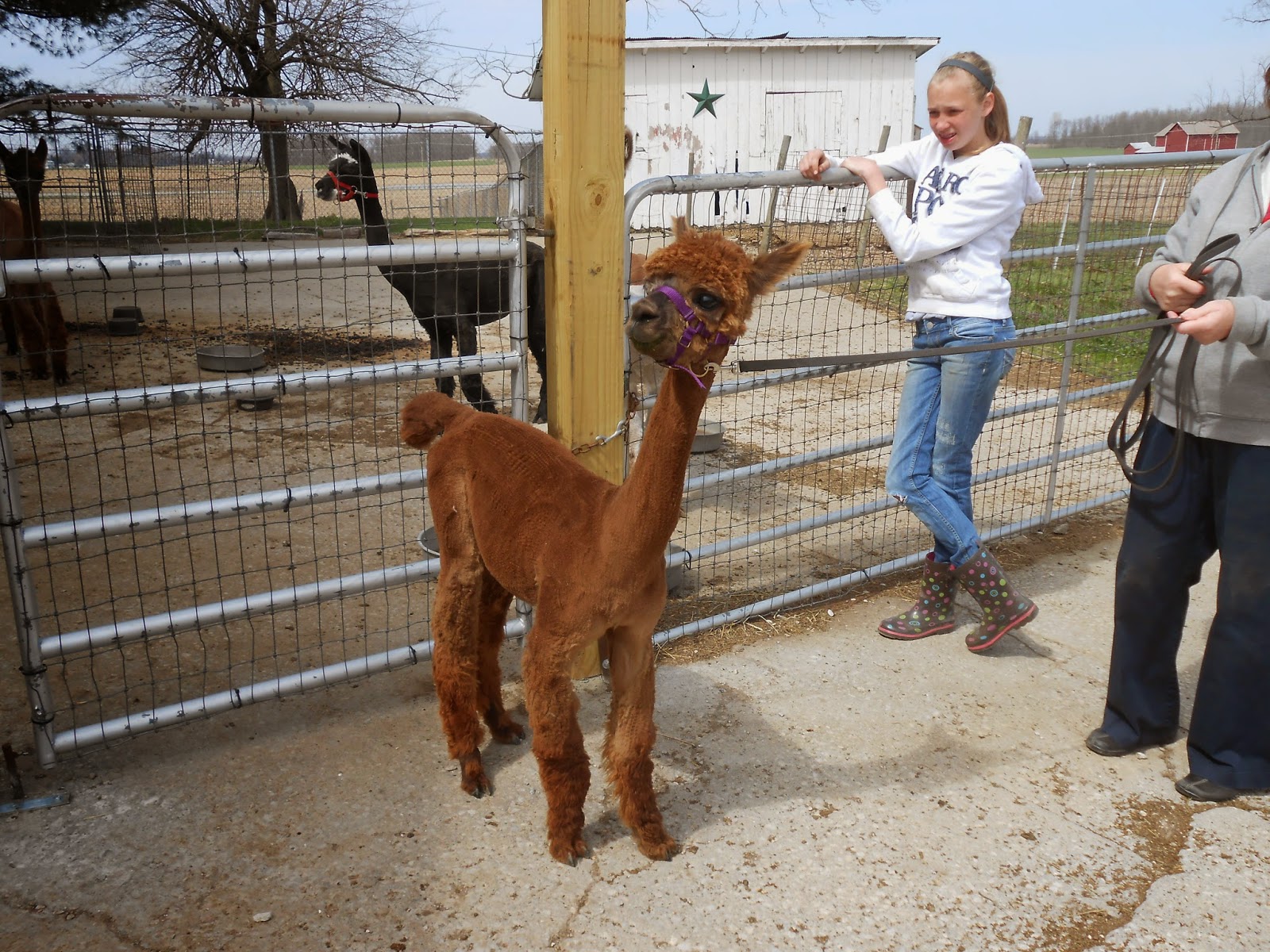 Nikko, like Mango, brayed loudly the whole time he was on the table. Unfortunately, the shearer's clippers quit working early in the process and needed to be tweaked back to life. This meant that Nikko was strapped down longer than usual and continued to protest the whole time. He could not be consoled or cajoled into accepting his fate quietly no matter how hard Rich tried. In the end, Nikko also gave us several pounds of crimpy, dense fleece that has a beautiful luster to it. No wonder he is such a handsome fellow when he is in full fleece! 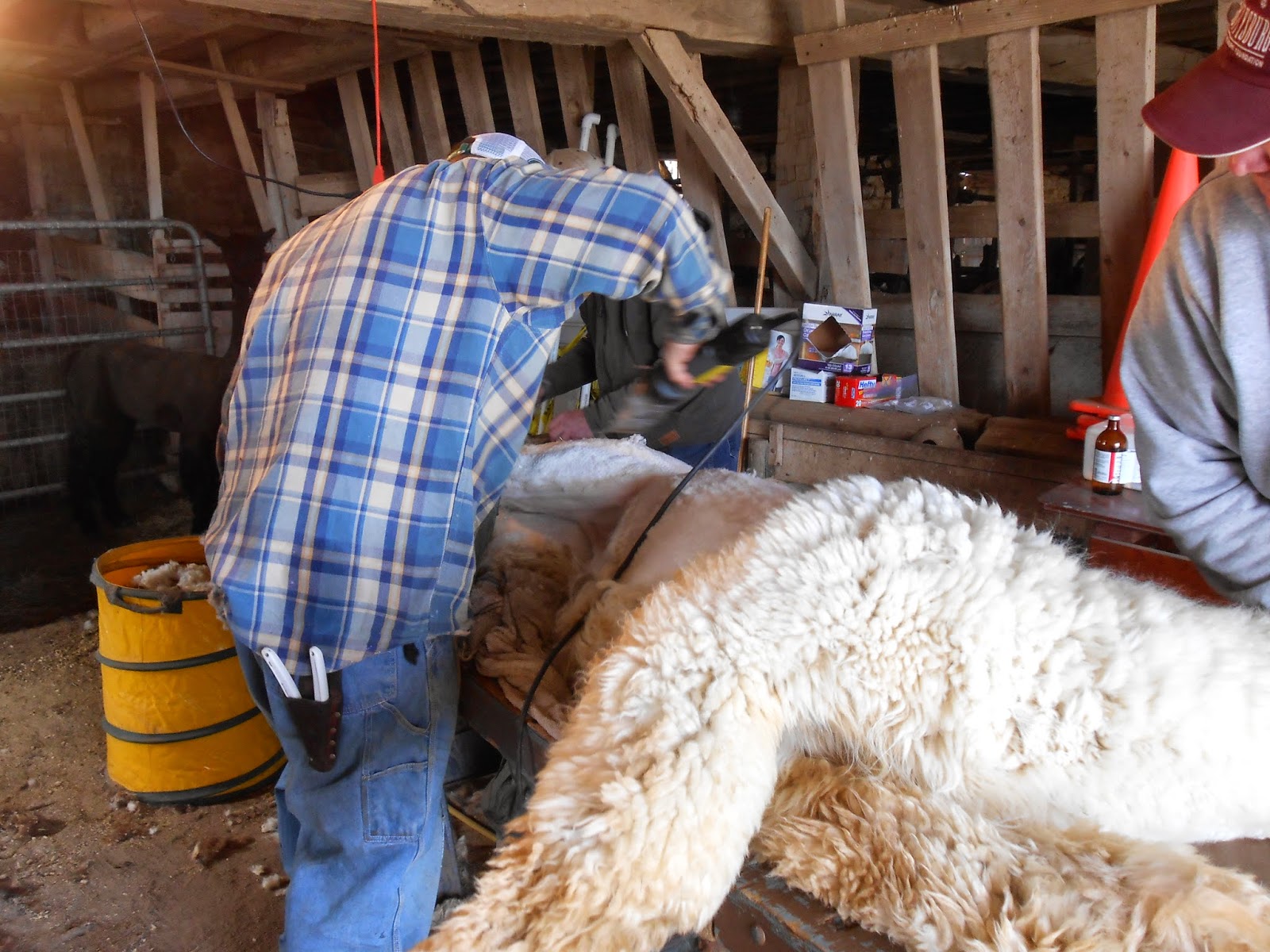 Asterius was our last animal to be shorn. He protested weakly, whining all the way, but didn't struggle like the bigger animals had. Though Rich held him and reassured him calmly that it wouldn't last long and that he would be so much more comfortable this summer, I don't think Asterius was buying it. 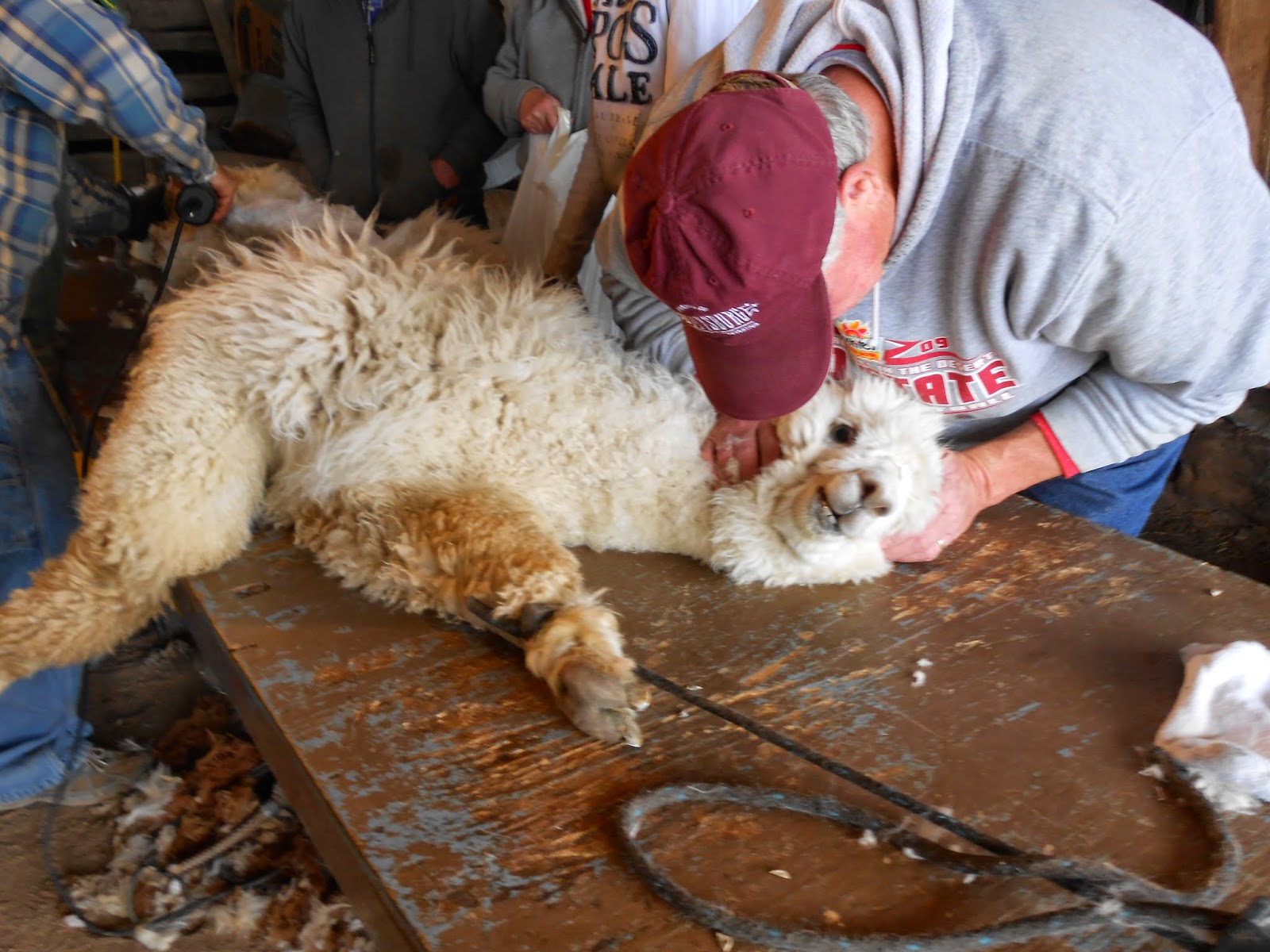 It was over quickly and in the end, Asterius was a much lighter, smaller animal. It's so hard to believe that these are the same fluffy alpacas that have romped in the snow this past winter. They look totally different without their fleece; much smaller and way more vulnerable. 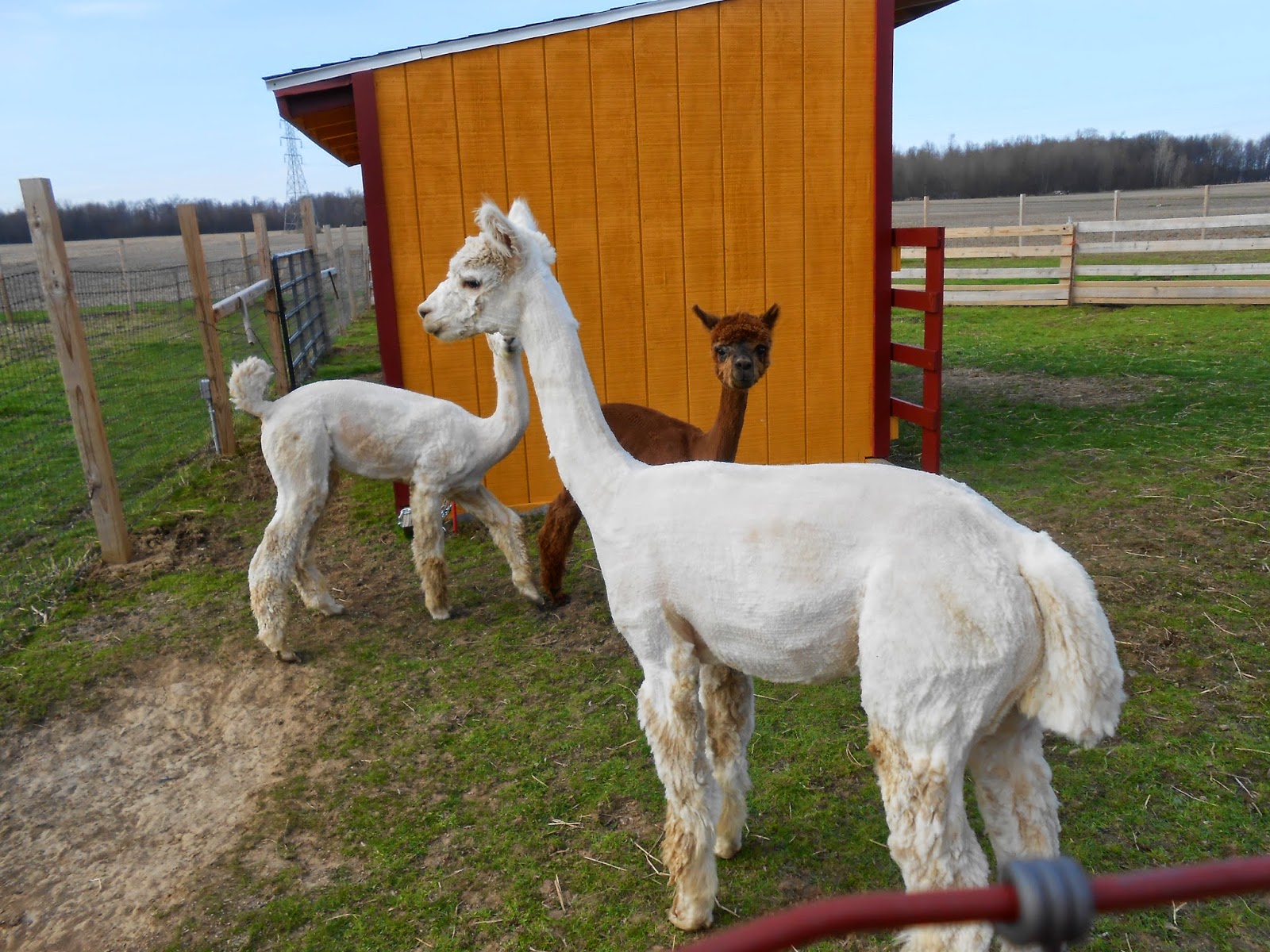 Yesterday the vet came out to do an ultrasound on Leezza  and Mango since they are seven and six months pregnant respectively. Leezza was first and the exterior ultrasound was inconclusive like last year's results on Took and Firenze. On the vet's advice, I decided against the interior procedure and we did not even attempt one on Mango. I assisted as Dr. Bob McClung drew blood from the two little boys so that I could register their DNA with Alpaca Registry. Together we had to remove Brutus and Asterius from the boy pasture and put them into the girl pasture. With the onset of spring and the loss of his fleece, Nikko has suddenly discovered that he is a mature male. He has become so randy that he was jumping on top of, biting and generally bullying the two little boys in an effort to show his dominance. Dr. Bob and I were afraid that he might seriously hurt the little ones. Asterius and Brutus seemed relieved to be back in the safety of the nursery. We'll keep them there until the danger has passed or until they have grown quite a bit so that they can fight back!
Posted by Buckeye Star Alpacas at 5:17 AM