Pressley came out Sunday afternoon for another training session with the alpaca girls. Because of my foot surgery and sickness, Pressley's and mine, it had been a month since we haltered up Leeza and Mango to walk them around the pasture. Rich and Pressley had to capture and halter the little ones since I am still not ambulating freely with my sore foot. Leeza got haltered first and as I held her she slipped partially out of the halter because it was a bit loose. After they finished Mango, Pressley readjusted Leeza's halter.

Mango, once again, surprised us at how easily she adapted to the halter and lead. She always fights a bit more than the others when we try to corner and catch her. But once the halter is firmly in place she willingly walks along side whoever is leading her. Rich and Pressley harnessed Mango and handed her to me while they readjusted Leeza's halter.  Baby Mango is very curious about people and as I was holding the lead she walked right up to me and sniffed at my hand. 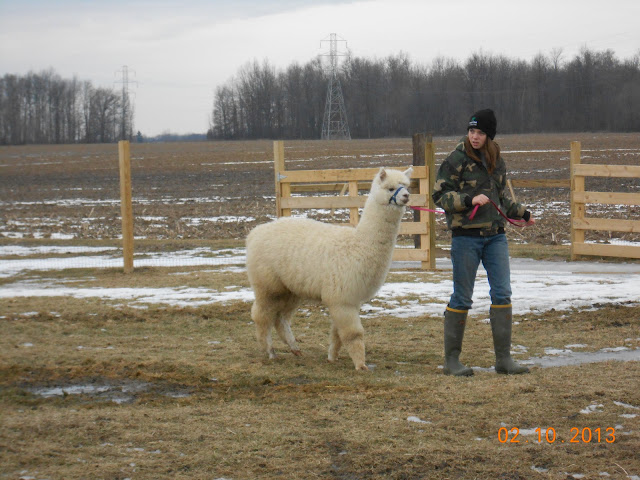 Rich and Pressley led the girls around the muddy pasture and Mango followed beautifully. This is only the second time she has been in a halter and she walks on the lead as if she were a seasoned show animal. I am resisting the urge to boast too much about her accomplishment. She is still growing and maturing and like human children, you never know what they will do next. 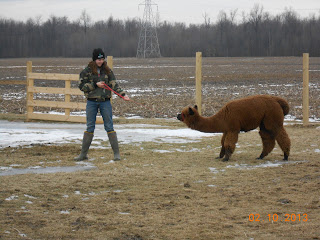 Leeza resisted walking even more than the last training session in January. At one point she just kushed down in the mud and refused to walk. Pressley managed to get her to stand up again and traded animals with Rich. He was able to get Leeza to walk along behind him for a few minutes before he called a halt to the training session. We wanted to make sure that she had walked on the lead before we turned her loose so that she wouldn't get the idea that she could kush and that would be the end of it. She needs to be gently taught that the humans are ultimately in charge and she must cooperate. 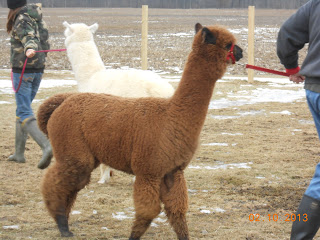