Pressley was out on Saturday afternoon to work with the alpaca girls. It was muddy and so dreary. It seems that she never comes out on a sunny, warm day like yesterday. But then we haven't had many sunny, warm weekend days this winter.  Pressley is a real trooper and not a bit afraid of getting dirty. She is much better than I am at capturing and holding the animals. I just jump in when she has them steadied and put on the halter. My part is really easy. I must admit that I am a little hesitant to charge in and capture Mango since that incident a couple of weeks ago when Rich and I were trying to halter her and she stood (not stepped quickly on and off) on my recently operated on right foot. It didn't really hurt since Mango is under 100 pounds. But I squealed loudly, "She's on my foot! She's on my foot!" because I am still a bit nervous about undoing the mending that the doctor performed. I do not want to go through that again anytime soon. 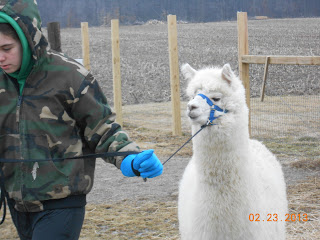 Once again, Mango performed like a seasoned pro. Originally we thought that Pressley might be showing Leezza at the fair this summer. It's a decision that we may probably reconsider since Mango seems to really like Pressley and being led around by her. Leeza did ever so much better this week, though. We purchased a much longer lead and Leezza does better when she is some distance behind us. I walked her and gradually shortened the lead until she was a bit closer to me. When she realized how near she was she began to hesitate. I let the lead out a bit and she walked again. I think eventually she will cooperate on a reliable basis. 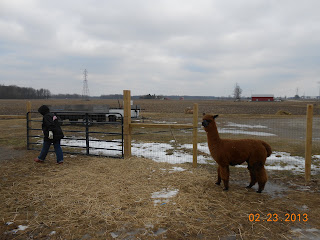