Rich and I went out early this morning at about sunup to feed the girls, as usual. In spite of my usual pre-coffee brain fog I remembered to take the camera with me this time. They head toward the barn as soon as they hear us slide the door open and when Rich taps the side of the galvanized bucket that he has measured out for feed they come running. He distributed the feed to the four bins and I moved deeper into the back of the stable with the camera. The girls refused to come all the way in as long as Callie dog was loitering outside the stable gate so Rich took her inside the shop with him when he went in to fire up the old wood stove. The alpaca girls rushed in and glanced at me then began hungrily gobbling up their food, only pausing to lift their heads up to swallow, quickly glance my way and return to their feed bins. I snapped a few dozen pictures trying to get just one with all of their heads down in the bin. Here are the two best snaps. 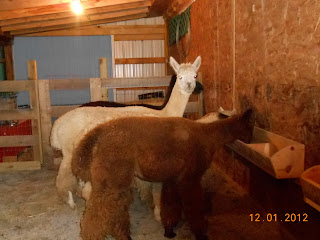 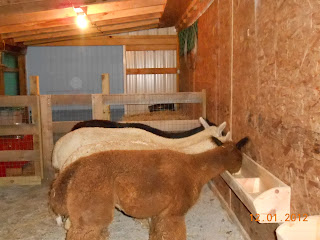 It was such a beautiful day for December; sunny and 55 degrees outside with a slight breeze. Because of this we were feeling optimistic and decided to try putting a halter on one of the girls. I put the largest of our halters in one pocket and the old pink dog lead in the other and headed out to the catch pen. I loosened the gate and closed it about 3/4 of the way and then went inside. Rich brought out a generous handful of sweet feed and put it into the feed pan in the pen and he then waited just outside the gate. Sure enough, all four girls came running. They love the sweet feed and associate it with the red feed pan or an outstretched hand. Rich pulled the gate shut with himself on the inside. When the girls discovered that we were all closed in they were only momentarily taken aback. They finished the treat in the feed pan and stood looking at us as if to say, "What next?" Rich put his arms around Firenze's neck and held her while I put the harness over her nose and fastened it behind her head. I snapped on the lead, handed it to Rich and opened the gate. Took, Mango and Leeza rushed out but Firenze stood patiently waiting for Rich to lead. When he walked out she followed calmly, without  any resistance as he led her around the pasture. When it was my turn, she followed just as patiently as I led her around the pasture. 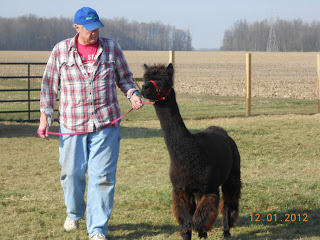 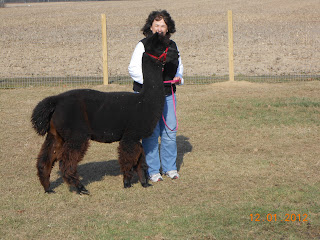 Firenze is such a wise, patient and beautiful animal. She has only been here for a week and has settled in quite comfortably. It's as if she has lived here much longer. They whole dynamics of the herd has changed and even Leeza seems happier now that she has an "older wiser woman" to guide her. All four of the girls will now come up to us and eat out of our hand. Also, they all will approach any visitors at the fence now. Success feels good and so does having their trust. 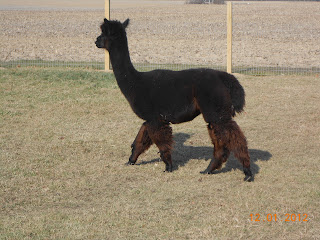