For the past two days I have been so busy after school that I have been late getting home and therefore have not been able to spend much time outside with the alpaca girls. I am really missing that unwinding time that I spend with them each evening. Last night, after dinner, I did go out to the stable briefly to feed them the extra helping of sweet feed that the vet recommended. We did a body score on all of them Sunday (more about that later) and found that Firenze is a bit under weight and Took, also pregnant at the same time she is sporadically nursing Mango, could use a little extra nutrition. I scooped up a generous helping of the feed into a large, red, plastic feed scoop and stepped into the stable enclosure. As soon as the girls heard me snap the top off the plastic feed bin they rushed into the stable area. When I stepped through the gate and turned around Firenze was right there at my shoulder waiting with the other three close behind. I took a handful of feed out of the scoop and held it to my left as I held the scoop to the right of me. Firenze zeroed in on the largest portion in the scoop and the other three jostled for the handful on the left. The most amazing thing is that Leeza, who was the timid one before Firenze arrived, pushed in ahead of Took and Mango and helped herself to the feed in my left hand. Eventually I had to shoulder Leeza out of the way so that I could give Took the extra handful. This is the first time that I have had all four of the girls crowding in close to me to get their snack! 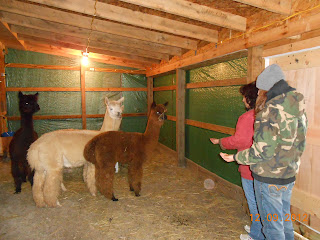 Sunday afternoon, one of my students who is also a 4-H member, came out to visit and become familiar with the alpacas. She would like to show one of them at the fair next summer as her project so I invited her to come out and begin to work with them. We felt that it was time for the recommended periodic body score. This involves corraling them into one place, in this case the stable, and one of us holds them steady while the other runs their hands over the animal's back to check for muscle mass alongside their spine and all down the back. My student, Rich, and myself herded the girls into the corner of the stable behind the hay rack. Rich grabbed Took around the neck and the 4-H'er and I felt down the length of her back. But baby Mango surprised all three of us when she did a standing leap over the 3' tall hay rack and out of the corner into the open space! She wasn't going to hang around and be pawed over by any humans. We finished off the body scoring with Leeza and Firenze then decided to halter Leeza and work a bit on leading her around with a leash. With a little hesitation at first, Leeza cooperated and we had a successful training session for both girl and animal! 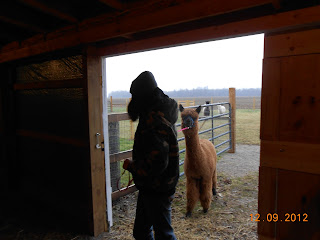