Where's The Camera When You Need It?

I rose early this Sunday morning since Rich and I had planned a quick trip to Columbus to take our grandson, Max, to see the new Lincoln movie. (Which was long but very good.) I went outside at sun up to feed the alpaca girls and they must have been hungry for their daily dose of supplemental feed because they were waiting for me just outside the door of their barn. I scooped out a bucketful of their feed and a handful of sweetfeed that I always use to tempt them to come near enough to eat out of my hand. So far no results in that endeavor. They kept their distance a few feet outside of the barn's open door as I entered from the inside gate. I turned my back on them to fill their trough and peeked over my shoulder to see three fuzzy heads peering through the door! Instead of leaving, I strolled slowly to the back of the enclosure to check the water bucket and the hay bin. I turned around and to my surprise all three of the girls were at the trough feeding! I sat down on the edge of the hay bin with my handful of sweetfeed open by my side, talking and humming to them all the while. Took and Leeza pretty much ignored me and kept on eating. Baby Mango, on the other hand, took several steps in my direction looking inquisitively at me. She seemed to know that I had a handful of her favorite treat and I could tell that she really wanted it. I wish I could say that she overcame her shyness this time and helped herself but she didn't. However, I am sure that one day she will be the first one to overcome her fear and try to eat out of my hand if I can just be patient enough.

It is deer hunting season in Ohio now and this weekend was the youth hunting weekend before the regular season opens. So early this morning the group who hunt the woods out back were in place long before dawn. As our girls were eating I was glancing out the big barn door towards the woods. As I watched five deer trotted across the field heading towards my brother-in-law's house. Smart deer. Hunters cannot shoot towards houses and other buildings. At that distance there is no way one could hear the deer but amazingly enough, Took seemed to sense their presence. She raised her head from the trough and perked those big ears up. Leeza also became alert. Both ran outside to the side of the fence toward the deer followed by baby Mango. How did they know? Is it the smell? Can they actually hear at that distance? I have no doubt that they could see the deer with those wide, black, inquisitive eyes of theirs. All three remained there alert with their heads raised and ears perked up until the deer were no longer visible. Amazing. All this action and I had forgotten to bring my camera out with me. 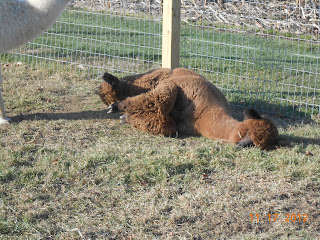 Leeza needed a good back scratching! 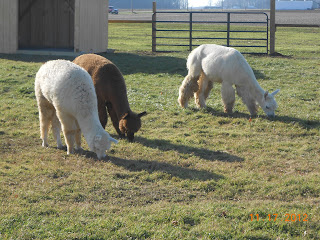 Mango is as big as Leeza now!
Posted by Buckeye Star Alpacas at 2:44 PM