Rich finished a three-sided shelter for the pasture this afternoon and dragged it into the pasture. We both figured the alpaca girls would be afraid of the old tractor and a moving building. Quite the contrary. All three of them stood gawking as he moved the building across the pasture only moving slightly out of the way as he passed by. After he jockeyed the building into place and unchained it he chugged out of the pasture on the tractor. Before I could even get the gate closed behind him the girls were circling the building and sniffing at the new resident. When they were satisfied that it wasn't alive they started frolicking around and around it. Leeza and Mango, the kids, were leading the way but even mama Took made a few leaps along behind them before she settled back down to grazing. It was quite a sight to see the young ones playing happily like that. 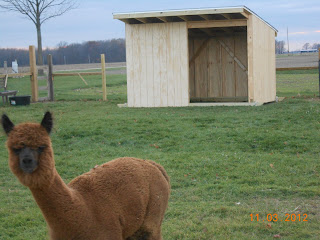 I went  back out with my cup of tea and camera just a few minutes ago to check on the girls and tell them good night before the sun went down. As usual Mango was the first one to come up and greet me. She didn't spend much time talking with me tonight. The reason soon became obvious. She trotted back to mama Took and nuzzled her head down under looking to nurse a bit. I normally only see her trying to nurse during the day and usually Took just walks away from her as if she is trying to wean her own baby. But this morning just after sun up I looked out and Mango was nursing heartily while Took stood patiently and let her have her fill. Then this evening Took once again stood patiently while Mango had her bedtime snack. 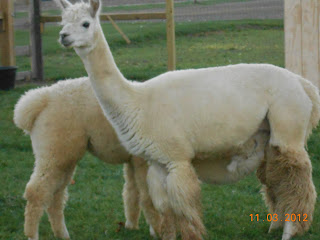