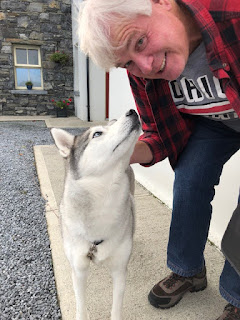 Doolin, a small, mostly tourist, village near the Cliffs of Moher and about an hour's drive from Shannon Airport was our first scheduled stop over in Ireland. We arrived there well before check in time at our b&b so we drove around the area a bit just to check things out. Since we traveled in September the tourist trade was very light and the streets not very crowded so our first impression was of a charming, picturesque Irish village. Rich, still becoming accustomed to the differences in driving, decided to venture out of town for a look around the countryside. We decided to stop for a mid-afternoon snack at a charming looking little tea room, The Stone Cutter's Kitchen, where I had my first taste of tea and scones, and the famous Irish hospitality. The somewhat rickety, mismatched tables and chairs only added to the authenticity of the little cafe. Our server was a lovely young woman who spent quite a bit of time chatting with us. She seemed surprised when we remarked on the narrow road and informed us that it was one of the larger highways in Ireland!

Fortified, we drove back to Doolin for check in at our b&b, Cois na hAbhann (Cush nah Own, by the river) where were met by a friendly, blue eyed husky named Mishka.  Our host, Brian, came out to the parking lot to greet us and help carry in our bags.  He led us down a short hall way to our room at the back of the house. We found it to be a comfortable,  light and airy room with views of the hilltop where contented cows were grazing and a small, stone wall encircled lot at the side. Brian showed us the breakfast room and pointed out the tea and coffee station that was available 24-7 and Dimpna, his wife, came out from the kitchen to welcome us. After a few minutes of easy conversation they both felt like old friends that we hadn't seen for a bit.

Since it was a beautiful, sunny day and we had time before dinner, Brian advised us to go see the nearby Cliffs of Moher. So our  first real touristy excursion was to the famous Cliffs of Moher and as I mentioned earlier, as we traveled in the off-season, it wasn't at all crowded. It was, however, an exceptionally windy day and we chose to walk up the more civilized paved stairway on the shoreline facing the cliffs instead of hiking the path over the cliffs themselves. We had heard so many stories of tourists who got blown off the cliffs by strong gusts on windy days. It was a wise choice. Rich, who is more firmly anchored to this earth than I, walked all the way to the top. I chose to stop half way, sheltered by a shoulder-high stone wall, since some of the gusts had caught me by surprise and sent me off balance. The Cliffs of Moher were still an awesome sight from afar.

Once again, overlooking the cliffs, cows appeared to be clinging to the rocky hills! 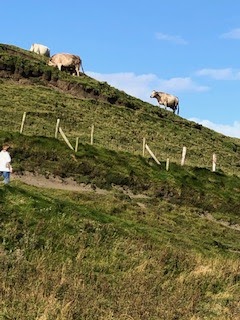 Once again, overlooking the cliffs, cows appeared to be clinging to the rocky hills!

After our long flight, drive from the airport and hike up to the cliffs, we settled in for a short snooze before dinner, pulling the curtains on the daylight. When we woke up very hungry two hours later to the sound of gentle rain on our window and pulled back the curtains we found that the "vacant" lot outside our window wasn't as empty as it had been upon our arrival. The cows had began coming down off the hill and into the small pasture for the evening and this is what I saw when I pulled back the curtain.

Brian had recommended Fitzpatrick's pub which was a short walk next door across an intersection on the corner. Like most of the pubs we found that there was music every night from about 6 or 7 pm. This first night a musician named Jimmy, played traditional Irish music on the guitar with an occasional classic rock, i.e. James Taylor, thrown in. Fitz's, as Brian affectionately called it, was cozy, dark wood paneled bar with an open fireplace. The first evening we sat at a table for delicious dinner of traditional Irish fish and chips. Rich ordered this quite often on our trip with the aim of rating the "Best Fish and Chips" in Ireland. I, on the other hand, decided right away to order a variety of seafood and other traditional Irish dishes. The seafood all along The Wild Atlantic Way was, of course, fresh and very delicious. I had my first full pint of Guinness that evening and decided that I would take the half-pint option from then on. Maybe it was the fact that I was hungry and still jet-lagged tired or maybe it was the unaccustomed alcohol content, but the Guinness went straight to my head and made me quite giggly! 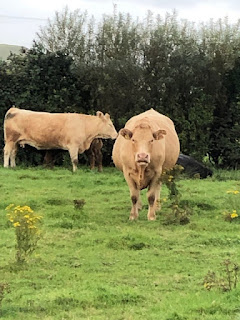 After a welcome and very comfortable night's sleep we woke up to a sunny morning and this critter staring in the window! All of the cows had wandered down to the pasture and quite a few of them were nursing their calves. Brian told me at breakfast that he had, "paid a premium" for that feature! Dymna prepared a traditional Irish breakfast for us, eggs, bacon, sausages, grilled tomato and blood sausage. Very delicious except for the blood sausage for which neither Rich nor I developed the palate.

We headed out to The Burren, 96 to 135 square miles, depending upon your sources, of glacial karst, exposed limestone. While 96 miles of limestone doesn't sound very exciting it was absolutely fascinating and probably one of my favorite places to visit in Ireland. This area borders the Wild Atlantic Way and is designated a national park of sorts. The first stop along the way was on my list of absolute must sees.

Poulnabrone dolman, portal tomb, is the oldest recorded megalithic burial site in Ireland and the second largest of its kind. It's so difficult to describe the feeling that came over me as I stood before a man-made object that had been built over 6,000 years ago in such a desolate looking area. Mystical, magic, awed, speechless. I stood before it marveling first that humans could have eked out an existence on this rocky landscape let alone dig a grave where over 33 remains were found, one an infant, along with the everyday items for use in the afterlife that were buried with them. I could have stayed all day pondering the resilience of these ancient human beings.

At breakfast Brian had recommended that we stop at The Burren Perfumery, a small perfume and cosmetic shop located deep in the Burren. So we headed that direction from the portal tomb. Following the directions on the SatNav since we would never have found it by chance, we wound our way through multiple unmarked by-ways, each one narrower than the next, until we arrived at this amazing fairy tale shop. 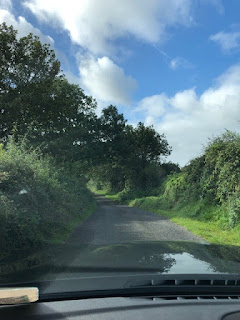 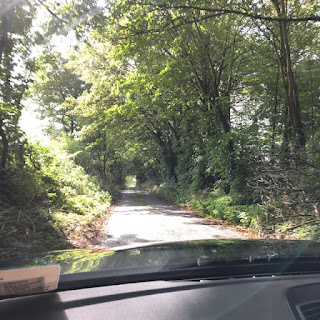 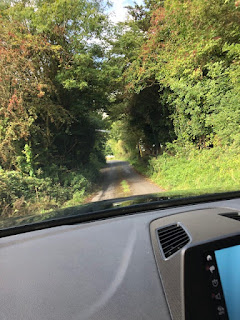 I found The Burren Perfurmery to be such a fascinating place with the neat little sales room, the tea shop and the actual work room/lab, that I could have stayed there all day; lived there even. The women of the Perfumery create organic cosmetics and scents using the naturally occurring flora and fauna of The Burren added to organic base materials like anise seed oil, glycerin and macadamia oil. Visitors could actually peek into the lab and watch the creation of these wonderful products. I purchased several soaps and lotions while there and when I got home I ordered more online. Rich enjoyed the products of the bakery and tea room more so than the shop! 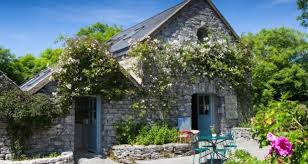 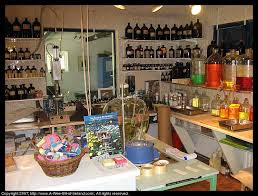 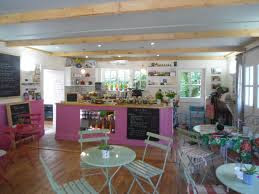 As our day on The Burren came to an end we headed back into Doolin. On the drive back we discovered this ruin of an old manor house with no signs or markings at all. But for the locator on our iPhones we would never have known that it was Leahmanah Castle, a 17th century mansion with a 15th century tower house near Kilfenora. All over Ireland we saw so many unmarked ruins that were obviously as old or older than this one. Had we stopped to snap pictures and research each one we would still be in Ireland. Not such a bad thought, really. 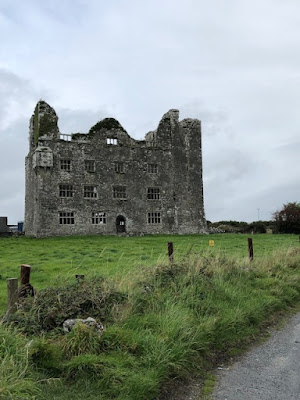 From here we drove back to Cois n hAbhann and a short rest before dinner at Ivy Cottage in Doolin and more "trad" music and drinks and conversation at the bar in "Fitzy's." After a second night at the delightful Cois n hAbhann we would be heading on to Dingle where Funghi awaited.

Posted by Buckeye Star Alpacas at 4:31 AM