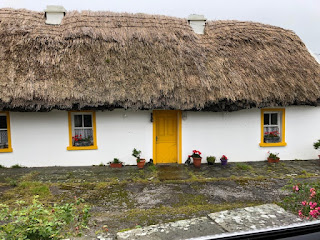 I can't believe that it's been over two months since Rich and I took our big vacation to Ireland. And yet, here we are preparing for the holidays. It took me the whole first month, working an hour here and an hour or two there, to transfer and organize all of our photographs. Rich and I each took so many on our phones that I had to sort and delete and sort some more. The picture of the thatched cottage by the shore is one that seems iconic to me. Even though most of the small homes along the coastline are newer versions, this one looked to me like something one sees in those old movies like The Quiet Man.  Everywhere we went was so picturesque and lovely that it was deserving of our photography.

We flew into Shannon airport, much smaller than Dublin, where we'd been advised by our AAA agent that it would be easier to drive out of and get to our first destination, Doolin in County Clare near the cliffs of Moher. Considering that in Ireland they drive on the left we decided that might be the more prudent option. I do have one or two bits of advice for anyone looking to plan a trip to Ireland. After the long flight from Newark airport we were understandably tired and just wanted to get the smaller car that we had reserved and get on the road to our destination an hour or so away. When Rich queued up to get the car he told the agent that we had reserved a mid-sized, standard shift car with GPS (SatNav in Ireland), $12/day extra. "For just $25 per day more we could have a BMW that came equipped with SatNav and automatic steering." Without a second thought Rich agreed. (Keep in mind, we were both exhausted and excited to be on the road.) 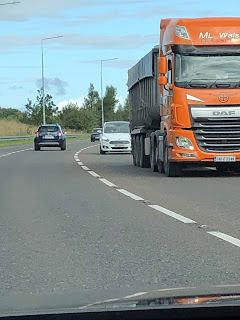 Coming out of the airport and on to the main highway was fairly easy as the main highway was four lanes wide and well marked albeit a bit narrower than our four lane roads. It was startling to see large semis and tour buses coming towards us on the "wrong" side of the road but Rich, who did the driving, quickly got used to it. Great! Then the SatNav told us to exit at an upcoming route. No problem finding that, but here's where the rude awakening occurred. What was a regional highway there was more like the country road we live on! Except, and this is a big exception, there were no berms or easements on either side of the road. There were tall, dense hedges sometimes with very solid stone walls embedded in them creating a maze-like effect. But, because it was considered a main route there were still tour buses and semis coming at us, as well as cars. 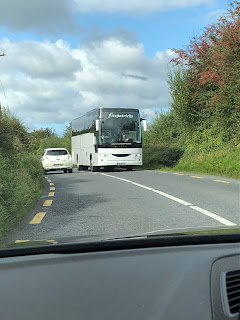 The back roads that often led to some of our destinations were often only one lane with the same hedges and stone walls on either side. On those roads we encountered the same traffic but with the addition of farm vehicles hauling wagon loads of hay and such. On those roads someone had to back up to the nearest driveway or intersection in order the oncoming traffic to pass. As far as we could tell there is no set etiquette rule for who should back up but those tour bus drivers are pretty aggressive and that huge bus windshield means that the driver's expression and gestures are highly visible. I'll give you one guess as to who was going to back up.

Don't even get me started on the round-a-bouts, confusing enough in the states but more so when you have to remember to "look right and go left," a phrase Rich heard all too often from the passenger seat!  I also learned that the "Traffic Calming" signs did not mean that drivers were very chill. No, far from it. It only meant that traffic was slowing down ahead, usually for a school zone or something similar. After the first two days of driving, Rich politely informed my that my constant loud gasping wasn't helping much. Good news though, we're not planning a divorce any time in the future. 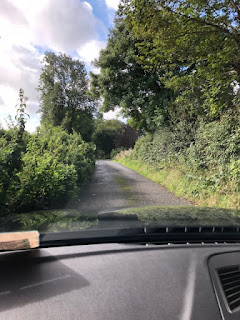 So my bits of advice for car rental and driving in Ireland:
1. Don't let the car rental agency talk you into a larger car!!!!!
2. Be sure to get a GPS (SatNav) and automatic steering if possible
3. Speed limit signs are big white disks with a red border and are in KPH; the speedometer on the car was in both KPH and MPH so be sure to look at the right one or you'll be going too fast!
4. Save change for tolls.
5. At the Round-abouts look right, go left.
6. Driving in Kinsale is not for the faint of heart. More about that in a later post.
Posted by Buckeye Star Alpacas at 6:42 AM