Prom and graduation season always makes me a little nostalgic. This feeling came on when my first daughter, Amy, graduated from high school and has happened every May since then. I used to sit on my front porch on the evening of graduation (when I didn't have one that I had to attend) sipping wine while I waited for the joyful cacophony of honking car horns as soon as the ceremony was over. It's what they do in a small town. This year the motivation behind my nostalgia is two-fold; my first granddaughter, Olivia, will be graduating from high school and I will be attending my 50th class reunion! I look forward to attending Olivia's graduation. I'll cry. I'm not sure how I'll feel when I attend my class reunion.

Both Olivia and her freshman brother, Max, attended prom this year. (One of his track teammate's girlfriend's, best friend, needed a date.) Seeing both of my older grandchildren dressed in formal wear brought tears to my eyes. I thought my own daughters grew up too fast, but grand kids? It's almost inconceivable that the two little redheaded toddlers are going to high school. 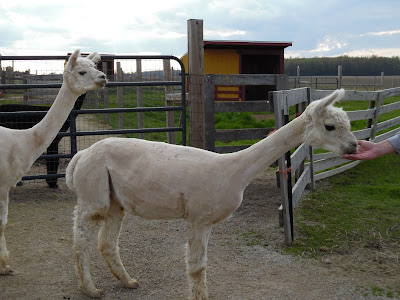 Took may be a bit overweight but not nearly what I had expected before shearing. That's her daughter, Mango, in the background.

Our two little boys, Mocha, and his half-brother, Dionysus, were the biggest surprise. They looked huge before shearing. Mocha was Mango's cria out of Black Night (Myron's sire) and Dionysus was last year's cria out of our sire, Nikko. They were born almost exactly a year apart. They looked like this before: 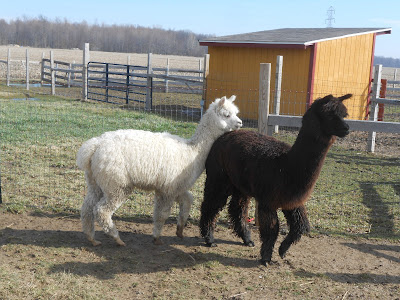 Now that the weather has gotten warmer and the grass is growing, these two almost never stand still long enough to get a good closeup shot. The minute I show up near the pasture with my camera they stop grazing and start putting on a show; kicking up their heels, chest bumping and running back and forth in an effort to impress. If I'm lucky and creep quietly out onto the back with my camera ready, I can catch them as they look up from their grazing. So this is the best I can do to show you the "after" picture: 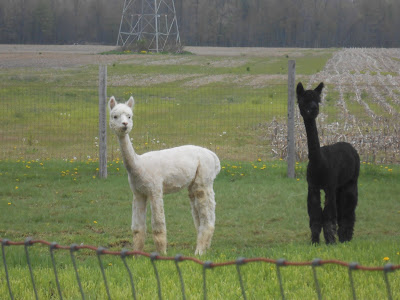 While we were shearing I gave a call to our vet and ask that he come out to help with two necessary tasks. The first was sad to say the least. I'm sorry to have to report that our herd sire, Nikko, a beautiful animal, had to be put down. He had been becoming more and more aggressive in recent months.

It all started last fall when he tried to jump on me. Fortunately, Rich was in the pasture with me and caught him before any real damage was done. Another time he tried it with Rich and was held off. Mocha, who is about 18 months old, is beginning to get his male hormones. This means that when he was near Nikko he often rolled up his tail, an impudent action that males do to assert their masculinity. Nikko often became agitated and aggressively jumped on the fence trying to get at Mocha.

The last straw was when Nikko rammed the gate that separated their pastures, broke the latch and got in with the little boys. Fortunately it happened on a Saturday when Rich was home from work. He heard Mocha's screeching and by the time he got to the pasture, Nikko had Mocha by the neck. When Rich, perhaps a bit recklessly, jumped in between to separate them, Nikko bit him on the neck. Between the two of us we managed to get a halter and lead on Nikko and Rich dragged him back into his own pasture where we secured the gate. From that point on I worried whenever Rich had to go into the pasture to refresh his hay and water.

We still agonized  for the next couple of weeks about whether to put him down or not. The night before shearing, Rich and Brian, our neighbor tried to put a harness on Nikko in preparation for locking him inside so his fleece wouldn't get wet in the rain that was predicted. Rich and Brian are both tall guys and they still had trouble handling Nikko. That's when we knew that he wouldn't get any better and we just couldn't have a violent animal on the farm. So, sadly, the next afternoon, after he was shorn of his gorgeous, soft fleece, Nikko had to be put down. We buried him out under the old oak tree where the sawmill used to stand. 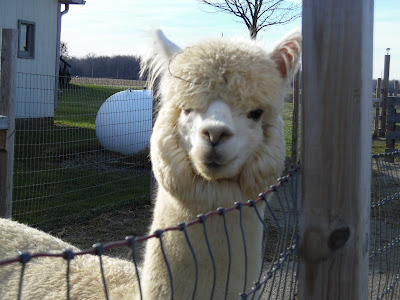 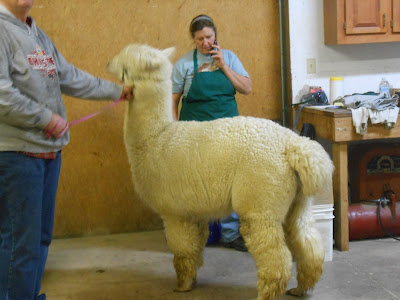 The second task that we had for Bob, our vet, was a much happier one. We have been trying to breed our beautiful brown Leezza ever since we got her with no success. She came to us with a free breed back to one of the herd sires at Amy J's Homestead Alpacas and though they tried several times it just didn't take. The next year we tried to breed her to Nikko. It appeared that she had been successfully bred because she passed the "spit" test  (see entry for October 24, 2013 for explanation) which is said to be about 80% effective. We waited 11 months and nothing. If she had been pregnant she must have either absorbed or aborted a microscopic fetus.

So we tried again with Nikko last fall. She passed that spit test twice. We didn't know whether to be hopeful or not so we waited. When we attempted to clip her toenails one day last winter, the usually biddable Leezza, was a bit testy. She let us do her front nails and then decided that she'd had enough and began bucking and dancing away from us. When Mango was pregnant the first time, her usually laid back nature disappeared and she became a "touch me not" and a bit grumpy, much like some human pregnant women do. When Leezza started exhibiting this behavior we decided that if she was still ouchy in the spring then we would have a blood test done. Dr. Bob called the other day with the best news ever. He is 90% sure that Leezza is pregnant. So now we wait until October with our fingers crossed.

Now we can relax until October when we hope all three females will each be delivering a new addition to the herd. There's nothing like watching those new crias pronking around the pasture. It's joy set in motion and one of those everyday things that just make you smile.