And They Say That April is the Cruelest Month!

Less than two weeks ago when Rich took down the winter snowman display and put up the Leprechaun and Pot 'O Gold, it looked like this: 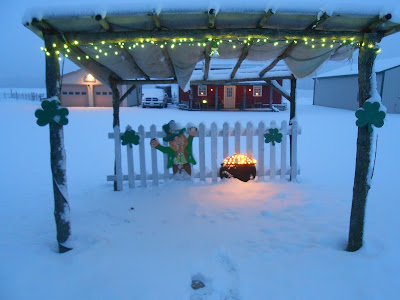 I had to clear away the snow to snap pictures of my sprouted chives in the herb garden and the daffodils out by the front fence. 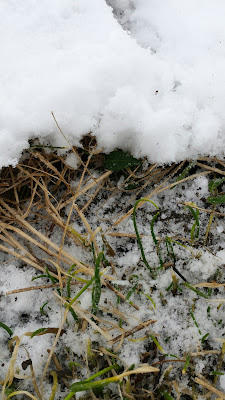 Callie insisted on going  outside to play ball in the snow but every time I tossed it she returned with a frosty ball full of snow. It's usually difficult to get her to drop the ball for another round but not that day. Even she didn't want to hang on to it very long, dropping it when she returned to me and champing her teeth repeatedly. She must have been feeling the cold on sensitive teeth. 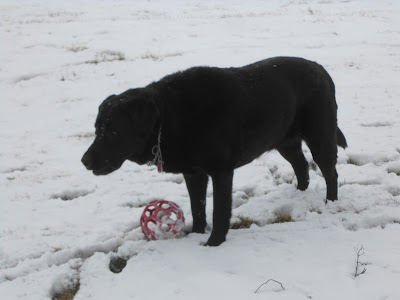 Within a couple of days the snow was gone and the Mocha and Dio were feeling frisky with the milder temperatures, longer daylight hours and the promise of spring. I caught them chest bumping and neck wrestling in the pasture on one of the warmer days after the snow melt. 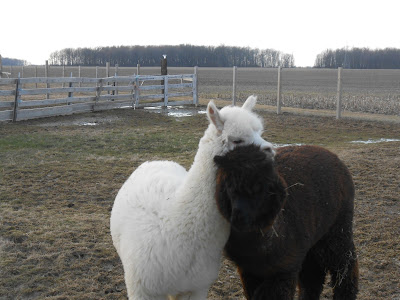 Little Dionysus, the younger of the two half-brothers, is usually the instigator of the play time, with Mocha man being the patient older brother for only a limited amount of time. Mocha puts up with the neck wrestling and chest bumping. Dio gets really fired up with this rough housing and eventually does a speedy circuit of the pasture and finished by jumping onto Mocha's haunches. This is where Mocha draws the line and twists that long neck of his around and accurately lands a wad of spit in Dio's face. The little guy backs off and runs for mama, Mango, 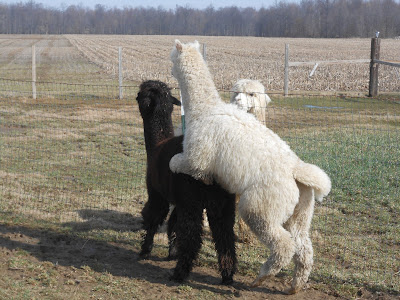 This past month as Dio neared the six month of his short life we noticed that Mango had been pushing him away most of the time when he attempted to nurse. Saturday was such a lovely day that Rich and I decided to move the two little boys to a pasture of their own to complete the weaning process. Both of the boys seemed a little befuddled when they first entered their new pasture and eventually began exploring the newly sprouted grass. Rich had put some sweet feed in the trough of their new condo and it didn't take long for them to discover it. 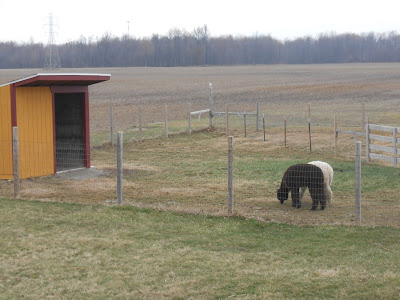 For some reason their transfer seemed to really upset Nikko who ran up and down their common fence line making peculiar agitated noises. Whenever the little guys got near their gate Nikko poked his head between the slats attempting to bite at them. They have always had a common fence line when they were in with their mama, Mango and Nikko did not behave like this. Nikko kept getting more and more worked up and his ire seemed to be aimed at Mocha who is nearing two years of age. Mocha is clearly beginning to feel his hormones since he often does that tail roll up thing when Nikko is near the fence so I can only assume that what happened next is because Nikko feels that his place as king of the herd needs to be defended.

Nikko had been continually ramming the gate trying to reach the little boys when they were near and eventually pulled the latch chain right out of the wooden slat where it had been anchored. He chased the little boys up the runway and cornered them where he began jumping on Mocha and fiercely biting his neck.

I was inside and heard Rich calling my name and alternately yelling, "No!" When I slipped on my shoes and ran outside I saw that the empty pasture and immediately realized what had happened. As I rounded the barn I grabbed a slat off the wood pile and ran into the girls' pasture. Rich was holding Nikko around the neck with his front legs off the ground but the two little boys wouldn't go back to their own pasture. This was one of the times when I think that these animals, as cute as they may be, are as dumb as a box of rocks. Even though Nikko had attacked Mocha, once Rich had pulled him free, Mocha and Dio stayed right in the middle of the fray!

I grabbed a halter and lead and eventually Rich and I got Nikko haltered up and pulled back into his own pasture. Rich held him there while I secured the little guys in the runway. Nikko is now in the pasture right behind the house and isolated from the rest of the herd. In this whole process, Nikko somehow bit Rich in the neck which was a little scary. In theory, humans should never get between two fighting males because the human will never come out unscathed. In actual practice, when one sees a mature male hurting an immature eighteen month-old if we don't intervene the outcome for the younger male will likely be dire.

Now we have some decisions to make since Nikko has shown some aggressive tendencies toward me in the past and I won't go into the pasture with him. After this latest episode we need to discuss our next course of action with the vet and other more experienced alpaca owners. Nikko may need some "alterations" in order for us to be able to keep him. He's a beautiful animal and the source of the largest amount of very fine fleece of any alpaca in our herd. Decision day is on April 27th when we will be shearing the animals. What to do?

Meanwhile, today is "pi" day (3/14). So to celebrate I baked this razzleberry pie from my brother-in-law, Tom's famous recipe given to him by a lovely woman named Marie;-) 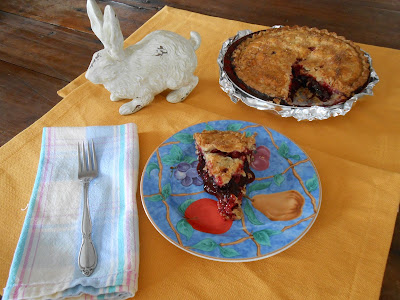