It's hard to believe that I have been living in the country with a genuine farm boy for fourteen years and have not driven one of the tractors until today. Although the tractors that we have out here are vintage 1950's tractors and not the huge modern ones, they were just big and noisy enough that I felt intimidated by them. Last week Rich's uncle, Alan, delivered to us the much smaller IH Farmall Cub that had been his grandfather's garden tractor. Once I saw our granddaughter, Olivia, perched up in the driver's seat I became determined that I would learn to drive it, too.  So this afternoon Rich fired her up and gave me my first lesson. 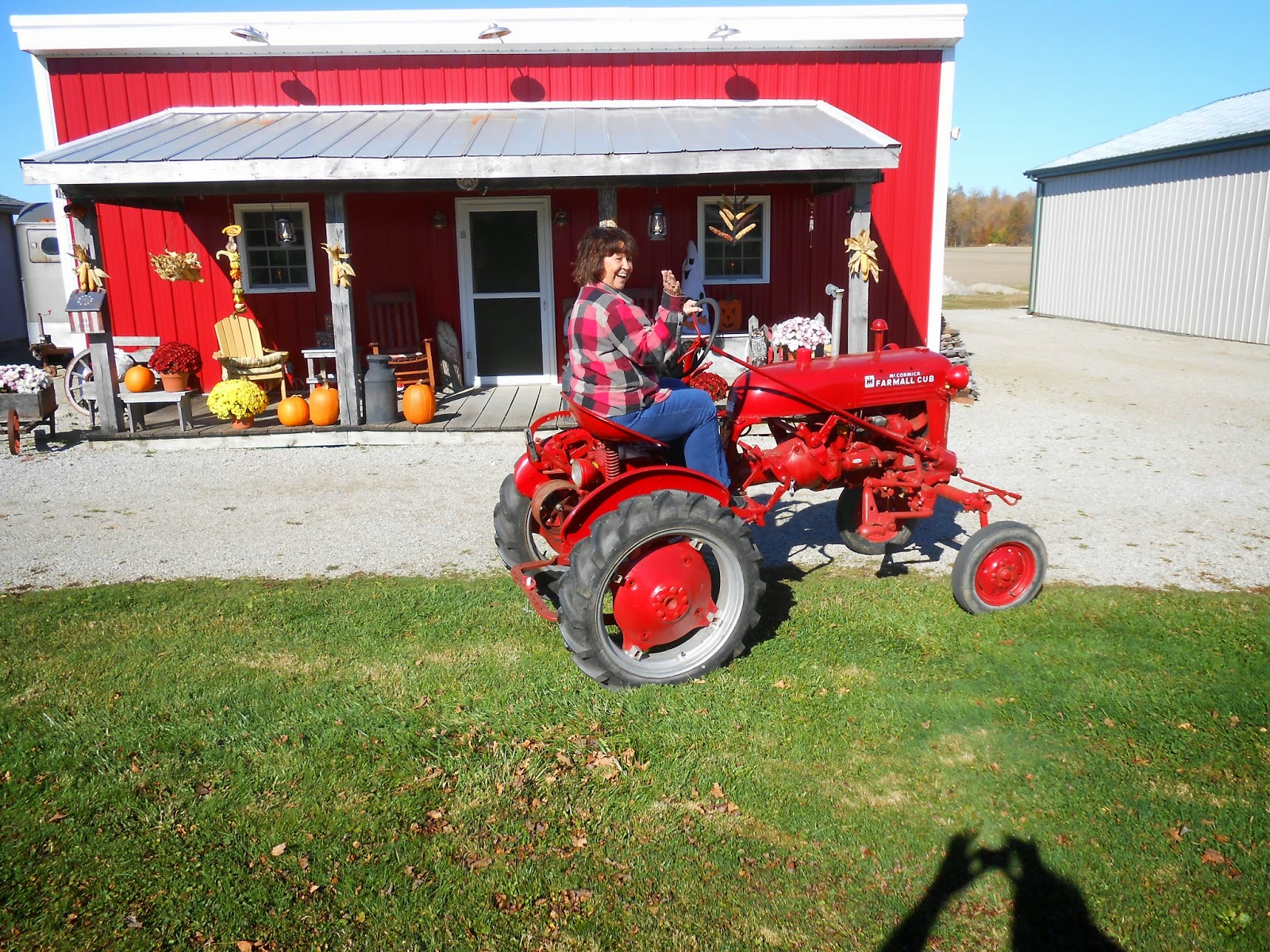 I puttered all around the property in first gear, going at the speed of a snail before Rich decided that it was safe for me to put her in second gear and whiz along at 5 miles per hour! You can see his shadow in the foreground as he strolls alongside me  beside me snapping pictures.

On another totally unrelated topic, Mango is expecting another baby. Apparently Nikko is going to be a natural at this breeding thing. He impregnated Took on his second ever attempt and managed to do the same to Mango on the first time. When we put her into his area yesterday for the behavior test she did everything in her power to turn him away. She ran back and forth, spitting and twisting to avoid having him touch her. When I accidentally released the two of them from the confined space that we use for breeding and out into his private pasture, she circled round and round, and back and forth in an effort to keep him away. When I opened the gate to the female pasture she sped in and seemed relieved when I slammed the gate blocking him out. Since she willingly kushed for him two weeks ago this behavior is a pretty sure sign that she is with child. Now we wait two more weeks and put Leezza through the same behavior test and hope that Nikko had success with her. Rich keeps threatening to buy Nikko a silk smoking jacket and a box of cigars and has started calling him Nikko Suave!

We had a small get together last night for a really fun group of people that Rich used to work with...another cider tasting party. Whenever we see these friends we laugh so hard that my sides ache and that's what happened last night. I always look forward to dining out or partying with them. 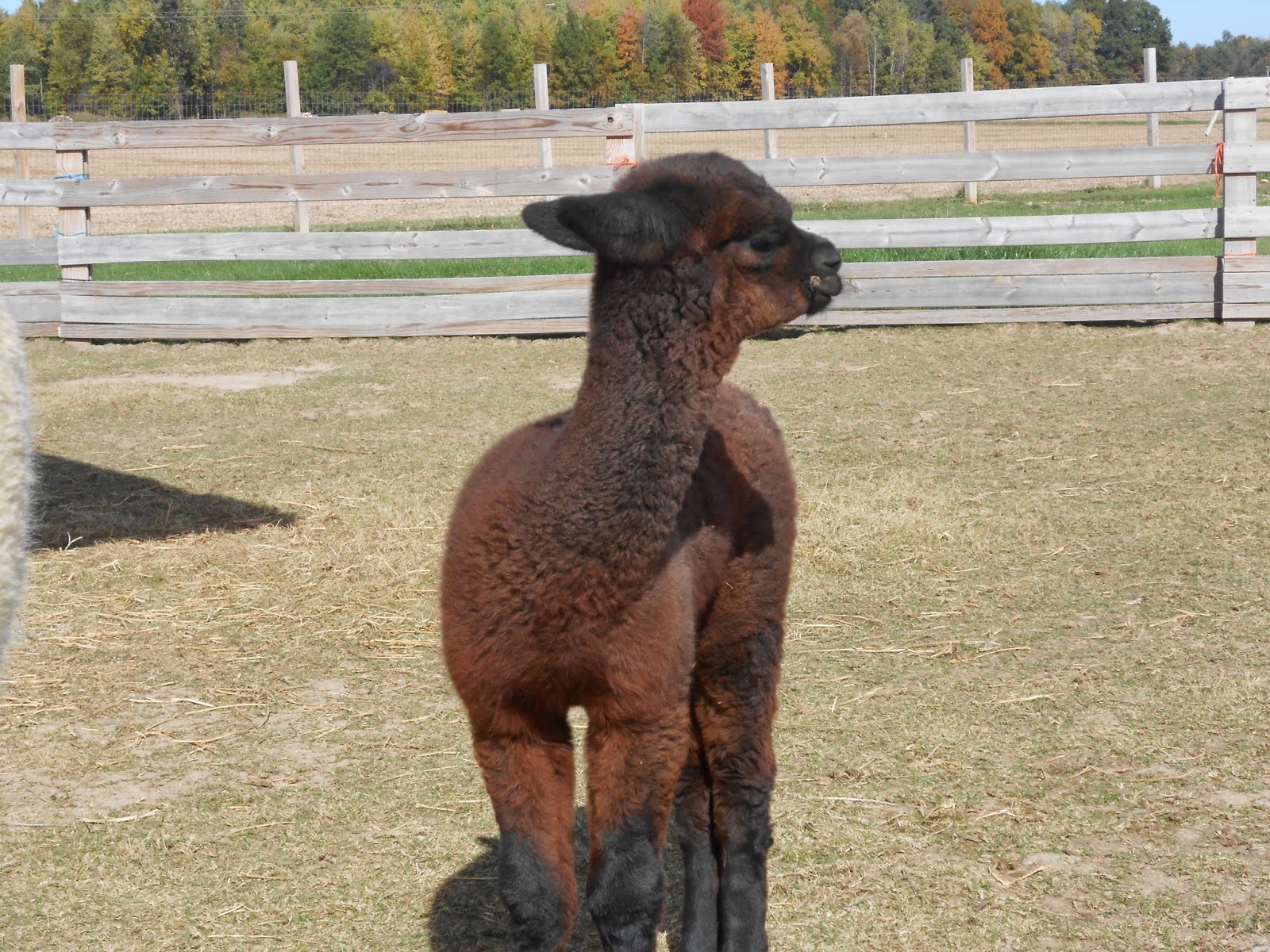 Little Mocha Latte is growing so fast. Last week he weighed 30 pounds already! He has doubled his birth weight. He is due for another CDT shot which we will administer this evening when we go out to check their food and water. Mocha man is getting less timid and more curious about visitors to the farm. My friend Marilyn is so determined to get him to eat out of her hand that she threatens to set up a chair in the pasture and wait him out. I can easily see this happening sometime soon since he seems to enjoy entertaining our visitors with his antics as he walks near to people at the fence and then just as suddenly twists sideways and pronks away, teasing them.

These beautiful, sunny and cool October days are coming to an end and November is right around the corner with its typical gray, cloudy skies. That means the holidays are not far behind. We are doing Thanksgiving at home this year with Amy, Steve, Olivia, Max and our friend and Steve's grandmother, Treva. I have started planning the menu. Looking forward to Christmas, I have been furiously knitting small gift projects for the family. Our daughter, Susie, and granddaughter, Zaidee, already have their tickets to Ohio. We haven't seen them for almost two years. The holidays should be seriously jolly this year since I am getting the gift I love most...my kids all in one place at the same time.
Posted by Buckeye Star Alpacas at 12:57 PM