Remember how, for the past two weeks, I have been afraid to leave home for any length of time during the daylight hours because that's when alpacas generally have their babies? And remember how Mango just kept getting bigger and bigger and showing imminent signs of labor; kushing with her legs to the side, eating constantly, and just generally lolling around. Two days ago she was even foaming at the mouth a bit as if she was in distress. One of the websites I read says that this means labor could happen "today, tomorrow or two weeks from now." This  lulled me into a false sense of security, so that today I ventured out to buy groceries. Mango was grazing with the rest of the girls and seemed to be acting normal. The pantry and fridge were getting low on stock and I thought I'd be safe runing out for an hour or so. Wrong!

As I pulled into the driveway upon my return this is the sight that met my eyes: 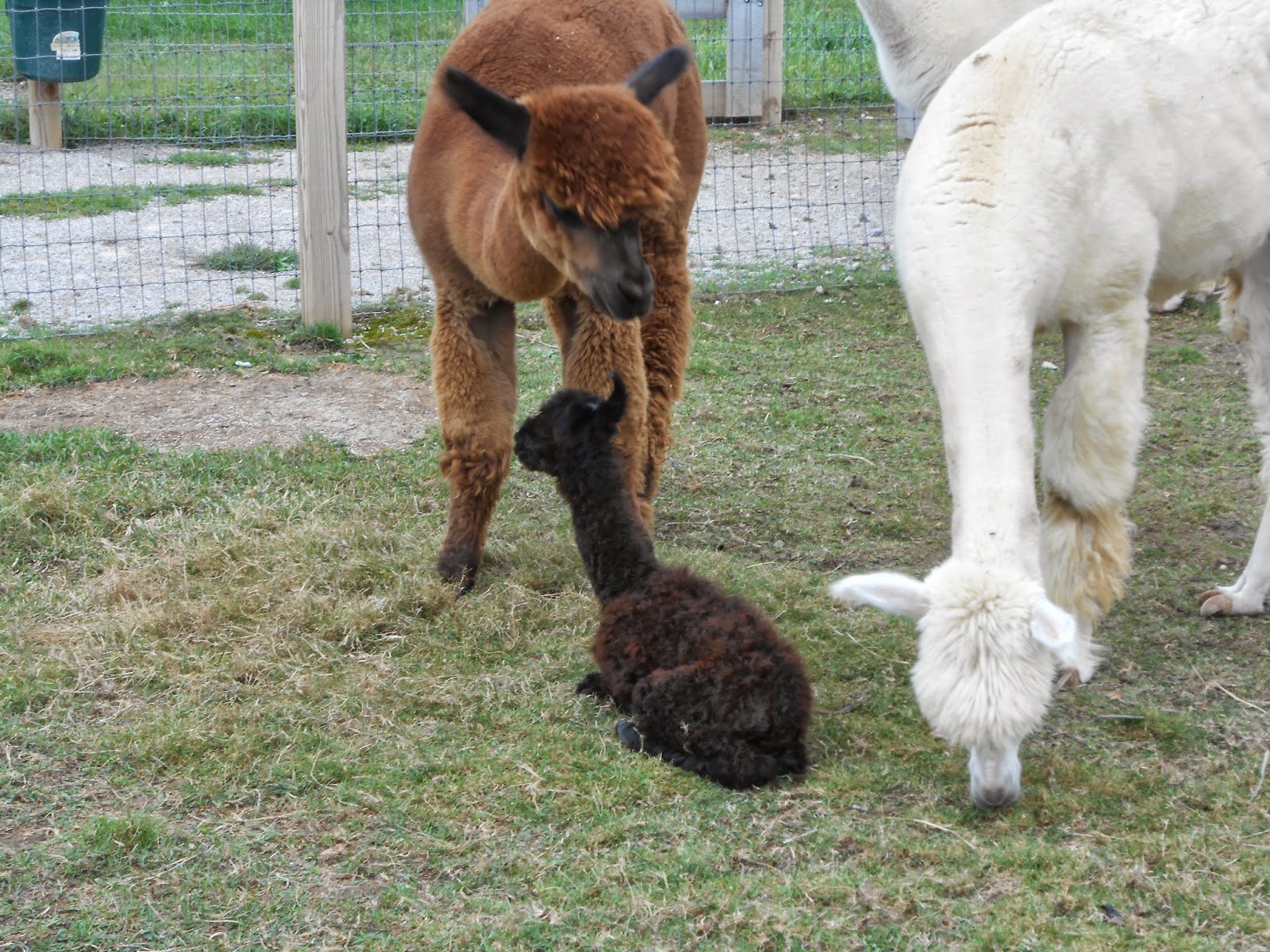 Mango was grazing calmly beside a wet, little, black cria while Leezza sniffed curiously at the new arrival. I rushed my groceries inside, changed my shoes, threw on one of Rich's big sweatshirts and loaded the pockets with my camera, cell phone and the keys to the shop where I have the cria kit stored. I unlocked the shop and shoved Callie inside, grabbed the clean towel and rushed out to the pasture.

The little guy was still partially covered with the birth membrane and was shivering. Since Mango had not yet passed the placenta I figured that the birth must have occurred within minutes of my arrival. I rubbed him down good and picked him up in my arms. After my mistake with Asterius last year, I immediately up ended the baby to check the sex. Another boy! Though we had hoped for a girl, its impossible to be disappointed when you're holding a curly, warm, fresh cria in your arms and he is lustily "maaa-ing" for his first meal. 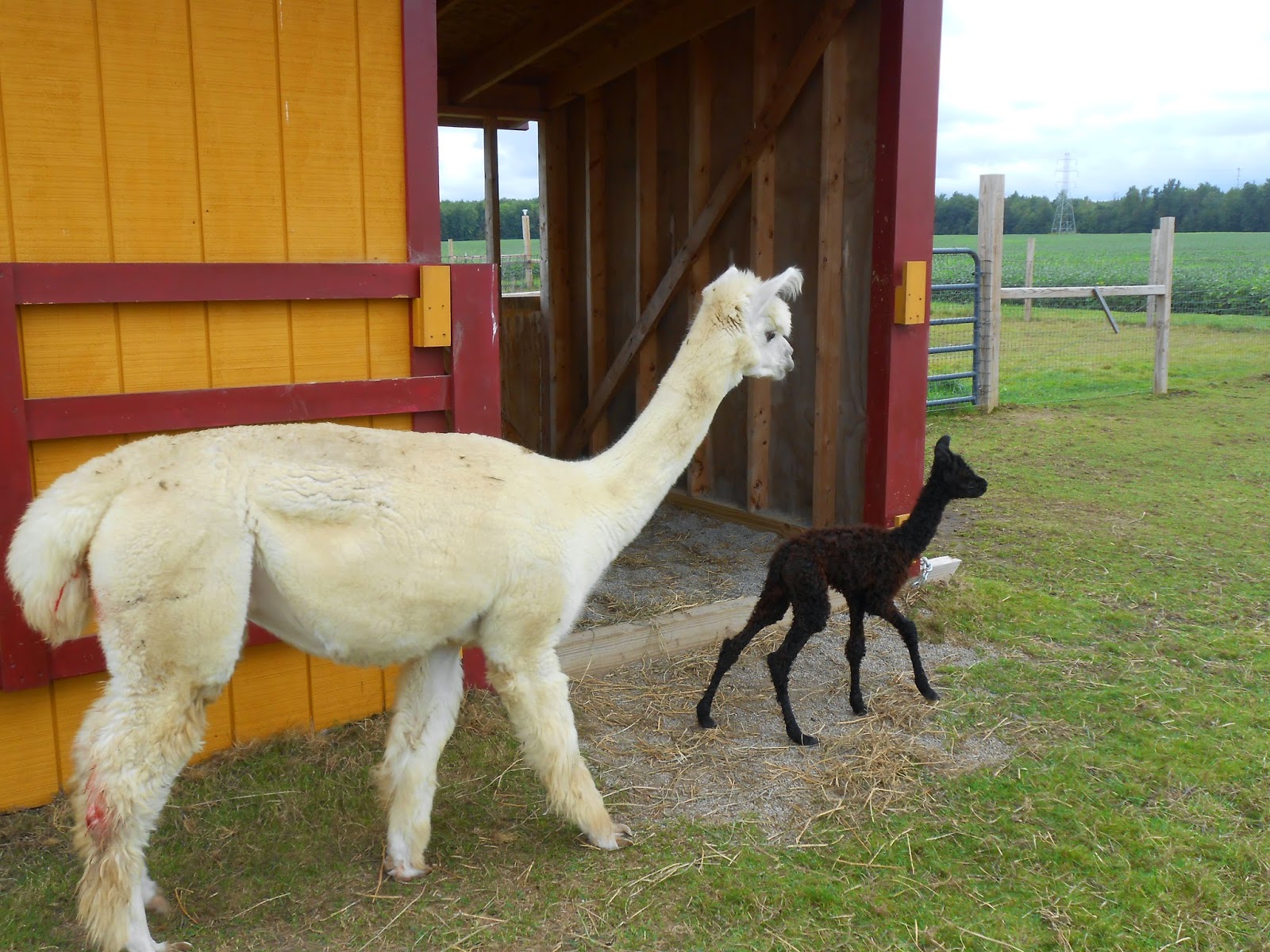 I set him back down near Mango where he attempted to stand on his own. After a couple of prat falls and nose dives, he got the feeling in his legs and began to wander around exploring the pasture! This feisty little guy had not even eaten his first meal yet before his curiosity got the better of him and he felt the need to look around. He wandered to the fence to make friends with Nikko, and then to the other side to make friends with Brutus and Asterius. 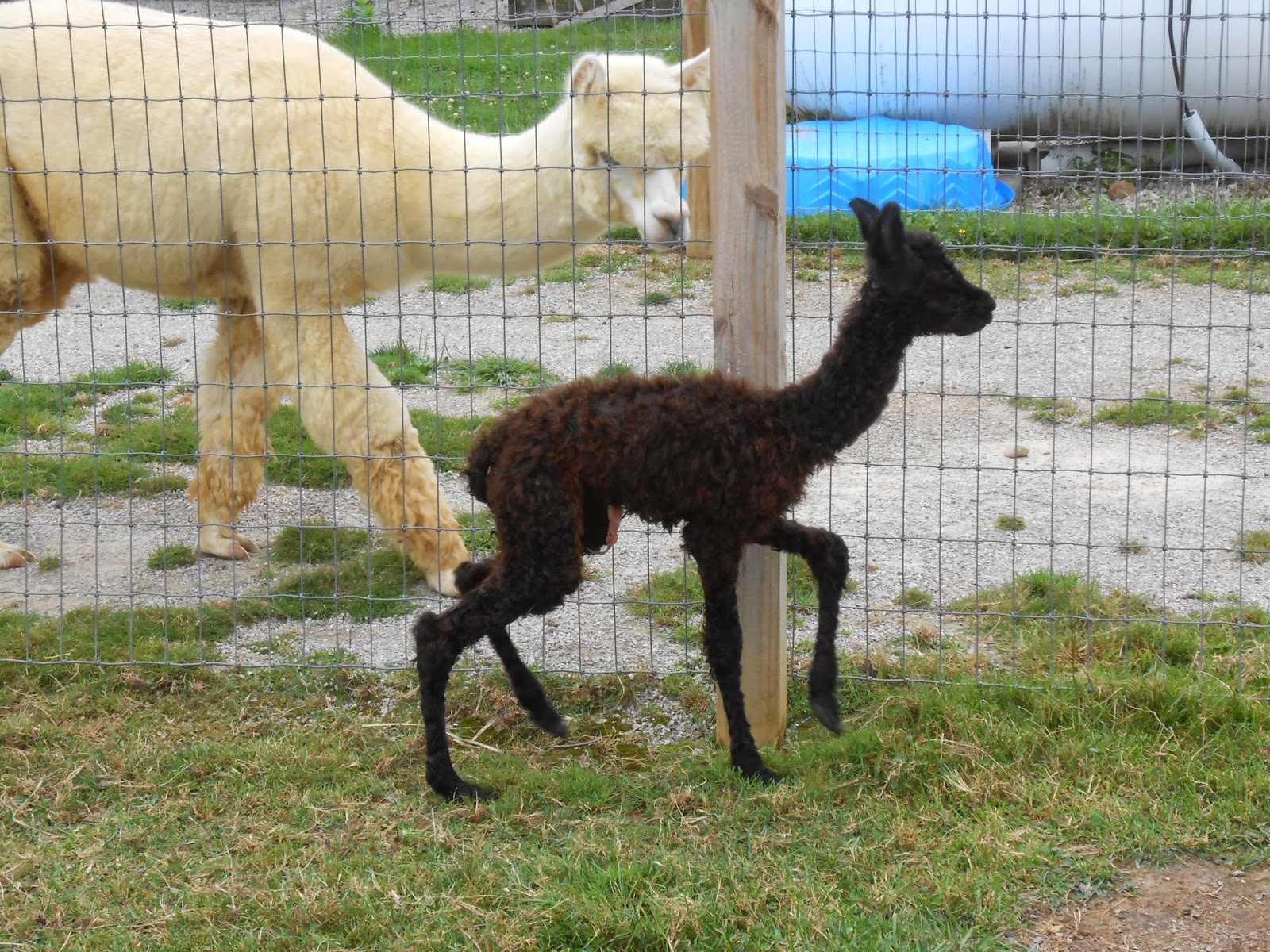 His Aunt Leezza seems to be the most interested in her little nephew. She constantly sniffs and prods at him with her snout. Mama Mango is always nearby making the throaty, clucking sound that they use to communicate with their new baby to let them know that mama is at hand. 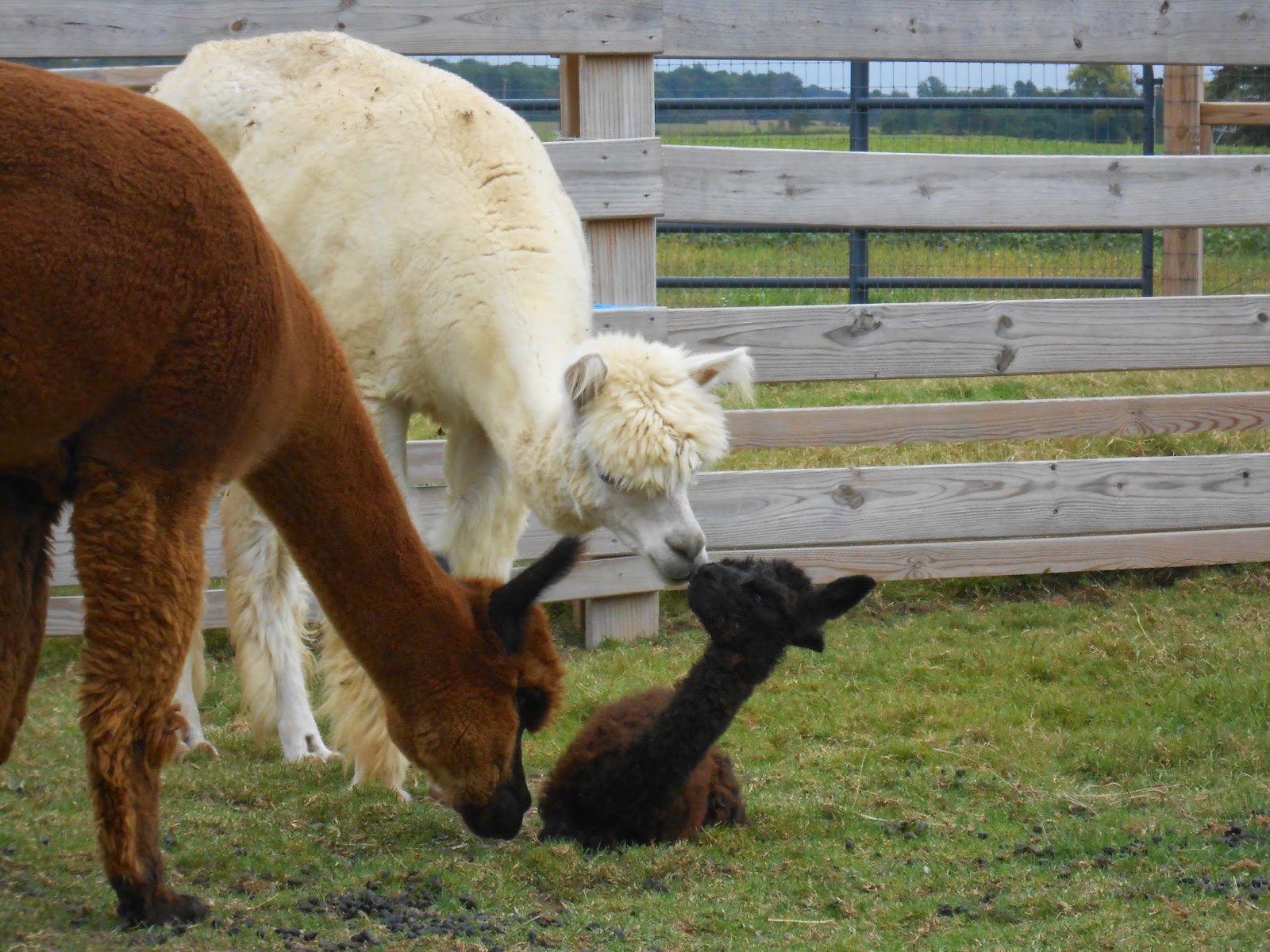 After much prodding and poking about beneath his mother, the little guy began nursing heartily enjoying his first lunch tucked under his mama. 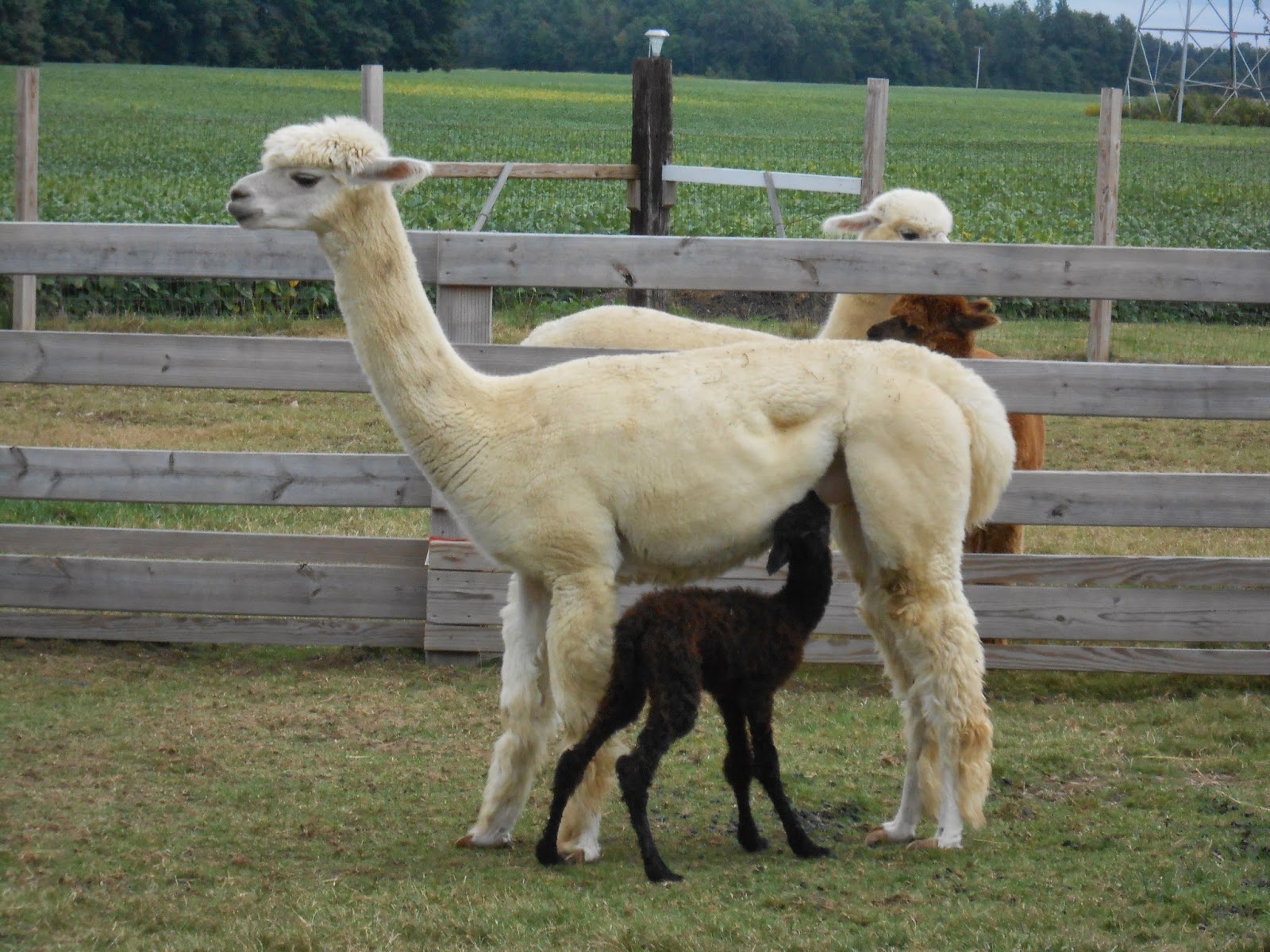 Little guy was born at 11:20 am today and by the time he was two hours old he had already had three visitors. Once I was satisfied that everything in the pasture was ok, I made a couple of phone calls to friends who had demanded that I let them know as soon as Mango delivered. My brother-in-law, Danny, who lives down the road stopped by, as he has done nearly every day for the past two weeks. He was surprised to see the new addition. Shortly after he left,  Myron and Rhonda, who own the little guy's father, Black Night, came up after lunch to see him. While they were still there, my friend, Liz, pulled into the driveway. Myron picked the little guy up and the three of us women coo-ed and patted the adorable little guy.

I texted Rich a picture right away, of course. He'll be home from work shortly, excited to meet the new member of our farm family.

Be sure to check back each day for progress updates. They grow and change so quickly the first few weeks.
Posted by Buckeye Star Alpacas at 12:56 PM